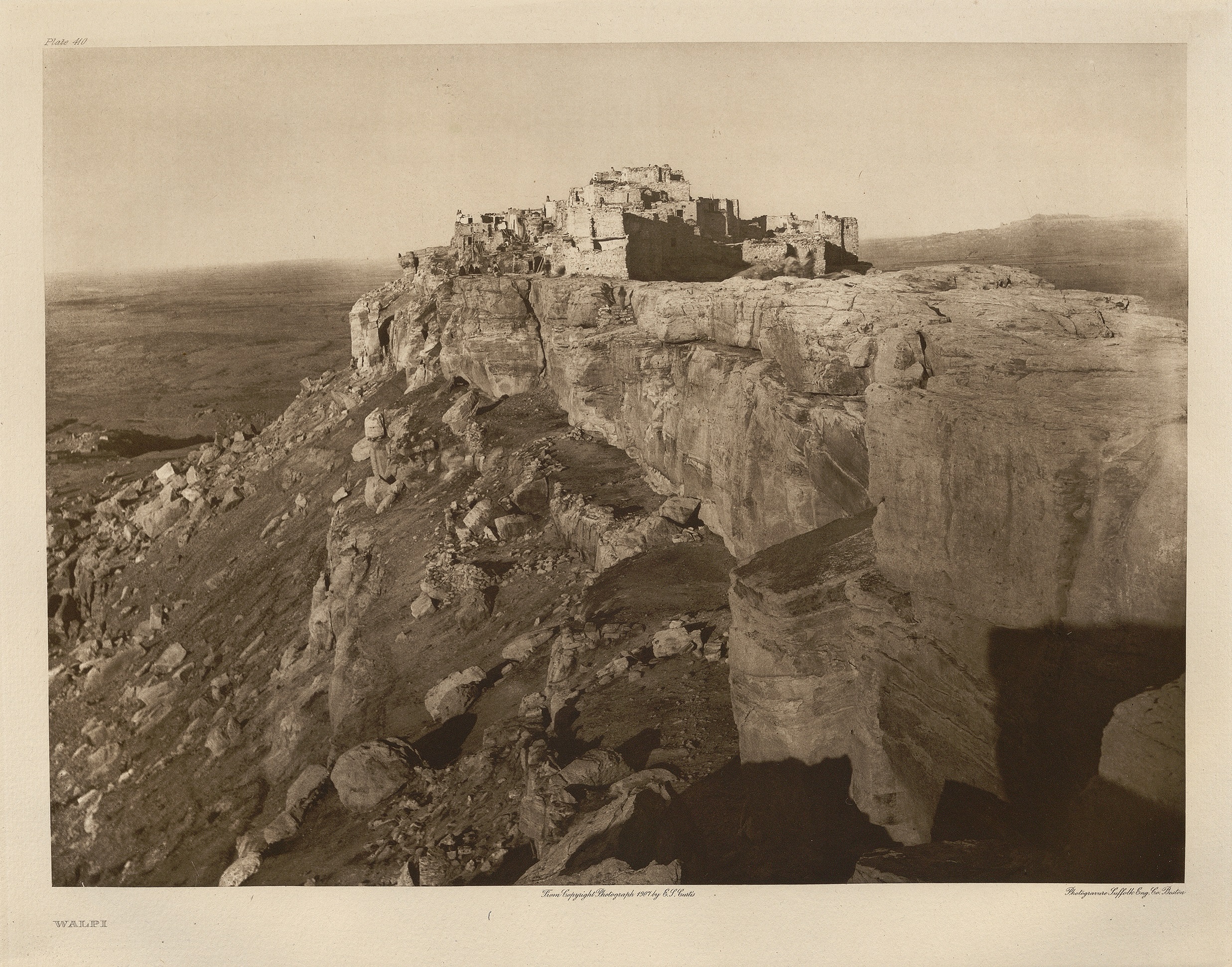 Picturesque Walpi, perched on the point of a rocky island in a sea of sand, is an irregular, rambling community-house, built without design, added to in haphazard fashion as need arose; yet it constitutes a perfectly satisfying artistic whole.

The Stairway Trail at Walpi 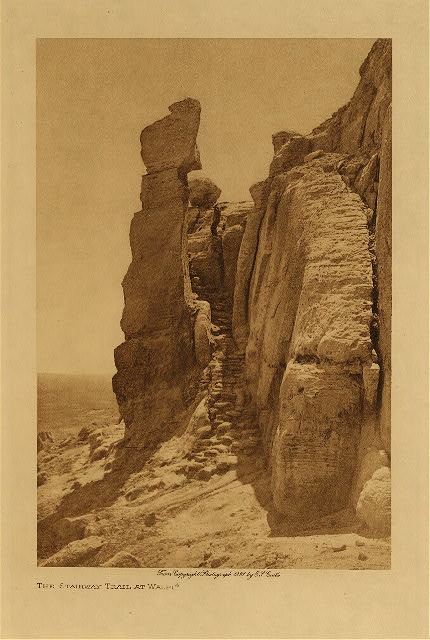 Edward S. Curtis on the Hopi of Walpi

The Hopi of Walpi

To collecting the data and making the pictures for this volume far more than the usual time has been given.  My first visit to the villages of the Hopi was in the year 1900, at which time a substantial number of the pictures were made.  I again visited these interesting people in 1902, and further work was done during the years 1904, 1906, 1911, 1912, and 1919.  It is most fortunate that a great many of the pictures were obtained so long ago; for, conservative as these people are, there has been a great change in their mode of life, hence many of the photographs here presented could not have been made in more recent years.  It should be noted that the copyright dates do not always coincide with the year in which the photographs were made.

Walpi, the best-known village of this group, received first consideration in conducting the investigation, and all statements not specifically referring to other villages may be considered as applying to this pueblo…

The Hopi are without doubt among the most interesting of our surviving American Indians, and one of the very few groups recently living in a state similar to that of a hundred years ago.  For the anthropologist the complexity of the ethnic elements that in the last three and a half centuries have combined to produce the modern Hopi, and the astonishing richness of their religious ceremonies, present a field crowded with opportunity.  Artist and traveler are invariably entranced with the picturesque desert environment of the Hopi, with their ancient, many-storied, cliff-perched pueblos, their dramatic dances and artistic ceremonial costumes, their pleasing pottery and basketry, and no less pleasing manners.

They call themselves Hópitu, the Peaceable People, and peace-loving they have always been.  True, their history contains pages darkened with the annals of warfare, but their military activities were invariably either for defence of their fields and flocks from the forays of Ute and Navaho, or what they conceived to be just punishment visited upon some component members of the nascent Hopi people.  Affability and sunny disposition are apt to be one’s first impression of the dominating traits of Hopi character, at least at Walpi, the goal of most Caucasian visitors.  Presume on this affability, and you encounter cold reserve, ill-concealed disapproval, or outspoken resentment.  The Hopi can be persuaded and led, if you convince his reason; failing this, you will hardly drive him.  More than once in his relations with the Government he has shown that force and authority have no terrors for him when he believes himself unjustly assailed.  Numerically weak, poor in worldly goods, physically small, he possesses true moral courage.