From Geronimo's Story of His Life

On the Apache Homeland in Arizona

…There is a great question between the Apaches and the Government.  For twenty years we have been held prisoners of war under a treaty which was made with General Miles, on the part of the United States Government, and myself as the representative of the Apaches.  That treaty has not at all been properly observed by the Government, although at the present time it is being more nearly fulfilled on their part than heretofore.  In the treaty with General Miles we agreed to go to a place outside of Arizona and learn to live as the white people do.  I think that my people are now capable of living in accordance with the laws of the United States, and we would, of course, like to have the liberty to return to that land which is ours by divine right.  We are reduced in numbers, and having learned how to cultivate the soil would not require so much ground as was formerly necessary.  We do not ask all of the land which the Almighty gave us in the beginning, but that we may have sufficient lands there to cultivate.  What we do not need we are glad for the white men to cultivate.

We are now held on Comanche and Kiowa lands, which are not suited to our needs---these lands and this climate are suited to the Indians who originally inhabited this country, of course, but our people are decreasing in numbers here, and will continue to decrease unless they are allowed to return to their native land.  Such a result is inevitable.

There is no climate or soil which, to my mind, is equal to that of Arizona.  We could have plenty of good cultivating land, plenty of grass, plenty of timber and plenty of minerals in that land which the Almighty created for the Apaches.  It is my land, my home, my father’s home, to which I now ask to be allowed to return.  I want to spend my last days there, and be buried among those mountains.  If this could be I might die in peace, feeling that my people, placed in their native homes, would increase in numbers, rather than diminish as at present, and that our name would not become extinct.

I know that if my people were placed in that mountainous region of the Gila River they would live in peace and act according to the will of the President.  They would be prosperous and happy in tilling the soil and learning the civilization of the white men, whom they now respect.  Could I but see this accomplished, I think I could forget all the wrongs that I have ever received, and die a contented and happy old man.  But we can do nothing in this matter ourselves---we must wait until those in authority choose to act.  If this cannot be done during my lifetime---if I must die in bondage---I hope that the remnant of the Apache tribe may, when I am gone, be granted the one privilege which they request---to return to Arizona.

…Gen. Nelson A. Miles was assigned the task of finally subduing the Apache, which was consummated by the recapture of Geronimo and his band in the Sierra Madre in September, 1886.  These hostiles were taken as prisoners of war to Florida, later to Alabama, and thence to Fort Sill, Oklahoma, where, numbering 298, they still are, living as farmers in peace and quiet, but still under the control of the military authorities. 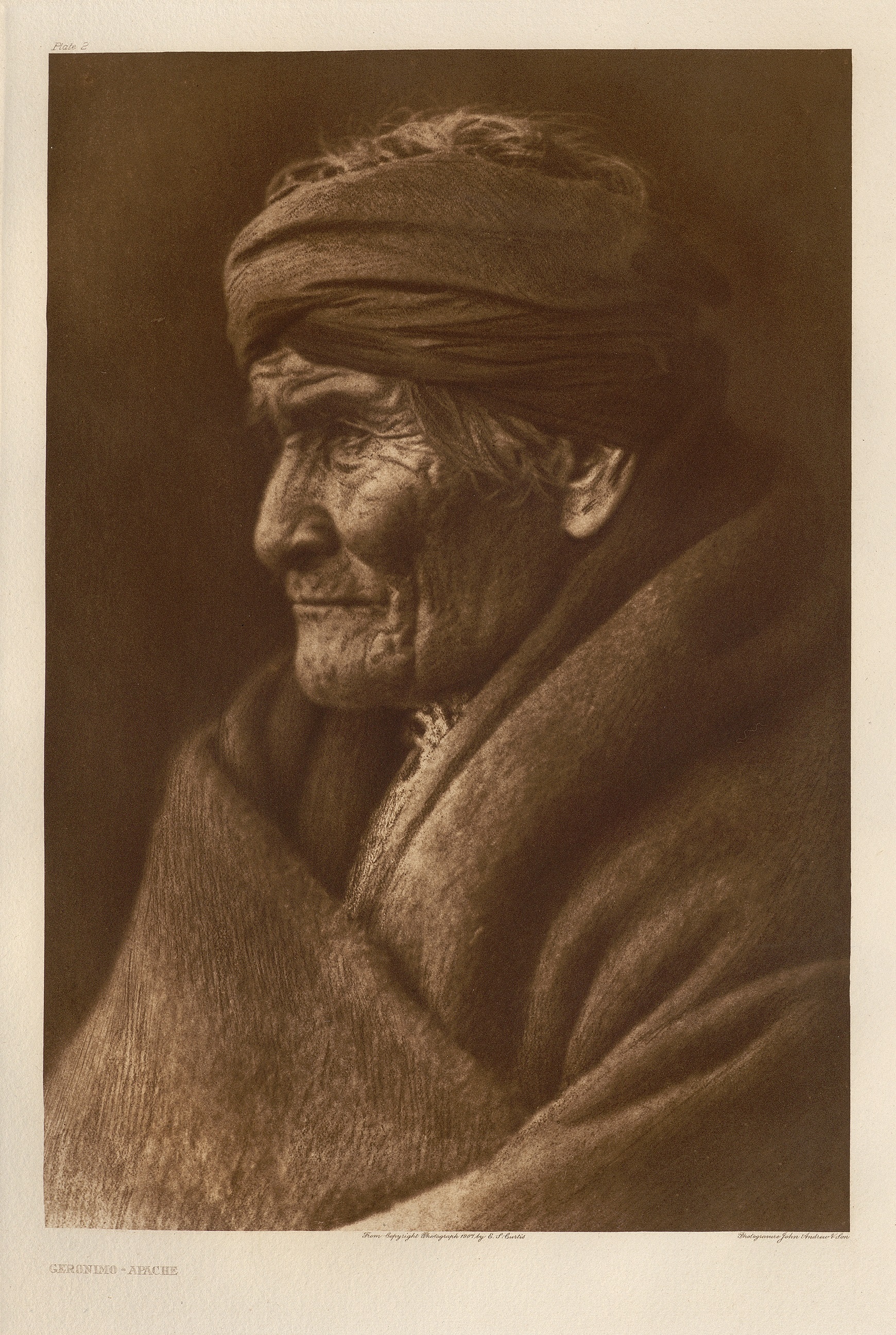 This portrait of the historical old Apache was made in March, 1905.  According to Geronimo’s calculation he was at the time seventy-six years of age, thus making the year of his birth 1829.  The picture was taken at Carlisle, Pennsylvania, the day before the inauguration of President Roosevelt, Geronimo being one of the warriors who took part in the inaugural parade at Washington.  He appreciated the honor of being one of those chosen for this occasion, and the catching of his features while the old warrior was in a retrospective mood was most fortunate.