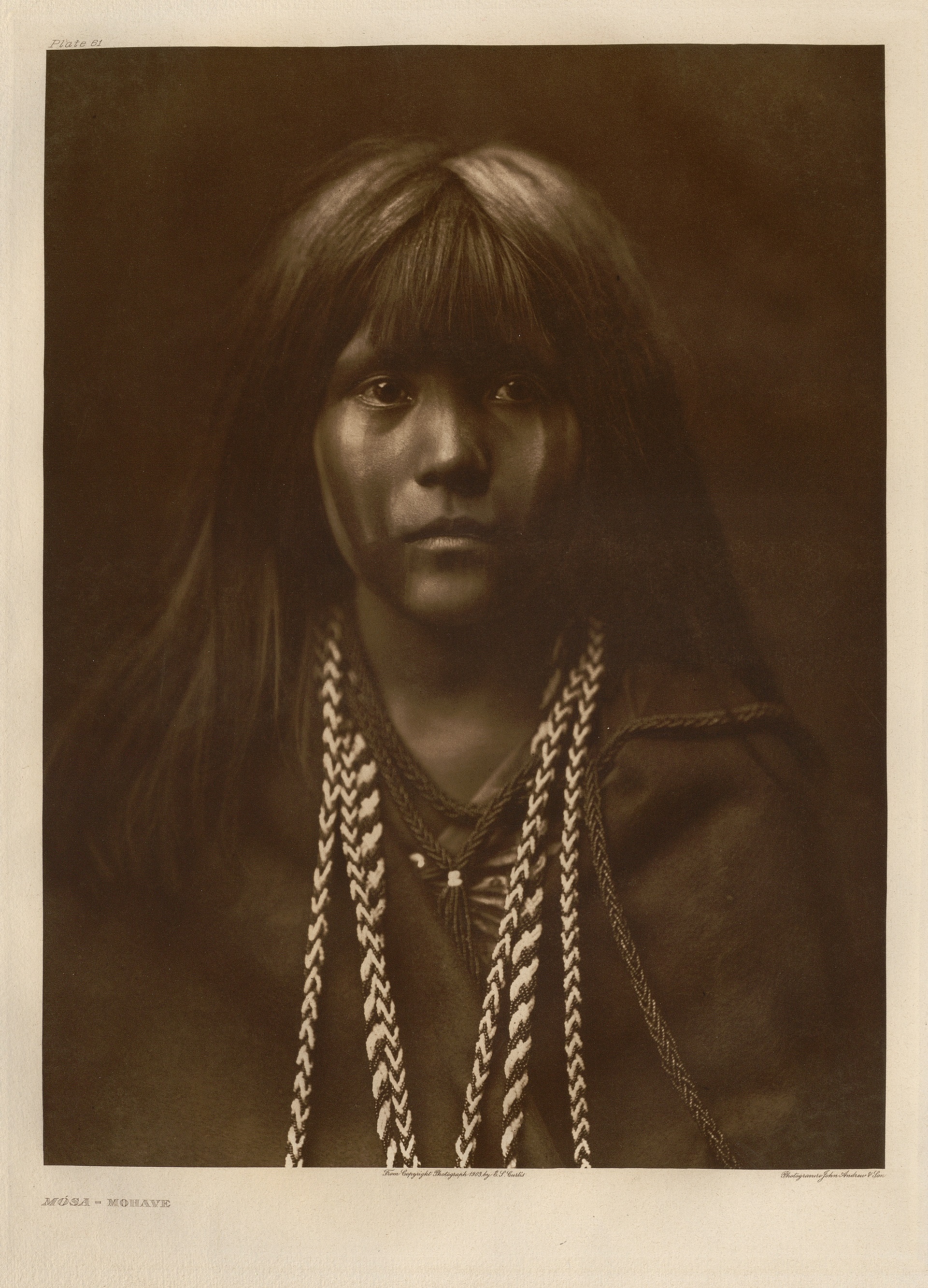 It would be difficult to conceive of a more thorough aboriginal than this Mohave girl.  Her eyes are those of the fawn of the forest, questioning the strange things of civilization upon which it gazes for the first time.  She is such a type as Father Garces may have viewed on his journey through the Mohave country in 1776.

A barren earth and a sunless sky came together, begetting gods and people.

Such, according to the myth, is the genesis of the Mohave, one of the principal branches of the Yuman family, possibly the parent people of the stock.  Study of their myths and cult soon tells us that, compared with such other groups as the Navaho, the Pueblos, and the Plains tribes, their life is quite barren of ceremony and ritualism.  Their home is now, and was in traditional times, on the banks of the Colorado river, an environment into which they have so fitted themselves that they seem to have been always a vital part of it.  To describe the Mohave without first speaking of their river would be like telling of the Makah of wind-swept Cape Flattery without alluding to the sea that beats the sands at their very feet.

The Colorado is a river like unto no other.  Even the murmur of its waters in their never-ceasing flow to the Southern sea is unlike the sound of other streams.  Others tell of clear brooks, grass-grown, pebble-strewn.  One reverts to the waters of the Mississippi and the Falls of Saint Anthony; the green, translucent flow of the Hudson; the beautiful Columbia, fed from snowy mountains, and a hundred others; but the Colorado is one unto itself.  To look upon its yellow surface and hear its low, sullen lap as its silt-laden waters flow by, is to think of a river of paint.  For five hundred miles, gathering tribute from the rock-walled gorge, it winds its deep and mighty course through the desert.  In watching its forceful flow one forgets that it was born as other rivers; forgets the countless meadow and mountain brooks that contribute to its making; forgets the song of birds, and sees only its relentless, devouring strength.  Stand on the last precipice overlooking the chasm of the Colorado Cañon, watch the waters beat and lash themselves about in their mad rush to be through and out of this grewsome rift in the earth, and to one comes the thought that though this may have been born as other rivers, in passing through these awful depths its very life and soul have been transformed:  it has emerged broken in spirit and laden with a wearying burden.

The hour is the end of day; its spell is over the earth. The sun in a sea of gold and crimson is sinking behind mountain crests of copper hue; the shadows are creeping stealthily across sierra, valley, and plain; motionless our giant bronze Mohave is watching the scene as his forefathers for generation after generation watched the same sunsets and the same river flow.  Does the gorgeous coloring of yonder clouds, the current of the stream, and the spell of the hour mean anything to him?  Perhaps far more than we dream.  Ask him, he could not tell; but take him from it and he would die of longing.