Observations on the Eskimo of King Island by Curtis

Edward S. Curtis on the Eskimo of King Island

King Island, the home of the northern seacliff-dwelling Eskimo, is barely a dot in [the] Bering sea.  It is almost at the entrance of Bering strait, and lies about ninety miles northwest of Nome and fifty miles southward from Cape Prince of Wales.  It thrusts up its head from the depths, the sheer cliffs rising about seven hundred feet above sea-level.  Flat on top, about two square miles in area, the island resembles a huge stone cube.  This bleak, forbidding, rocky mass supports few varieties of growing things.  A mossy vegetation, low bushes, and berries grow among the rocks and on the flat top; birds flock, breed, and migrate by millions, dwelling, while occupying the island, in almost inaccessible rocky niches; walrus and seal are numerous, for King island is in the direct route of the north and south migrations of these mammals.  Berries are gathered, birds are caught, and seal taken; but the natives are primarily walrus-hunters, and it is the walrus that has attracted and held this small group of Eskimo to its inhospitable island.  At the south side there is a rock slide, with its talus extending into the sea.  This slide, not more than two hundred feet wide and scarcely less precipitous than the cliff itself, affords the only landing on the island for boat or canoe.  Few vessels call:  an occasional trading ship and the rare visits of the revenue cutter are about the only ones.  There is no protection from the sea, and the water is too deep for easy anchorage.

By the rock slide which serves as a trail, the inhabitants have erected a village of about twenty-nine houses, scattered irregularly on seven terraces, the lowest some eighty or a hundred feet about sea-level.  Owing to the sheerness of the cliff, the dwellings are built on stilts.  The rear parts of the houses rest on poles a few feet high, or else are built against the cliff.  The fronts are attached to poles, well over twenty feet tall, which project above the roofs and, with horizontal connecting poles, serve also as drying racks.  On the pole framework the two-roomed house is built.  The façade of the habitation is set back about two feet from the long outer poles, in order that a platform or porch may extend the entire length.  The front room, about sixteen feet long, nine or ten feet deep, and six feet high, is of hewn or whipsawed planks; a wooden door opens to the platform or porch, and the roof is of walrus-hide tightly lashed down.  This portion of the house with its many shelves is used as a storeroom.

To the rear of the storeroom is the livingroom proper…

Of late years the Eskimo of King island have spent the midsummer months at Nome, leaving their village entirely deserted, except by the dogs, which remain on the island in numbers, subsisting on whatever they can hunt or on walrus carcasses left by the natives apparently for the purpose.  While continually fighting among themselves --- and woe betide the animal which leaves his own terrace to invade another --- the dogs, some of them splendid specimens, nevertheless were pitifully glad to see the members of the expedition, leaping, fawning, rolling underfoot, and in their joy upsetting the camera many times. 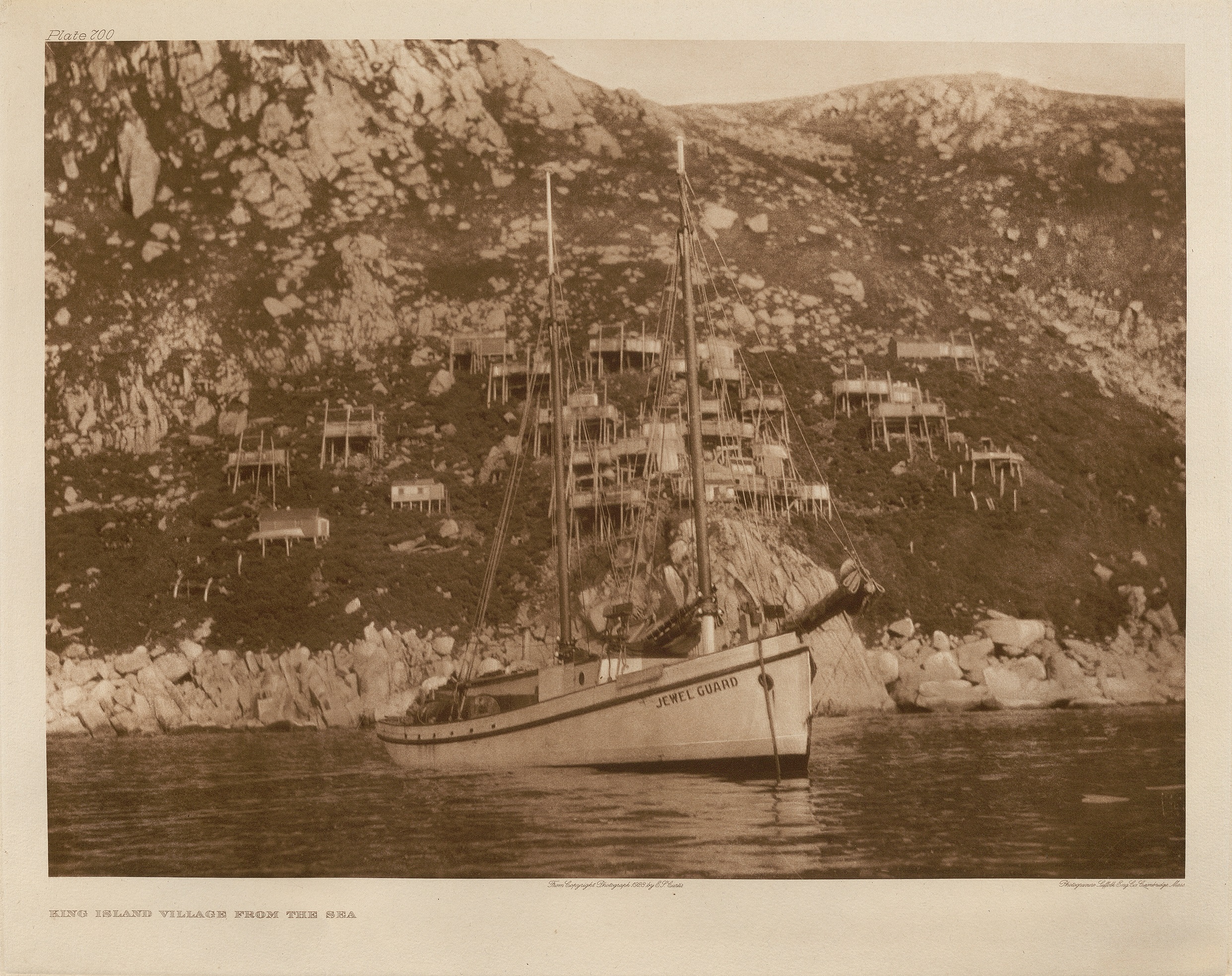 King Island Village from the Sea, 1928

The King Islanders occupy dwellings erected on stilts on the cliff side.

Looking to the Sea 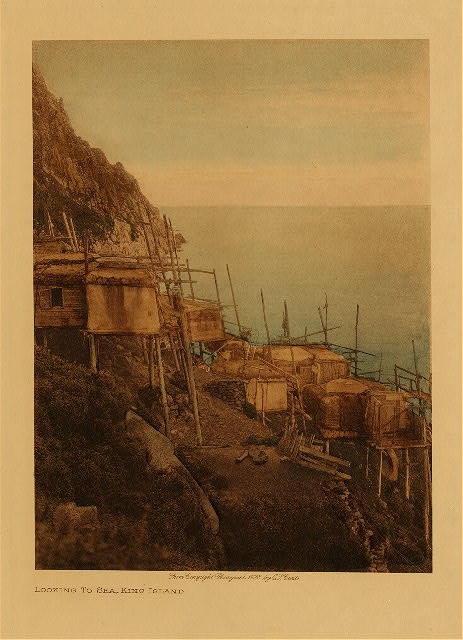