The Compleat Angler: And Other Meditations on the Art and Philosophy of Fishing, 15th Century to the Present: Rivers of Pennsylvania 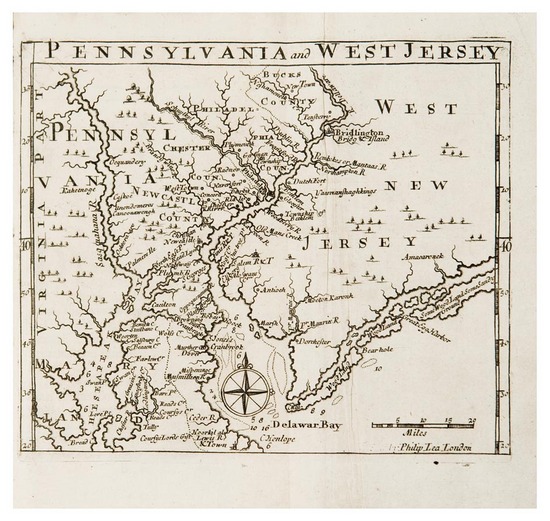 Gabriel Thomas may have been among the earliest English settlers to arrive in the colony of Pennsylvania in 1681.  He was a member of the Society of Friends, and resided in Pennsylvania and Western New Jersey until 1697, after which he returned to England and published his account of life in the colonies in 1698.  The very rare copperplate engraved map by Philip Lea, Pennsylvania and West Jersey, engraved and first published in the Hydrographia Universalis, or, A Book of Maritime Charts, circa 1696, illustrates Thomas’ work.  His observations include the native fish:

"…upon that Great and Famous River Suskahanah…  And for Fish, there are prodigious quantities of most sorts, viz. Shadds, Cats Heads, Sheeps-Heads, Herrings, Smelts, Roach, Eels, Perch.  As also the large sort of Fish, as Whales (of which a great deal of Oyl is made) Salmon, Trout, Sturgeon, Rock, Oysters, (some six Inches long) Crabs, Cockles, (some as big as Stewing Oysters of which are made a Choice Soupe or Broth) Canok and Mussels, with many other sorts of Fish…" 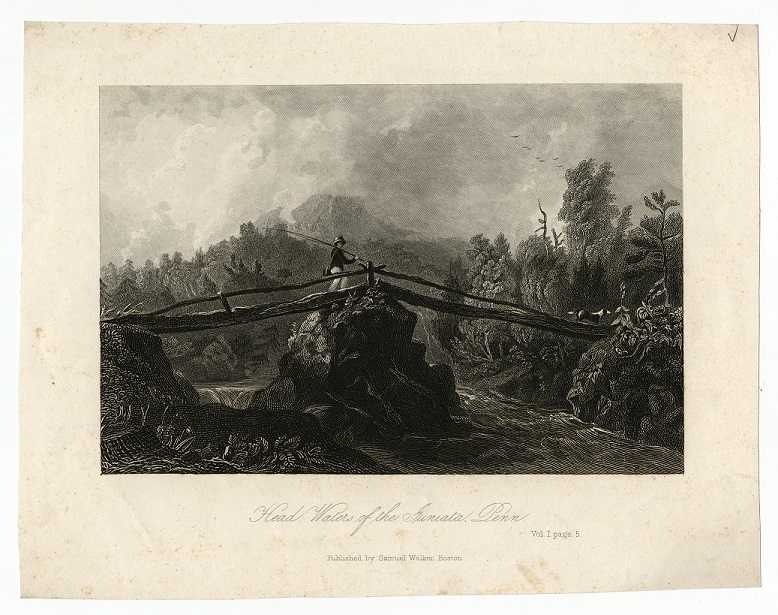 Thomas Cole, an English-born American landscape painter, was the founder of the Hudson River School of landscape painting, which embodied a romantic aesthetic of the landscapes of Pennsylvania, New York, New England, and the Hudson River Valley.  Cole traveled along the Juniata River and across the Allegheny Mountains of Pennsylvania between 1819 and 1823.  This engraving was first published in 1831 after the painting from the late 1820’s, which is now lost. 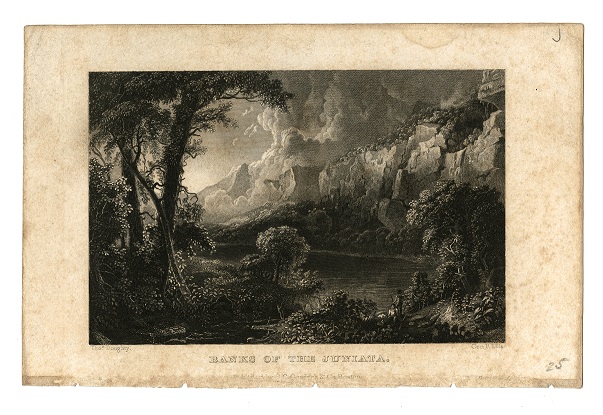 "…And now we have reached the valley of the Juniata.  A beautiful stream, and worthy of its fame!  It springs from the earth where the red deer gives birth to its fawn; it passes by the hunter’s cabin, springs over ledges of rock without number, sweeps through cultivated fields, tumbles over dams and turns every mill-wheel it happens to meet, usurps the business of the canal, and floats its heavily laden boats, mirrors a great number of hills covered with pine, maple and oak, as well as many farms, all richly cultivated; rushes under picturesque bridges, races with the canal, enriches broad meadows, where cattle are grazing and horses are playing; laves the threshold of rural cabins, with children sporting beside them in wild glee; yields its treasures to the fishermen, wears upon its bosom the most charming of islands, perpetuates in its color the emerald of summer, receives into its flood a hundred laughing brooks, teeming with trout, and finally waters a broad valley…" 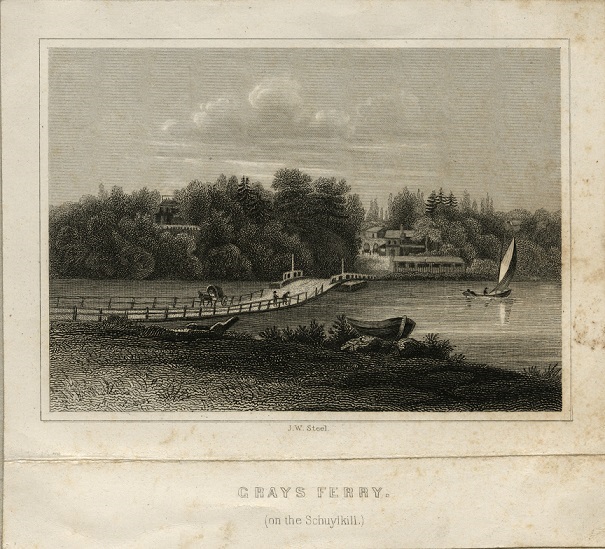 In the late 1820’s, the artist and painter George Lehman painted, engraved in aquatint, and hand-colored a series of views of Pennsylvania landscapes and towns.  James W. Steel first engraved this scene of Grays Ferry and the bridge over the Schuylkill River in Philadelphia from a drawing by George Lehman in 1828.