The Compleat Angler: And Other Meditations on the Art and Philosophy of Fishing, 15th Century to the Present: John Dennys 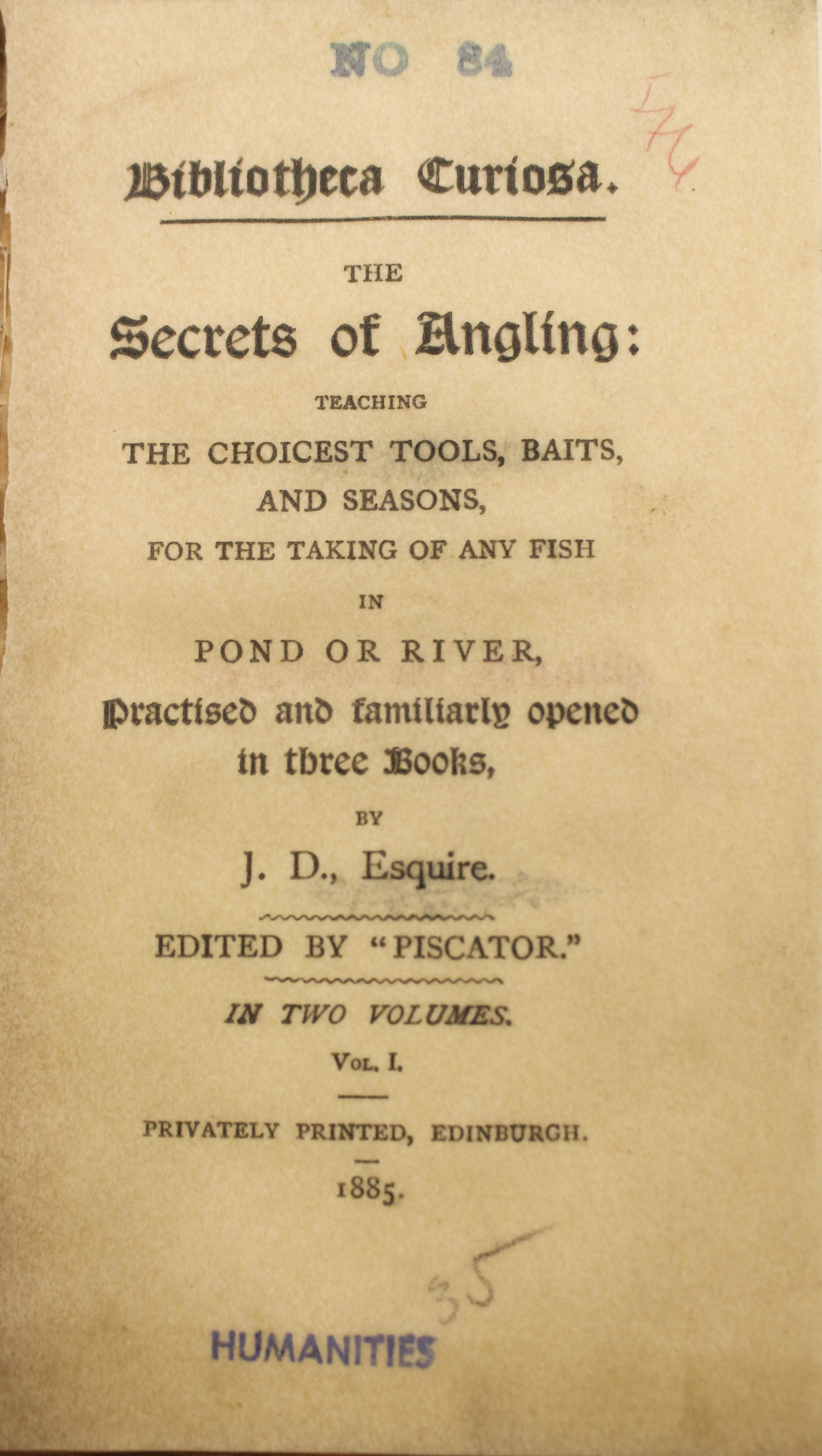 The Secrets of Angling, John Dennys, 1885

The Secrets of Angling

The Secrets of Angling was published in 1613 with the initials J. D. It was written by John Dennys and is the earliest surviving English poetical book on angling, with four editions published during the 17th century. Dennys wrote the work as a didactic pastoral poem in three books in the style of Virgil’s Georgics. The identity of the writer remained a mystery until 1811, when an entry listing Dennys as the author was discovered in the Stationers’ Register in London. The 17th century editions are among the rarest books in existence. Reprint editions were published throughout the 19th Century. 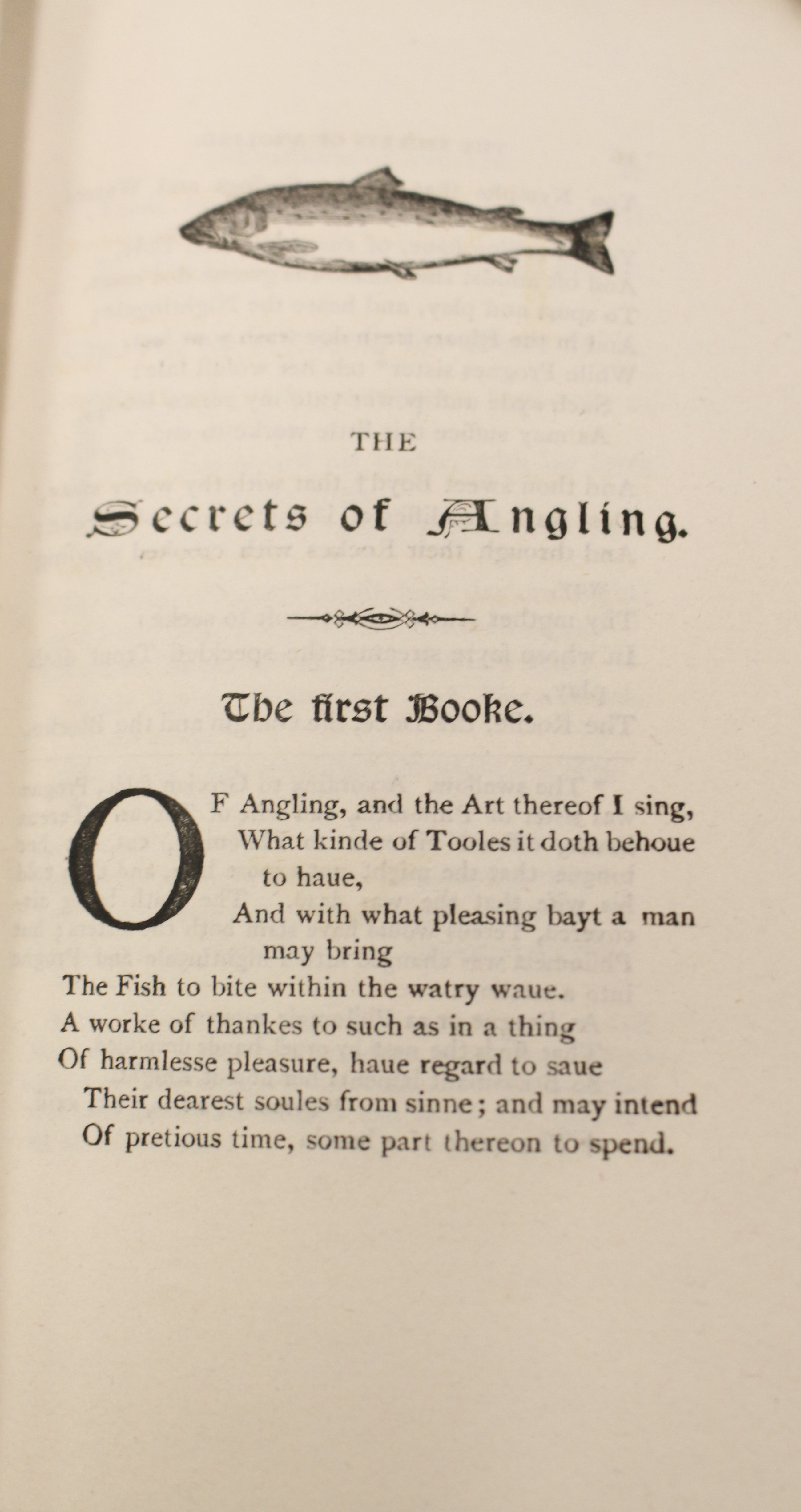 The Secrets of Angling, John Dennys, 1885

John Dennys, (d. 1609), poet, was the son of Hugh Dennys (d. 1559?) and Katherine (d. 1583), daughter of Edward Trye of Hardwick, Gloucestershire. He is known to have resided in the neighbourhood of Pucklechurch, Gloucestershire, in 1572 and was married to Elianor (or Helena), daughter of Thomas Millet of Warwickshire, with whom he had a son, Henry.

Dennys was author of The Secrets of Angling, the first extant fishing poem in English, which was published posthumously in 1613. Before the publication of Sir Henry Ellis's A Catalogue of Books on Angling (1811) and the investigations of Thomas Westwood and Canon Ellacombe, the author of Secrets was known only by the initials I. D. (from the title-page), which resulted in various attributions of authorship. Six stanzas of the poem (B7r–v) were quoted with inaccuracy of both text and authorship by Izaak Walton in The Compleat Angler (1653–76). In the first edition, the author is identified as ‘Jo. Da’. This error was absorbed into the text in the second edition (1655), and wrongly expanded to ‘Jo. Davors Esq.’ in the third edition (1661), as it remained in subsequent editions. Dennys's poem was prefaced by commendatory verses ‘In due praise of this praiseworthy skill and worke’ by ‘Jo. Daues’. This man was probably a relative of Dennys, whose great-grandmother was Agnes, daughter and coheir of Sir Robert Davers, Danvers, or Daues.

In The Angler's Sure Guide (1706), Robert Howlett ascribed The Secrets of Angling to ‘that great practitioner, master and patron of it [angling], Dr. Donne’ (Howlett, iii). Sir John Hawkins, who knew of the existence of Dennys's poem but had ‘never been able to get a sight of it’, was attracted to this particular attribution, but rejected it as erroneous (Walton, 152–3). Authorship was settled when the entry for The Secrets of Angling by John Dennys was found in the Stationers' registers (23 March 1613). The poem's reference to ‘sweet Boyd’, a brook fed by a rivulet that runs through the parish of Pucklechurch, provides collateral evidence for Dennys's authorship (Ellacombe, 1).

There seem to have been four editions of The Secrets of Angling between 1613 and 1652. In 1614 Gervase Markham published a prose paraphrase of the poem in The Pleasures of Princes, an appendix to The English Husbandman. Initially, Markham made no mention of his debt to Dennys; however, in later reprints (for example, Country Contentments, 4th edn, 1631) he acknowledged that this work was originally ‘written in a small Treatise in Rime, and now for the better understanding of the Reader, put into Prose, and adorned and inlarged’ (Poynter, 117–18; French, vi). Dennys's work proved popular in the nineteenth century, when extracts from it were frequently republished, with a new edition of the whole text published in 1883 by Thomas Westwood (reissued in 1970).

John Dennys died in 1609 and was buried at St Thomas's, Pucklechurch. The burial place of the Dennys family is at the upper end of the north aisle.

-Biography from the Oxford Dictionary of National Biography 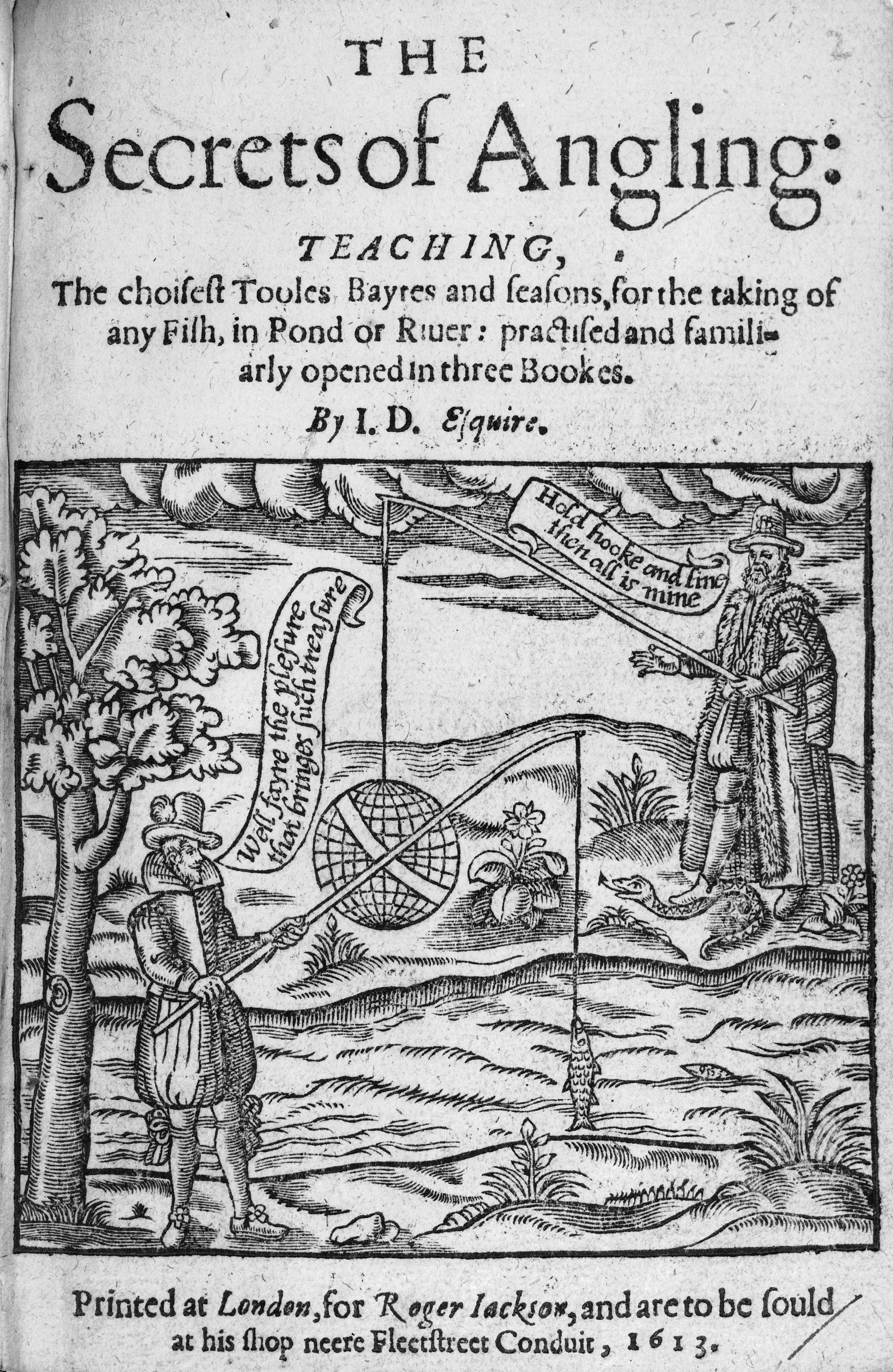 The Secrets of Angling, John Dennys, 1613 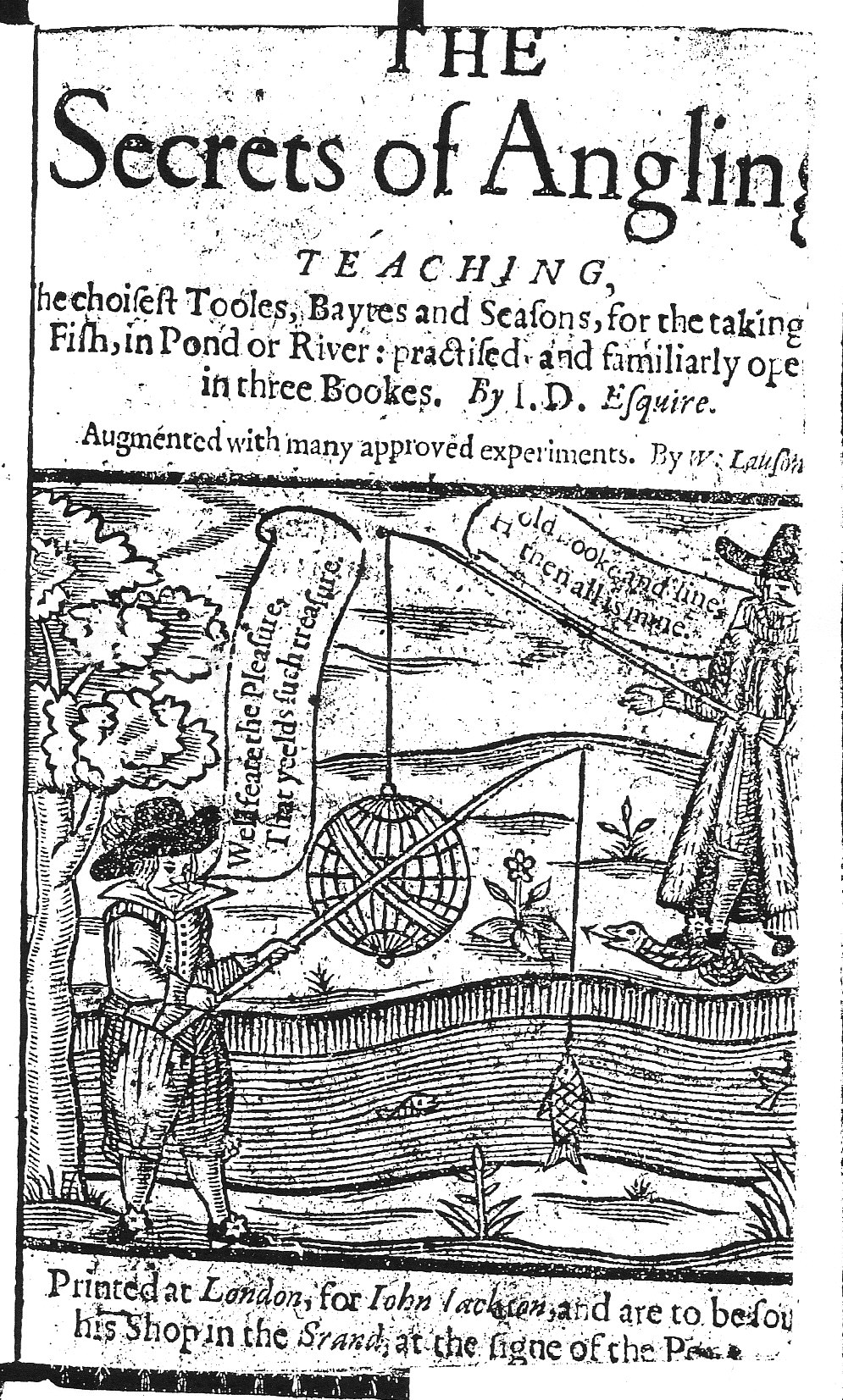 The Secrets of Angling, John Dennys, 1630 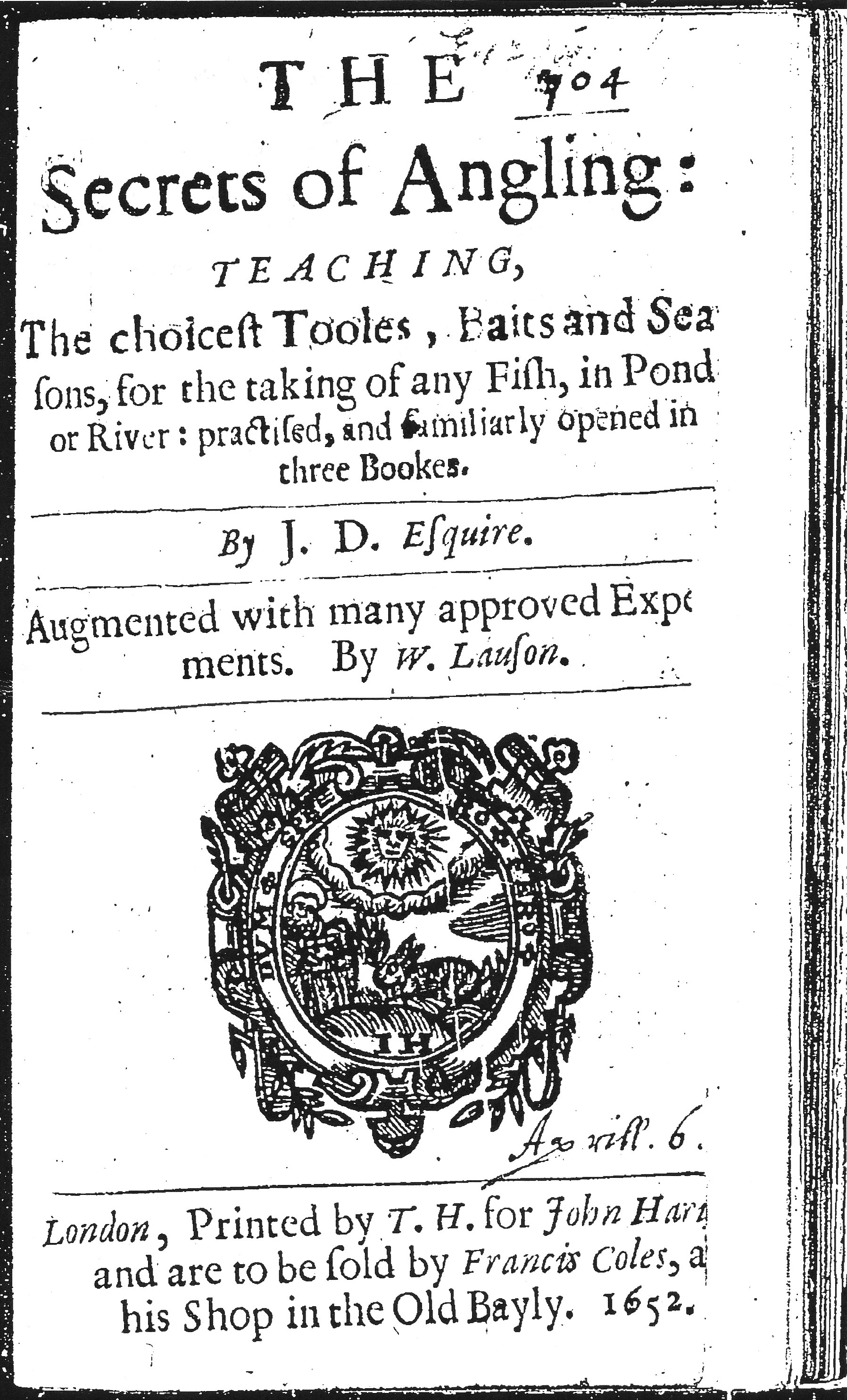 The Secrets of Angling, John Dennys, 1652