The Compleat Angler: And Other Meditations on the Art and Philosophy of Fishing, 15th Century to the Present: Juliana Berners

Treatyse of Fysshynge with an Angle 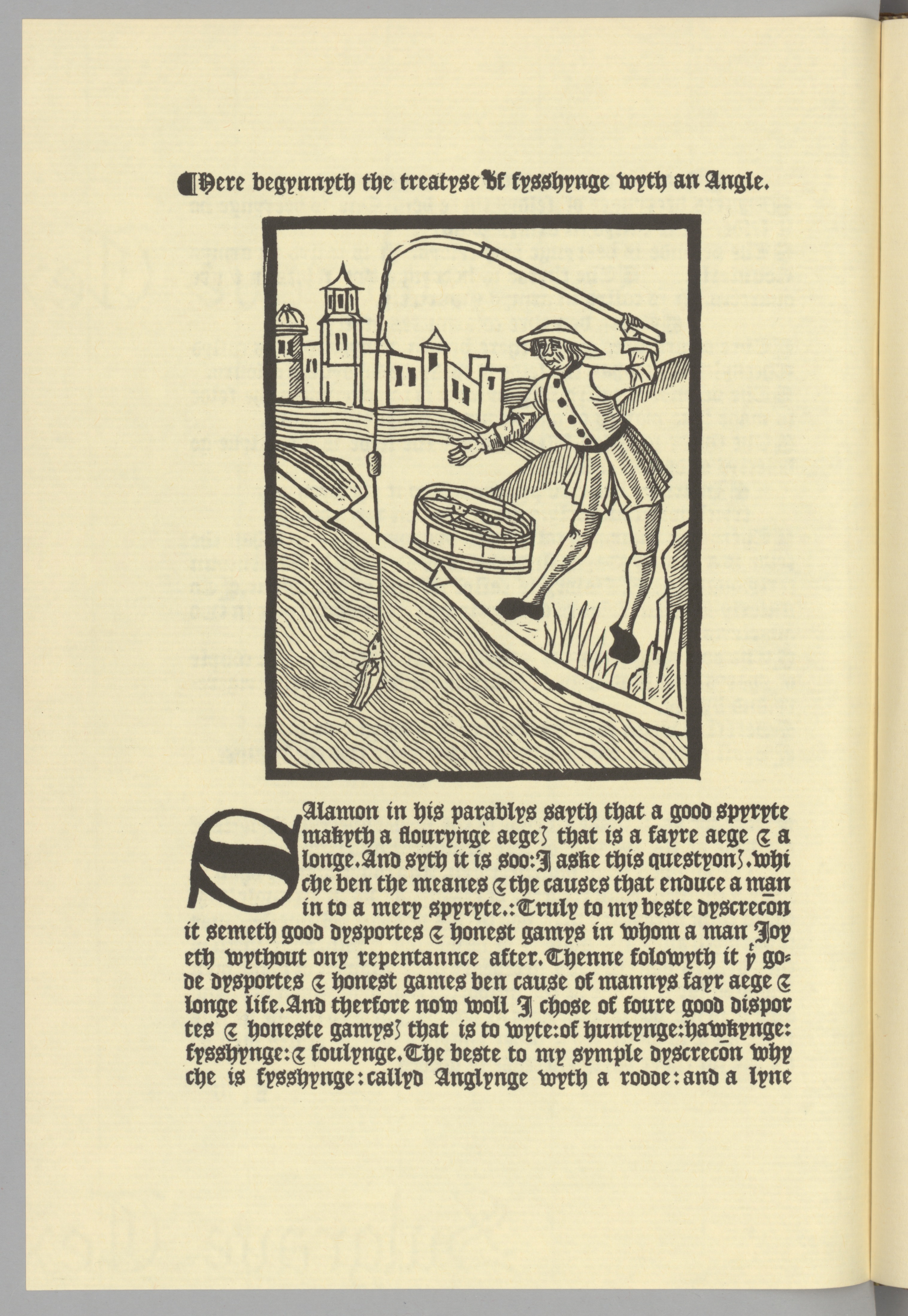 Treatyse of Fysshynge with an Angle, Juliana Berners, 1496

The Treatyse of Fysshynge with an Angle is one of the earliest works on angling written in the English language.  Wynkyn de Worde first published it in his edition of The Book of St. Albans in 1496, in which the Treatyse states that angling:

"…shall cause hym to be holy and to the heele of his body, For it shall cause him to be hole.  Also to the increase of his goodys.  For it shall make hym ryche.  As the olde englysshe prouerbe sayth in this wyse. who soo woll ryse erly shall be holy helthy and zely.  Thus have I prouyd in myn entent that the dysporte and game of anglynge is the very meane and cause that enducith a man in to a mery spyryte…" 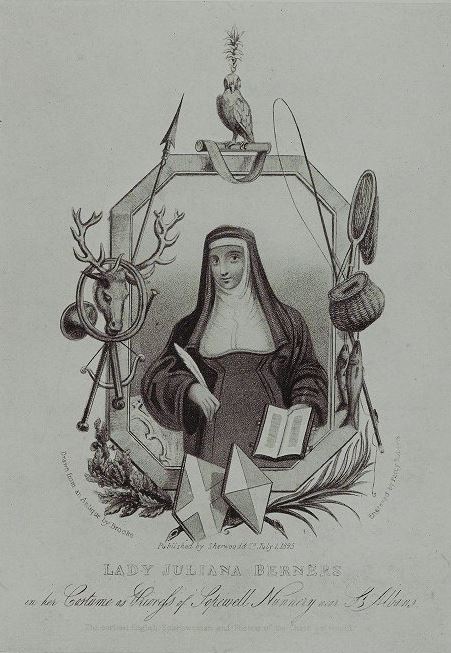 Illustration from "Annals of Sporting" Vol. VIII, 1825. Engraved by Percy Roberts "Drawn from an Antique by Brooke." (By courtesy of Messrs. J. Rimell and Son.)

Berners was a noblewoman and prioress of the Sopwell Nunnery near St. Albans, England, during the late 15th century, but little is known or recorded about her life other than her writing and publication of the Treatyse. Various accounts of the history of fishing literature describe her as a woman of keen intellect and an accomplished practitioner and avid devotee of outdoor sports, including angling and hunting.

Despite its antiquity, the Treatyse remains a remarkable work for its detail and vision. A comprehensive guide for the anglers of its time, the book contains substantial information on fishing destinations, rod and line construction, and selection of natural baits and preferred artificial fly dressings categorized by the season of their optimum utility. Perhaps most remarkable are the essays on the virtues of conservation, respecting the rights of streamside landowners, and angler’s etiquette. These concepts would not come to be commonly accepted and advocated in the angling world until 400 years after the publication of the Treatyse, yet today they embody the ethical bedrock of sport fishing.

Numerous women’s fly-fishing clubs and associations in the United States and Europe are named for Berners in tribute to her legacy as the first author of either gender to chronicle the fine points of the sport of angling.

-Biography from the Encyclopedia Britannica 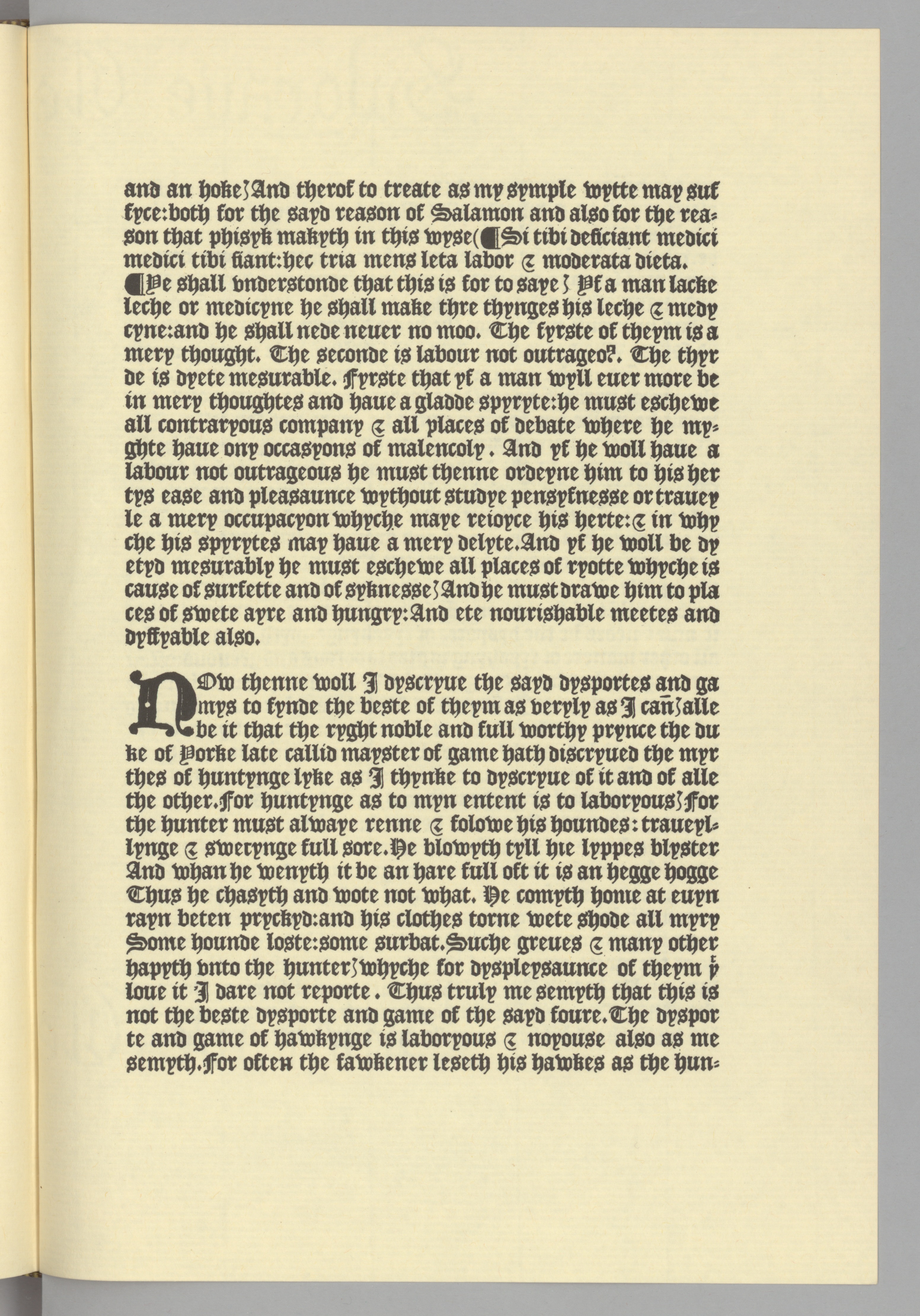 Treatyse of Fysshynge with an Angle, Juliana Berners, 1496

"Black letter, also called Gothic script or Old English script, in calligraphy, a style of alphabet that was used for manuscript books and documents throughout Europe—especially in German-speaking countries—from the end of the 12th century to the 20th century. It is distinguished by a uniform treatment of vertical strokes that end on the baseline (e.g., in b or l), the use of angular lines instead of smooth curves and circles (e.g., for b, d, o, or p), and the fusion of convex forms when they occur together (e.g., as bo, pa, and the like).

"When printing by movable type was invented, typefaces were based on the book manuscript styles of the time. Black letter and revised Carolingian roman were the two dominant letter shapes of medieval typography. Black-letter type was used in the only extant work known to have been printed by Johannes Gutenberg, the 42-line Bible. Eventually, roman type, which was considered more legible by humanists, superseded black letter throughout Europe, except in Germany; there it persisted until 1941, when the Nazi government forbade its use. Black-letter typography persists in the 21st century mainly in the Old English calligraphy or type used for diplomas, certificates, liturgical printing, and newspaper mastheads."

-Definition from the Encyclopedia Britannica