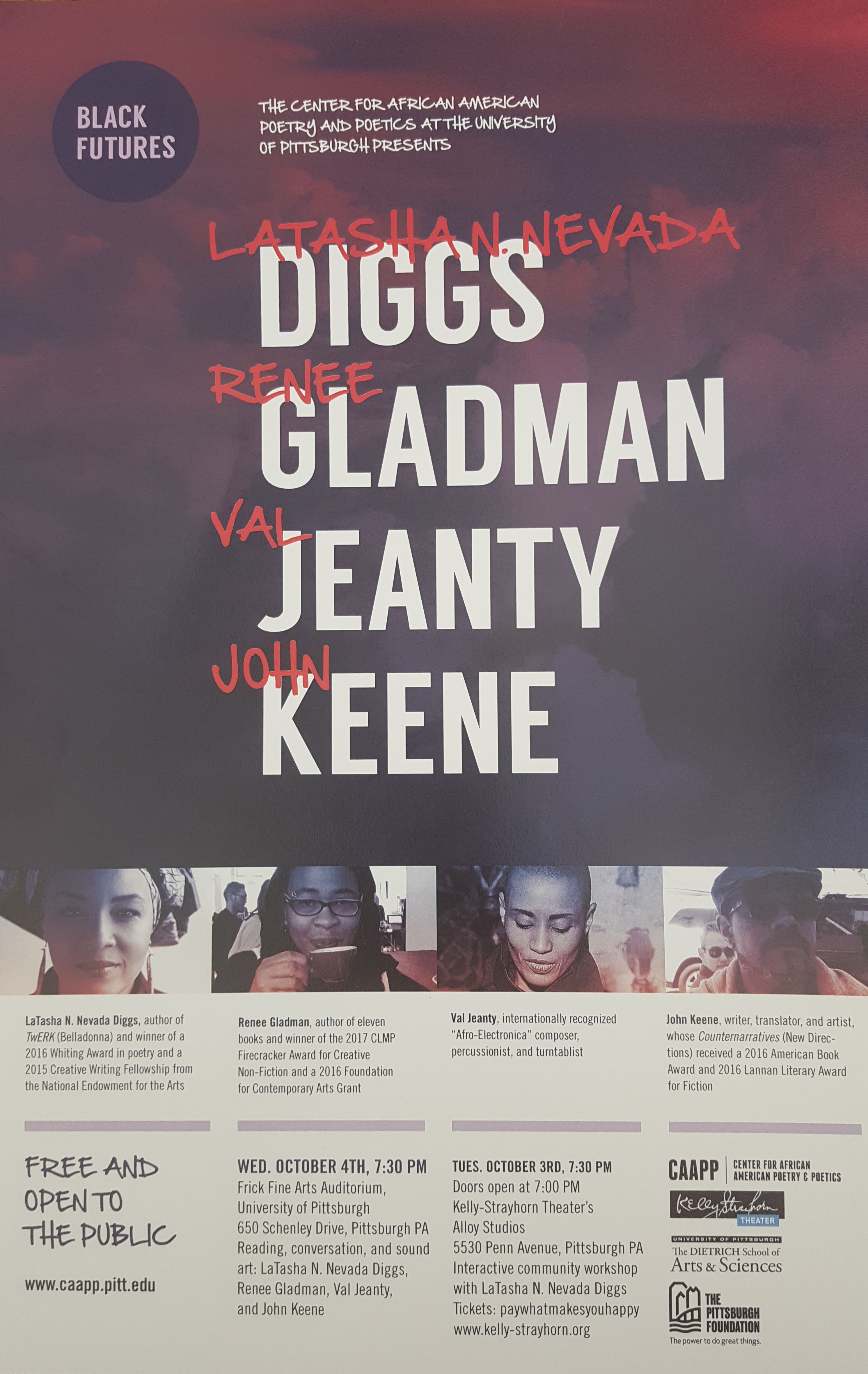 Writers Renee Gladman and John Keene read and participated in a conversation with poet and sound artist LaTasha N. Nevada Diggs. Diggs and her collaborator, "Afro-Electronica" composer and percussionist Val Jeanty, presented a new sound piece in response to Gladman's and Keene's works. A writer, vocalist and sound artist, LaTasha N. Nevada Diggs is the author of TwERK (Belladonna, 2013). Her interdisciplinary work has been featured at the Brooklyn Museum, the Poesiefestival Berlin, Museum of Modern Art, the QOW conference in Slovakia, the International Poetry Festival in Bucharest, the Whitney Museum of American Art, the Walker Art Center, and the 2015 Venice Biennale. As a curator and director, she has staged events at BAM Café, Lincoln Center Out of Doors, The David Rubenstein Atrium, The Highline, Poets House, and El Museo del Barrio. LaTasha is the recipient of numerous awards; some of them include New York Foundation for the Arts, Barbara Deming Memorial Grant, the National Endowment for the Arts, the Jerome Foundation, the Japan-US Friendship Commission, Creative Capital and a 2016 Whiting Award for Poetry. Co-founder and co-editor of Coon Bidness/SO4 magazine, she lives in Harlem. Renee Gladman is a writer and artist preoccupied with lines, crossings, thresholds, and geographies as they play out in the interstices of poetry and prose. She is the author of eleven published works, including a cycle of novels about the city-state Ravicka and its inhabitants, the Ravickians—Event Factory (2010), The Ravickians (2011), Ana Patova Crosses a Bridge (2013), and Houses of Ravicka (forthcoming fall 2017)—and the recently released Prose Architectures, her first monograph of drawings, and Calamities, a collection of linked essay-fictions on the intersections of writing, drawing, and community, winner of the 2017 CLMP Firecracker Award for Creative Non-Fiction. Recent essays and visual work have appeared in The Paris Review, Granta, Harper's, Stonecutter, and Poetry Magazine. A 2014-15 fellow at Radcliffe Institute for Advanced Study at Harvard University and recipient of a 2016 Foundation for Contemporary Arts Grant and a 2017 Lannan Foundation Writing Residency in Marfa, TX, she makes work in New England. Haitian electronic music composer/percussionist/turntablist Val Jeanty evokes the musical esoteric realms of the creative subconscious self-defined as “Afro-Electronica.” She incorporates her African Haitian musical traditions into the present and beyond, combining acoustics with electronics and the archaic with the post-modern. She works with a diverse array of artists, including Steve Coleman as a turntablist/composer and Anthony Braxton as a recording engineer. She is the recipient of the Van Lier Grant, a Meet the Composer Grant, and her project "ON" was supported in part by the New York State Music Fund. Her “Afro-Electronica” installations have been showcased in New York City at the Whitney Museum, the Museum of Modern Art, the Brooklyn Academy of Music, and the Village Vanguard, and internationally at SaalFelden Music Festival in Austria, Stanser Musiktage in Switzerland, Jazz à la Villette in France, and the Biennale Di Venezia Museum in Italy. John Keene’s most recent books include the short fiction collection Counternarratives (New Directions, 2015), which received a 2016 American Book Award, a 2016 Lannan Literary Award for Fiction, and in March 2017 the UK's inaugural Republic of Consciousness Prize; the art book GRIND (ITI Press, 2016), an art-text collaboration with photographer Nicholas Muellner; and the poetry chapbook Playland (Seven Kitchens Press, 2016). He is also the translator of Brazilian author Hilda Hilst’s novel Letters from a Seducer (Nightboat Books / A Bolha Editora, 2014), and other works of fiction and poetry. He chairs the department of African American and African Studies, and also teaches English and creative writing at Rutgers University-Newark. 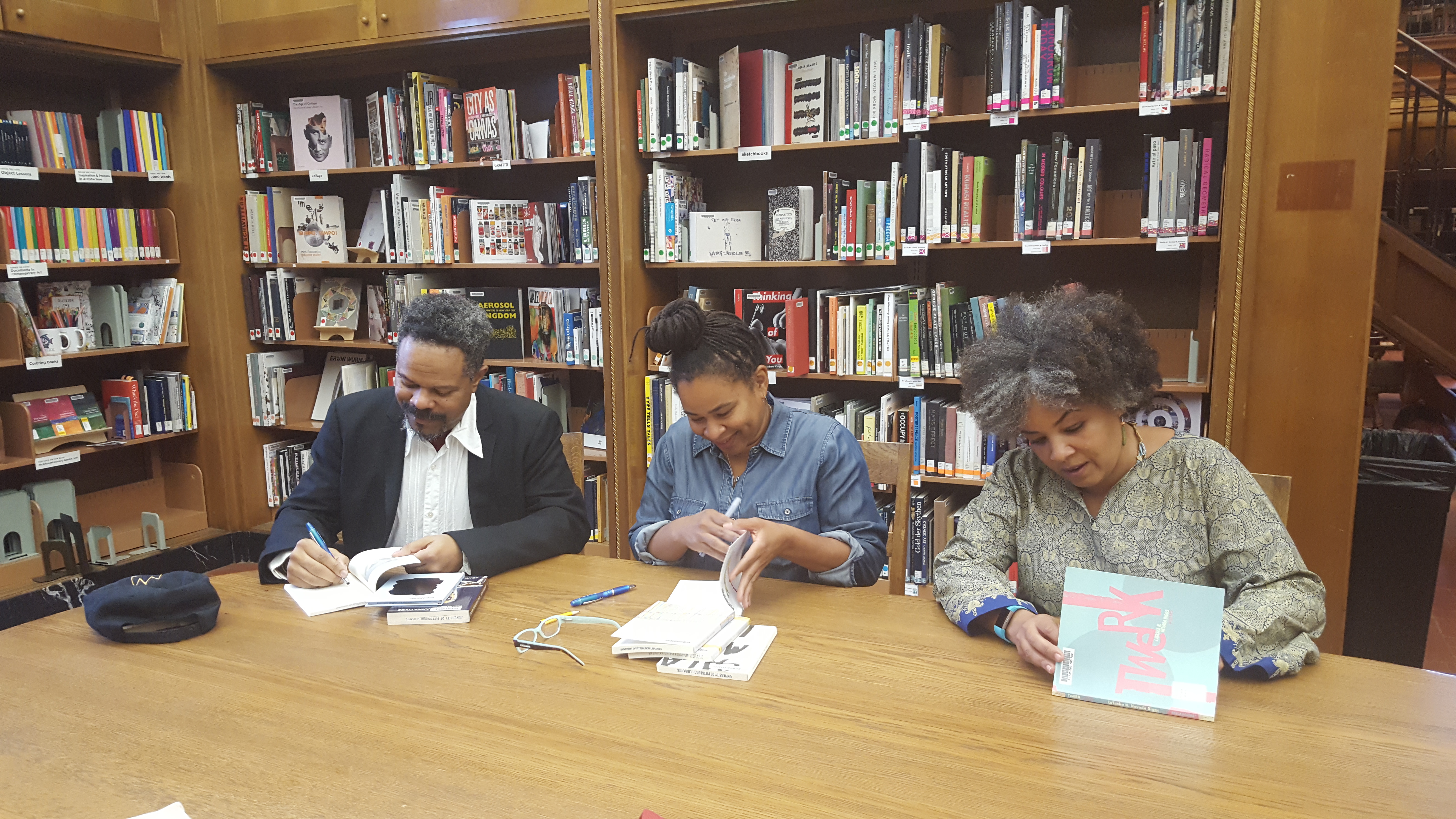