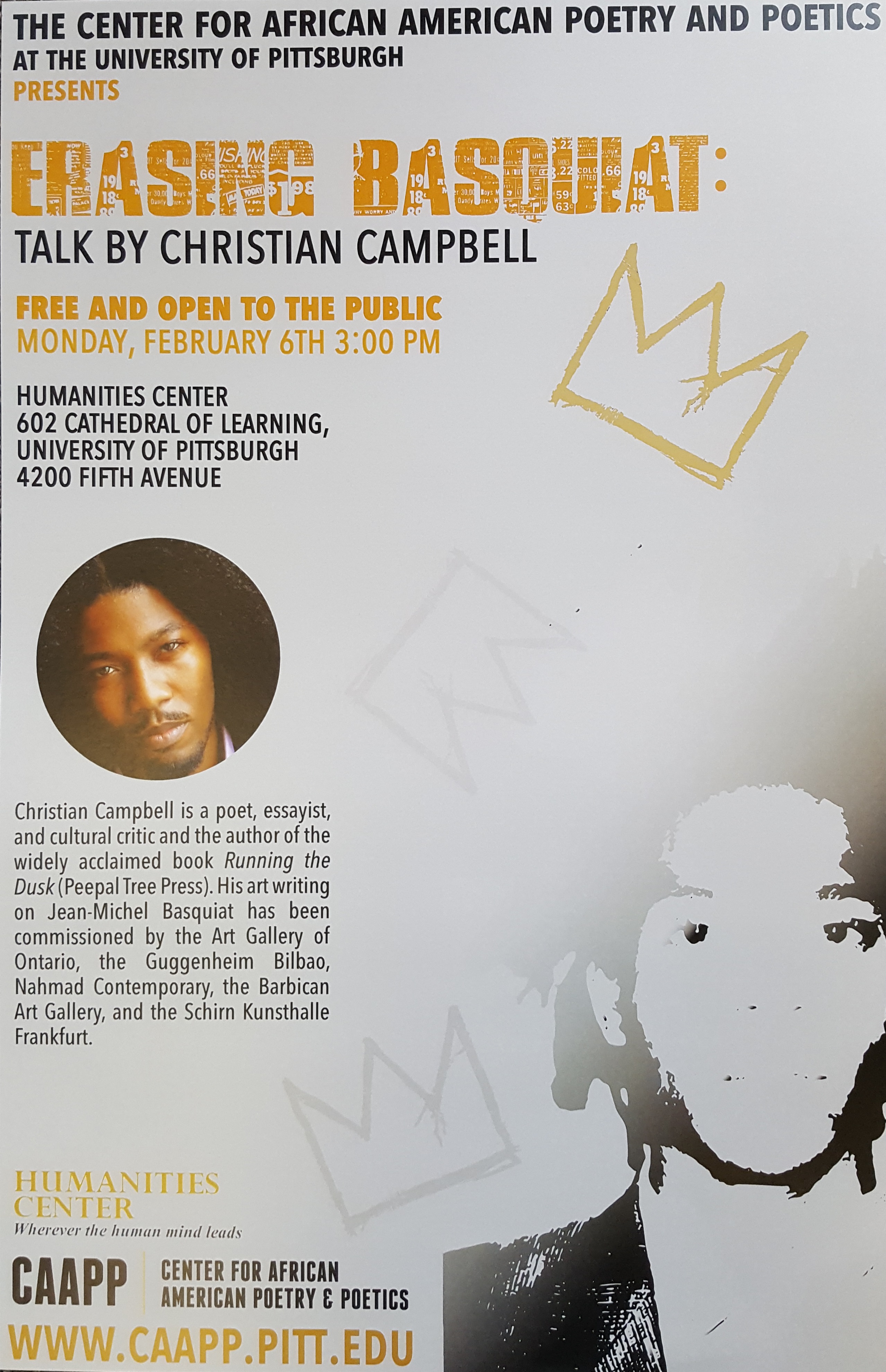 In the span of a few years, there have been an unusual number of international exhibits of the work of Haitian-Nuyorican-American artist Jean-Michel Basquiat. In 2014, the city of Paris named a public square in its 13th arrondissement after Basquiat. In the aftershocks of the extrajudicial killings of Michael Brown, Eric Garner, Walter Scott, Freddie Gray, Sandra Bland and countless others, Basquiat’s iconic paintings “Irony of a Negro Policeman” (1981) and “The Death of Michael Stewart” (1983) frequently appeared in social media. What do we make of this moment of Basquiat’s major global “revival”?  What has been erased from the criticism, curation and consumption of Basquiat’s global legacy? What might we re-vision in Basquiat’s work if we rightfully reframe him as an erasurist? Basquiat's visual critique simultaneously tests limits and asks us to think across boundaries. He embodies interdisciplinarity as resourcefulness or even a kind of love; the act of collecting and drawing on anything available in the name of survival.

Christian Campbell is a Trinidadian-Bahamian poet, essayist and cultural critic who has lived in the Caribbean, the United States, the United Kingdom and Canada. He is the author of Running the Dusk (2010), which won the Aldeburgh First Collection Prize and was a finalist for the Forward Prize for the Best First Collection and the Cave Canem Poetry Prize among other awards. The book was also named one of the best books of the year by the Caribbean Review of Books, Horizon Review and Poetry International.  Running the Dusk was recently translated into Spanish and published in Cuba as Correr el Crepúsculo (2015). Pulitzer Prize-winning poet Yusef Komunyakaa calls Running the Dusk “the gutsy work of a long-distance runner who possesses the wit and endurance, the staying power of authentic genius.”

Campbell delivered the fifteenth annual Derek Walcott Lecture for Nobel Laureate Week in St. Lucia and was an invited poet at Poetry Parnassus for the Cultural Olympiad of London’s Olympic Games.  He was also Alan Collins Fellow at the Bread Loaf Writers Conference, Helen Zell Visiting Writer at the University of Michigan, and a keynote speaker and poet at “The Power of Caribbean Poetry—Word and Sound” Conference at the University of Cambridge.

His recent work includes a manuscript on poetry and diaspora and a book of essays on visual art, sports, literature, performance, travel and cultural politics. This book will include a series of essays on Jean-Michel Basquiat commissioned for major exhibits in Canada (Art Gallery of Ontario), Spain (Guggenheim Bilbao), the US (Nahmad Contemporary), the UK (Barbican Art Gallery) and Germany (Schirn Kunsthalle Frankfurt), for which he received the Art Writing Award from the Ontario Association of Art Galleries.

Thanks to support from the Humanities Center at the University of Pittsburgh, and thanks to our community partner, The Andy Warhol Museum 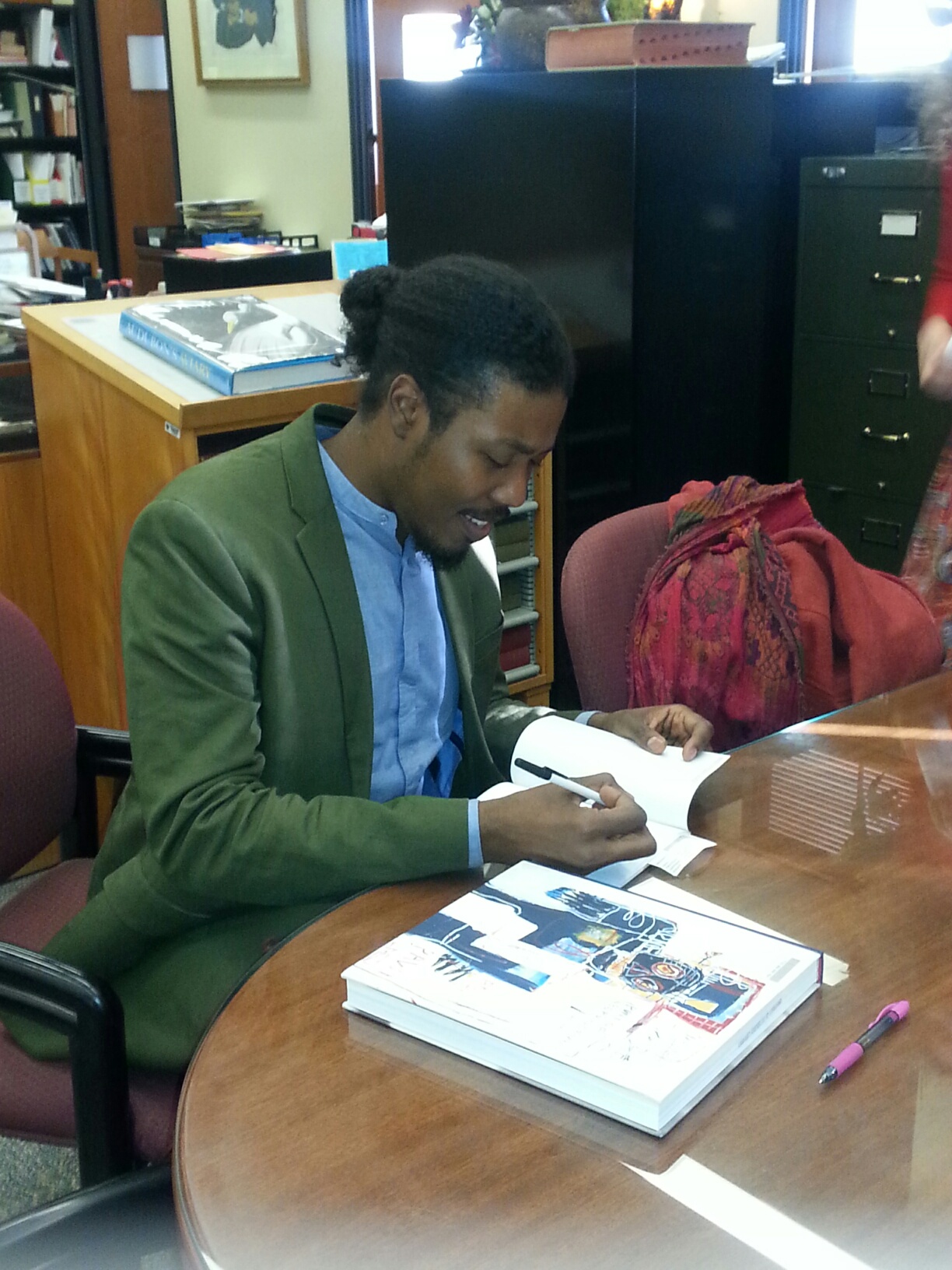