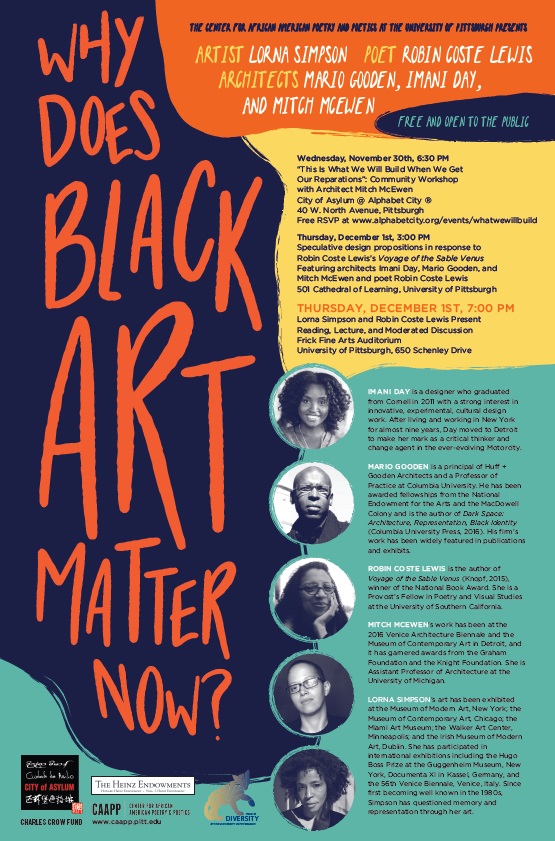 "This is What We Will Build When We Get Our Reparations": Community Workshop with Mitch McEwen

Architect Mitch McEwen led a community workshop called "This is What We Will Build When We Get Our Reparations." Using a laptop, projector, laser printer, pieces of foam, exacto blades, old magazines, glue, paper, and scissors, McEwen guided participants through a design charrette. The term “charrette” means “cart” in French and goes back to 19th century design schools in Paris, wheeling design work from frantic student teams to be presented at finals. This design exercise was swift and visionary and local, honing in on sites in Pittsburgh that could be developed with resources of reparations long (over)due to the descendants of enslaved Africans in the USA.

Visual Artist Lorna Simpson gave a short lecture on her art and the topic "Why Black Art Matters Now." Poet Robin Coste Lewis read from Voyage of the Sable Venus, and Simpson and Lewis participated in a moderated discussion. 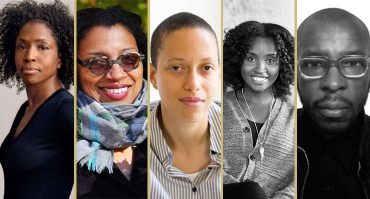 Imani Day is a designer from Montclair, NJ. She graduated early from Cornell with a Bachelor of Architecture and headed straight to Brooklyn to work with Robert A.M. Stern Architects in Manhattan. Day eventually made her way to Diller Scofidio + Renfro to pursue a strong interest in innovative, experimental, cultural design work including museums, public plazas, and various installations. During that time, all the energy and potential coming out of Detroit caught her attention, and after spending almost nine years in New York, she moved to the Midwest.  An opportunity came to work with Gensler's local Detroit office, where Day now works on community-oriented design projects, mixed-use residential work, global automotive boutique retail. She also serves as an executive board member in the local chapter of the National Organization of Minority Architects and continues to be an agent of change in Detroit as the city moves forward.

Mario Gooden is principal of Huff + Gooden Architects and a Professor of Practice at the Graduate School of Architecture Planning and Preservation (GSAPP) of Columbia University, where he is also co-director of the Global Africa Lab (GAL). He is a 2012 National Endowment for the Arts Fellow and a MacDowell Colony Fellow.

Gooden’s work, writings, and lectures frequently examine art + architecture and the spatial politics of race, class, gender, and technology. His firm is currently designing the California African American Museum in Los Angeles. He previously worked in the offices of Zaha Hadid in London and Steven Holl in New York. His urban and cultural theory research was published at the Dubai Initiative’s Urbanism in the Middle East: A Search for New Paradigms in 2011 and Layered Urbanisms (Yale University, 2008). He is the editor of Global Topologies: Converging Territories (Columbia University, 2013). Gooden teaches advanced architectural design and theory at Columbia University, where his studios focus on global topics and cultural theory.  His book, Dark Space: Architecture Representation Black Identity (2016), was recently published by Columbia University Press.

Robin Coste Lewis is the author of Voyage of the Sable Venus (Knopf, 2015), a National Book Award winner. She is a Provost’s Fellow in Poetry and Visual Studies at the University of Southern California. Lewis is also a Cave Canem fellow and a fellow of the Los Angeles Institute for the Humanities. She received her BA from Hampshire College, her MFA in poetry from NYU, and an MTS in Sanskrit and comparative religious literature from the Divinity School at Harvard University. A previous finalist for the Rita Dove Poetry Award, she has published her work in various journals and anthologies, including The Massachusetts Review, Callaloo, The Harvard Gay & Lesbian Review, Transition: Women in Literary Arts, VIDA, Phantom Limb, and Lambda Literary Review, among others. She has taught at Wheaton College, Hunter College, Hampshire College, and the NYU Low-Residency MFA in Paris. Lewis was born in Compton, California; her family is from New Orleans.

Mitch McEwen works in architectural and urban design, focusing on the intersection of urban culture and global forces.  Her A(n) Office work is currently exhibited in the U.S. pavilion at the 2016 Venice Architecture Biennale, and McEwen's solo exhibition Methexis was recently presented by the Museum of Contemporary Art in Detroit.  McEwen has worked as an urban designer for Bernard Tschumi Architects and New York City’s Department of City Planning.  Her work has garnered awards from the Graham Foundation and the Knight Foundation and been featured in Architectural Record, The New York Times, ARTNews, and Log. She has been Assistant Professor of Architecture at the Taubman College, University of Michigan, since 2014.

Lorna Simpson was born in 1960 in Brooklyn, New York, and received her BFA in Photography from the School of Visual Arts, New York, and her MFA from the University of California, San Diego. When Lorna Simpson emerged from the graduate program at San Diego in 1985, she was already considered a pioneer of conceptual photography. Feeling a strong need to re-examine and re-define photographic practice for contemporary relevance, Simpson was producing work that engaged the conceptual vocabulary of the time by creating exquisitely crafted documents that are as clean and spare as the closed, cyclic systems of meaning they produce. Her initial body of work alone helped to incite a significant shift in the view of the photographic art’s transience and malleability.

Lorna Simpson first became well known in the mid-1980s for her large- scale photograph-and-text works that confront and challenge conventional views of gender, identity, culture, history and memory. With unidentified figures as a visual point of departure, Simpson uses the figure to examine the ways in which gender and culture shape the interactions, relationships and experiences of our lives in contemporary America. In the mid-1990s, she began creating large multi-panel photographs printed on felt that depict the sites of public – yet unseen – sexual encounters. Over time she turned to film and video works in which individuals engage in enigmatic conversations that seem to address the mysteries of both identity and desire. Throughout her body of work, Simpson questions memory and representation, whether in her moving juxtaposition of text and image, in her haunting video projection Cloudscape and its echo in the felt work Cloud, or in her large-scale video installation Momentum, which recreates a childhood dance performance. Using the camera as a catalyst, Simpson constructs work comprising text and image, parts to wholes, which comment on the documentary nature of found or staged images. In Simpson’s latest paintings, characteristic ambivalence is presented with hazy ink washes to present isolated figures amidst nebulous spaces– a return to her earlier unidentified figures in a deepened exploration of contemporary culture.

Her work has been exhibited at the Museum of Modern Art, New York; the Museum of Contemporary Art, Chicago; the Miami Art Museum; the Walker Art Center, Minneapolis; the Irish Museum of Modern Art, Dublin. She has participated in such important international exhibitions as the Hugo Boss Prize at the Guggenheim Museum, New York, Documenta XI in Kassel, Germany, and the 56th Venice Biennale, Venice, Italy. She has been the subject of numerous articles, catalogue essays, and a monograph published by Phaidon Press. Her first mid-career survey was exhibited at the Los Angeles Museum of Contemporary Art, the Miami Museum of Art, the Whitney Museum of American Art, and the Gibbes Museum in South Carolina with accompanying monograph published by the American Federation of the Arts, New York, and the Whitney Museum of American Art, New York.  In 2013 her works on paper were the subject of an exhibition at the Aspen Art Museum with accompanying catalogue Lorna Simpson Works on Paper, Aspen Art Museum. A survey retrospective, accompanied by a monograph Lorna Simpson published by Prestel Press, New York, premiered in 2013 at the Jeu de Paume, Paris, and traveled to the Haus der Kunst, Munich, and in 2014 to the The BALTIC Centre for Contemporary Art, Gateshead, England and the Addison Gallery of American Art, Andover, Massachusetts. Most recently in 2016, Simpson’s new body of works were exhibited at Salon 94, New York and the Modern Art Museum of Fort Worth, Texas. 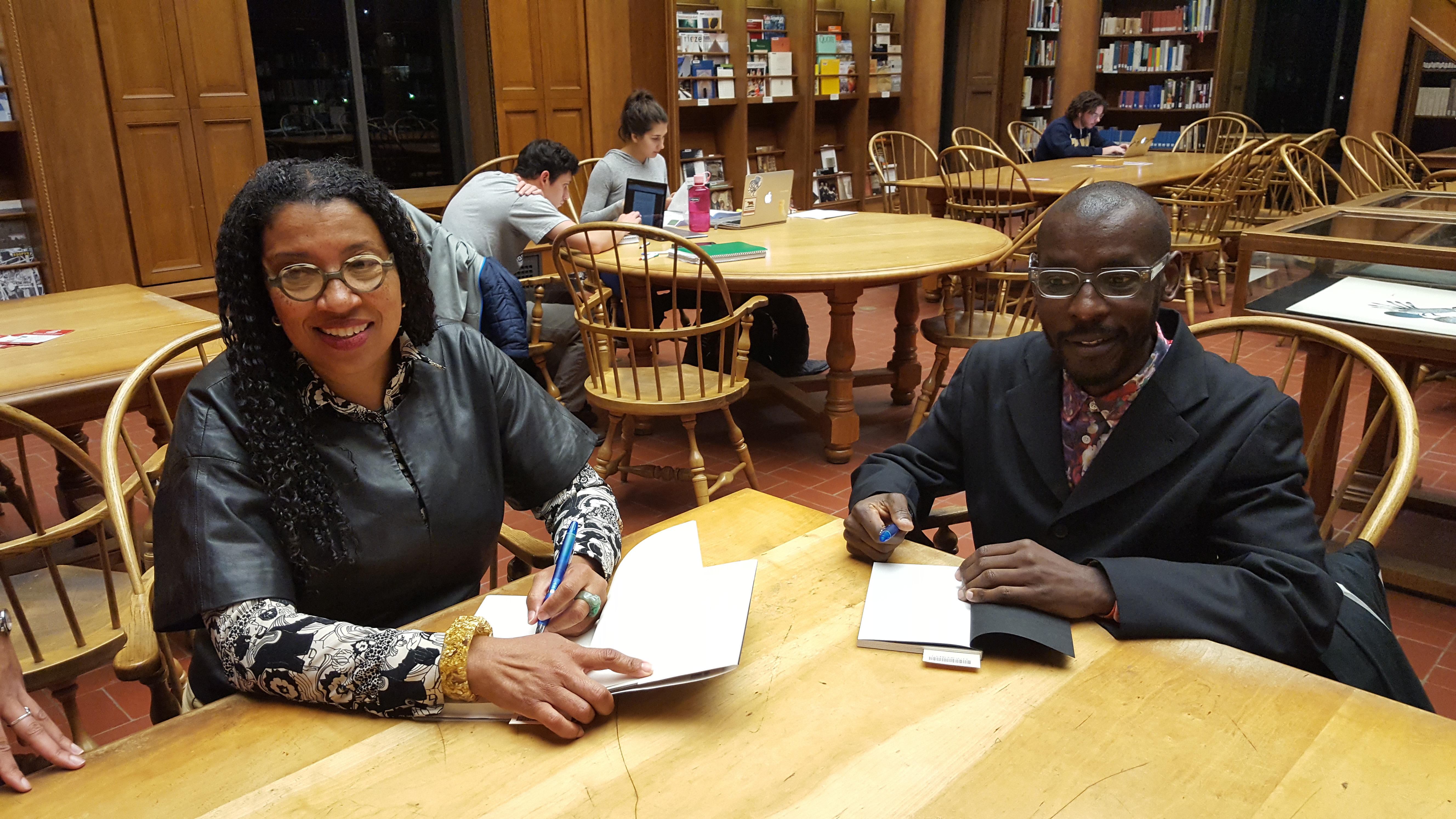 Robin Coste Lewis and Mario Gooden in the Frick Fine Arts Library. Lorna Simpson signed her titles at the event.