June 17-18, 2017 Event - The Next Generation of Black Poets: Cave Canem Fellows and Friends 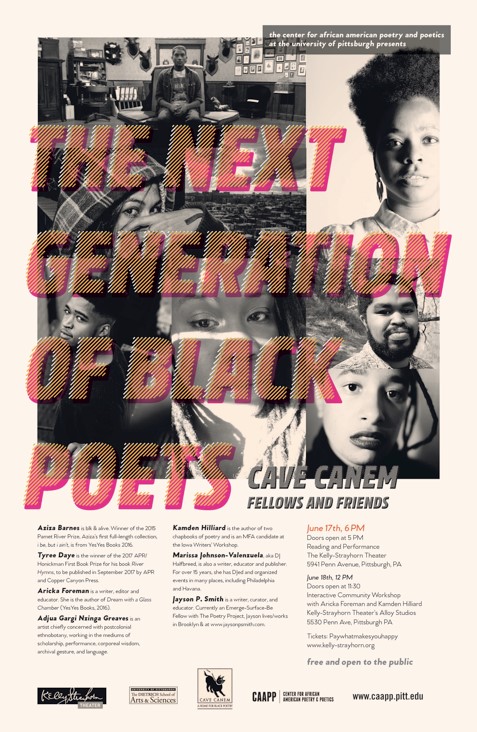 Aziza Barnes is blk & alive. Winner of the 2015 Pamet River Prize, Aziza’s first full-length collection, i be but i ain’t, is out from YesYes Books 2016. They are a Cave Canem Fellow, co-founder of The Conversation Literary Festival, and co-host of the podcast The Poetry Gods.

Tyree Daye is a poet from Youngsville, North Carolina. He is winner of the 2017 APR/Honickman First Book Prize for his book River Hymns. Daye is a Cave Canem Fellow and longtime member of the editorial staff at Raleigh Review. Daye’s work has been published in Prairie Schooner, Nashville Review, and he has poems in Four Way Review and forthcoming in Ploughshares. Daye recently won the Amy Clampitt Residency for 2018 and The Glenna Luschei Prairie Schooner Award for his poems in the Fall 2015 issue.

Aricka Foreman's poetry and prose have appeared in The Drunken Boat, Minnesota Review, RHINO, Day One, Phantom, shuf Poetry, James Franco Review, thrush, Vinyl, PLUCK!, Please Excuse This Poem: 100 New Poems for the Next Generation by Viking Penguin, among others. A Cave Canem and Callaloo alum, she is the author of Dream With A Glass Chamber from YesYes Books. Originally from Detroit, she currently lives in Chicago.

Adjua Gargi Nzinga Greaves (New York City, 1980) is an artist chiefly concerned with postcolonial ethnobotany, working in the mediums of scholarship, performance, corporeal wisdom, archival gesture, and language. Greaves has been published in The Black Earth Institute's About Place Journal, The Recluse, and writes reviews for The Poetry Project Newsletter. She lives and works in New York City, where she is young mother of The Florxal Review and is completing work on the forthcoming Bulletin of Wilderness and Academy: an introductory conclusion to unschoolMFA. As a board member of Wendy's Subway, Greaves foregrounds stewardship and interbeing in the practice of study, bringing the somatics of her scholarly practices into her emerging communities. Adjua Gargi Nzinga Greaves holds a BA in Cultural Anthropology from Trinity College, where she was also awarded an Honorary Minor in Studio Art. She is a graduate of The Chapin School. Galleries of her documentary photography and Afrofuturist dioramas are viewable on Instagram via @TerraBot and @SuperModelStudioPractice respectively.

Kamden Hilliard is a poet and essayist, poetry editor at Jellyfish Magazine, chapbook editor at Big Lucks, and an MFA candidate in poetry at the Iowa Writers' Workshop. Kamden goes by Kam. They have received support from Callaloo, The Davidson Institute, The Ucross Foundation, and Sarah Lawrence College. Kam is the author of the chapbooks Distress Tolerance (Magic Helicopter Press, 2016) and Perceived Distance From Impact (Black Lawrence Press, 2017). Their work appears (or is forthcoming) in West Branch, Boaat Magazine, The Black Warrior Review, Muzzle Magazine, Salt Hill, and other lovely places. If they weren't writing, they'd be sad / or a scientist. 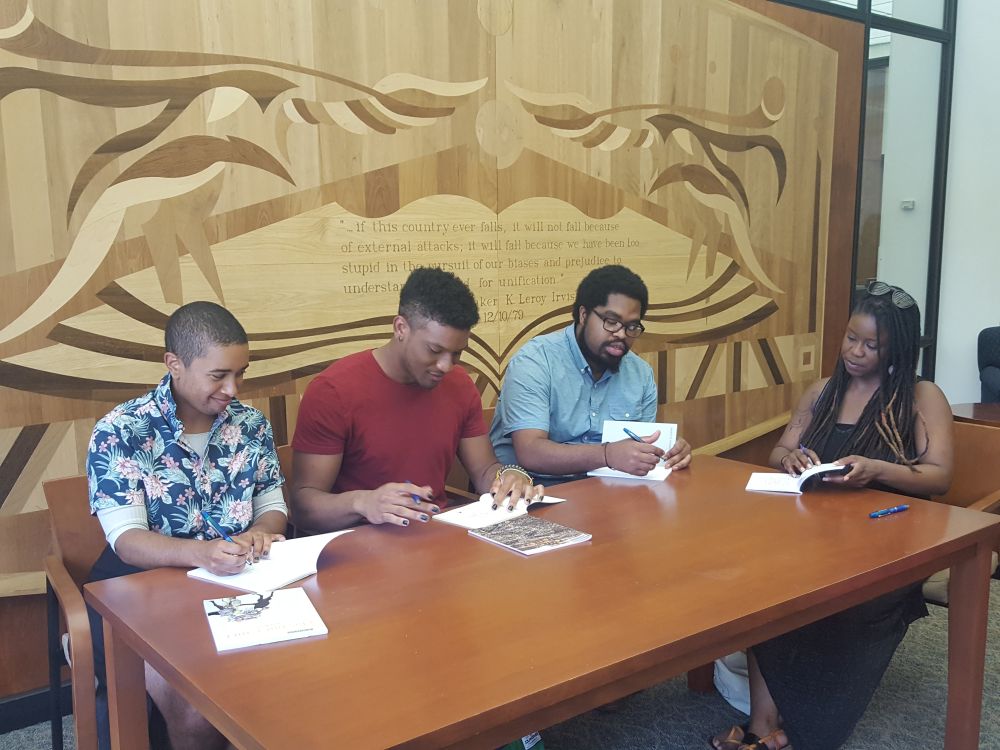