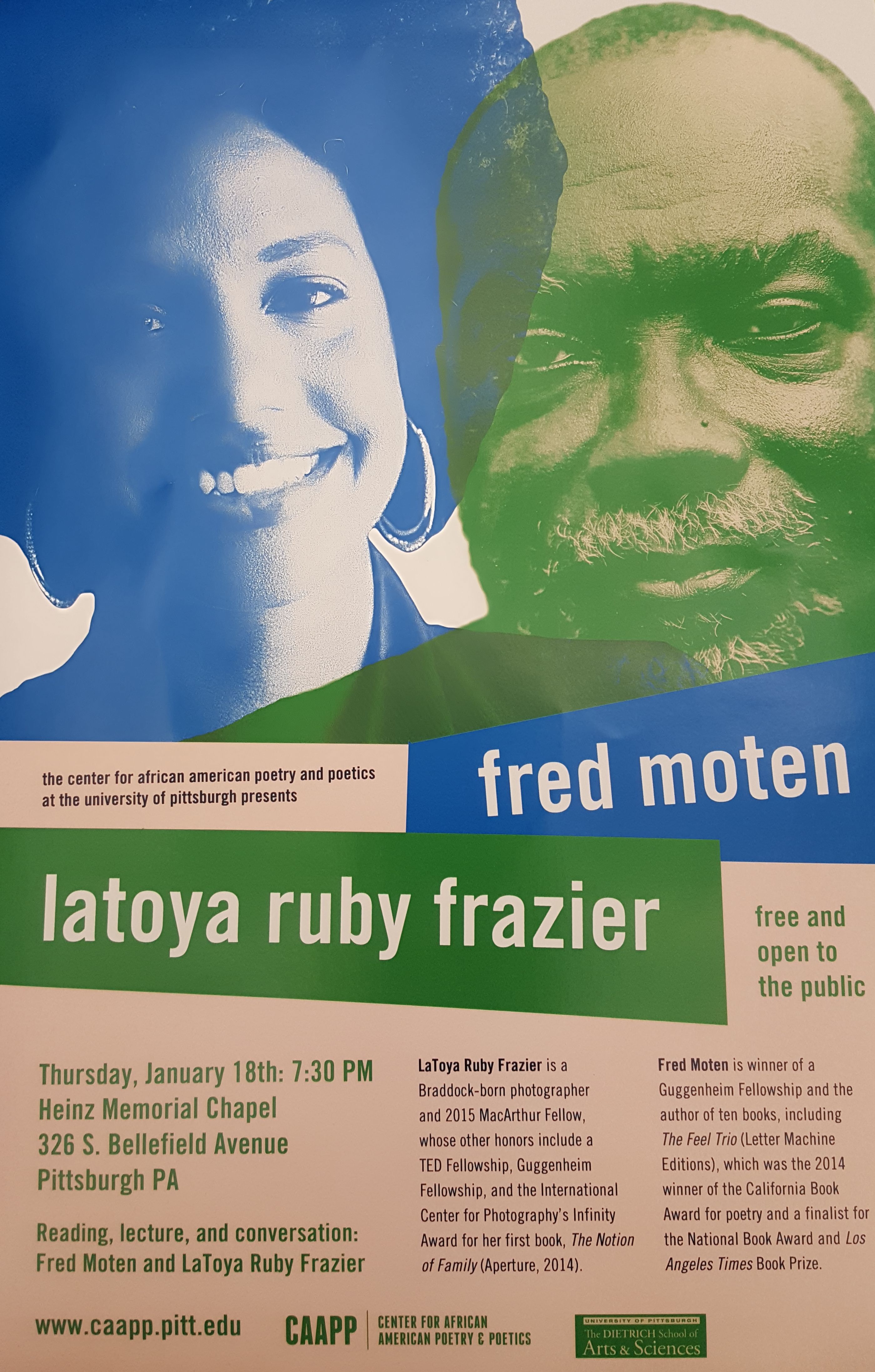 Fred Moten was raised in Las Vegas, Nevada, and lived briefly in Pennsylvania and Arkansas before enrolling at Harvard University in Boston, Massachusetts. After one year at Harvard, he took a hiatus and went back to Las Vegas, where he worked as a janitor at the Nevada Nuclear Test Site, read Dante, and wrote poems. One year later, he returned to Harvard and received his AB, before earning his PhD in English from the University of California, Berkeley.

A scholar whose work explores black studies, performance studies, poetry, and critical theory, Moten has taught at several colleges and universities, including the University of Iowa, New York University, Duke University, the Naropa Institute, and Brown University, among others.

His poetry collections include The Little Edges (Wesleyan University Press, 2014), The Feel Trio (Letter Machine Editions, 2014), B Jenkins (Duke University Press, 2010), and Hughson’s Tavern (Leon Works, 2008). His scholarly texts include The Undercommons: Fugitive Planning & Black Study (Minor Compositions, 2013), coauthored with Stefano Harney, and In the Break: The Aesthetics of the Black Radical Tradition (University of Minnesota, 2003). His most recent publication from Duke University Press is Black and Blur (December 2017) which is a part of an interdisciplinary trilogy of books called consent not to be a single being.

In 2009, Moten was recognized as one of ten “New American Poets” by the Poetry Society of America. Poet and nonfiction author Maggie Nelson writes of Moten’s work, “With insistence, music, and a measured softness, Fred Moten’s poems construct idiosyncratic, critical canons that invite our research and repay our close attention. … It is hard to make poetry that shimmers on such an edge. Moten does so, and then some.” LaToya​ ​Ruby​ ​Frazier​ received her BFA in applied media arts from Edinboro University of Pennsylvania and her MFA in art photography from Syracuse University. She also studied under the Whitney Museum of American Art Independent Study Program and was the Guna S. Mundheim Fellow for visual arts at the American Academy in Berlin.

Frazier’s work is exhibited widely in the U.S. and internationally, with notable solo exhibitions at Brooklyn Museum; Seattle Art Museum; Institute of Contemporary Art, Boston; and Contemporary Arts Museum Houston. Her work has been exhibited in the following biennials: the Whitney Museum of American Art Biennial (2012), NY; Recycling Memory: Recapturing the Lost City (2014), 11th Nicaraguan Visual Arts Biennial, Managua; Mom, am, I barbarian? (2013),13th Istanbul Biennial; and Busan Biennale (2014), South Korea. Frazier is the recipient of many honors and awards including an Honorary Doctorate of Fine Arts from Pratt Institute (2017); fellowships from the John D. and Catherine T. MacArthur Foundation's MacArthur Fellows Program (2015), TED Fellows (2015), and the John Simon Guggenheim Memorial Foundation (2014); the Gwendolyn Knight & Jacob Lawrence Prize from the Seattle Art Museum (2013), the Theo Westenberger Award of the Creative Capital Foundation (2012), the Louis Comfort Tiffany Foundation Award (2011), and Art Matters (2010). In 2015, the Allegheny County Council (Pennsylvania, USA) awarded Frazier a Proclamation thanking her for "examining race, class, gender and citizenship in our society and inspiring a vision for the future that offers inclusion, equity and justice to all." 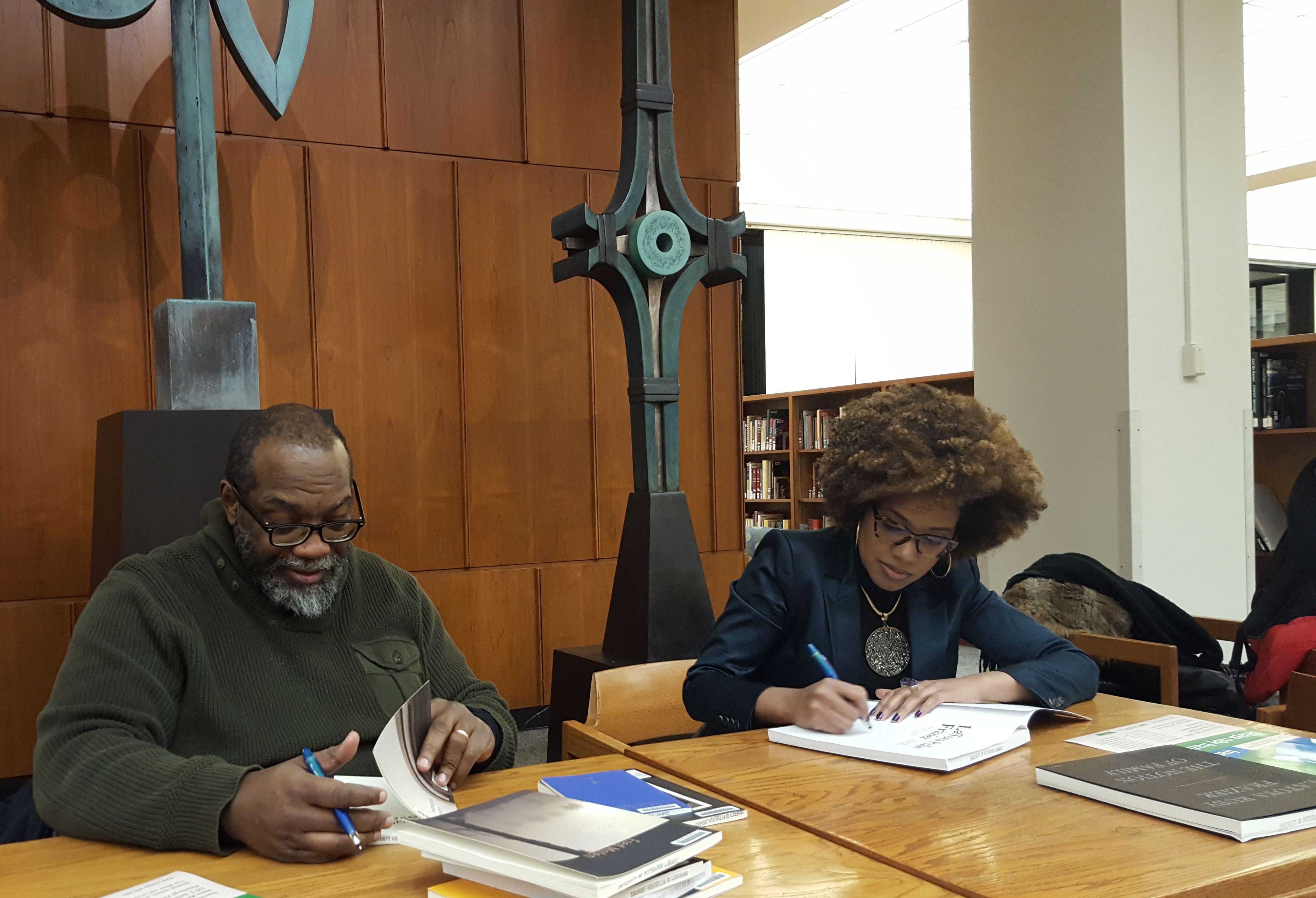