Though best known for his dictionary, Samuel Johnson's literary repertoire was not limited to lexicography. Johnson was exposed to literature at a very early age, with his mother insisting he memorize and recite passages from The Book of Common Prayer before the age of six and his father a bookseller. Though he did not graduate from a university and was not awarded honorary degrees until 1755, his clear intelligence enabled him to acquire several teaching positions.

Before the publication of The Rambler, Johnson was involved in a number of periodicals and papers. He is recorded as having composed several essays for the Birmingham Journal at the bequest of the publisher, and his good friend, Thomas Warren. Though none have survived, these articles would have been Johnson's earliest original published works. He was also involved in The Gentleman's Magazine, where he coined the name "Columbia" as a personified form of the United States of America. Johnson was also an active contributor to The Idler, which was a collaborative periodical, but was primarily composed of his essays.

Johnson's literary interest was not limited to the English language. He is reported to have excelled at Latin while in grammar school, and the earliest known example of his work is a translation of Alexander Pope's Messiah that was published in Miscellany of Poems (1731). Johnson was also skilled in the study of languages, translating Jerónimo Lobo's A Voyage from Abyssinia from its original Portuguese, and composing an annotated edition of the poems of the Italian scholar Poliziano.

Johnson's body of work has earned him a place in literary history, but he experienced some artistic shortcomings, primarily in the genres of fiction and prose. Life of Johnson alleges that Johnson regarded his play Irene, a historical drama, as his greatest literary failure despite its popularity. Johnson's first published poem, London, was also very successful with his contemporaries, but Johnson thought it a poor example of poetic imitation. Later poems, such as The Vanity of Human Wishes, are more highly regarded by both himself and modern literary figures than London. Johnson's more successful novella, The Prince of Abissinia: A Tale, was immediately translated into five languages and referenced in classics such as Jane Eyre and Little Women.

A view of Case XII as displayed for the exhibition.

The publications featured in this case are the first editions of several of his works, such as his Journey to North Wales, though it also includes edited volumes such as The Beauties of Johnson, which organizes of some of his more powerful writings, and snippets from works where he was frequently quoted, such as Life of Johnson, etc. Considering the amount of writing he published, with hundreds of contributions to periodicals and the first edition of A Dictionary of the English Language over 18 inches thick, the entirety of his work could hardly be amassed in one exhibit case.

Samuel Johnson, who is featured in this documentary, was a dear friend of James Boswell and the writer of A Dictionary of the English Language. The dictionary became the new standard for the English language, and remained such until the publication of the Oxford English Dictionary in 1888. 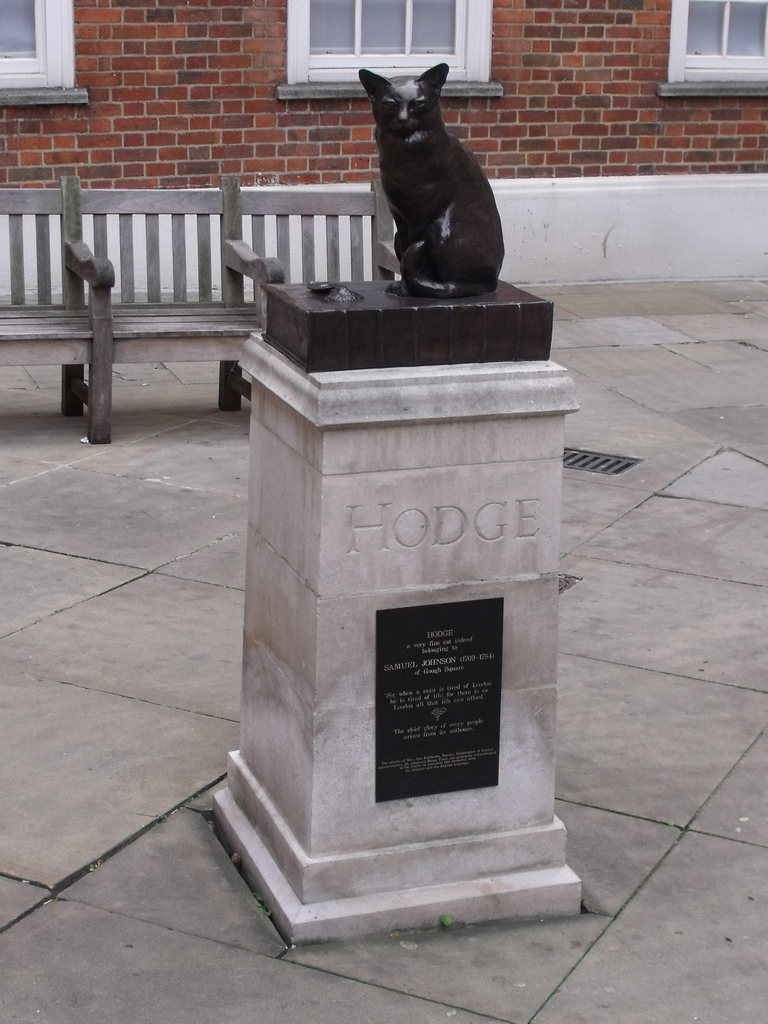 Copyright Elliot Brown, retrieved via Flickr.  A statue of Hodge, Dr. Johnson's beloved cat, on top of his Dictionary of the English Language, facing the Johnson House in Gough Square.