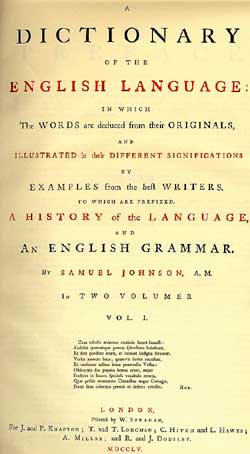 The title page of A Dictionary of the English Language, First Edition (1755).

Published in 1755, Samuel Johson's A Dictionary of the English Language is widely regarded as one of the most important works of lexicography. What was revolutionary is that he succeeded in producing a survey of over 40,000 words, accompanied by thorough analysis, quotes from significant literary works for examples of usage, and often illustrations. This feat was completed in eight years with only six assistants.

The content of A Dictionary of the English Language was a drastic departure from the dry and disorganized dictionary tradition, and much more useable than previous works. Johnson omitted some of the more antiquated, infrequently used words, and defined those that remained with the way they were used in practice, rather than what was 'proper.' This approach resulted in a reference book with universal appeal outside of academia. And though his definitions were often written in elegant prose, Johnson did not assume that his readership would be limited to elites and thus made sure to maintain some amount of simplicity.

Similar to the manner in which Boswell infused his own character into Life of Johnson, traces of Johnson are visible throughout A Dictionary of the English Language. In Shakespearean tradition, Johnson invented several of the words featured in the dictionary. He also quoted famous writers such as the Brothers Grimm, but he was known to edit the excerpts if they did not precisely fit the usage he sought to convey. Johnson's biases and sense of humor were reflected in many of the definitions, making for a much more enjoyable dictionary-reading experience.

A view of Case XI as displayed for the exhibition.

The above image depicts Gogh Square in London. To the far left is the Johnson House, where Samuel Johnson resided. The building is now a museum and charity that offers educational programming, workshops, and events to the public.

Some of the lesser-known quirks of A Dictionary of the English Language are as follows: 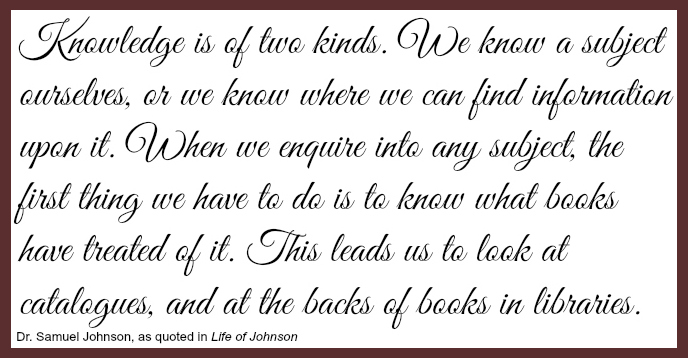 Johnson was known by many for his sharp tongue and wit, and A Dictionary of the English Language was no exception. Below are some of his remarks from the dictionary, with regards to his favored topics of conversation.

Politics:
"Politician: 1. One versed in the arts of government; one skilled in politicks. 2. A man of artifice; one of deep contrivance."
"Tory: One who adheres to the ancient constitution of the state, and the apostolical hierarchy of the church of England, opposed to a Whig."
"Whig: The name of a faction."

Foreign peoples:
"Oats: A grain, which in England is generally given to horses, but in Scotland appears to support the people."
"Monsieur: A term of reproach for a Frenchman."

Himself:
"Lexicographer: A writer of dictionaries; a harmless drudge that busies himself in tracing the original, and detailing the signification of words."
"Dull: Not exhilaterating (sic); not delightful; as, to make dictionaries is dull work."

Things he found particularly distasteful
"Stoat: A small stinking animal."
"Stockjobber: A low wretch who gets money by buying and selling shares."
"Tonguepad: A great talker."