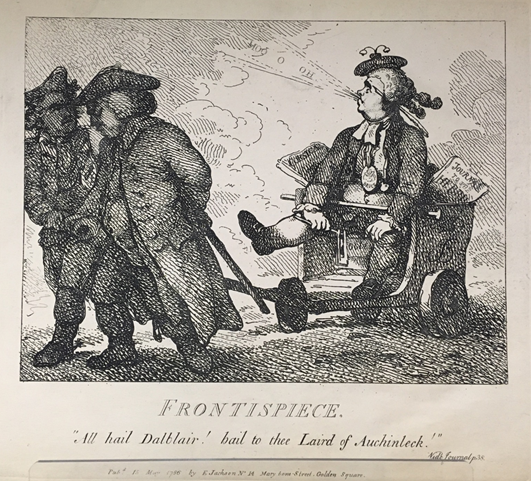 The image above shows Boswell in a go-cart, being dragged along by Johnson and Paoli. Beneath is inscribed “All Hail Dalblair! Hail to thee, Laird of Auchinleck!” 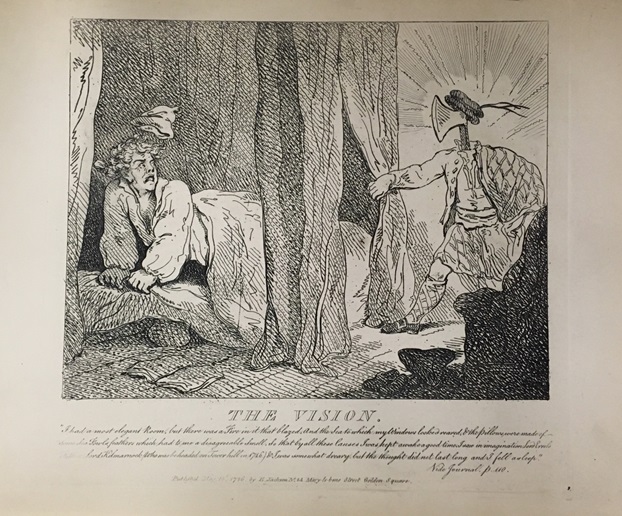 "I had a most elegant room; but there was a fire in it which blazed; and the sea, to which my windows looked, roared; and the pillows were made of the feathers of some sea-fowl, which had to me a disgreeable smell: so that, by all these causes, I was kept awake a good while. I saw, in imagination, Lord Errol's father, Lord Kilmarnock (who was beheaded on Tower Hill in 1746), and I was somewhat dreary. But the thought did not last long, and I fell asleep." 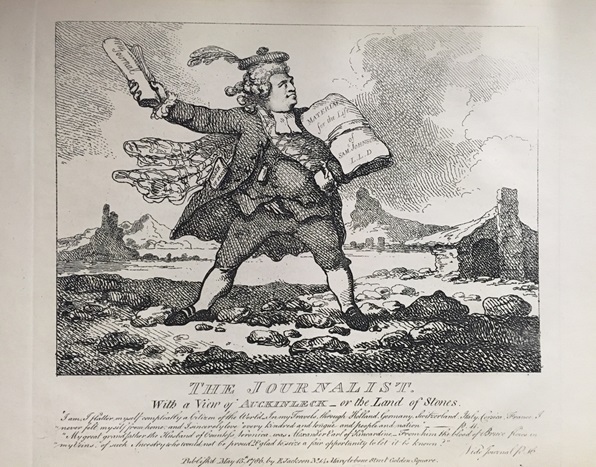 The Journalist, with a view of Auchinleck; or the Land of the Stones, Thomas Rowlandson. From "Twenty Caricature Plates," 1768.

In the image above, Boswell is depicted in Highland costume and a heroic attitude, with his Journal for a claymore sword and his manuscript materials for the Life of Johnson for a shield, accompanied by the following quotation:

“I am, I flatter myself, completely a ‘Citizen of the World.’ In my travel through Holland, Germany, Switzerland, Italy, Corsica, France, I have never felt myself from home; and I sincerely love every kindred tongue and people and nation... My great grandfather, the husband of Countess Veronica, was Alexander, Earl of Kincardine, that eminent Royalist whose character is given by Burnet in his History of his own Times. From him the blood of Bruce flows in my veins. Of such ancestry who would not be proud?”

A view of Case VI as displayed for the exhibition. 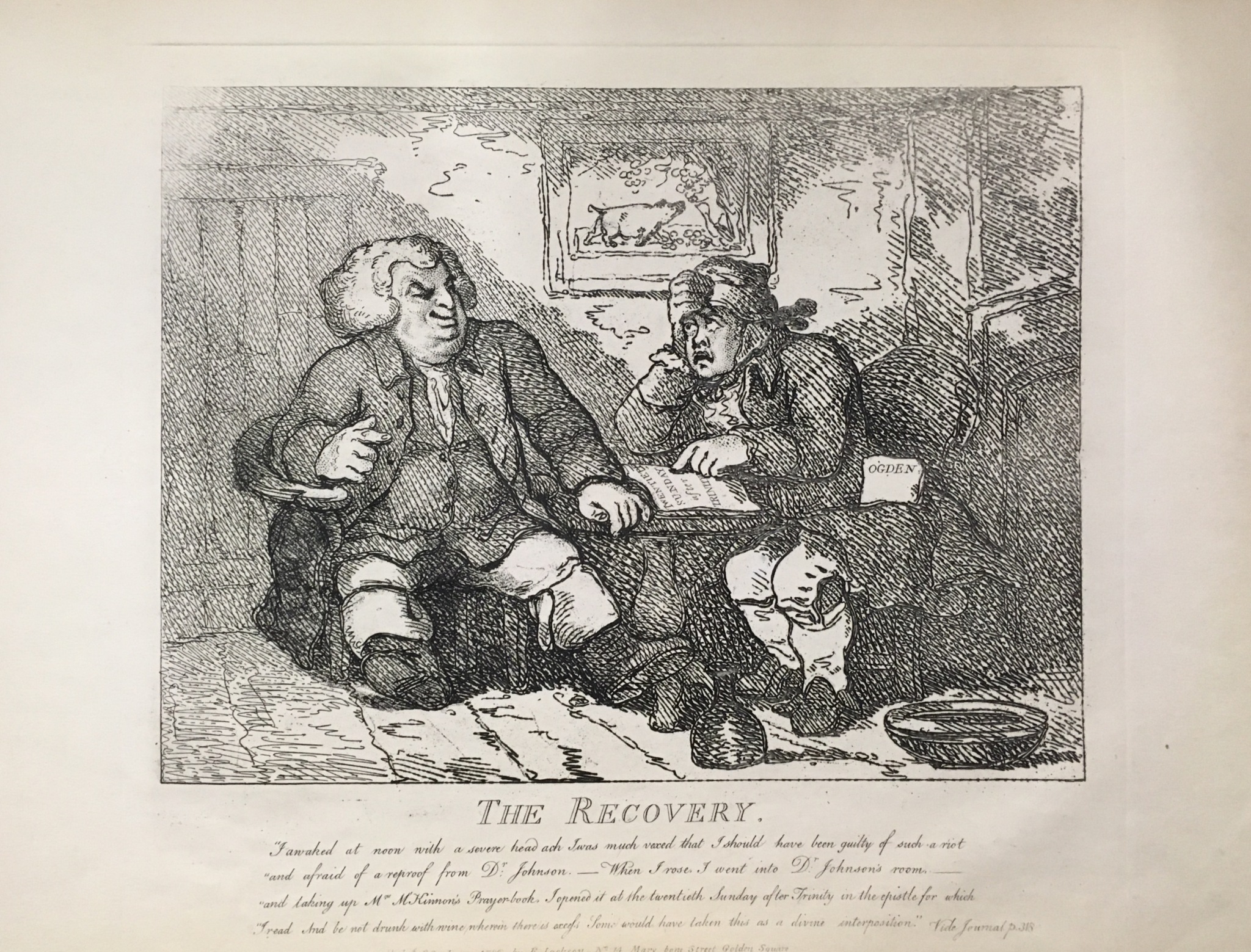 Depicting an episode in which Boswell finds himself ill after a night of drinking, The Recovery is accompanied by the following excerpt:

"I awakened at noon with a severe headache. I was much vexed that I should have been guilty of such a riot, and afraid of a reproof from Dr. Johnson- When I rose, I went into Dr Johnson's room, and taking up Mrs M'Kinnon's prayer-book, I opened it at the twentieth Sunday after Trinity, in the epistle for which I read, 'And be not drunk with wine, wherein there is excess.' Some would have taken this as a divine interposition."

The five prints in Case VII by Thomas Rowlandson are from the nearly complete set of eighteen illustrations out of twenty:

The map "Footsteps of Johnson," which depicts the route that Boswell and Johnson took on their tour through Scotland, is also displayed, as well as a facsimile of a handwritten letter that Dr. Johnson wrote to an old friend, John Taylor, summarizing his experiences in Scotland.

The publication of Boswell’s Tour in the Hebrides was the signal for a sudden outbreak of caricature and parody. A portrait of Dr. Johnson in his Traveling Dress, appeared in 1785, done from life and engraved by T. Rotter. About a year later a satire was published, Twenty Caricature Plates to Illustrate the "Tour to the Hebrides" by James Boswell, which contains twenty plates, designed and etched by Thomas Rowlandson. Each plate refers directly to a passage in the Journal.

Rowlandson was a classically trained artist, spending six years at the Royal Academy of Arts. Economic strain led him to focus on commercial art pieces such as illustrations for magazines and novels, and later on equally marketable caricatures. Rowlandson is best known for his caricatures of John Bull (a personification of Great Britain), as well as for his portrayal of more risque subjects. 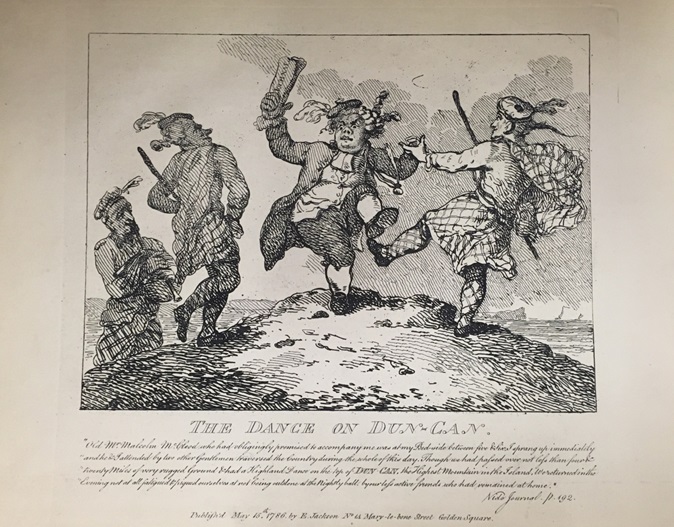 The Dance of Dun-Can, Thomas Rowlandson. From "Twenty Caricature Plates," 1768.

"Old Mr Malcolm  M'Cleod, who had obligingly promised to accompany me, was at my bedside between five and six. I sprang up immediately, and he and I, attended by two other gentlemen, traversed the country during the whole of this day. Though we had passed over not less than four-and-twenty miles of very rugged ground, and had a Highland dance on the top of Dun Can, the highest mountain in the island, we returned in the evening not at all fatigued, and piqued ourselves at not being outdone at the nightly ball by our less active friends, who had remained at home."