The UE Fights for Women Workers 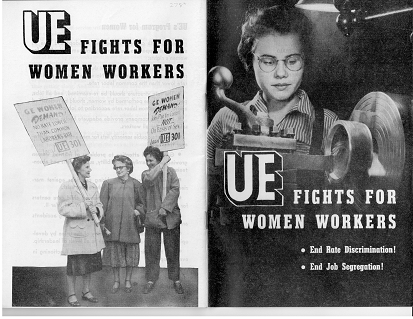 In 1952, the UE published a booklet that discussed discrimination in the workplace and how it affected both male and female workers. This pamphlet was written by Betty Friedan, author of The Feminine Mystique and co-founder of the National Organization for Women. Friedan wrote for the UE News during the 1940s and 1950s. In "UE Fights for Women Workers", Friedan presented reasons for discrimination and highlighted the plight of minority women in the workplace. She even suggested ways to end discrimination within the workplace.

The entire "UE Fights For Women Workers" can be found in folder 6 of the Evelyn O. Darin collection at the Archives Service Center.

Originally founded in 1920 and called the Hotel and Restaurant Employees International Alliance and Bartenders International League of America Local 237, the local union was renamed to the Hotel and Restaurant Employees and Bartenders International Union Local 237 in 1947. It represented cooks, waiters, maids, bellboys, and other workers within Pittsburgh’s hotels. Women were mentioned relatively little within the documents surviving from this union, yet they were present within the hotel workforce. There was exceptional discrimination between male and female workers within hotels.

The “Union Contract October 1, 1948 between Pittsburgh Hotels Association and Hotel and Restaurant Employees Alliance, Local Union No. 237” was evidence of this discrimination. Article 5 of the contract, dubbed “Hours”, determined the hours that were to be worked by both male and female employees. Women were designated not to have “in excess of forty-four hours per week”, and women between the ages of eighteen and twenty-one could not work beyond nine o’clock at night. Men could not work past forty-eight hours per week. Unlike women, men were not excluded from working past a certain time, regardless of age.

One of the most apparent areas of discrimination within the contract was the “Classification and Wage Rates: Hotel Sheraton”. Men and women who performed the same roles within the workforce were paid different daily and monthly rates. Linen “girls” had a daily salary of $5.28 and a monthly salary of $137.32. Linen “men”, however, made $6.42 daily and made $166.87 monthly. The daily wage of female pot washers was $5.245, while male pot washers made $5.70. Monthly, female pot washers were paid $136.37 and male pot washers were paid $148.13. Finally, busgirls earned $4.20 daily while busboys earned $4.31, and monthly the women earned $109.20 while the men earned $112.06. For jobs with identical titles and equal work, women always made less than the men. Regardless of how little or great the accumulative amount that this pay gap prevented women from earning, it was still discrimination based upon sex and not on the abilities of the workers themselves.

The Retail, Wholesale, and Department Store Union Local 101 was chartered on June 1, 1937. The union organized employees of local department stores Rosenbaum's, Frank and Seder's, and Kaufmann's.

However, there are examples of positive union interaction for women. There are records of a "Specialty Store Organizing Committee", in which multiple women were involved. Women named as part of this committee included Dorothy Earle, from the North Side Betty Gay Shop; Bertha Burns, from the York Shop; Edith Friedrich, from Rosenbaum's; Grace Snyder, from Boyd's; and Alice Pesik, from Rosenbaum's. These women represented a variety of shops and a variety of women who worked within those shops.

Pittsburgh Typographical Union No. 7 is the oldest continually existing labor union in Pittsburgh, tracing its roots back to the Journeymen Printers of Pittsburgh in 1836. It was one of the fourteen founding locals of the International Typographical Union (ITU) in 1852. Although there are very few explicit mentions of women within the scant archival material of the ITU, women were active members within the Union.

There are several Members’ Traveling Cards, dating between 1925 and 1940, which denoted the presence of women such as Elizabeth Cook, Anne B. Adams, and Mary L. Jonas. Additionally, there were Honorable Withdrawal Cards of the International Typographical Union, which included women such as Elizabeth Auchterlonie and Dorothy Stange. These women may not have gained international, national, or even city-wide recognition for their involvement in labor and the Typographical Union, yet they were active within the oldest continually existing labor union in Pittsburgh.

The UE was one of the earliest unions concerned with the rights and advancement of women workers, as indicated by the 1952 pamphlet "The UE Fights for Women Workers". Within the research subgroup of the extensive UE records available at the Archives Service Center, there are multiple pamphlets and articles discussing women workers.

The Woman Worker, a newsletter from the United States Department of Labor Women's Bureau, focused on working women's issues. In volume 20, number 6, which was from November 1940, it was noted that about 9,100 women were seeking employment in metal-factory work. According to the newsletter: "The metal-factory work in which women job-seekers have experience includes work in rolling and stamping, and as machinists, filers and grinders, welders and flame-cutters, furnacemen and smelters, tinsmiths and coppersmiths, tool-makers and die sinkers, blacksmiths and forge-men, molders and other foundry, machine-shop, and fabrication work, without doubt including assembling parts and inspecting for a perfect product, as must be done in most manufacture." Minimum wage for leather manufacture was 40 cents, while 37.5 cents was recommended as minimum for embroidery manufacture.

One of the papers included within the collection is a Public Affairs Pamphlet from the National Federation of Business and Professional Women's Clubs, entitled "Should Married Women Work?" Released in 1940, the informational booklet argued that prejudice against married women workers was strongest in middle-class homes. Many women who worked outside of the home primarily did so because of economic need, rather than to raise a personal standard of living. However, as noted previously, married women were often discriminated against while searching for employment. Unmarried women were preferred. Unsurprisingly, the married status of a man did not affect his status of employment.

In addition to the research materials of the UE, there are also informational materials about the status of women in the records of UE Local 601. A local supplement sheet from the late 1960s discussed the status of married women within the workplace. Under "Section H- Married Women", it was noted that "When a woman becomes married, she will have no seniority rights with regard to reduction in force, transfer or upgrading but she may otherwise continue employment as long as she is able to perform her work satisfactorily". Presumably, a married woman would soon fall pregnant and have to leave the workforce. Additionally, "Women who become married are to report this change of status to their supervisor. An employe[e] who fails to report her marriage will be discharged if it established that such employe[e] received benefits which she was not entitled under this provision..." Even though the company did not say that it would investigate the marital status of a woman should she want not to disclose it, a woman faced harsh consequences if she chose not to publically declare her marital status.

Another issue that greatly concerned women was maternity leave. Information was provided regarding pregnancy and maternity leave. In 1968, according to the Signal and Communications Division WABCO: Division Policy Regarding Pregnancy, a pregnant employee was required to notify her supervisor of her condition prior to six months of her condition. An employee who failed to notify her supervisor with documented evidence from a doctor faced in "immediate termination with no re-employment rights". If an employee did not have a year of seniority, she faced employment termination. However, women were granted full pay for two weeks, plus earned vacation pay, as part of their maternity leave. This was limited to 2 leaves at most.

This maternity policy changed over the years. In 1972, pregnant employees were required to notify their employers as soon as possible, but not after 3 months of conception. They continued to work as long as they were physically able to do so, and the period of time following delivery was not to exceed 6 weeks. Following the return to work, the employee was to be returned to her former job or one of equal status and pay, provided her seniority and capabilities entitled her to such a position. 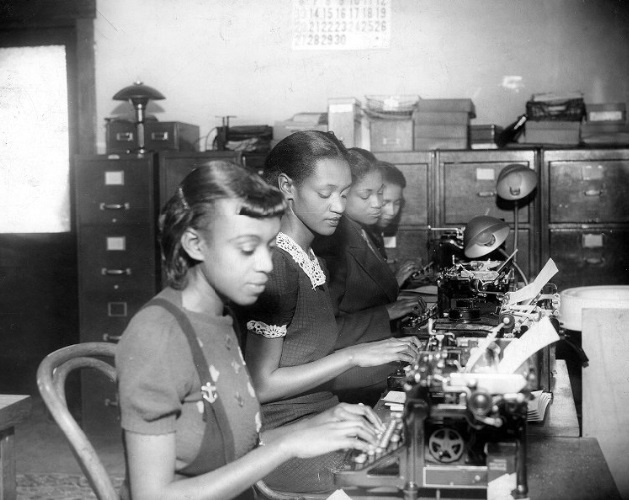 The International Brotherhood of Teamsters, Chauffeurs, Warehouseman, & Helpers of American Union Contracts was dominated by male members. During the late 1950s, women rarely worked within any of the occupations encompassed by this union. Because of this, there are barely any mentions of women workers in the current collection. 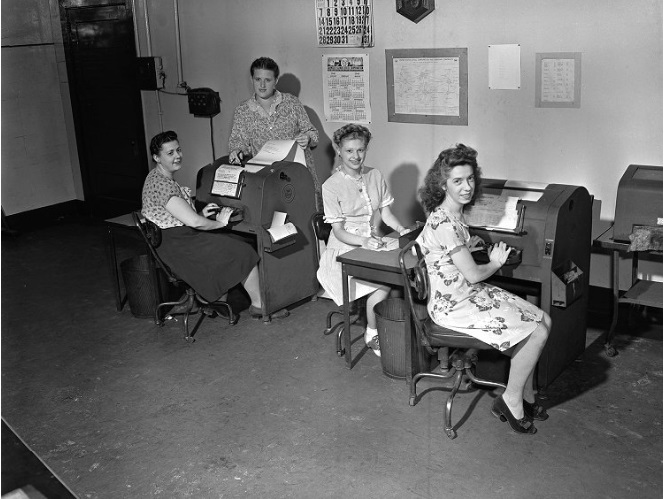