“As women, we were really on the verge of being accepted and that was a big change. I think, five years of being in the mills, the guys working with us, some women making it, some women not making it, the women that were making it were really good at their jobs. [We] were being respected for the work we were doing. [We were] becoming an integral part of the community, [and] we weren’t just sex objects, or objects to be made fun of. We were really people who were part of that community… the mill culture was transformed by our presence, and I think in some positive ways.”

-Steffi Domike, in an interview for the Pittsburgh Oral History Project

Steffi Domike was and is very active in organized labor within Pittsburgh. She became the first woman janitor within United States Steel’s Clairton Coke Works, where she eventually became an electrician’s assistant. Domike worked at Clairton Coke Works until she was laid off with thousands of other mill workers in 1982.

While she worked at Clairton Coke Works, Domike was an active members of USWA Local 1557 and represented the local in the USWA District 15 Civil Rights Committee. She ran for secretary of the local in 1979, was involved with the Steelworkers Stand Up newsletter, contributed to Women of Steel newsletters, and organized meetings about women’s rights. After being laid off, Domike worked for the Mon Valley Unemployed Committee. She also enrolled in the Art Institute and Pittsburgh Filmmakers and became a documentary filmmaker. Some of her works include The River Ran Red; Women of Steel; the WQED series Labor’s Corner; and Working Pittsburgh. Domike is still active today as an artist and a civil rights activist. 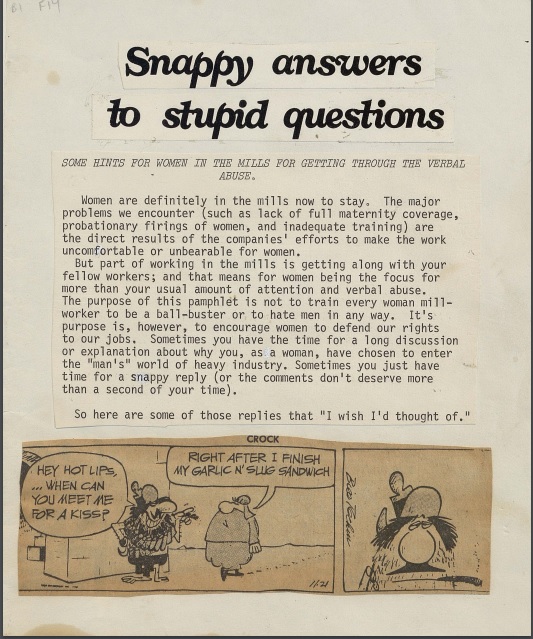 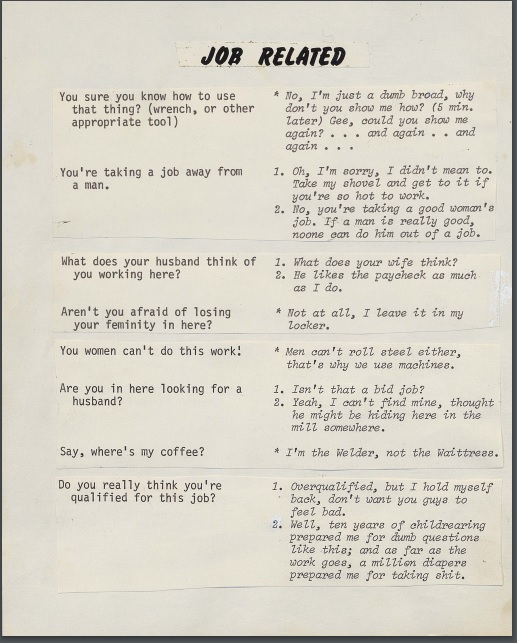 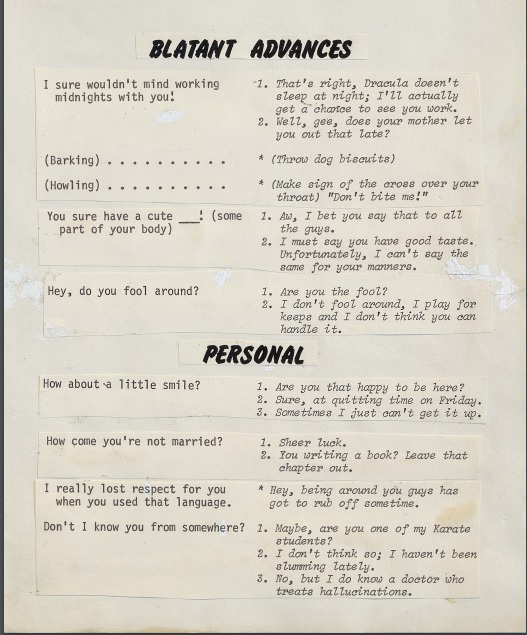 “When we took these jobs, we realized we would be working with some men who didn’t want us there. But we didn’t take these jobs to be liked or disliked; we took those jobs for the same reasons men did- to support ourselves and feed our families.”

-Marene Huddleston, Local 1397, in the 1st issue of the Women of Steel newsletter

The Women of Steel newsletters focused on issues directly relating to women workers of the steel industry, including discrimination based upon sex. The first issue of the Women of Steel newsletter was issued in March 1979. Of the topics discussed within the issue, discrimination and problems within the workforce due to pregnancy were key subjects. The second issue of the newsletter was issued in May 1979, and it also focused on affirmative action, safety issues, and pregnancy.

The articles and material of the newsletters were dependent upon submissions from women within the workforce, so issues were not released regularly. Instead, issues were released when enough material had been submitted. Domike often contributed materials and articles to these newsletters. 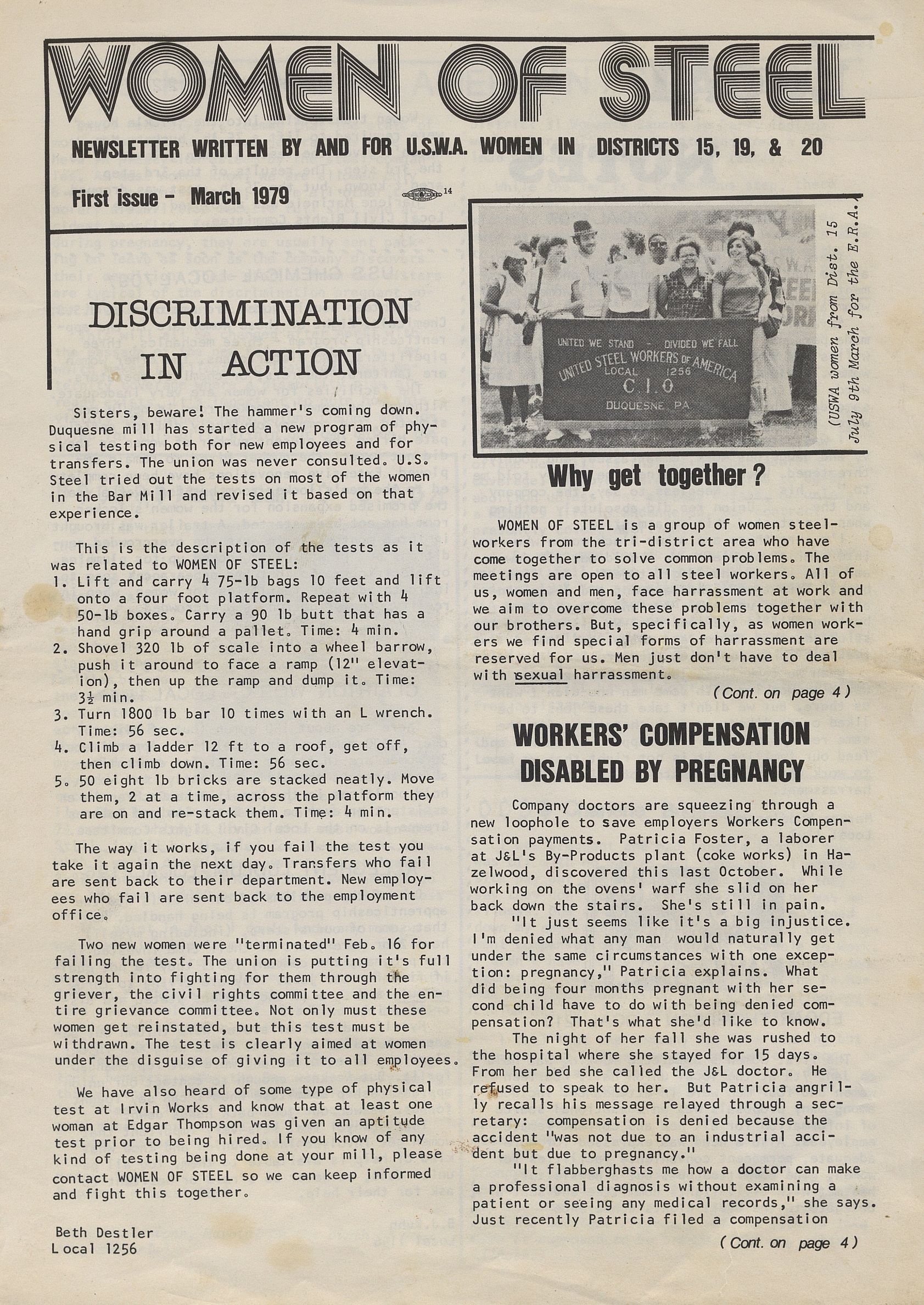 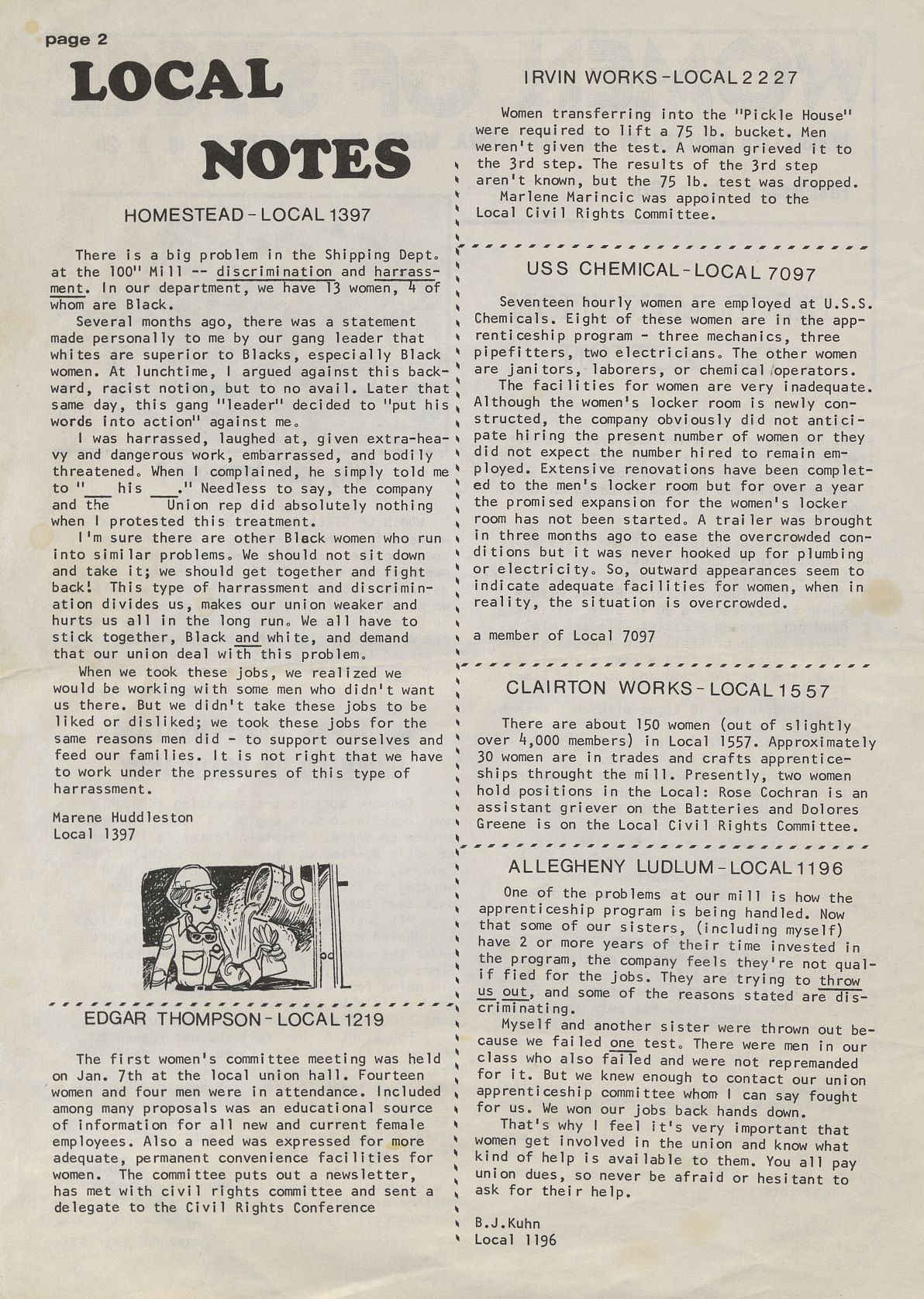 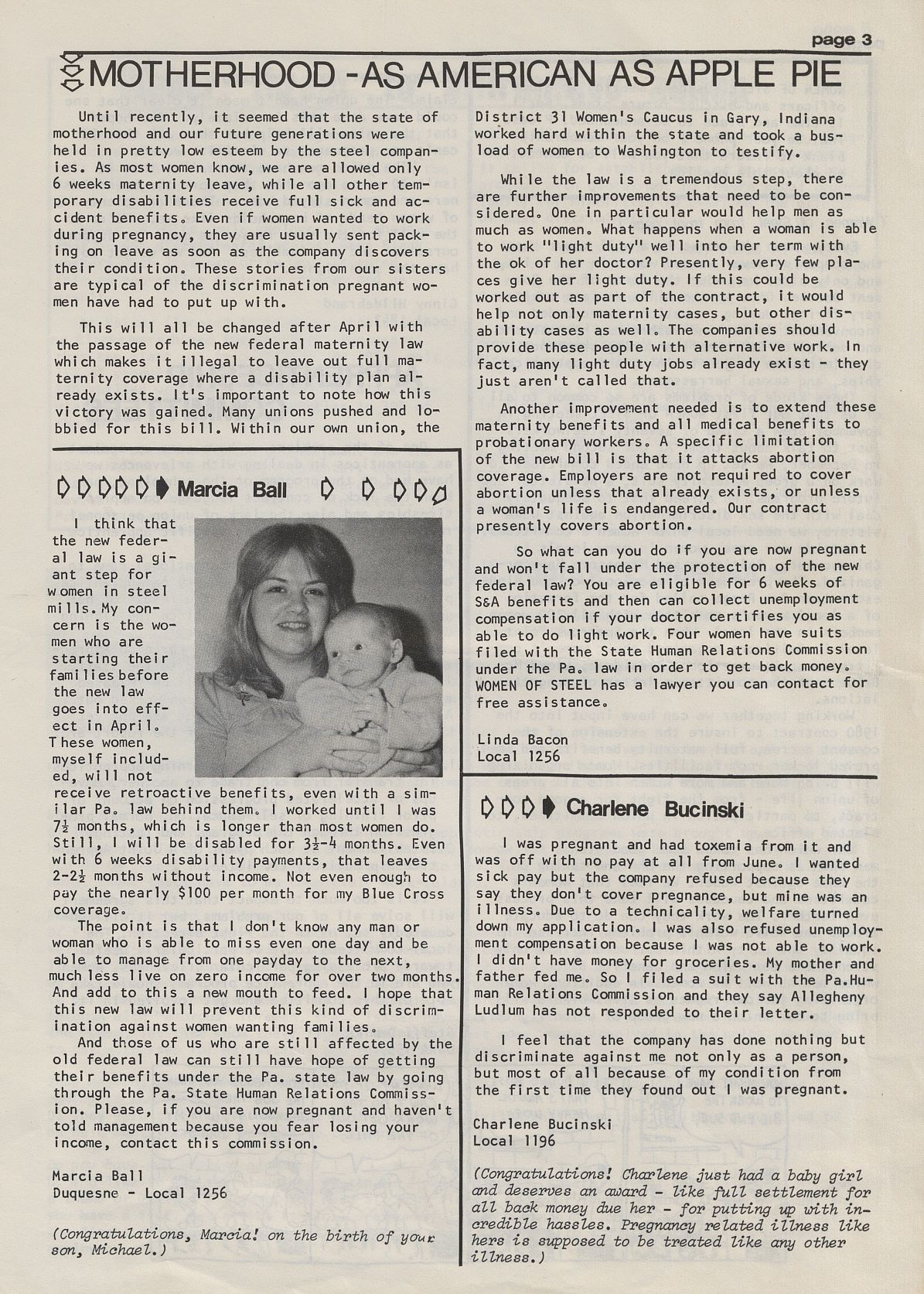 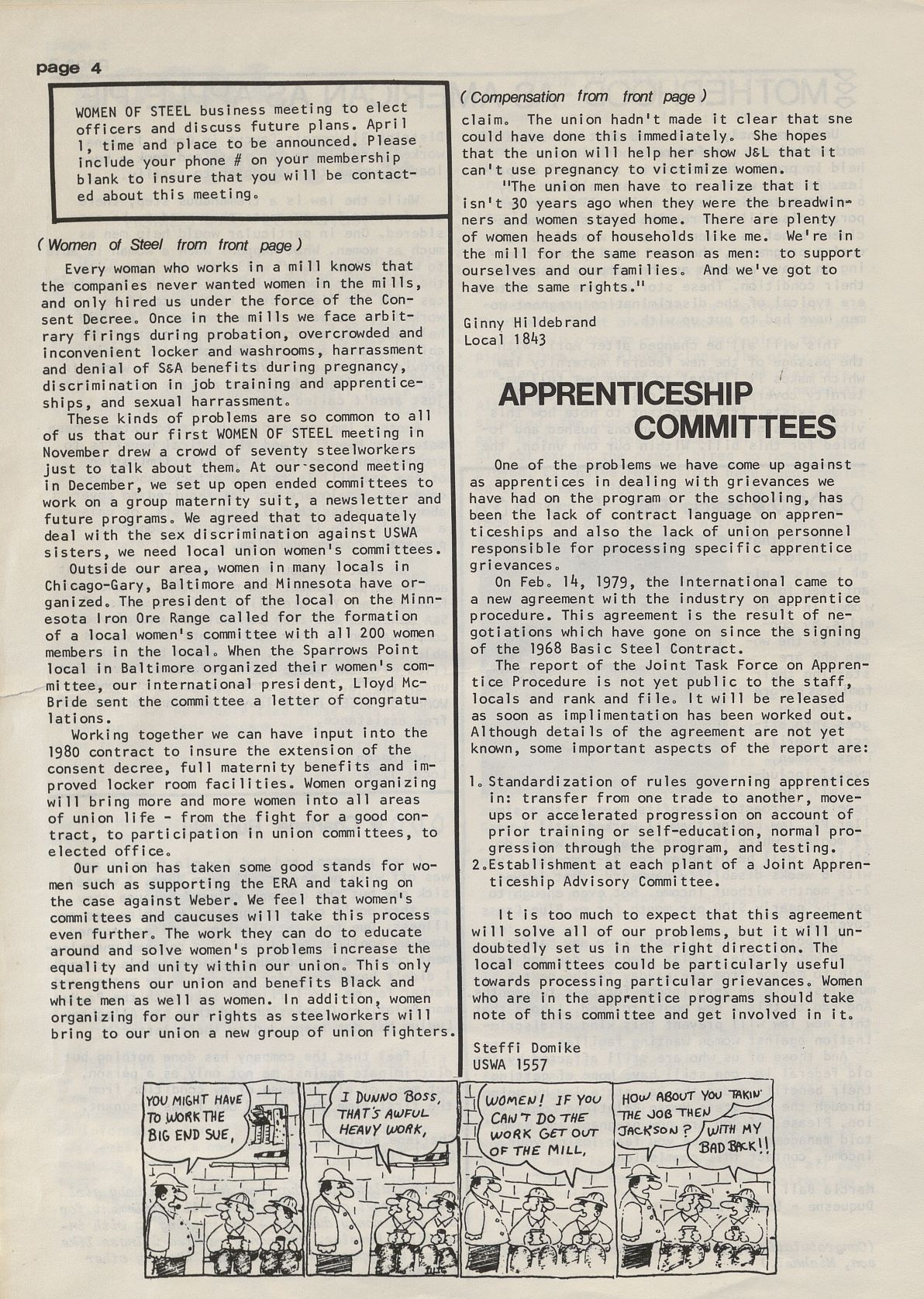 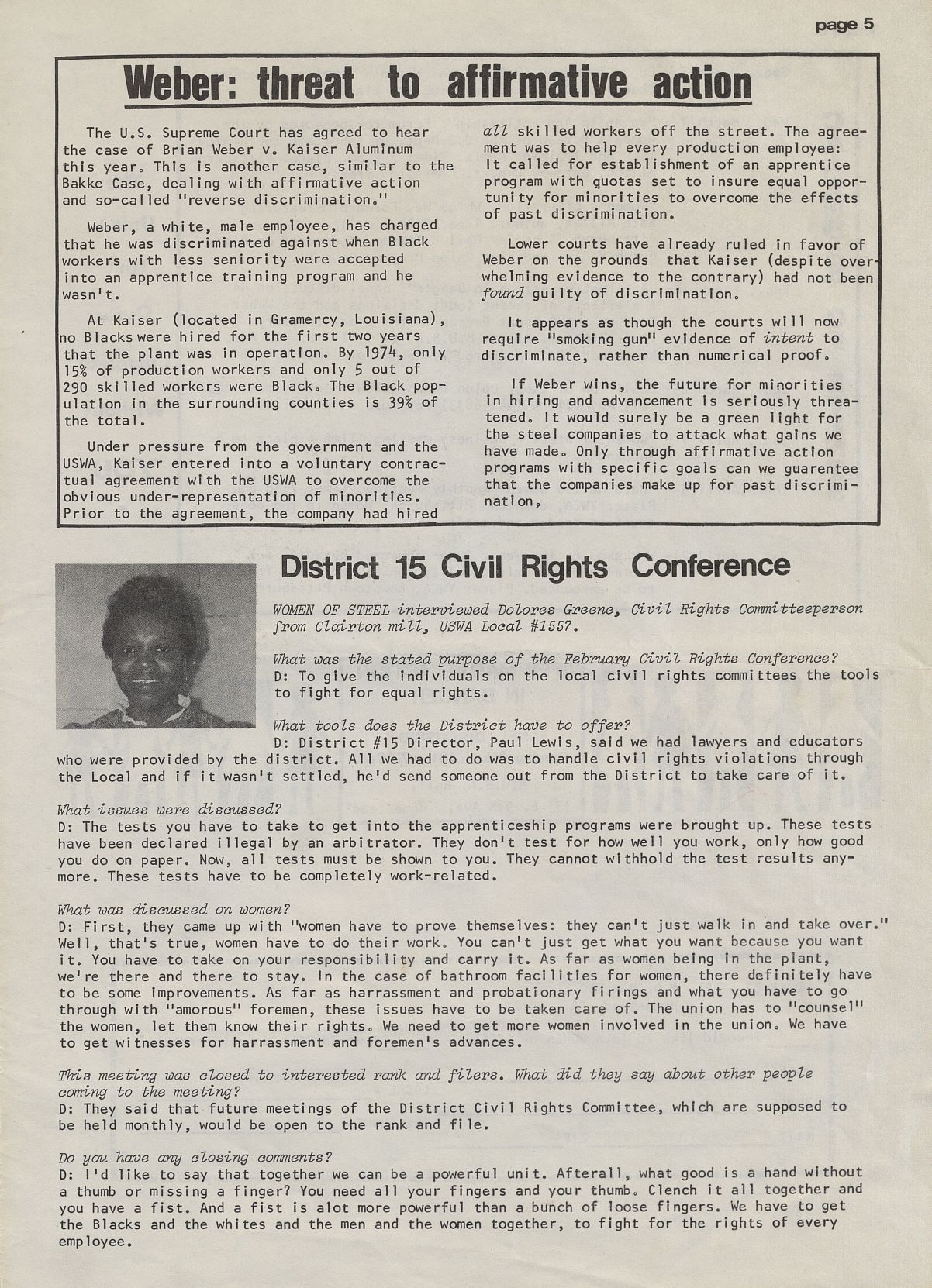 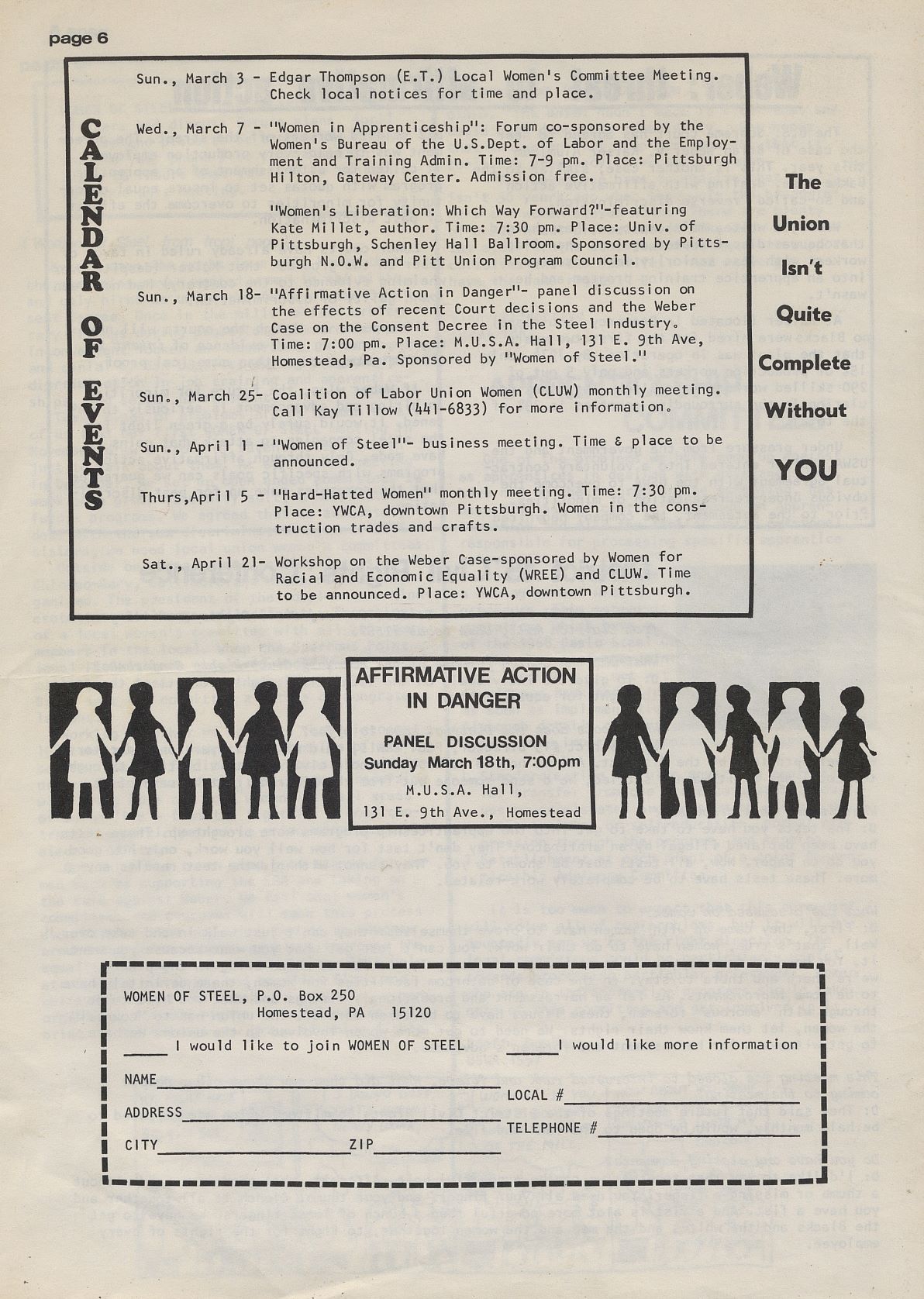 First edition of the Women of Steel newsletter

Women of Steel is a documentary that was directed by Randy Strothman and produced by Mon Valley Media in 1985. The film narrates experiences of the women who worked within the Pittsburgh area steel industry. This documentary mostly focuses on women who previously worked in the steel industry, although there were some women still working in the mills in 1985. Sherry Ortallano was one of the few women in the Pittsburgh area still working in the steel mills at the time this documentary was produced. However, even though Ortallano was trained to hold a specific position, she only worked as a laborer.

Women and minorities were among the last people hired in the steel mills and the first people to be fired when the mills began closing. Although most women worked because they needed the money, companies and male workers often assumed that women did not need these mill jobs. However, as steelworker Sheryl Johnson stated, women were not there because of “women’s issues”. Women earned better pay working mill jobs than with working more traditional women’s jobs, and steel work created new opportunities for women. Higher wages meant independence to many of the women supporting families below the poverty line.

For the women who lost their jobs after the mill shutdowns, there were limited work opportunities. Women received less pay and less respect for the more “feminine” jobs that they were able to get. Former steelworker Pat Turnell was only able to gain employment as a waitress, which was a job with very little benefits for her and her family. Although the steel industry was difficult for the women who worked within it, mill jobs brought many benefits and opportunities for them. The closing of many steel mills was detrimental to the lives of all former steel workers, yet women were particularly affected by this loss.

Domike was an active member of United Steelworkers of America Local 1557, and at one point she was a candidate for recording secretary of the local.  Domike was also a part of the Committee of Concerned Unionists. Because of this, her collection contains many articles, leaflets, newsletters, newspaper clippings, and flyers pertaining to the union.She created "Snappy Answers to Stupid Questions", a pamphlet that provided humorous responses to sexual harassment in the workplace. Domike also contributed to the Women of Steel newsletters, which were first released in 1979.

"A Woman's Place Is In Her Union" 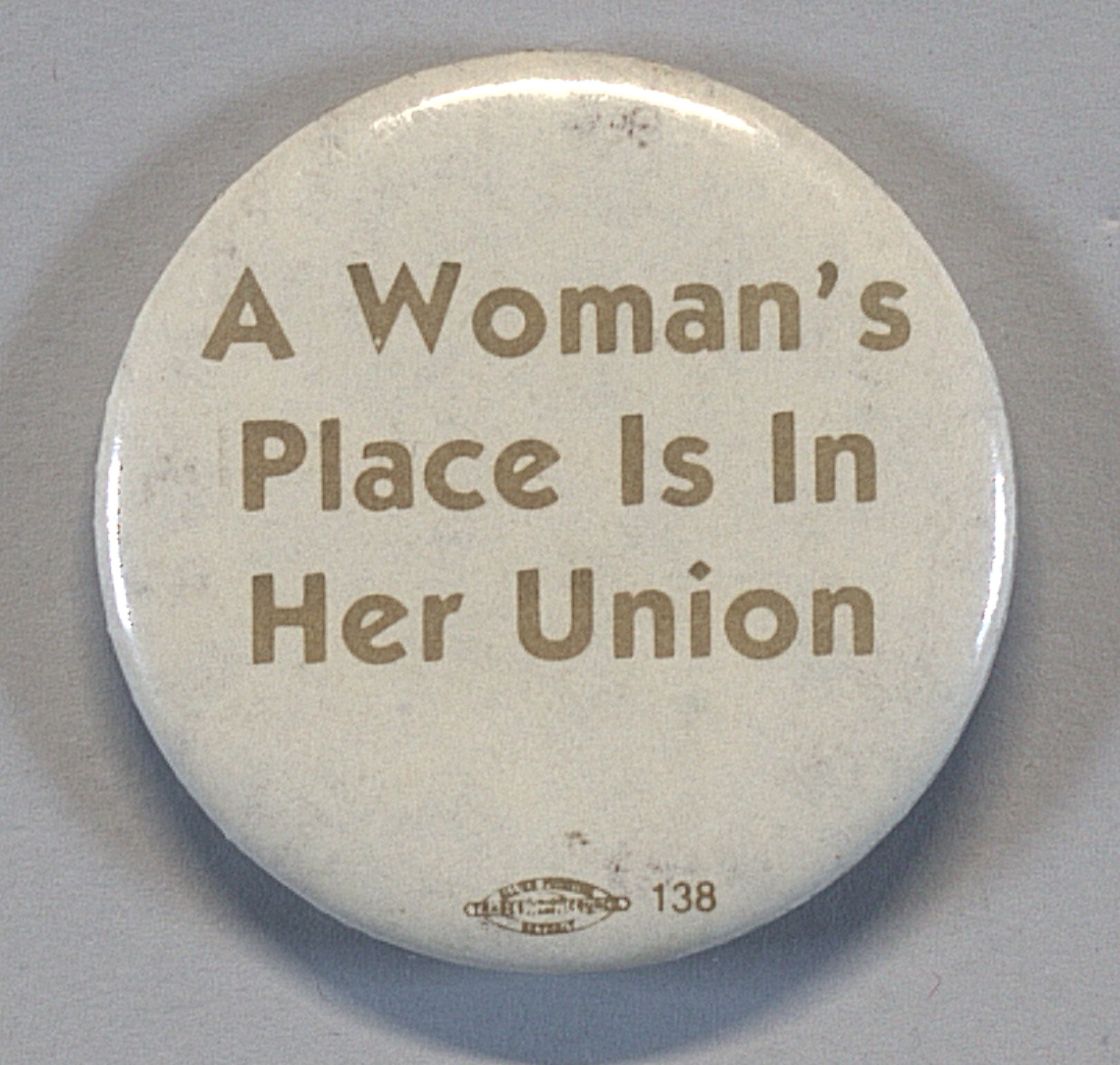 Crashin' Out: Hard Times in McKeesport

Over the course of 7 weeks, the McKeesport Oral History Project researched, interviewed, and photographed thirty-five McKeesport residents. They found that married women of the 1930s who were forced to work usually still stayed within the domestic sphere and did domestic work. In the 1980s, women were forced to work in retail and food services. According to the McKeesport Oral History Project, both instances represented low wage jobs in which the employees could barely support their families and had no future in that job. Crashin' Out: Hard Times in McKeesport highlighted the lives of several individuals, including Bernadine Davis. 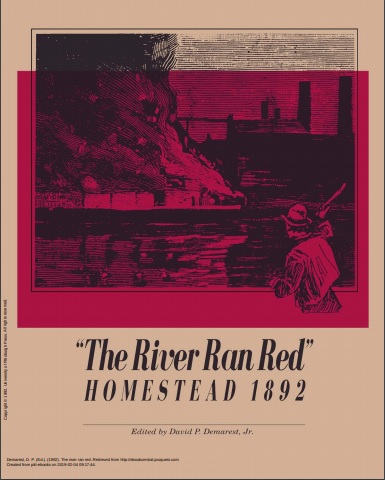 Domike was a co-editor and sidebar contributor to the book, The River Ran Red

Domike was the co-producer of The River Ran Red, a film that provided an account of the 1892 Homestead Strike. To produce the film, Domike extensively researched the topic. Because of this, there are photographs, research notes, press articles, and information regarding the production and release of the film within her collection at the Archives Service Center. There is also a book by the same name, printed in 1992, for which Domike was a co-editor. Domike's extensive research provides a very complete background and context from which to view the Homestead Strike. 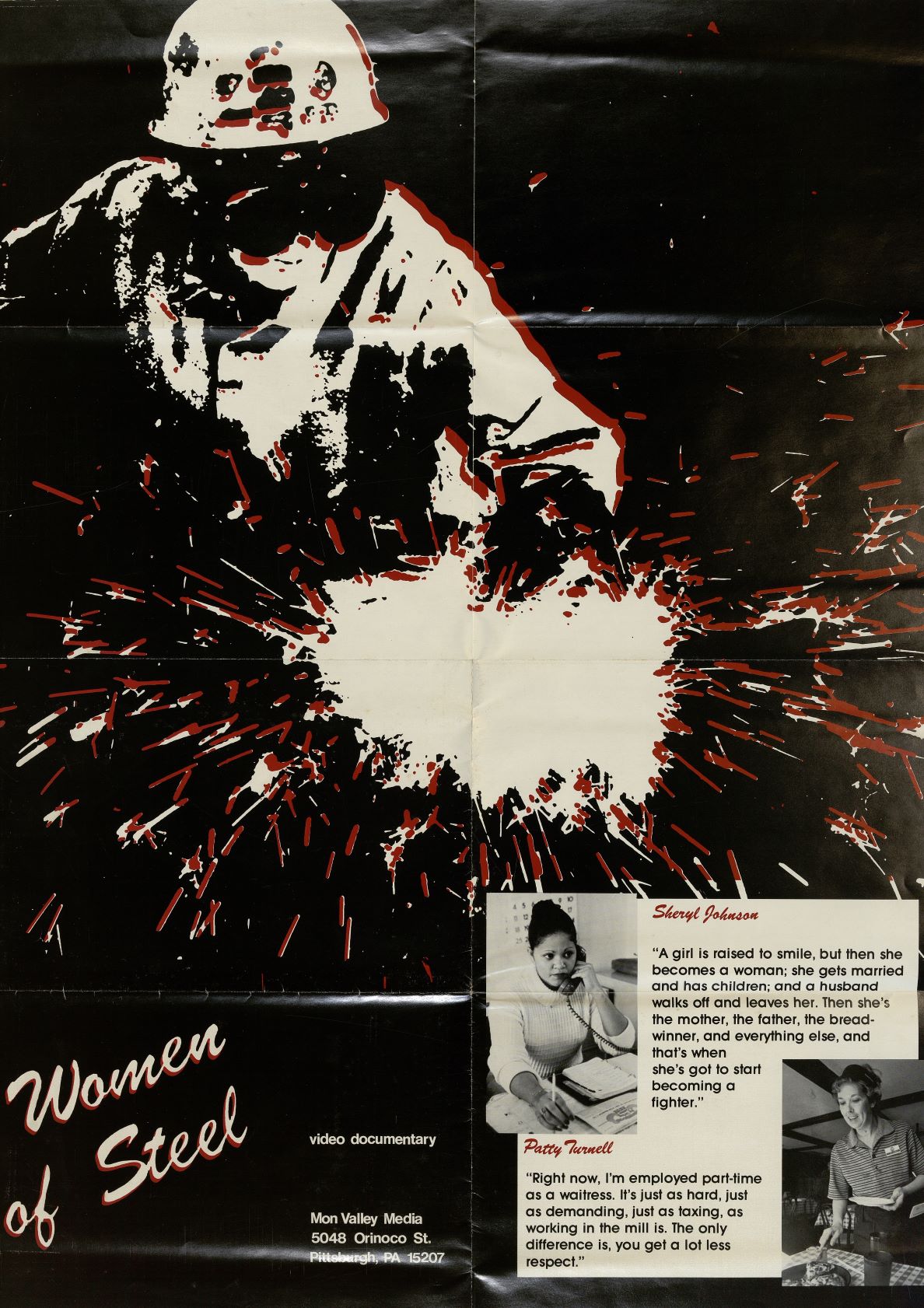