The Deindustrialization of Pittsburgh

Around 1960, industrialization in Pittsburgh began to decline. Although Pittsburgh had previously been ahead of the rest of the world in steel production, it began to fall behind. Companies failed to update outdated technology, choosing to invest money elsewhere. In an attempt to hinder the effects of deindustrialization, the Tri-State Conference on Manufacturing was created in 1979. However, by the mid-1980s many mills in the area were shut down. These mill closings resulted in a massive loss of jobs. The economies of many Pittsburgh areas and communities, such as McKeesport and Homestead, greatly suffered. Unemployment was high, and many people lived on unemployment benefits because they had no other choice. Those who were fortunate enough to obtain jobs often had to change their skill sets.

Women were especially affected by the deindustrialization of Pittsburgh. The steel industry had provided many women with new opportunities to gain higher paying jobs and to support their families. After they were laid off, many women had to return to limited, lower-paying, "pink-collar" jobs. These lower-paying jobs made it difficult for single mothers to provide for their families. However, there were many resources that were established for the communities affected by mass unemployment. The Mon Valley Unemployed Committee was established in 1982, and the Rainbow Kitchen was established in Homestead in 1984.

There were many individuals involved in organized labor and fighting the effects of deindustrialization during this time. There were examples of women who changed occupations and became involved in other jobs that largely involved men, such as Shirley Salata. Rosemary Trump was very active in organized labor. She was also a strong advocate for the rights of women within the workplace. Steffi Domike was similarly active in organized labor, and she became very interested in documenting the lives of the individuals who worked for a living. In addition to these women workers and unionists, there were others interested in helping working women. Former governor Dick Thornburgh was also interested and active in trying to further the cause of working women during his time in office.

Employment in the Workplace

Although many new working opportunities had arisen for women since WWII, many women were still inclined to gravitate toward certain professions. Oftentimes, these professions were lower-paying than the professions that men often chose. According to a survey completed by the Gallup Organization in 1985, women predominated in lower-paying professional jobs. These were professions such as teaching, nursing, and library science. Men tended to occupy higher-paying positions in law, medicine, science, engineering, and business. Additionally, employed women over the age of 40 were less likely to to be married than working men of the same age.

Because of this, organizations such as the Alliance for Progressive Action stressed the importance of a living wage for women. According to a flyer released by the organization, "Living Wage Legislation will directly affect women and other minorities because they are disproportionately affected by working poverty...Living Wage Legislation would increase income support for female-headed families, and increase access to education for poor women by allowing them to meet basic needs first."

Regulations of Hours and Conditions of PA Working Women 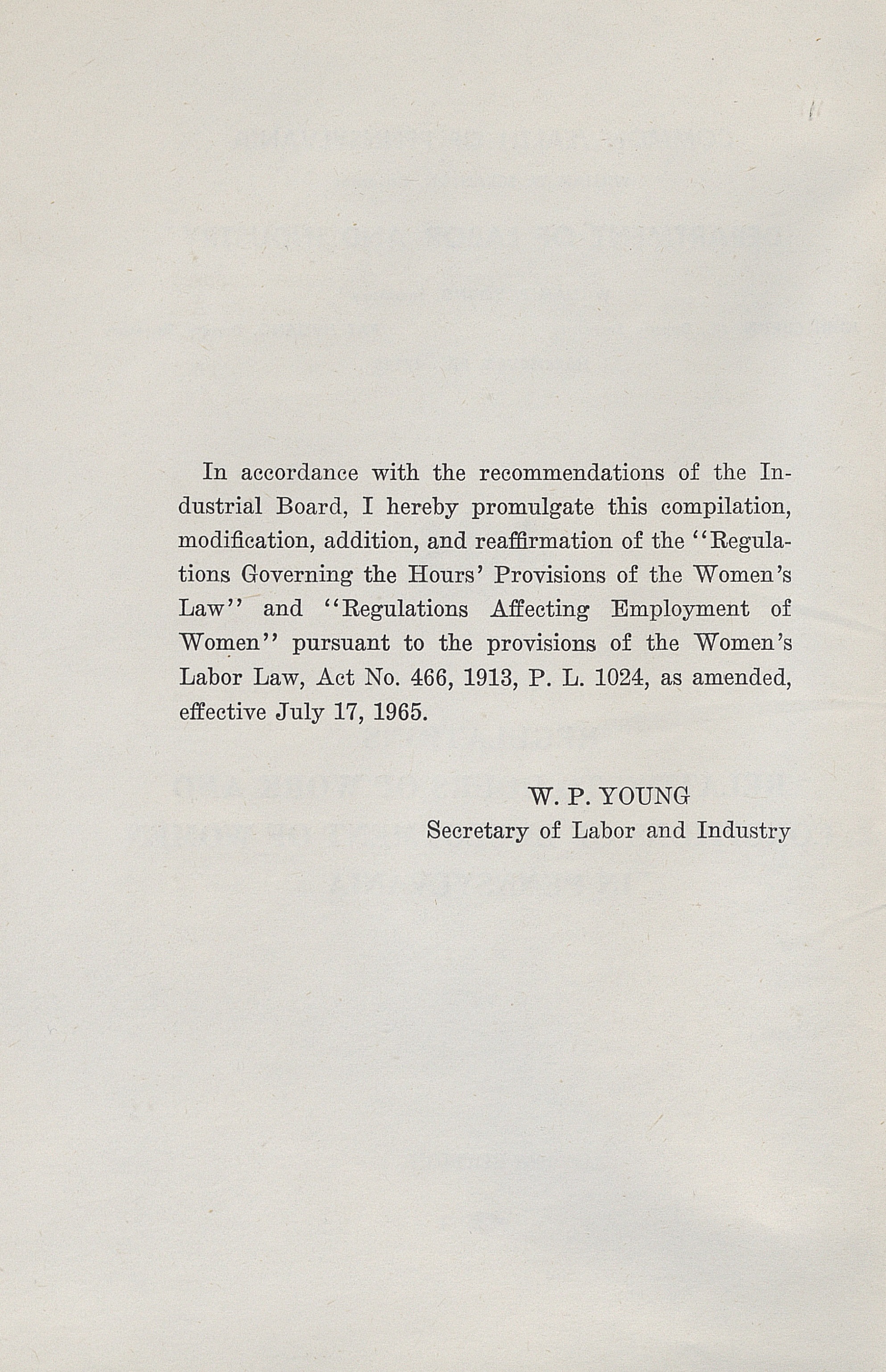 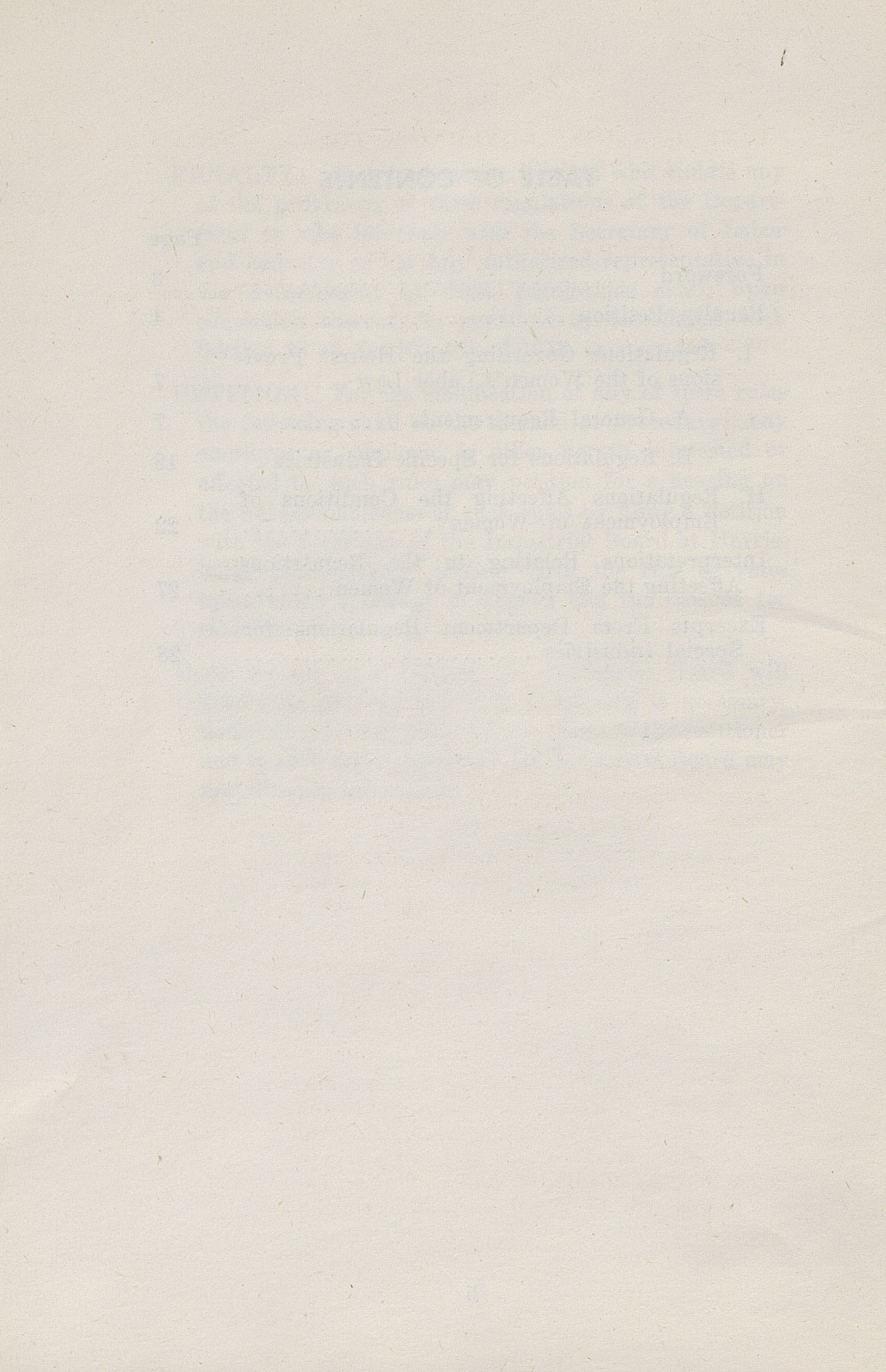 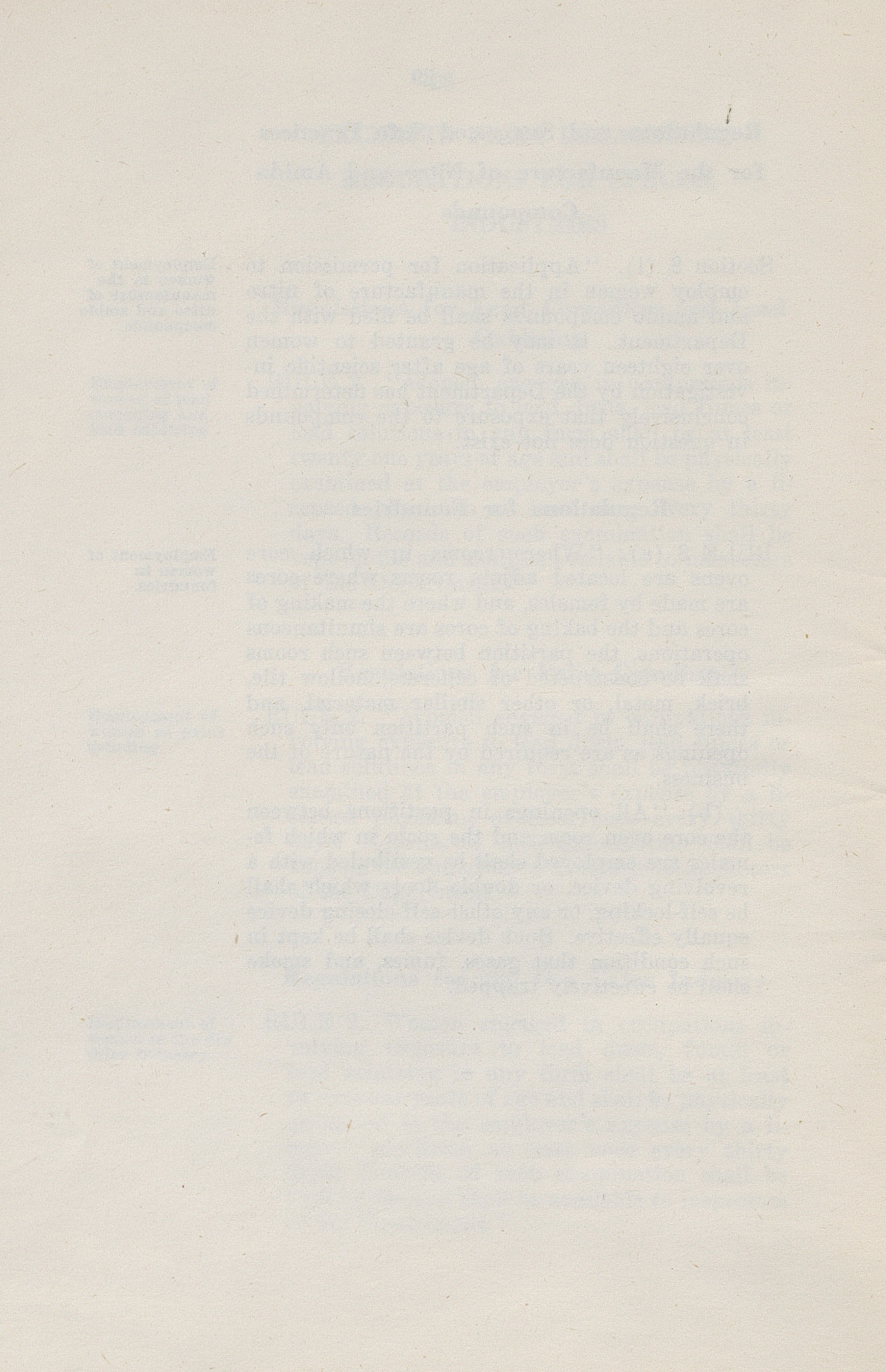 Written in 1965 under the governorship of William Scranton, this booklet details regulations and laws pertaining to working women. As written on page three, the informational booklet was written "In accordance with the duties imposed upon the Department of Labor and Industry by Act No. 466 of 1913, as amended... to carry out the intent and purpose of the Act".

In Pennsylvania, the Female Labor Law was enacted on November 1, 1913. It was meant to protect public health and welfare by describing legal working conditions for women. A copy of this booklet can be found in Box 27, Folder 33 of the UE Local Records Subgroup 16-610. 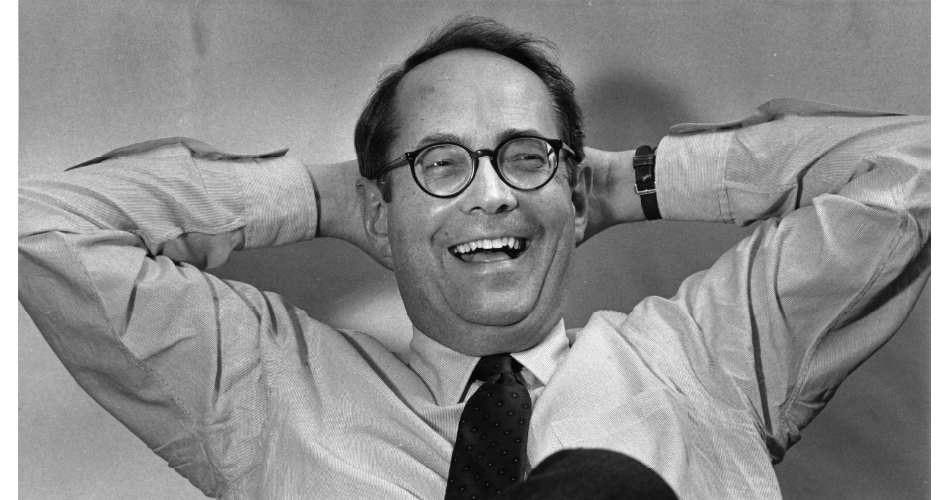 Dick Thornburgh served as the 41st governor of Pennsylvania from 1979 to 1987. While he was governor of Pennsylvania, he generally aimed for equal opportunities for both sexes and less discrimination within the work place. In all of his speeches, he always included both women and men when addressing any groups of people. Around 1975, the Pennsylvania Commission of Women was established. Under the Pennsylvania Commission of Women Records, 1979-1988, there are listed accomplishments of women under the Thornburgh Administration. Under “Other Gains for Women”, it is listed that “Since 1980 the Commission for Women has assisted in sponsoring: two conferences for women in business; five conferences on working women…”

At the 20th anniversary celebration of the establishment of the Pennsylvania Commission of Women on June 5, 1984, Thornburgh announced new initiatives supporting dislocated women workers. He approved the use of funds towards acts such as the Pennsylvania Job Training Partnership Act. This act provided funds for the dislocated workers training program operated by the City of Pittsburgh Private Industry Council. This program was meant to provide classroom and on-the-job training in entrepreneurial skills for 32 women participants.

Governor Thornburgh was very supportive of equal rights and opportunities for women. Some of his press releases included topics such as the march for "A New Day of Equality". Many of his speeches and press releases are digitized and can be found on the ULS Digital Collections website under Dick Thornburgh Papers. 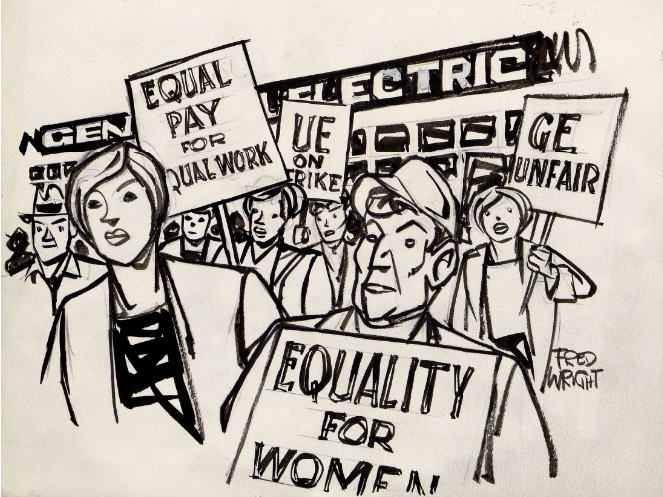 The New American Movement (NAM), established in 1972, was a movement for democratic socialism in the United States. This movement focused on many issues, including health care, social services, gay liberation, and labor. There was a Women's Committee within NAM that specifically focused on women's issues. Because of this, the organization distributed resources that provided guidance for women. Information was provided on legislature that affected women, such as the Family Protection Act of 1981. There were also other resources available for women, such as the NAM Women's Newsletter. Additional resources, such as "Gonna Rise Again! Economic Organizing for Hard Times", suggested outside organizations for working women. Some of these organizations still exist today, such as Women Employed, 9to5, and the Coalition of Labor Union Women.

Although the Pennsylvania Peace Links was founded in 1983 as a chapter of a national organization committed to the prevention of nuclear war, the organization still became involved with some issues of women's leadership and women's rights. Included within the collection is information from 1990 on the Greater Pittsburgh Commission for Women. There was a Women's Leadership Assembly (WLA), comprised of Pittsburgh women leaders. The WLA upheld the mission to "enhance the ability of the women's organizational community to effect meaningful change on behalf of women; to present a unified voice to the community on common concerns; to facilitate cooperation and collaboration among organizations serving women; and to provide a mechanism for information exchange among organizational leaders." Also included within the Pennsylvania Peace Links records were women's rights publications, one of which focused on the Convention on the Elimination of All Forms of Discrimination against Women (CEDAW).

There were very few women workers at the United States Steel Corporation National-Duquesne Works during 1970. However, as the years progressed there was a greater effort to hire women/minorities. Whereas in 1970, there were very few female employees and none held occupations outside of clerical work, Activities Reports from the mid- to late-1970s denoted an increased attention to women and minorities.

As the years progressed, the reports become more detailed. The structure evolved from simply listing out "minorities", presumably to encompass both women and ethnic groups, to listing both "minorities" and "females". This grouping leaves the question as to whether black women were included within "minorities" or "females". It is unclear as to whether women of minority backgrounds were classified simply as women or as minorities as well. However, with the introduction of newer legislature/organizations stressing equal opportunities and employment for minorities within the work place, the need to report upon the characteristics of workers became more prevalent.

Activity Reports from 1972 noted small numbers of minority hires. During the period of January 3-7, 1972, only 8 out of 743 employees for both National and Duquesne Works were minorities. The total number of employees for both National and Duquesne drastically increased to 7,612 by December 17-28, 1973, about 650 of which were minorities. During the mid- to late-1970s, the Activity Reports became more detailed. In addition to the "minority" category, a category for "females" was also added.