Published independently and anonymously from 1968-71, pornography review journal Artisex provides insight into the masculine-dominated world of ‘underground’ cinema. The stated purpose of the journal was to prevent pornography spectators from getting “rooked at the box office” (Artisex Volume II Number 1, 1969) by paying to see subpar, non-sexy films. Cultural stigma surrounding pornography necessitated Artisex, as no other media platforms discussed the adult cinema scene. Relatively little is known regarding publication and circulation of Artisex, but from reading the journal it can be ascertained that contracted scouts in cities across America wrote in with reviews on the content and quality of adult films in circulation.

Each issue includes five to ten brief reviews of pornographic films in circulation, as well as a digest chart assigning each film a numerical value. Films are ranked on a scale of one-hundred points based on six criteria: technical, direction, plot, looks, sexiness, and nudity. Generally, three types of films were reviewed: stag films, sexploitation films, and art/commercial films. Stag films were shot on 16 mm film without any sound and were generally around ten minutes in length. Often these films consisted of only one shot, and a camera would simply capture the sex acts appearing. While very explicit, stag films lacked any narrative, and thus were not particularly engaging. Additionally, obscenity laws of the time forbid any art whose sole purpose was stoking arousal from appearing in commercial settings. As stag films lacked any ostensive narrative or artistic meaning, they were rarely accessible in public settings.

Sexploitation films were feature length and narrative, and were thus shown more commercially than stag films. However, this commerciality led to sacrifices in terms of explicit sex. The most explicit sexploitation films showed simulated sex, which felt tame compared to what was shown in stag films. Finally, Artisex reviewed a number of commercially released Hollywood films and European art films which were thought to feature some explicit content. While the reviewers noted the higher production quality of these films, they often felt disappointed in the amount of explicit content portrayed. Genre was of no interest to the writers of Artisex; explicit sex was explicit sex, whether it was depicted in an art film of Ingmar Bergman or in a ‘nudie cutie’ of Russ Meyer.

Publication of Artisex was suspended in 1971, when the authors felt that “tasteful, artistic, realistic, and explicit sequences of intimate sex [were] relevantly woven into scenarios that compete favorably with major studio products” (Artisex Volume IV Number 4, 1971). Over the next two years, the release of three films would fully reshape pornographic production, consumption, and spectatorship, and are today considered to have ushered in the ‘golden age’ of pornography: The Devil in Miss Jones (Gerard Damiano 1973) and Deep Throat (Gerard Damiano 1972), Behind the Green Door (Jim and Artie Mitchell 1972). By the mid-1980s, pornography consumption was returned to the private sector, as home viewing options became readily accessible. Thus, a close reading of Artisex provides insight into a brief period where pornography was both highly censored and casually discussed in public. 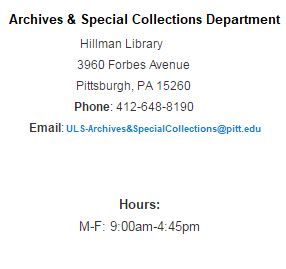 These periodicals are all currently housed within the Archives & Special Collections Department in Hillman Library.  The Special Collections Department is the general designation for rare books, general manuscripts, and special collections which belong to the University of Pittsburgh. Established in 1966, the collections consists of over 52,000 physical volumes, 560 linear feet of manuscripts and archives, 13,000 photographs, 500,000 theatre programs, and various slides, microfilms, posters, recordings, ephemera, and memorabilia.