There may be some instances where you want to alter the caption sequence numbers, such as when you want to create sequences such as Figure 2a and Figure 2b for closely related figures. To alter a caption, you need to: 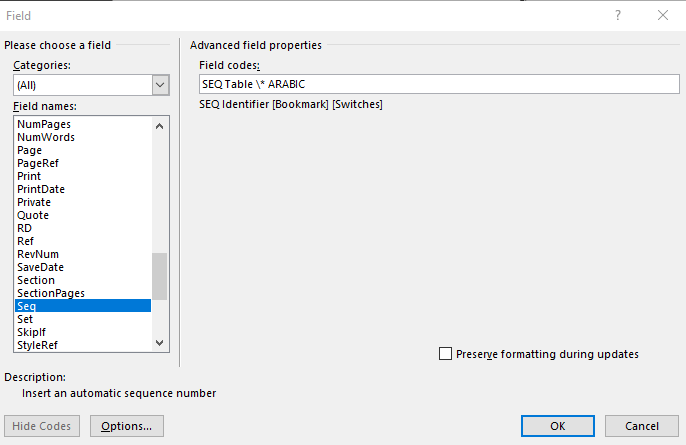 It's important to note that due to how the Appendix headings are created, you can't easily use the \s command to reset to Appendix A. For those instances, you will need to use the \r command for each caption that requires this reset.

When adding captions, it's important to understand that there are parts of the caption and caption label that you can and can't edit. When you use the Insert Caption function, a sequential label number is inserted. You can identify that by highlighting the number in the caption and noticing that it will be shaded slightly darker than the rest of the highlight. This is the portion of the caption that must remain unedited. If you add any captions, with the same label, before or after this inserted caption; Word will adjust the numbering to stay within sequence. However, you may need to right-click (Ctrl+click on a Mac) to update that field, much like you do for the Table of Contents and List of Figures/Tables.

You are able to add text before or after this caption number and it will be shown in the List of Figures/Tables, when they are updated. You must remember to be consistent in how you are adding repeated characters. An example of this is most commonly found in the Appendices, as you can add such customizations as Figure 1 to become Appendix Figure 1 or Figure A1. (The bold characters are added after the caption insertion.)

Using Chapter Numbers in the Captions

It's possible to use the Heading 1 chapter numbers as part of the caption numbering. To do so:

It should be noted that you won't be able to use this method for Appendix captions, as the Appendix style is not considered a heading by Word. Please use one of the above methods for creating custom caption labels.