Travelers Along the Silk Roads, 10th Century to the Present @ Pitt: Musical Encounters in Central Asia

Musical Encounters in the Deserts and Mountains of Central Asia 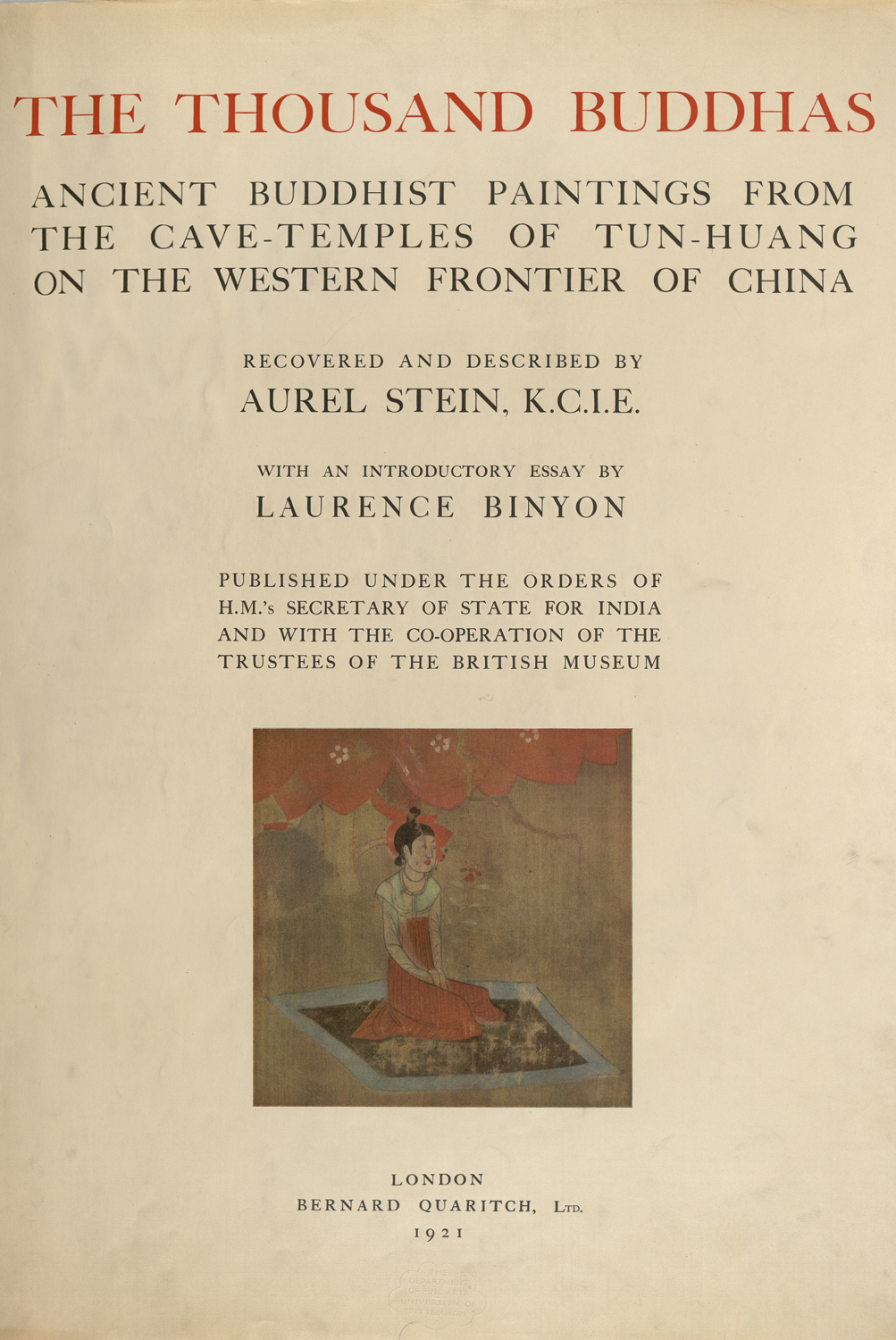 "The purpose of this publication is to place before students interested in Eastern art reproductions of select specimens from among the great collection of ancient Buddhist paintings which in the course of the explorations of my second Central-Asian journey, carried out in 1906--8 under the orders of the Government of India, I had the good fortune to recover from a walled-up chapel at the ‘Caves of the Thousand Buddhas’ near Tun-huang.  Those who may wish for details of the circumstances attending it, and for some account of the local conditions which explain the preservation of these relics of ancient Buddhist art in the distant region where the westernmost Marches of true China adjoin the great deserts of innermost Asia, will find them in my personal narrative of that expedition."

…These two large pieces of silk with curved tops once belonged respectively to the right and left sides of one arch-shaped picture.  The centre portion, which is likely to have contained a seated Buddha, is lost.  But some idea of the size of the whole may be formed from the fact that the surviving right side portion in its broken state still measures six and a half feet in height with a width of about three and a half feet, while the dimensions of the badly broken left side are even larger.  The shape of the picture suggests that it was originally intended to occupy the back of a vaulted chapel recess or of the aisle of an antechapel." 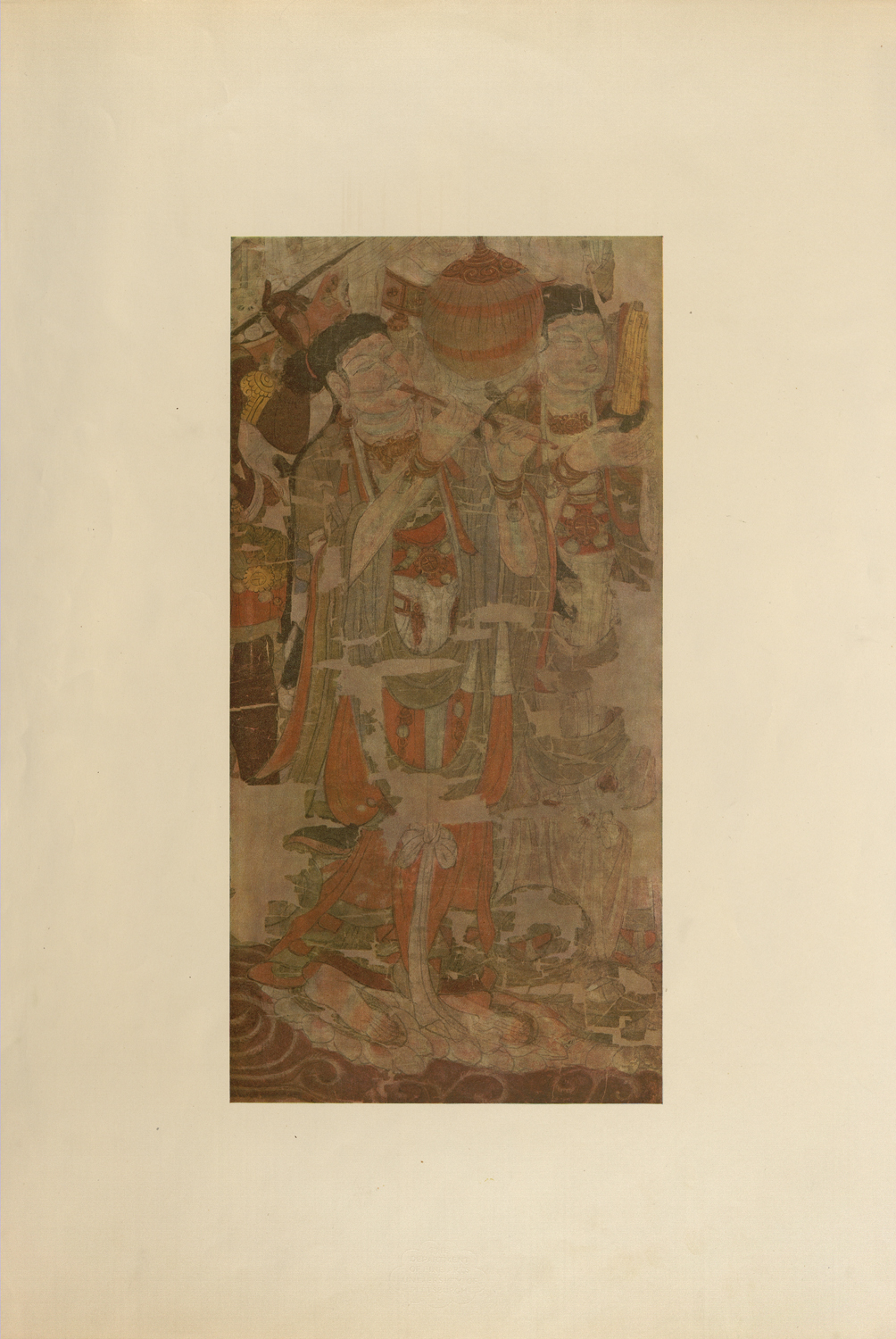 "Of the figures of the musicians walking in front but little is preserved on the right side of the picture.  But the corresponding pair on the left side, which Plate V reproduces on a scale of approximately one-half of the original, has suffered less damage and allows us to enjoy both the spirited design and the great delicacy of drawing in these figures.  They march with uplifted heads, playing on whistle-pipe and mouth-organ.  In the face of the flute-player on the left delighted absorption in the music is admirably expressed, while the curving lines of the body and the floating loose garments convey a sense of rhythmic motion in complete harmony with the subject.  Equally expressive is the drawing in the face of the musician to the right, with its look of intent concentration.  The larger scale of reproduction allows us to see here the method of shading used by the painter in the treatment of the flesh.  The delicate colouring of the faces is well set off by the stronger but harmoniously blended tints of the large globe-shaped tassel which appears between them, hanging from the harness of Samantabhadra’s elephant.  In the same way the strong black of their hair and the dark brown of the Mahout’s figure, partially seen on the left edge of Plate V, help to give strength to the colour scheme, in which light greens and reds prevail." 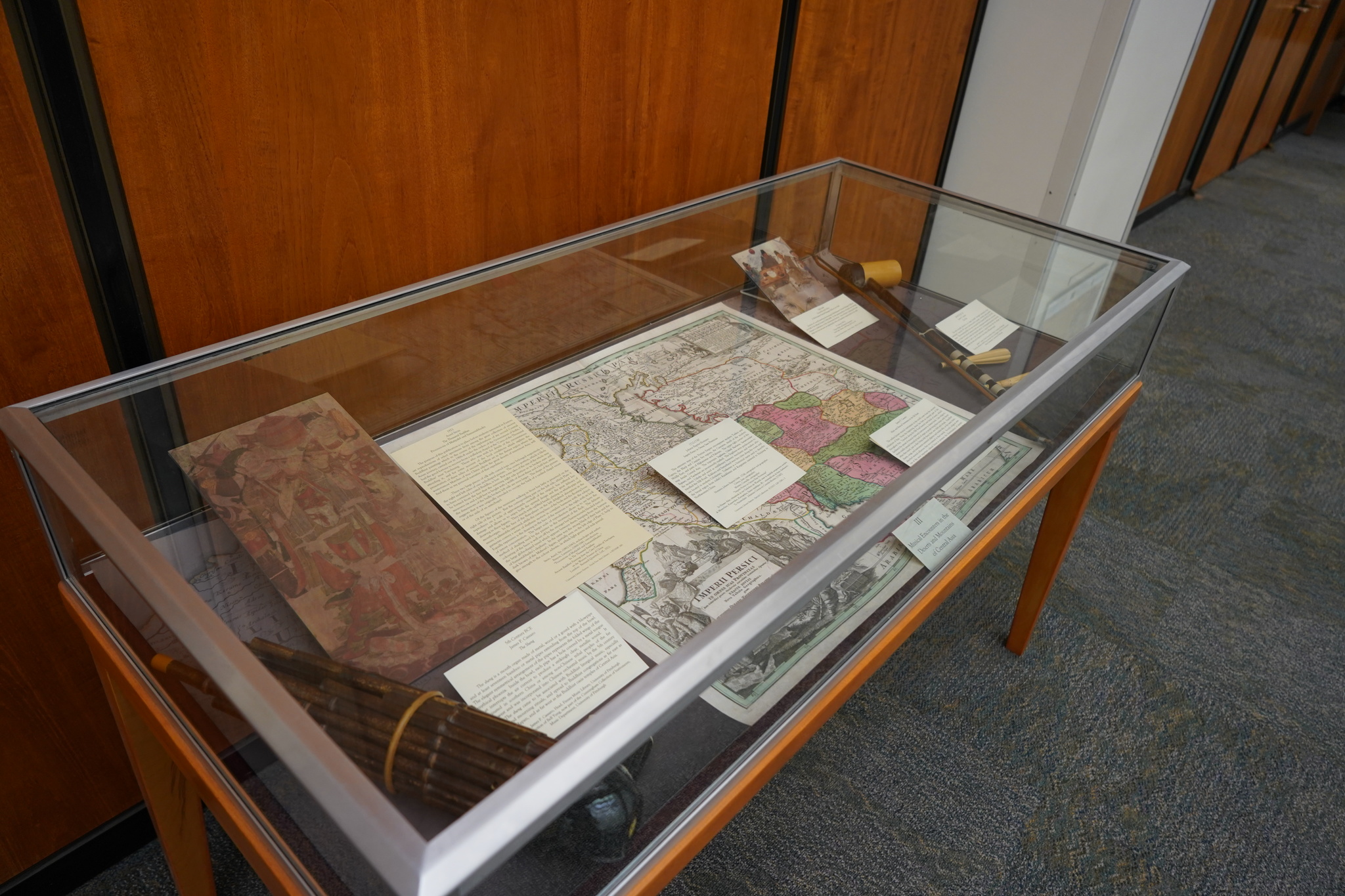 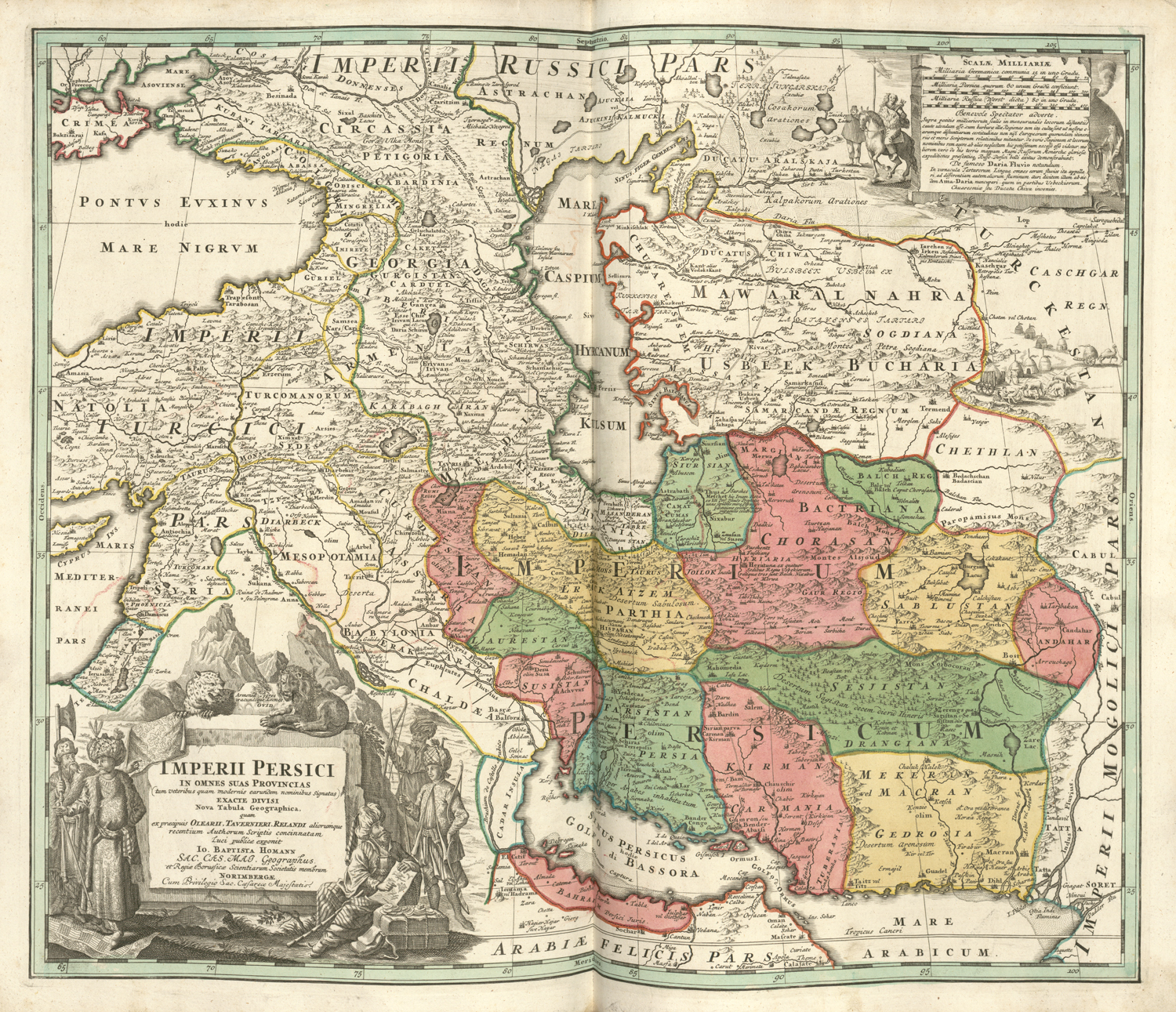 This extensive map of the Persian Empire encompasses modern Turkey and Cyprus, the Black and Caspian Sea regions, the Caucasus, much of the modern Middle East, and parts of Afghanistan and Pakistan.  The upper right corner of the map details Central Asia.  The toponyms Sogdiana, Usbeek Bucharia, Samarcandae Regnum, and Turckestan are prominently marked.  The Sogdians were predecessors to the modern Uzbeks and acted as middlemen between merchants and traders who travelled the Silk Road.  Bukhara and Samarkand were key cities along the route and are located in modern Uzbekistan.  Turkestan is a historical name used to describe the broad region from today’s Kazakhstan and Kyrgyzstan eastward to Xinjiang in Northwestern China. 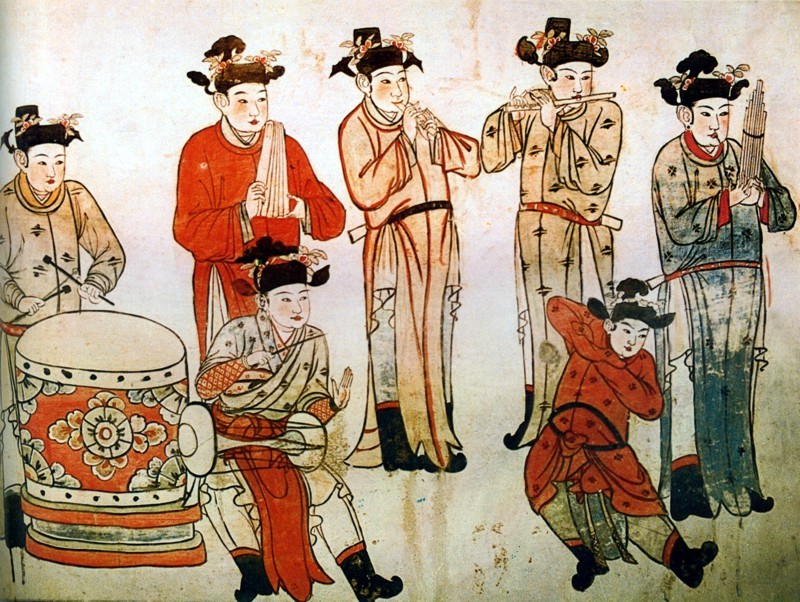 A group of musicians and a woman dancing. Mural in the tomb of Zhang Kuangzheng, Xuanhua, Hebei, Liao Dynasty (1093–1117), courtesy of AKG Images.

The earliest known musical instruments in the world come from the ancient civilizations  of  Asia.  From  the  beginning,  music  has  been  an  essential  part  of  life throughout Asia. Travelers along the Silk Road learned new kinds of music, which facilitated the spread of musical styles and instruments to distant lands. Like religion, music readily spreads beyond its land of origin as people bring their music with them when they travel, just as they bring with them their own faith and rituals. Familiar chants, songs, and instruments sustained pilgrims and traders who, at the same time, absorbed musical influences they encountered in their travels. As such, religion was one  of  the  most  important  cultural  forces  to  promote  the  dissemination  of  music along  the  Silk Road. The  arduous  journey  across  unfamiliar  terrain  meant  that pilgrims and traders had to employ highly flexible instruments, which lent themselves to many kinds of music, besides that of the culture of their origin. This flexibility can be readily seen in the global spread of string and wind instruments. In particular, the sheng, a free-reed mouth organ, the erhu, a two-stringed instrument, and the zheng, a table-top zither,were the most familiar and most-played along the Silk Road.

Instruments of the Silk Road in Practice 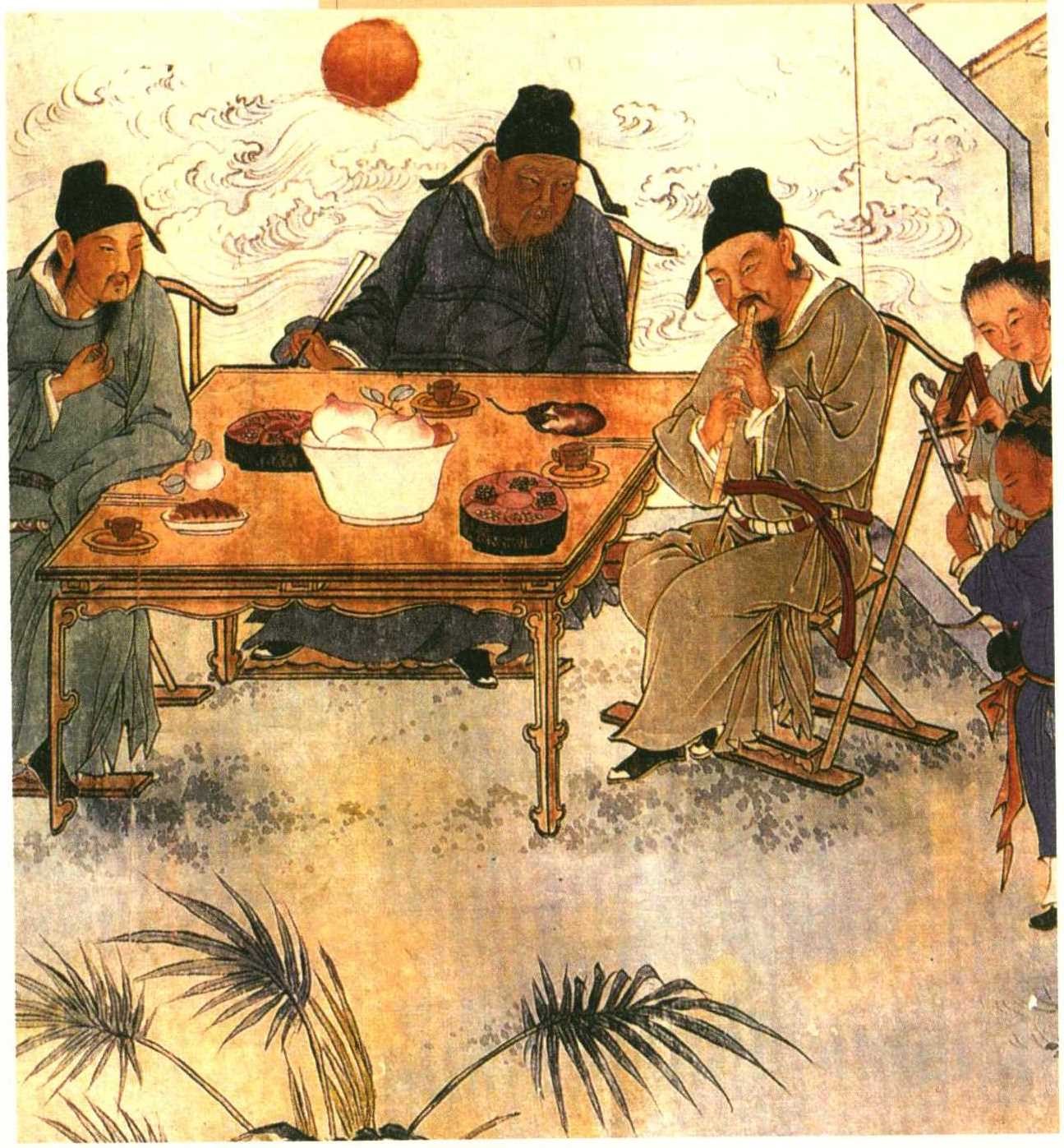 Section of a scroll painting showcasing A Mid-Autumn Festival Banquet Held at Lin Hall of the Ming Dynasty (1368-1644).  In the painting three scholars are having a dinner in celebration of the mid-autumn festival.  One scholar is playing the xiao while two boy servants are playing the erhu and kuaiban respectively by his side. 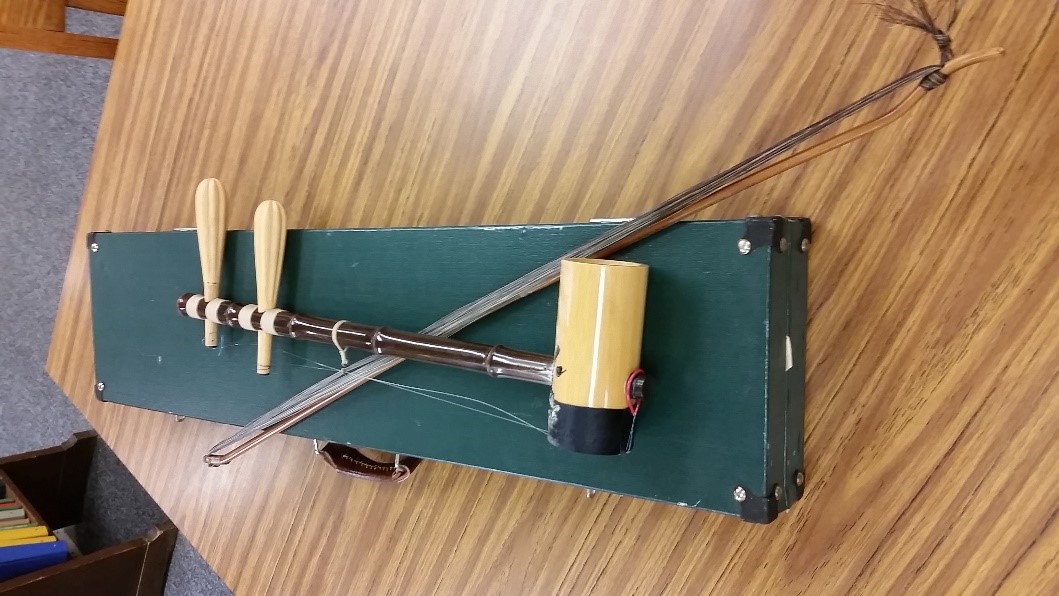 A photograph of the erhu.  From the collection of Bell Yung, now part of the Cunningham Collection of Instruments, Music Dept., University of Pittsburgh

The erhu, formally referred to as a huqin, literally “stringed instrument of the barbarians,” since the 14th century, has been used in operatic, narrative, and ensemble music.  This two-string fiddle, first seen during the Han Dynasty (206 BCE–220 AD), has a long round neck of hardwood, with two tuning pegs mounted into a resonator, which is covered in snake skin (typically python).  Its distinguishing feature is that the horsehair bow used to play the instrument is placed between the two strings.  In ensemble, the erhu can be likened to the violin in Western music. 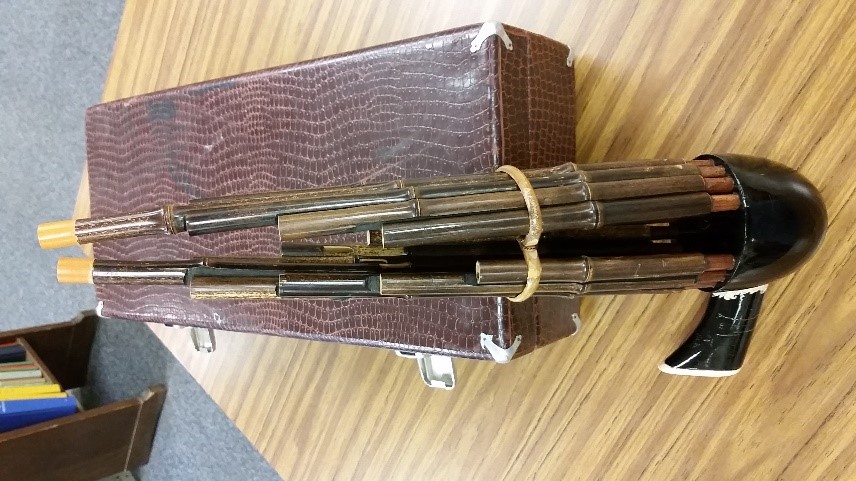 A photograph of the sheng.  From the collection of Bell Yung, now part of the Cunningham Collection of Instruments, Music Dept., University of Pittsburgh.

The sheng is a mouth organ made of metal, wood or a gourd with a blowpipe and at least seventeen bamboo or metal pipes extending from the top of the bowl.  The elegant symmetrical arrangement of the pipes represents the folded wings of the mythical phoenix.  Inside the bowl, each pipe has a hole covered by a metal tongue that interrupts the air current to produce a strikingly clear, metallic sound.  It originated in southern China or among non-Chinese tribal peoples of the far southwest and was incorporated into Chinese orchestral music by the 5th century BCE.  The sheng came to be associated with Buddhist liturgical music, especially funeral and mourning rituals, and spread to Buddhist congregations as far east as Korea and Japan, and as far west as the Buddhist oasis temples of Central Asia.