Travelers Along the Silk Roads 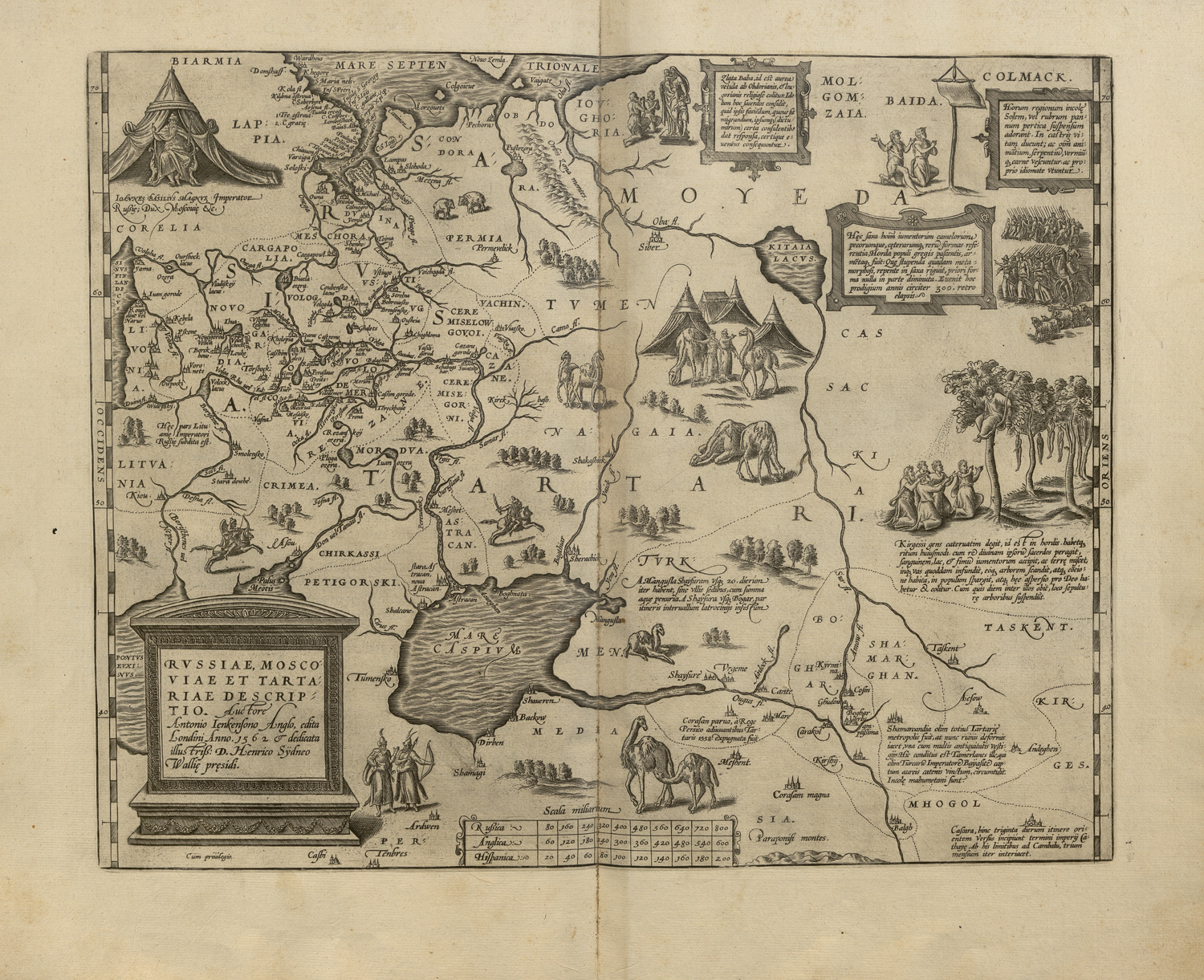 Abraham Ortelius, the 16th century cartographer and geographer, printed the copper-engraved map Russiae, Moscoviae et Tartariae Descriptio in 1562, and first published it in his atlas Theatrum Orbis Terrarum, or Theatre of the World in 1570.  Ortelius based Russiae, Moscoviae et Tartariae Descriptio on a map created by the English merchant and adventurer Anthony Jenkinson.  In the lower right corner of the Ortelius map appears “Shamarghan,” the way Samarkand, in today’s Uzbekistan, was then spelled.  It is one of the oldest inhabited cities of Central Asia.  Samarkand occupied an important place in the overland route of the Silk Road both because of its central location and because its inhabitants, the Sogdians, played a critical role as middlemen between merchants and traders from the East and West. 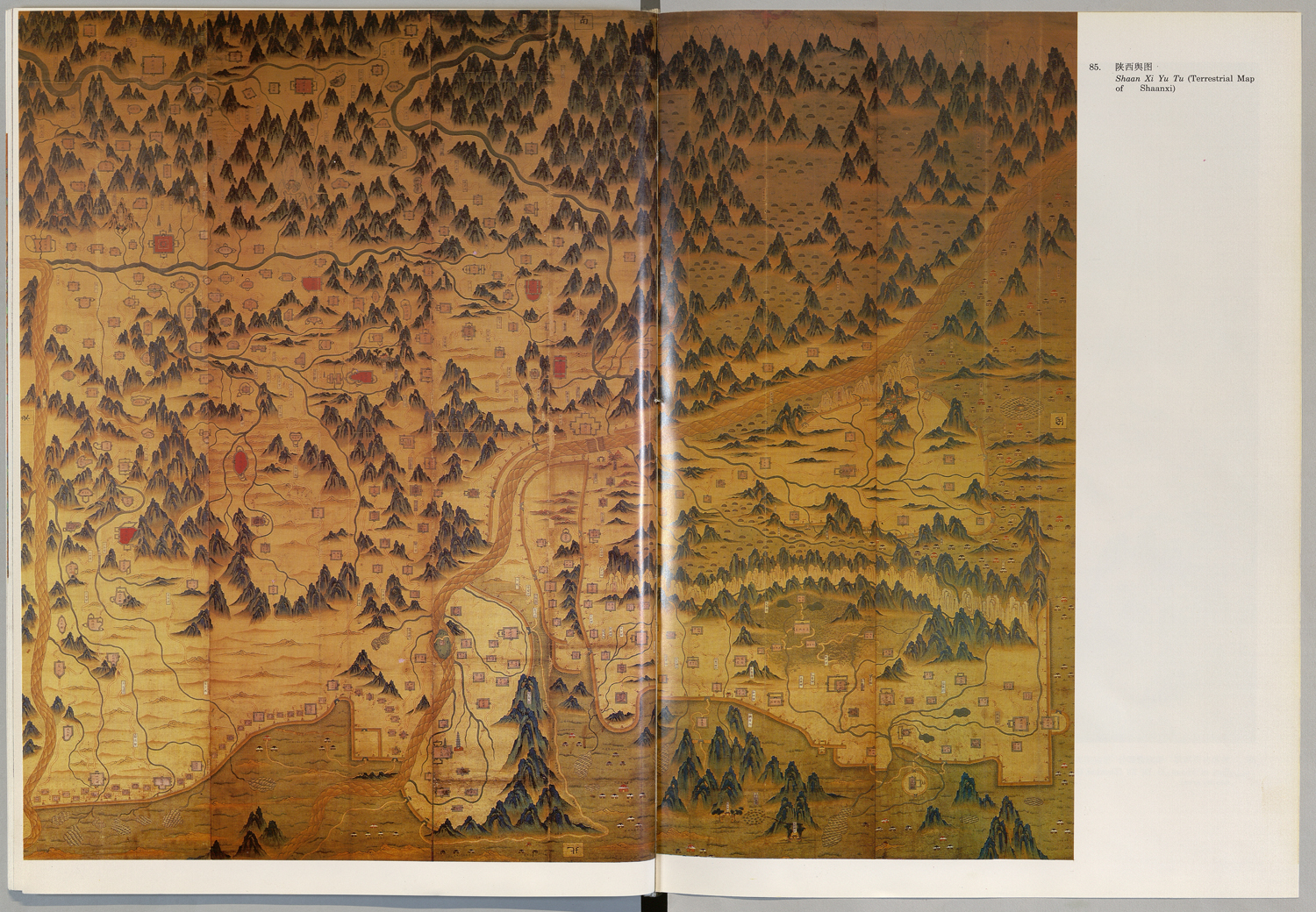 "Shann Xi Yu Tu" in An Atlas of Ancient Maps in China. Volume One: The Ming Dynasty, 1990.

Historians consider the Chinese city of Xian the eastern terminus of the overland route of the Silk Road.  This color map of the Xian area is made of stiff silk.  It commemorates imperial accomplishments of the region during the Ming Dynasty’s Wanli period.  The Shann Xi Yu Tu was completed sometime during the Taichang and Tianqi reigns (1620-1627).  The top, bottom, left, and right sides respectively show south, north, east, and west.  In the east, the Huanghe River is shown, extending west to Jiayuguan, south to the Hanjiang River, and north to the Great Wall.  The map shows mountains, rivers, roads, forts, strategic posts, historic sites, and pastures.  The Shann Xi Yu Tu includes more than 560 explanatory notes for place names and also indicates distances between places.  It is one of the few surviving provincial maps from the period of the Ming Dynasty (1368-1644).  The original is currently held at the National Library of China in Beijing. 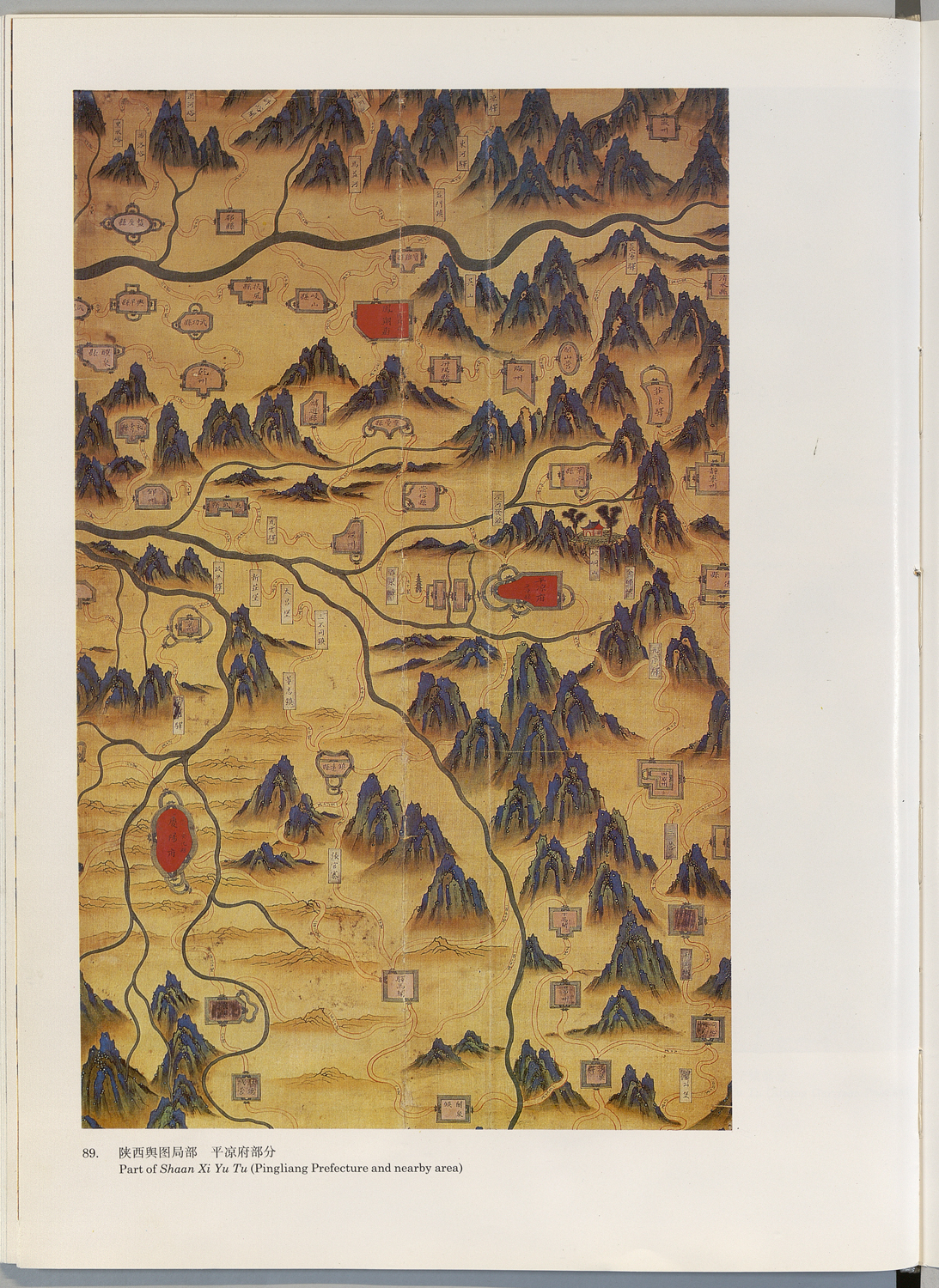 "Part of Shann Xi Yu Tu (Pingliang Prefecture and nearby area,)" in An Atlas of Ancient Maps in China.Volume One: The Ming Dynasty, 1990. 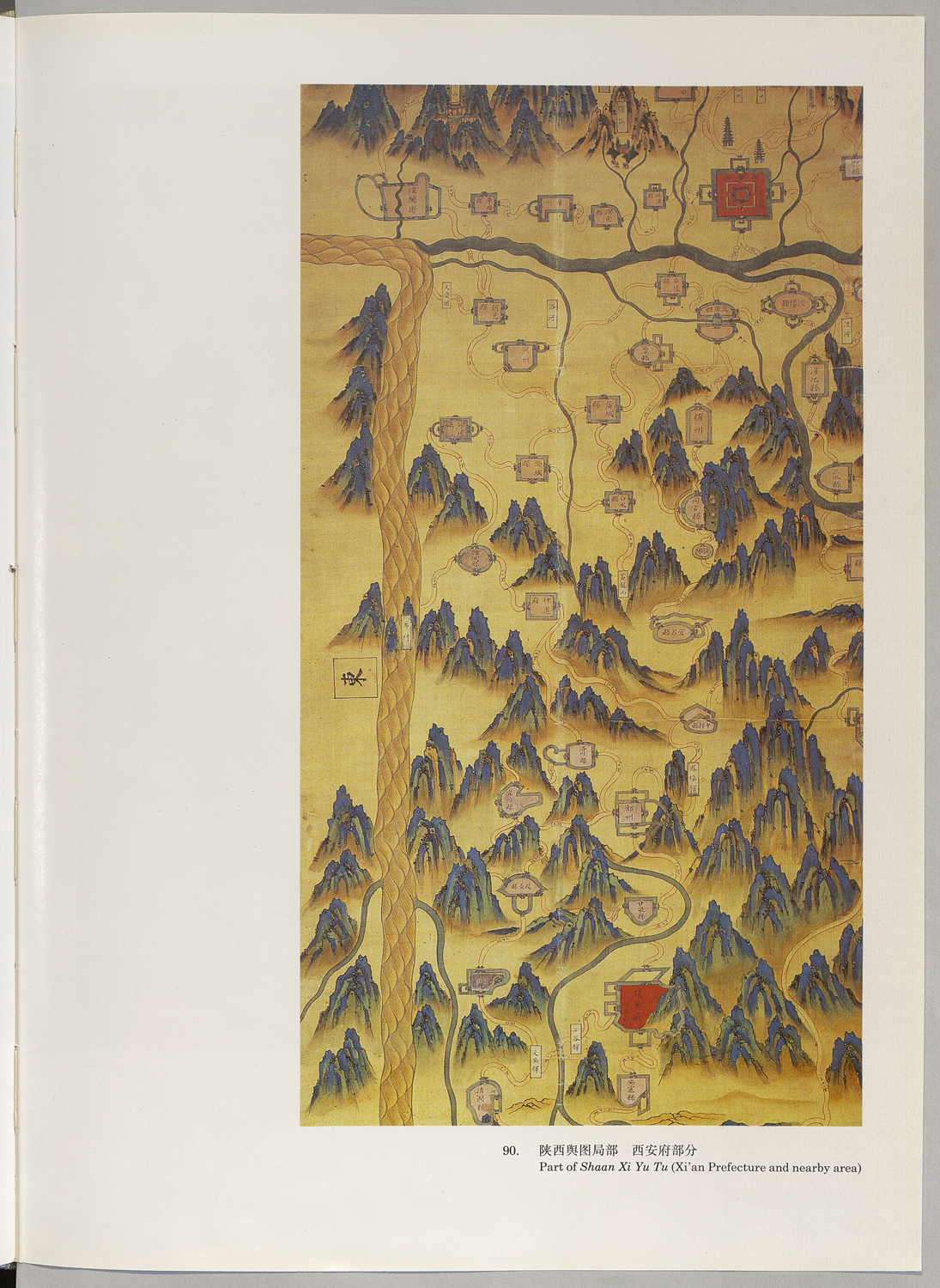 "Part of Shann Xi Yu Tu (Xi'an Prefecture and nearby area,)" in An Atlas of Ancient Maps in China.Volume One: The Ming Dynasty, 1990. 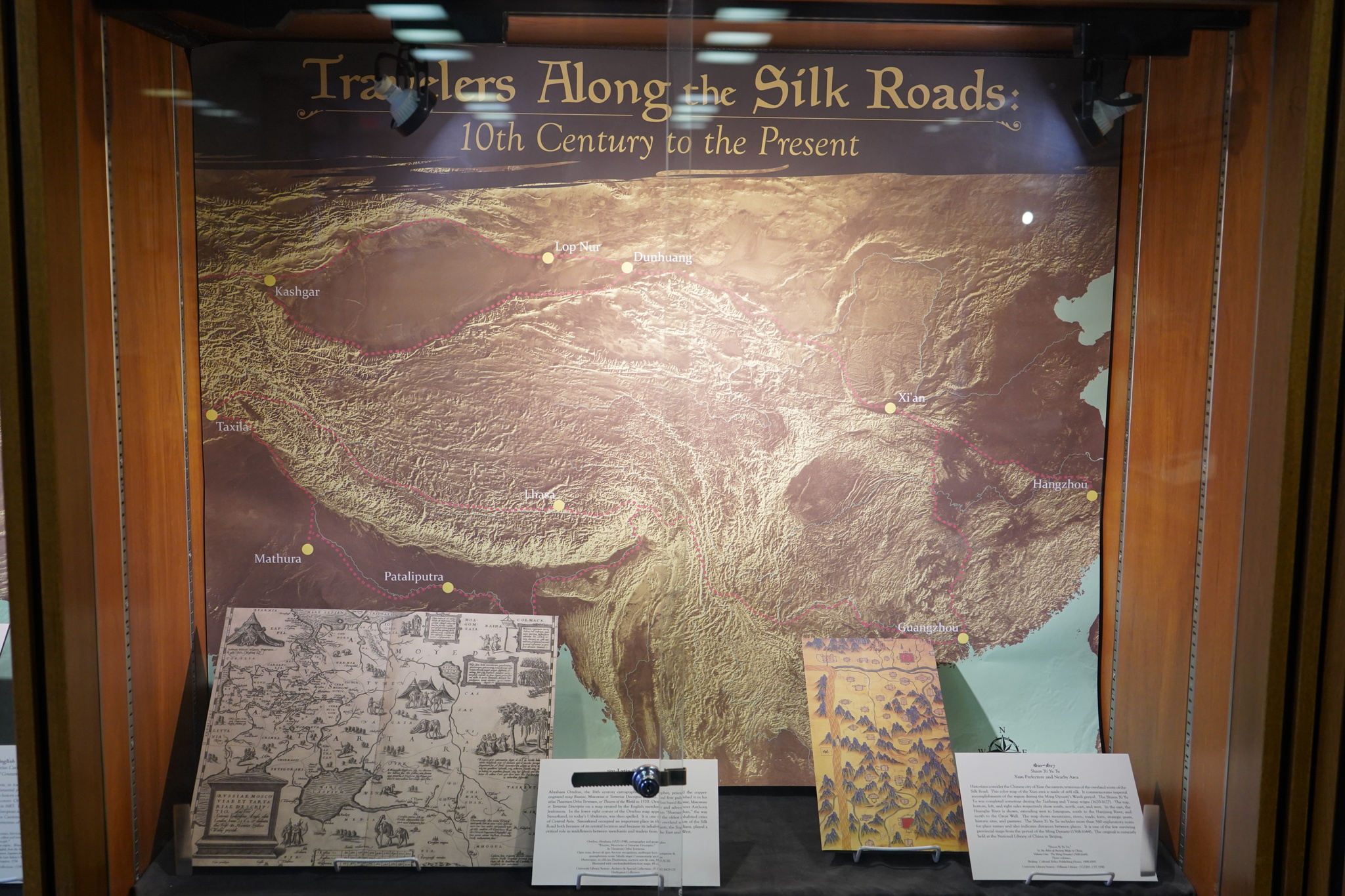 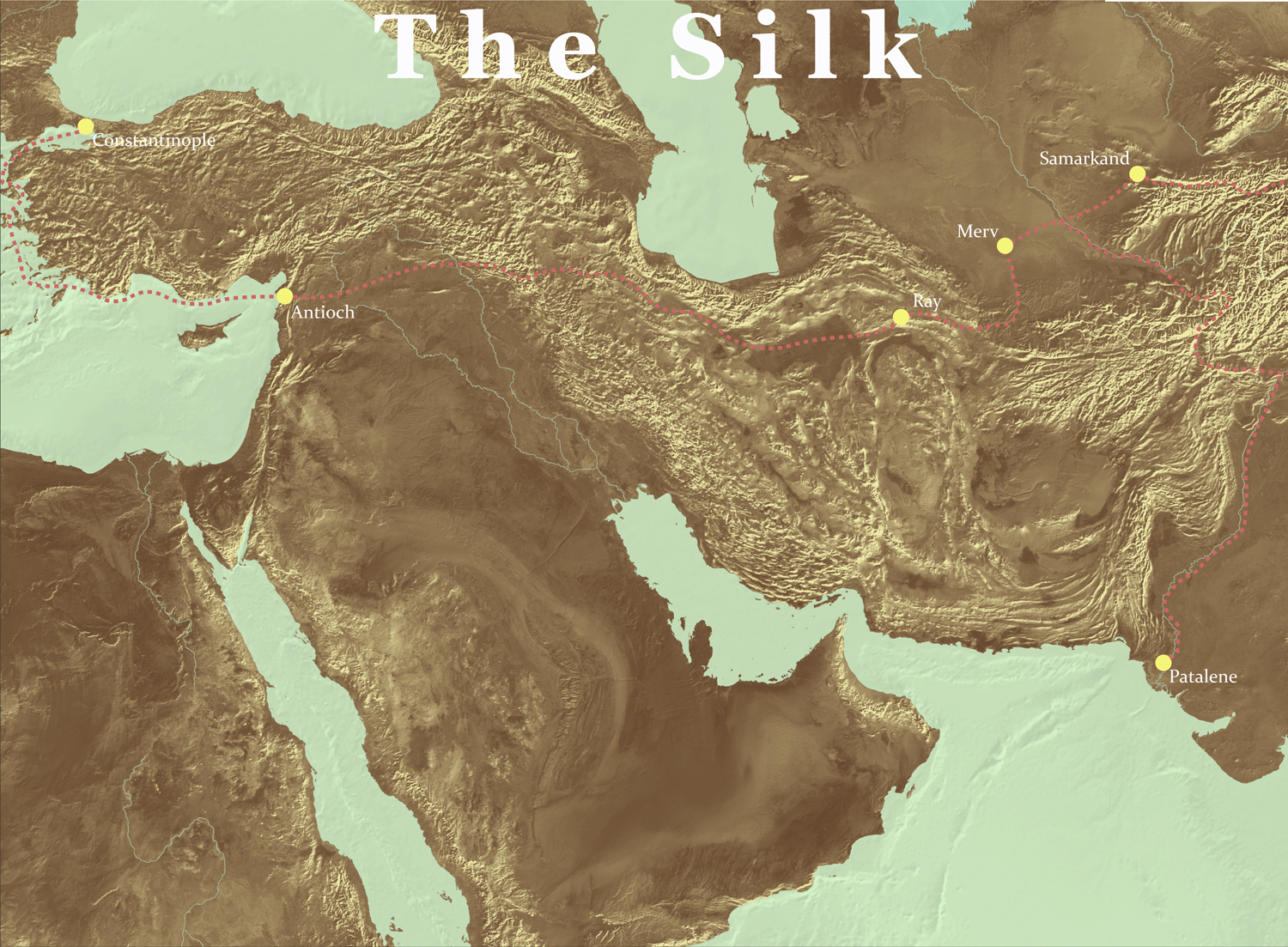 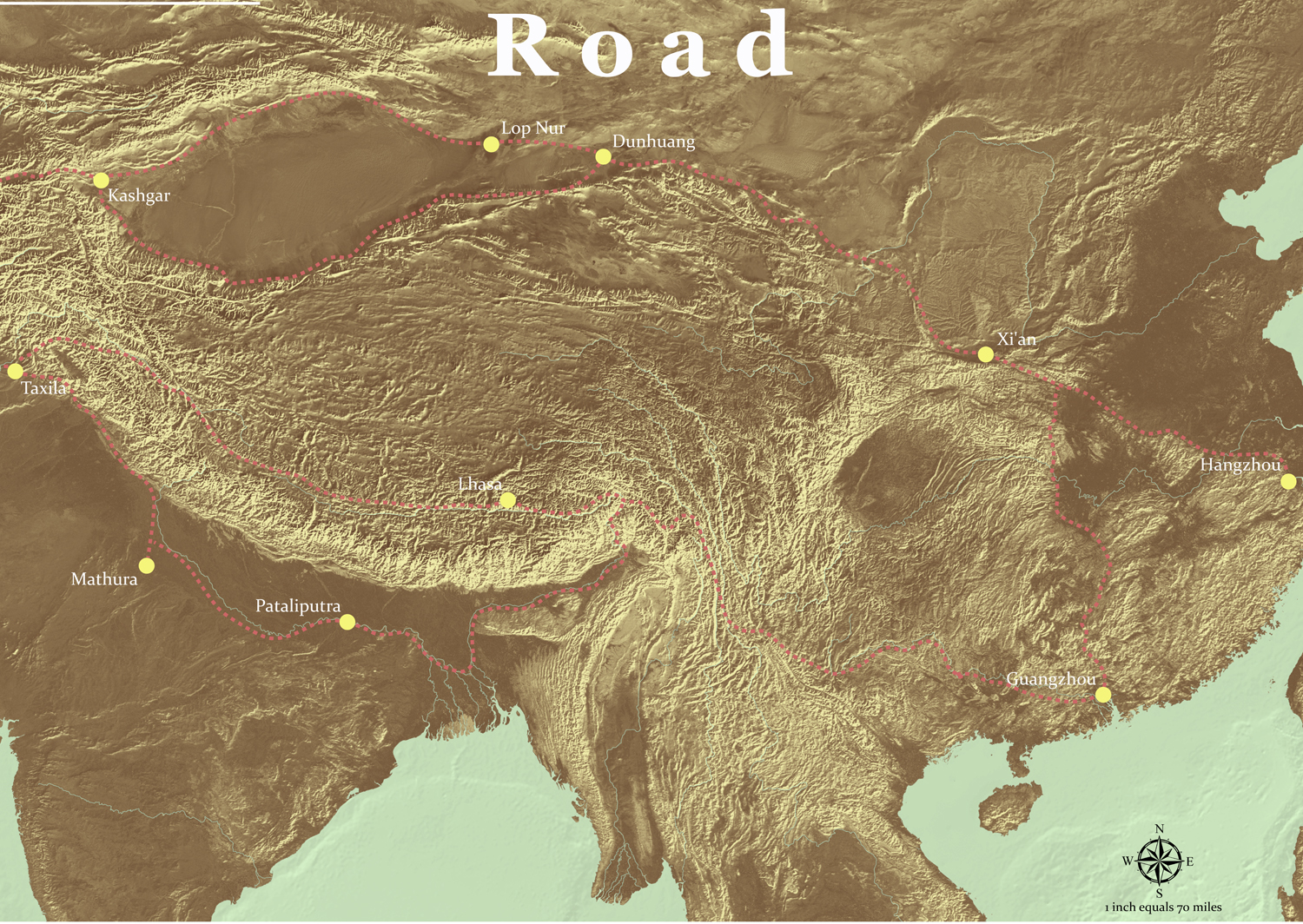 The term Silk Road, coined by 19th century German explorer Ferdinand von Richthofen, refers to a loose network of overland trade routes stretching from the Mediterranean to East Asia. Textiles, gems, spices, animals and even religions were all exchanged along this vast expanse, starting around 1,000 B.C. and continuing for millennia.

For much of this time, most Silk Road traders coming from western Eurasia were Muslim, and they brought their beliefs and rich culture to millions of people.

A Crossroad of Ideas 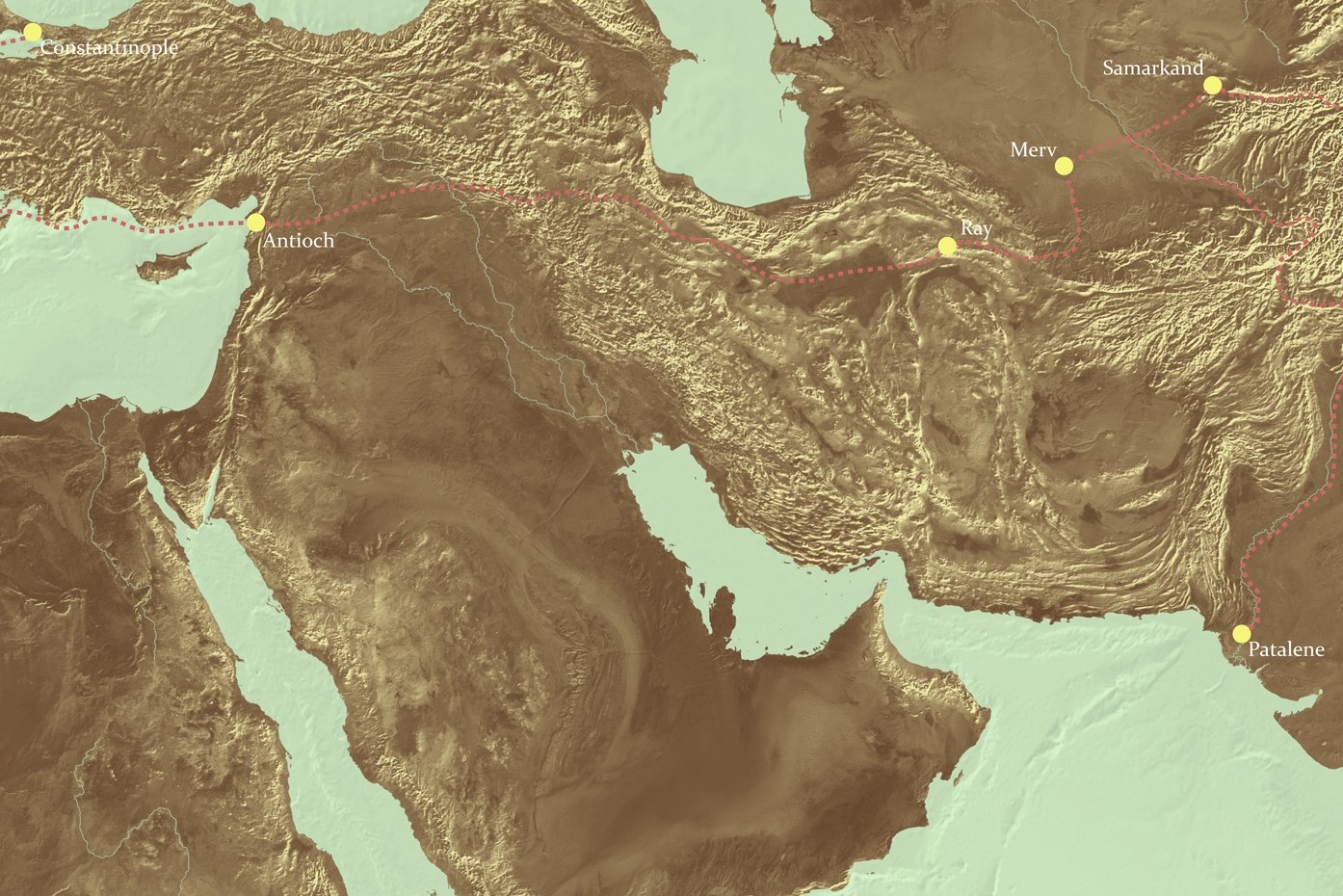 While the Silk Road was a two-way route, most of its movement was eastward, carrying Buddhism, Zoroastrianism, Judaism, and later, Islam.

By the 8th century, Muslims stopped thinking of religion geographically and began seeking converts along the Silk Road. The benefits of conversion to such a widespread religion were many, as Muslims preferred trading with other Muslims.

Cultural Exchange Along the Route 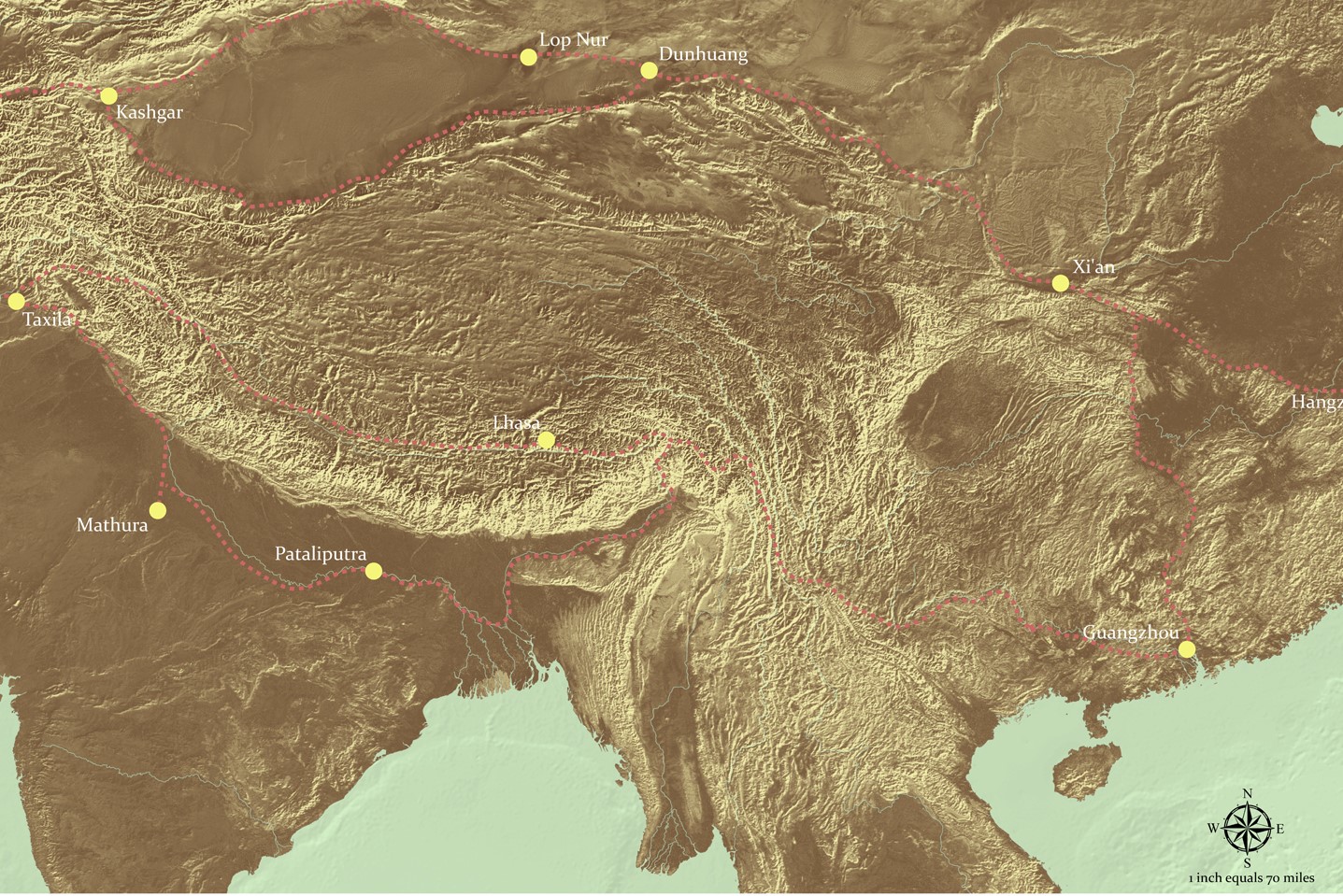 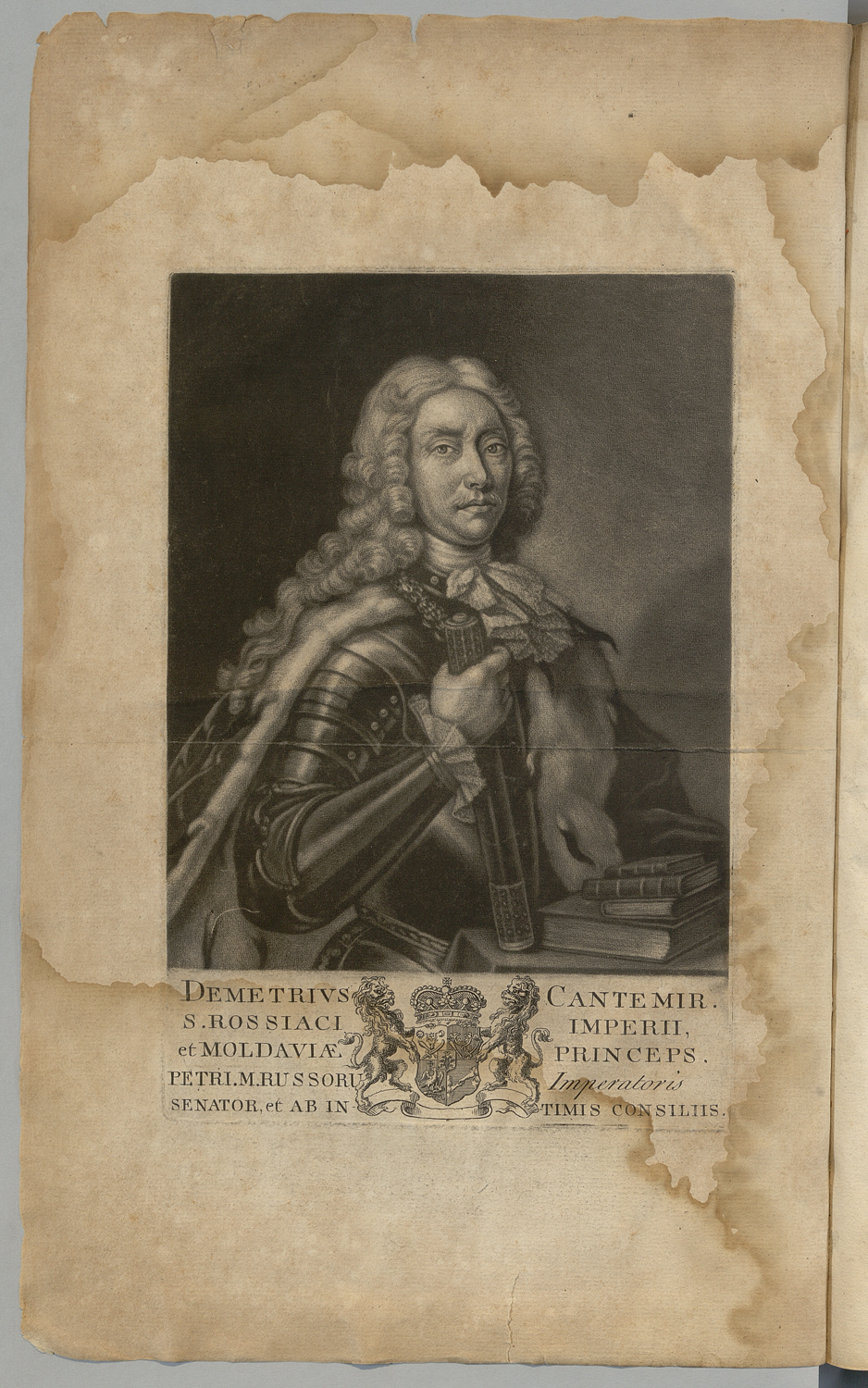 Demetrius Cantemir was Prince of Moldavia, in today’s Romania, and was a statesman, historian, and polymath who lived for a substantial period in Constantinople.

The History of the Growth and Decay of the Othman Empire, Demetrius Cantemir, 1734.

Originally written in Latin, the English translation of his history of the Ottoman Empire was published in English in London in 1734. The work covers Ottoman history from Othman, the Founder of the Empire, to the Siege of Vienna in 1683. 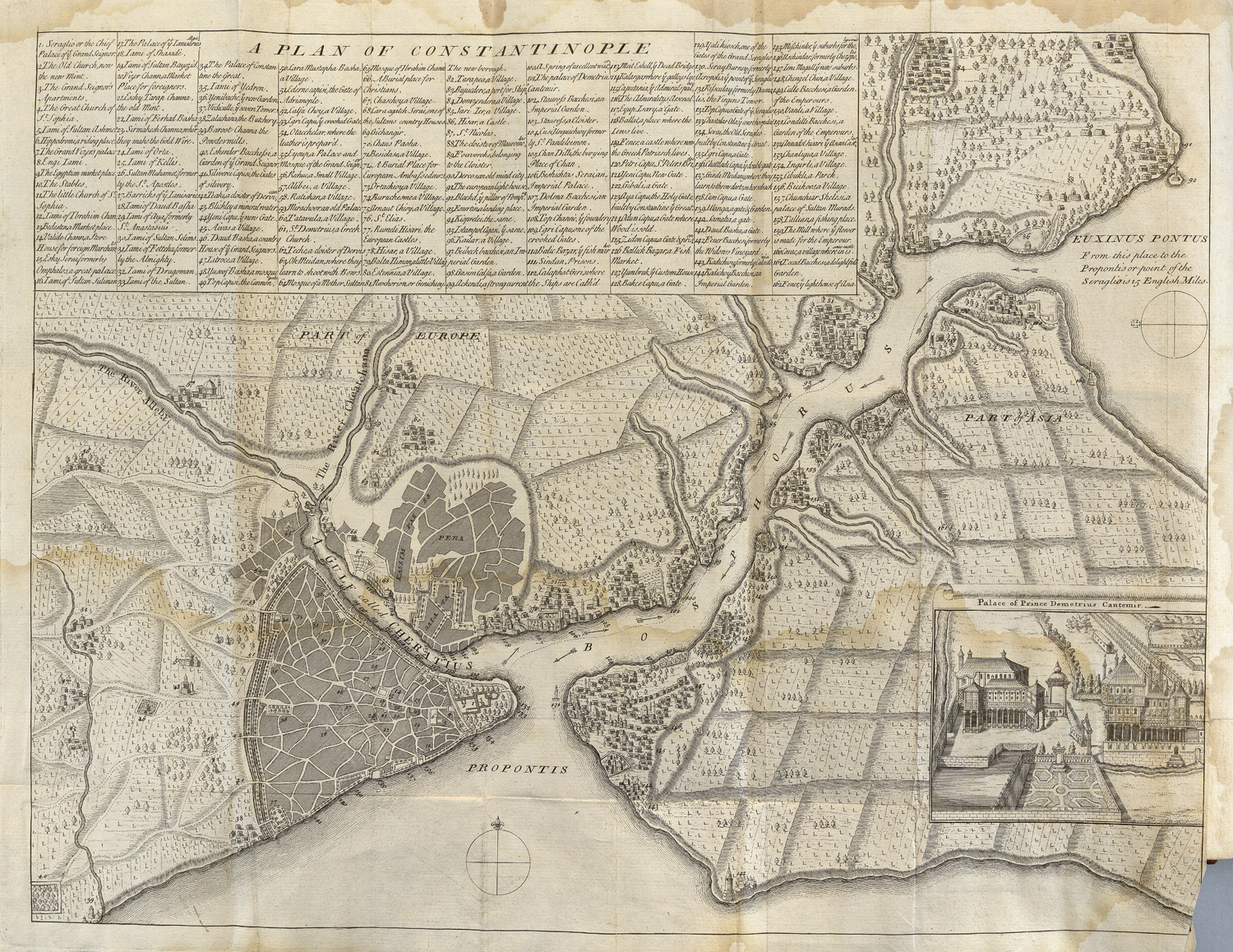 "A Plan of Constantinople" from The History of the Growth and Decay of the Othman Empire, Demetrius Cantemir, 1734.

This engraved topographical map of Constantinople shows 162 places on both the European and Asian sides of the imperial city.  In the lower right is an inset engraving of Prince Cantemir’s palace in the city.  Historians generally regard Constantinople as the Western terminus of the overland Silk Road.​

Cantemir, Demetrius, (1623-1723), statesman, historian, and writer.  Tindal, N. (Nicholas), (1687-1774), editor and translator. The History of the Growth and Decay of the Othman empire ... Written Originally in Latin, by Demetrius Cantemir, Late Prince of Moldavia. Tr. into English, from the Author’s Own Manuscript, by N. Tindal ... Adorn’d with the Heads of the Turkish Emperors, Ingraven from Copies Taken from Originals in the Grand Seignor’s Palace, by the Late Sultan’s Painter.  London:  James, John, and Paul Knapton, 1734.  University Library System - Archives & Special Collections - f DR439 D528D528﻿