Travelers Along the Silk Roads, 10th Century to the Present @ Pitt: Alexander the Great, Kublai Khan, and Marco Polo

Alexander the Great, Kublai Khan, and Marco Polo: Confluences of Power and Exchange in “Assia” 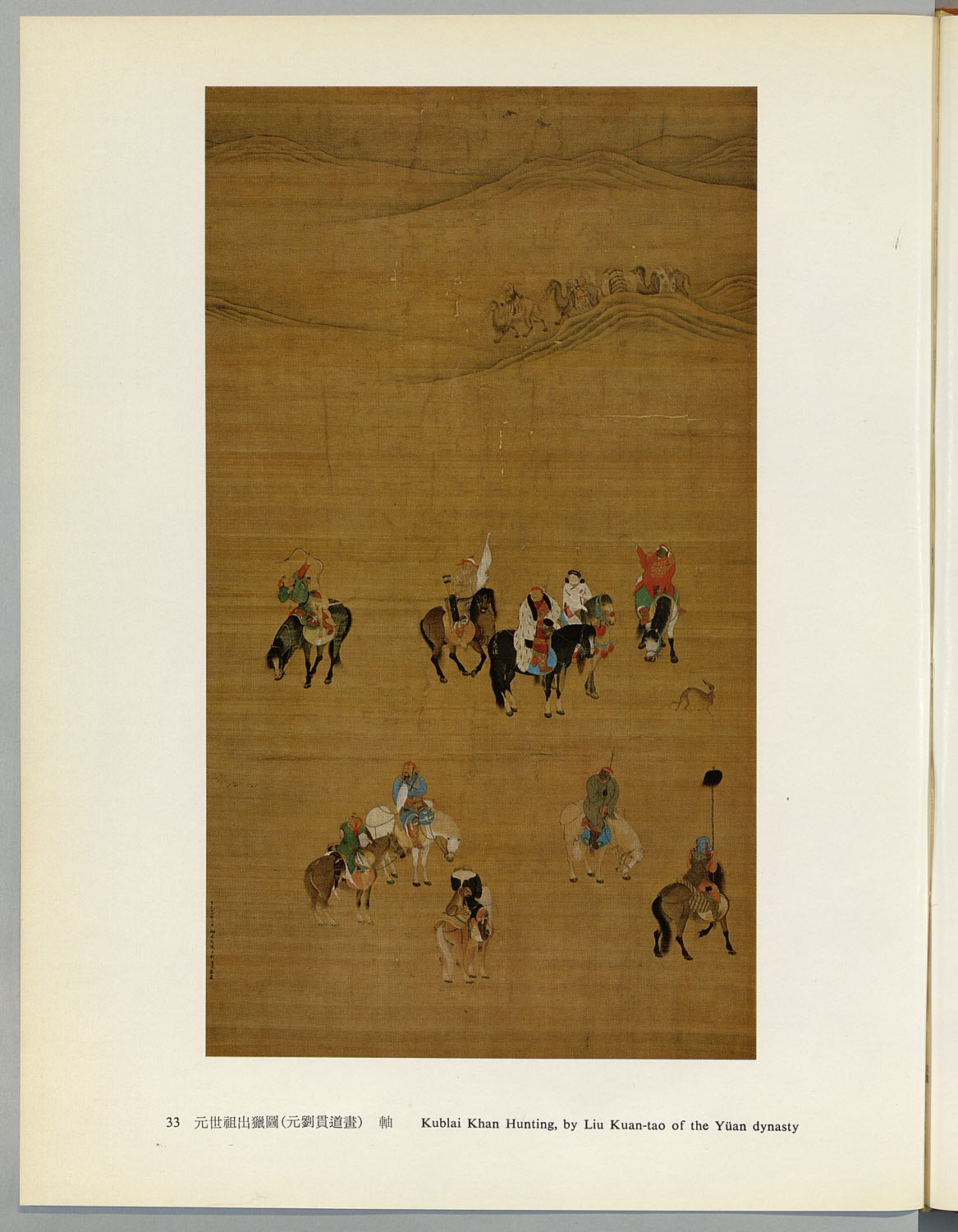 Liu Guandao 劉貫道 was a court painter during the Yuan Dynasty (1271-1368).  In 1280, Kublai Khan, the Emperor of China, who also held the title the Great Khan, commissioned Liu Guandao to paint a scene of a hunting expedition to the Gobi Desert.  The painting features Kublai Khan wearing a Mongolian fur robe over Chinese silk brocades.  The Empress Chabi and their attendants are also portrayed along with their horses, and hunting animals.  The scene was painted in a very naturalistic style with barren hills and a caravan in the background.  The ink and colors scroll painting on silk measures 182.9 cm in height by 104.1 cm in width, and it is currently located at the National Palace Museum in Taipei, Taiwan.  Marco Polo describes a hunting scene with Kublai Khan from his work, The Book of Marco Polo:

"When the Great Khan wants to enjoy himself on a hunting expedition with great show, the two above named barons take twenty thousand hunters with them, with a pack of dogs amounting to some five thousand in all.  Once they have reached the countryside where the hunt is to take place, the great king is set in the centre with his barons; one of the captains marches on the right of the sovereign with his ten thousand men; the other on the left with his other ten thousand men.  The huntsmen are all distinguished from each other because ten thousand are dressed in red and the other ten thousand in pale blue..." 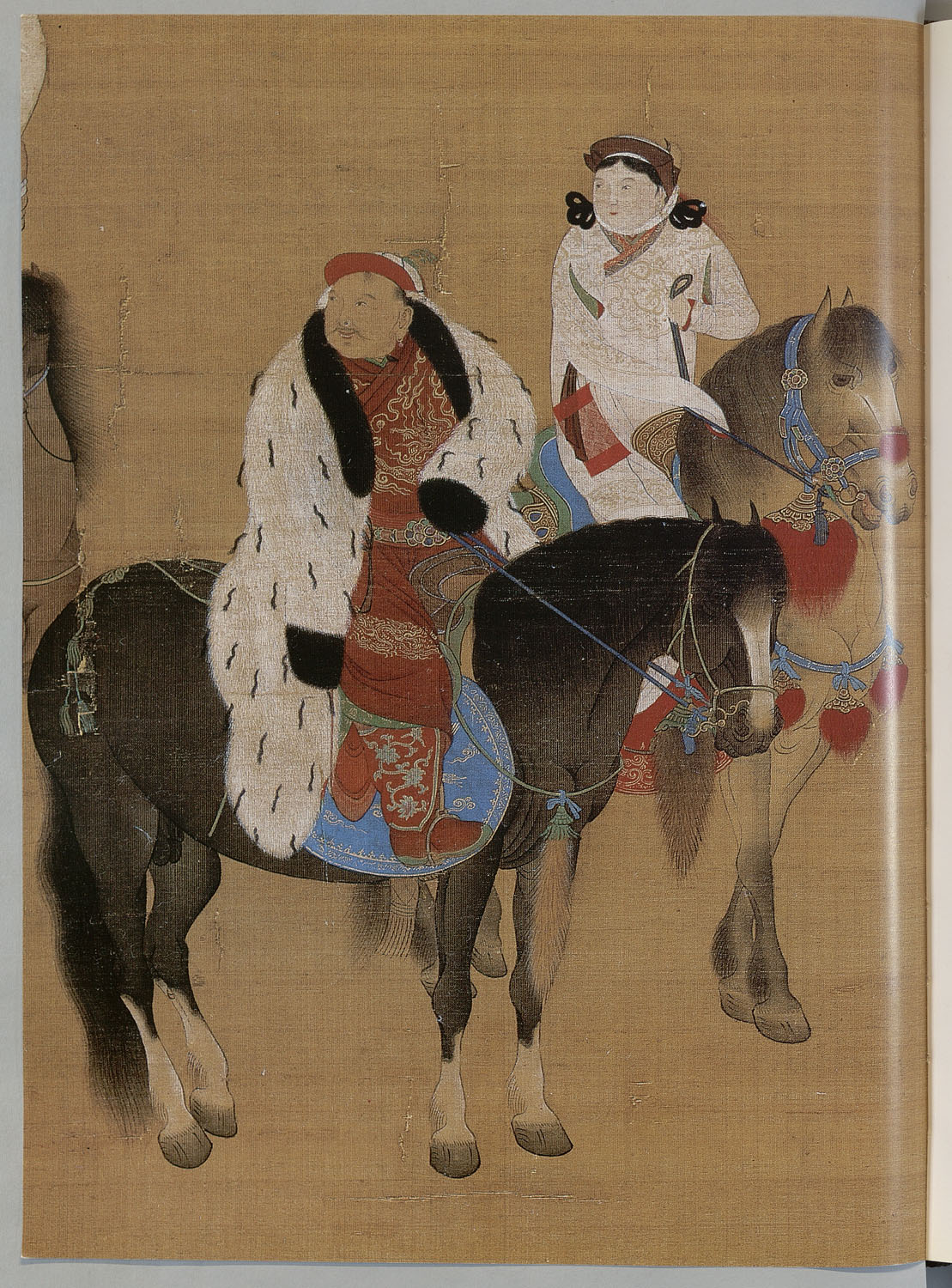 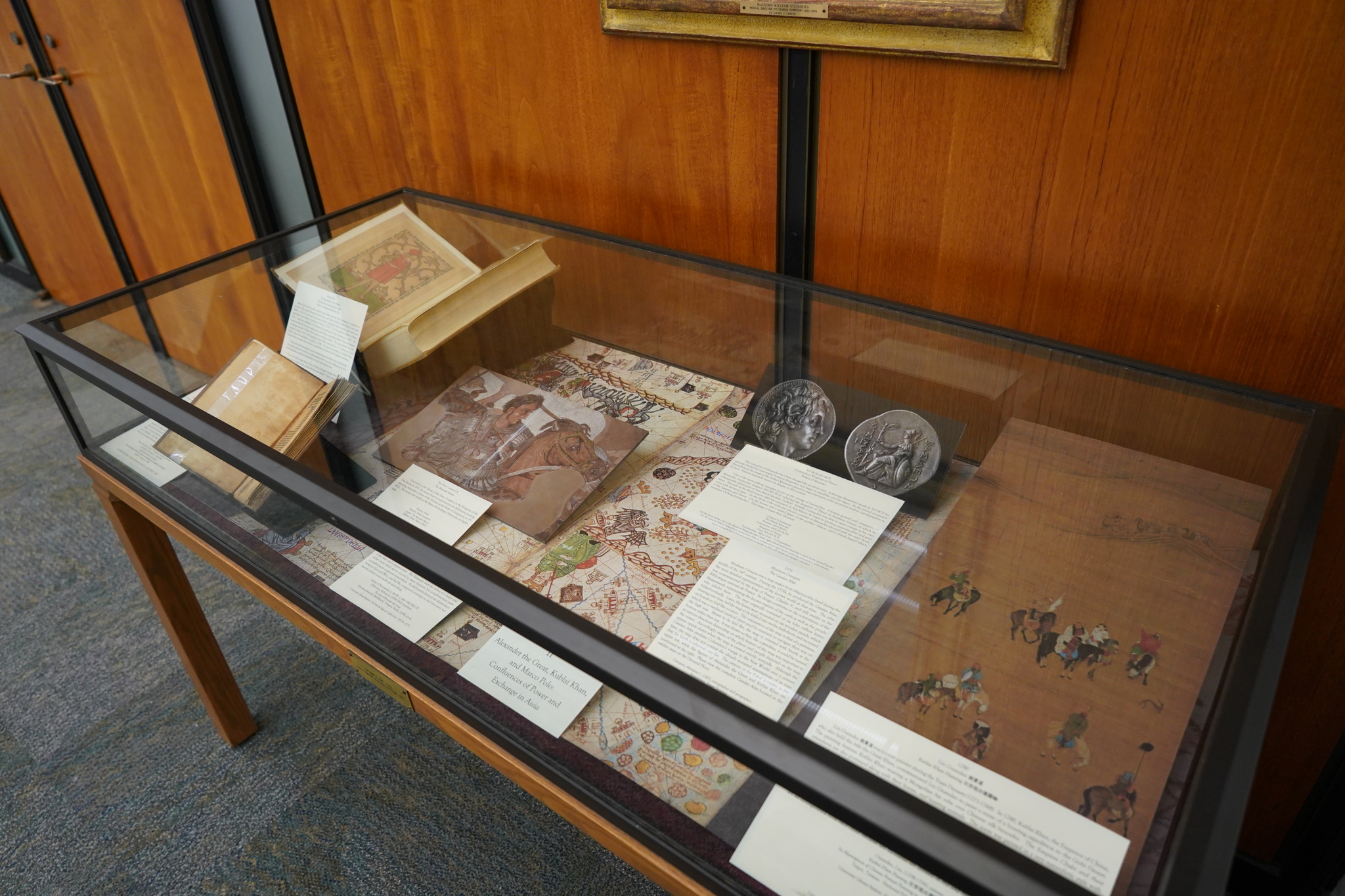 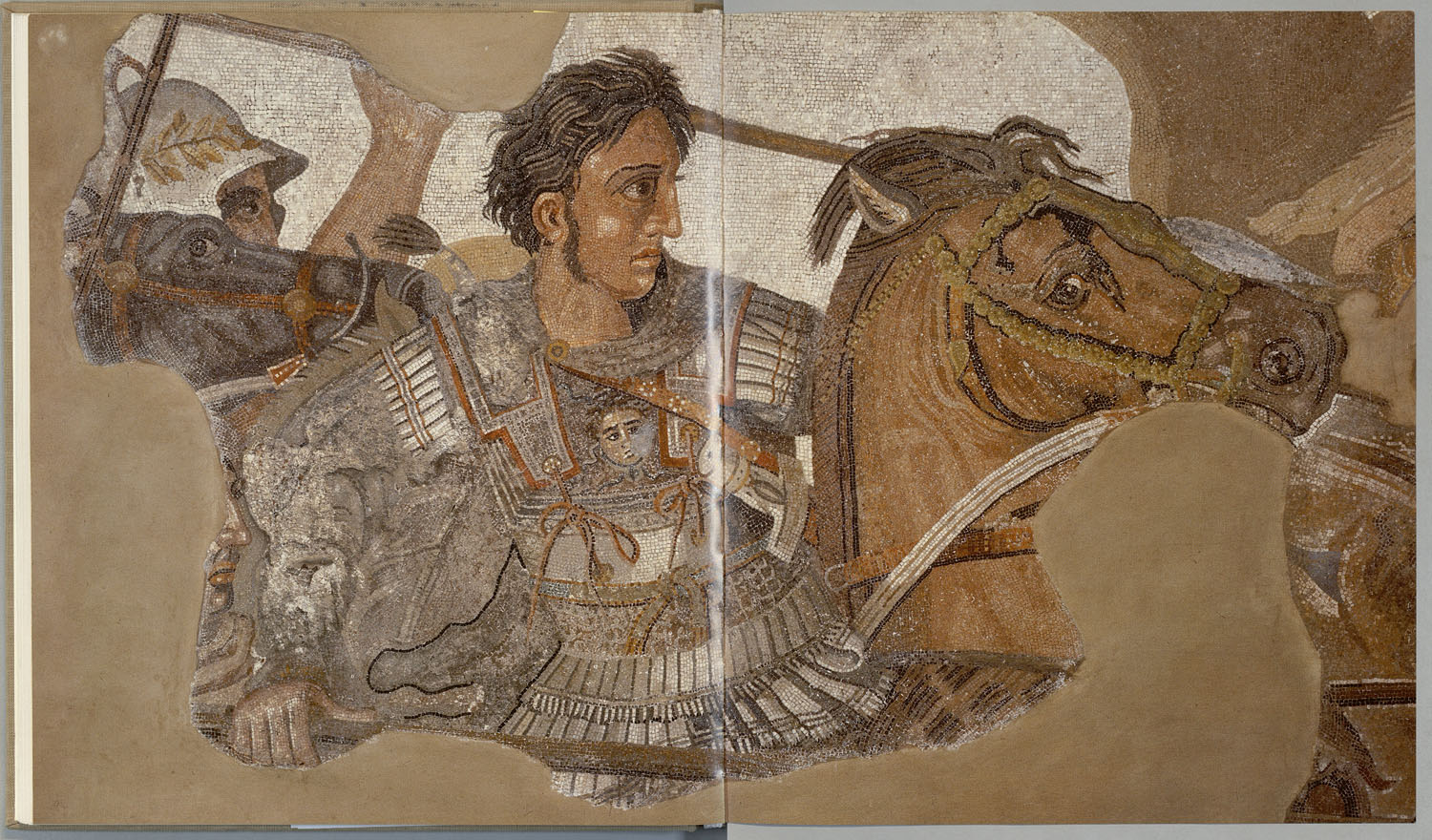 "The Alexandrian idea encompassed the marriage between East and West.  Alexander broke down for the first time the old Greek assumption that the earth was peopled by two groups:  Greeks and the rest.  Conquest must come first, and conquest came.  But Alexander kept the vision of a larger and richer unity which was to succeed it, many disparate but complementary parts contributing to a vast and varied whole.  He deliberately blurred the distinctions between East and West, and led the conquered countries to feel they were not merely subject races under an alien King."

Arrian of Nicomedia, The Life of Alexander the Great, 1958. 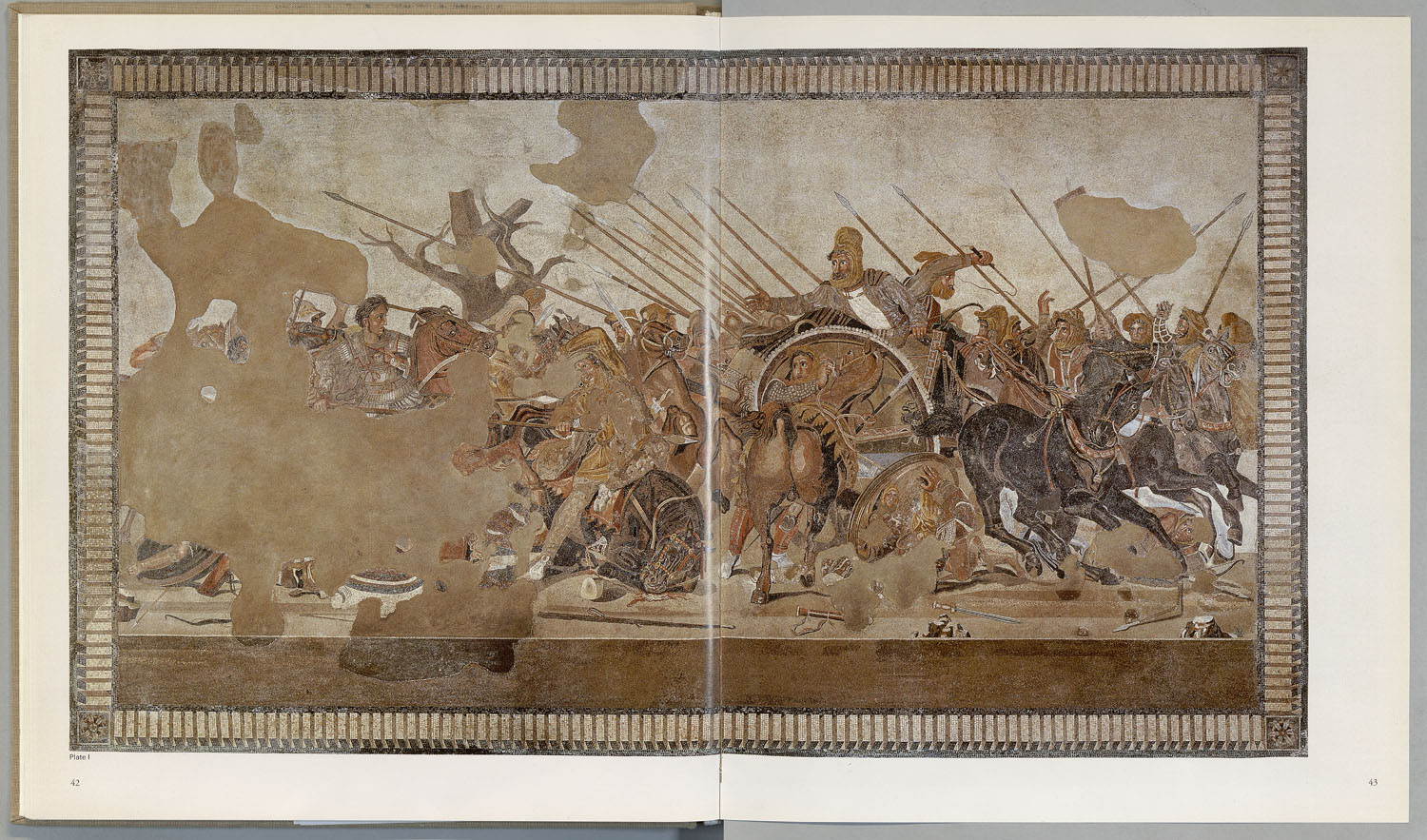 Uncovered in the House of the Faun, Pompeii, in the Kingdom of the Two Sicilies in 1831, the mosaic floor is a reproduction of a Hellenistic painting depicting Alexander’s defeat of the Persians at the Battle of Gaugamela in 331 BCE.  The mosaic now resides at the Museo Archeologico Nazionale, in Naples, Italy. 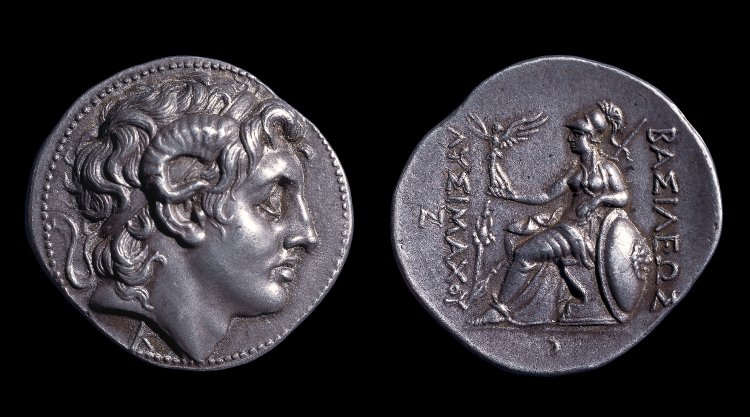 The conquests of Alexander the Great changed the world for ever.  Following Alexander's death in 323 BCE his generals divided his vast empire between themselves and began to squabble over his legacy.  In the period of turmoil that followed, the image of the deified Alexander played an important part, as his successors tried to cast themselves as his heir.  Various monarchs used coin designs in this context.

One of the most striking examples occurs on the coinage of Lysimachus.  A former general and companion of Alexander, Lysimachus (reigned 305-281 BCE) inherited the kingdom of Thrace in Northern Greece, to which he subsequently added parts of Asia Minor (modern Turkey).  Initially, Lysimachus was slow to mint coinage in his own name.  But early in the third century, after his conquests in Asia Minor, he began to produce stunning silver and gold coins with identical types.  On the front of the coins was placed a portrait of Alexander adorned with the ram's horn of the Egyptian god Amun.  On the reverse was a seated figure of the goddess Athena, and a Greek legend which translates 'Of King Lysimachus'.  This image is larger than life-sized.

On the front of the coin is the Head of Alexander the Great, right, diademed and wearing a ram’s horn;dotted border.  On the verso is Athena Nikephoros seated left; Nike in outstretched right hand crowning inscription with wreath; spear resting behind; left arm resting on shield; to left, cult image; in exergue, crescent. 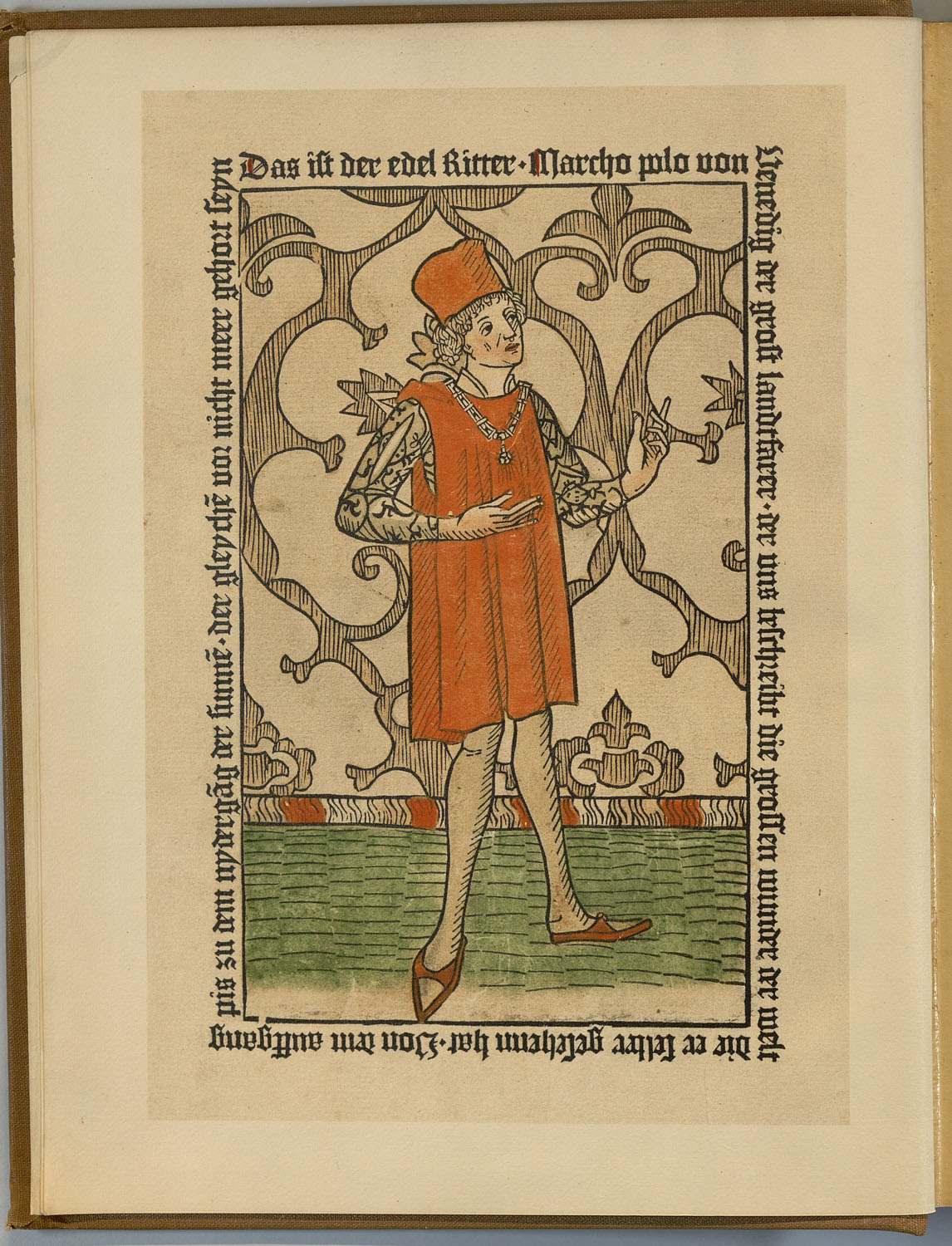 Portrait of Marco Polo from The Description of the World, Marco Polo, 1986.

Marco Polo, the Venetian explorer and writer, was the first European to chronicle an account of his travels through Central Asia and China with his father Nicolò and uncle Maffeo.  In 1271, at the age of seventeen, Marco embarked with his father and uncle on a twenty-four year odyssey, returning to Venice in 1295.  The first printed edition of Marco Polo’s Travels was published in Nurmberg [Nuremberg] by Fricz Creüssner in 1477.  The book was titled Hie hebt sich an das puch des edeln Ritters vn landtfarers Marcho Polo, and featured a full-page woodcut of Marco Polo wearing traveling clothes. 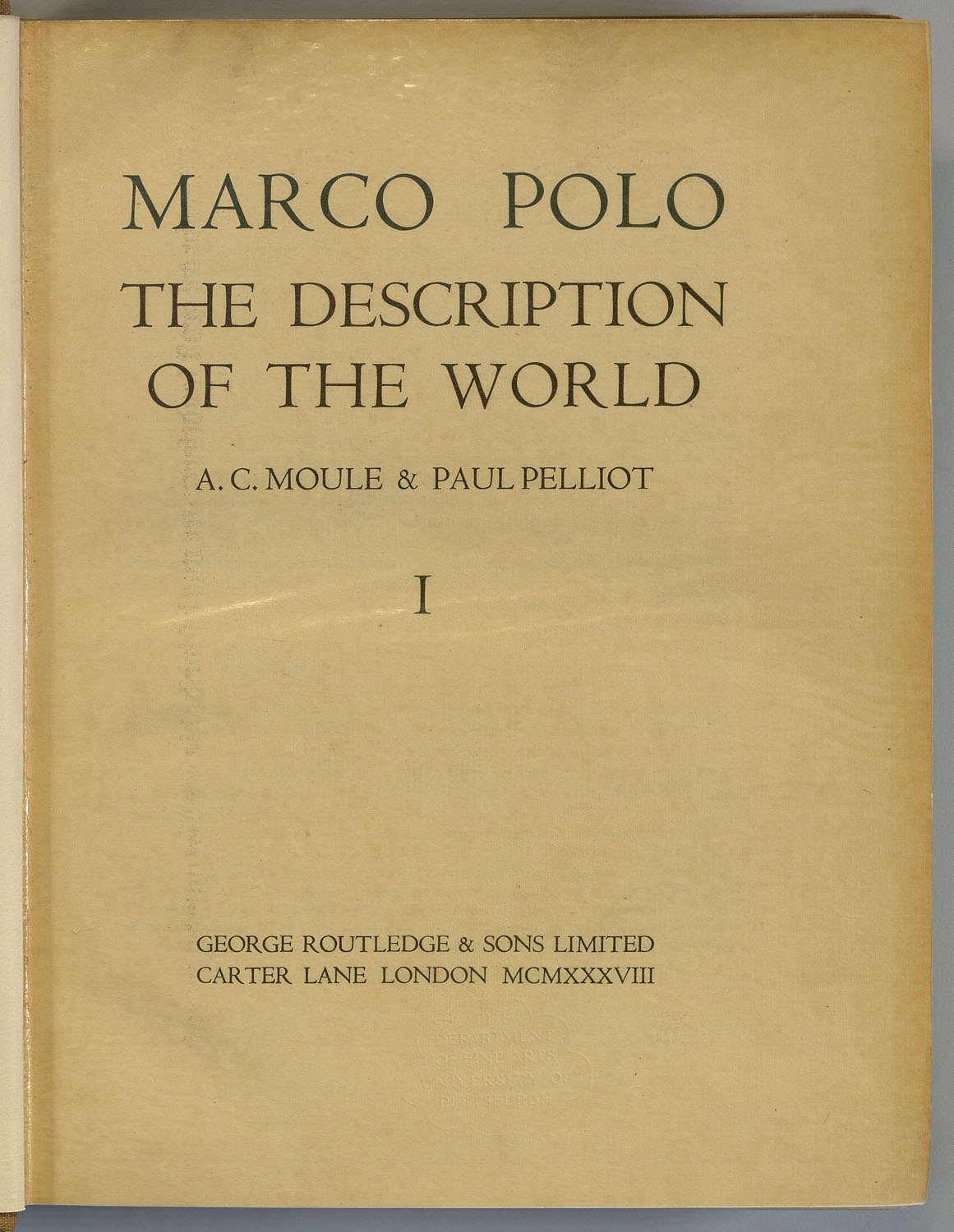 The Description of the World, Marco Polo, 1986.

This same portrait was also included in Marco Polo’s The Description of the World, translated by A. C. Moule and Paul Pelliot, which was published in London in 1938.  The type-set inscription in Middle High German that surrounds the woodcut is copied below followed by the English translation:

"This is the noble knight Marco Polo of Venice, the great traveler who described for us the great wonders of the world, which he saw himself.  From sunrise to sunset, you will not hear more about his equal."

Marco Polo, The Description of the World, 1986. 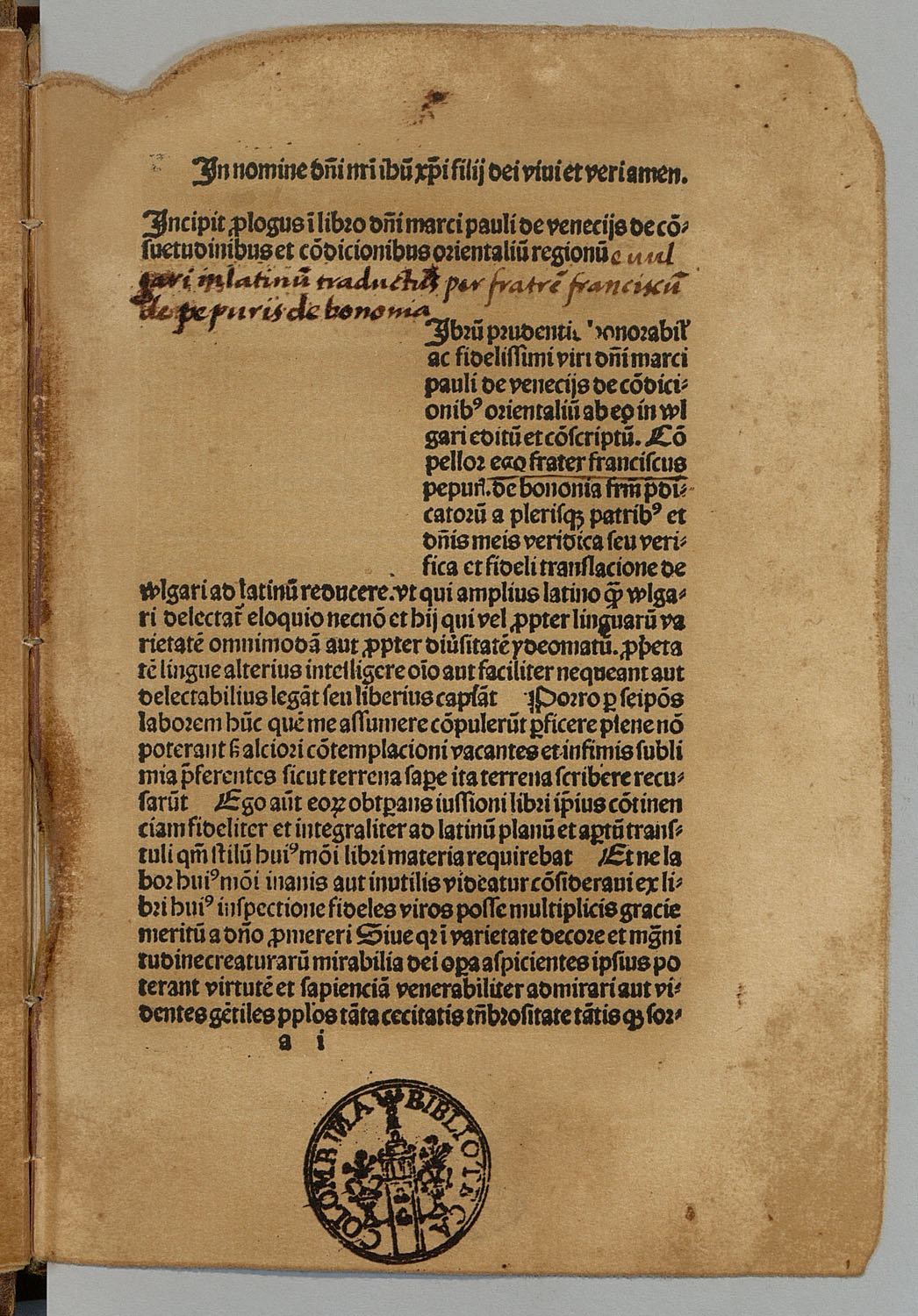 The Description of the World, Marco Polo, 1986.

The printing of Marco Polo’s account of his travels through Central Asia and China in Nuremberg in 1477 sparked the age of global exploration and discovery, and with it the advancement of European cartography later in the 15th century.  The Libro de las Maravillas del Mundo is a facsimile of the Latin edition of Marco Polo’s work titled De consuetudinibus et condicionibus Orientalium regionum.  It was translated from the Franco-Venetian by Francesco Pipino, and printed at Gouda by Gerard Leeu between 1483 and 1485.  This facsimile was made from the copy of the Latin edition that belonged to the explorer and colonist Christopher Columbus, and has been printed with his margin notes and annotations.

Marco Polo recounts his mission to “The Big River Pulchanchimet and A Very Beautiful Bridge,” where he was sent by Kublai Khan, the emperor of China, in chapter twenty-seven:

"After finishing what I have for the time being decided to relate concerning the province of Cathay, the city of Cambalú and the magnificence of the Great Khan, I shall now briefly describe the border regions.  The Great Khan once dispatched me, Marco, to remote regions on a business errand for the empire, and leaving from the city of Kambalu, I was away for several months.  I shall therefore refer to all that I found upon going and coming back on that route…"

Marco Polo, The Description of the World, 1986.