Travelers Along the Silk Roads, 10th Century to the Present @ Pitt: Horses and Dynasties

Horses and Dynasties: Cartography and Painting in China

Universal Map of the Great Ming 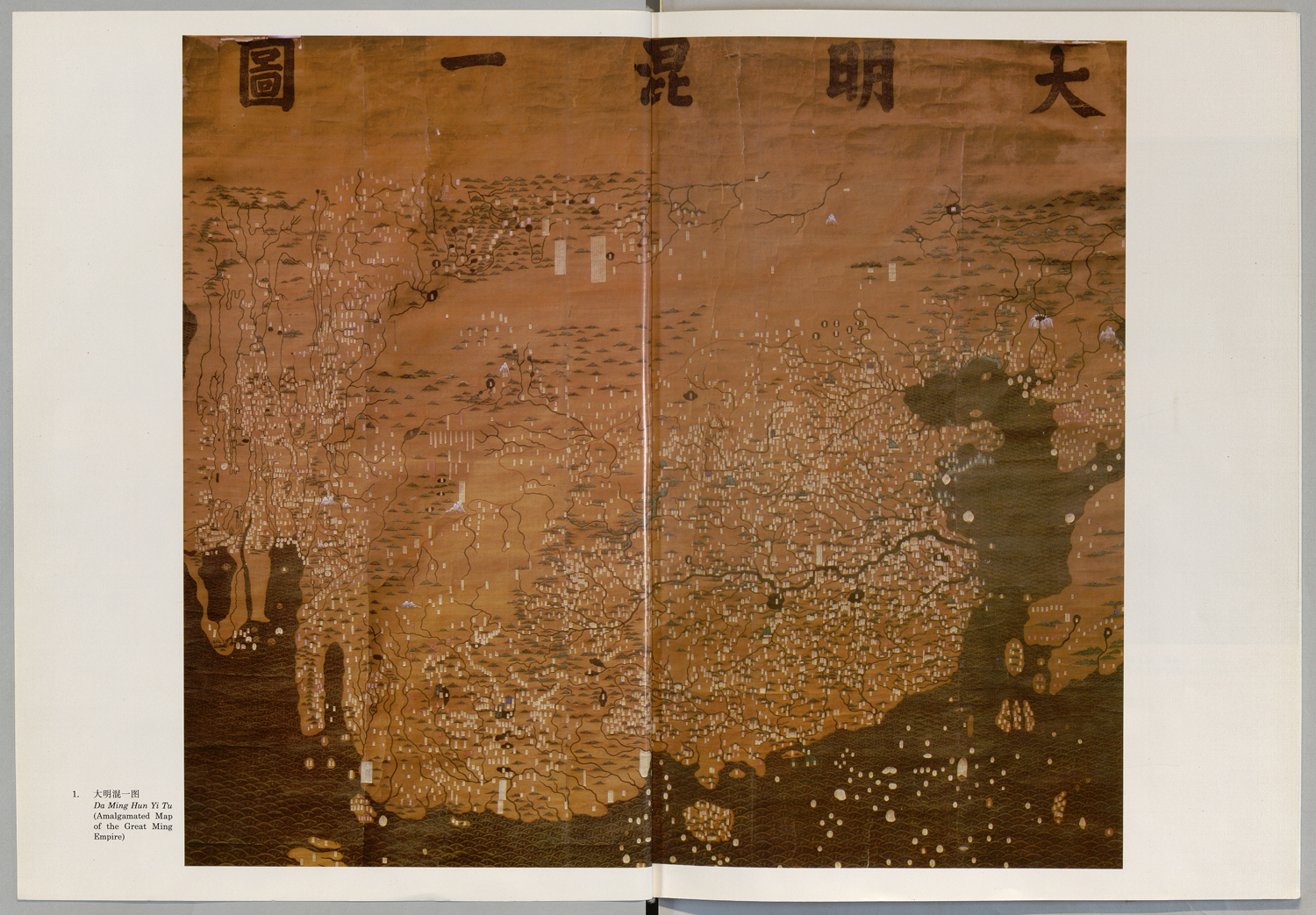 The Da-Ming hunyi tu 大明混一圖, also known as the Universal Map of the Great Ming, is a Chinese world map produced by court painters during the Ming Dynasty (1368-1644).  The map portrays the central part of Japan in the east, the Atlantic coast of Europe and Africa in the West, Java in the South, and Mongolia in the North.  The original notes on the map were written in Chinese, but labels with Manchurian translations were added during the Qing Dynasty (1636-1912).

Court painters were employed as cartographers throughout the Ming Dynasty.  And although the Da-Ming hunyi tu lacks the artist’s signature and date of production, it has been determined that the map was made in the 22nd year of the Hongwu reign 洪武 in 1389 through the analysis of historical place names.  The map was painted in the style of a blue-and-green Chinese landscape painting, with ink and color on stiff silk.  It is very large, and measures 386 cm in height by 456 cm in width.  The Da-Ming hunyi tu was composed with north at the top, and was designed to hang vertically on a wall.  This exceptional Chinese world map, created shortly after the Catalan Atlas of 1375, is located in the ​Zhongguo diyi lishi dang’anguan 中國第一歷史檔案館, the First Historical Archives of China, or FHAC, in Beijing. 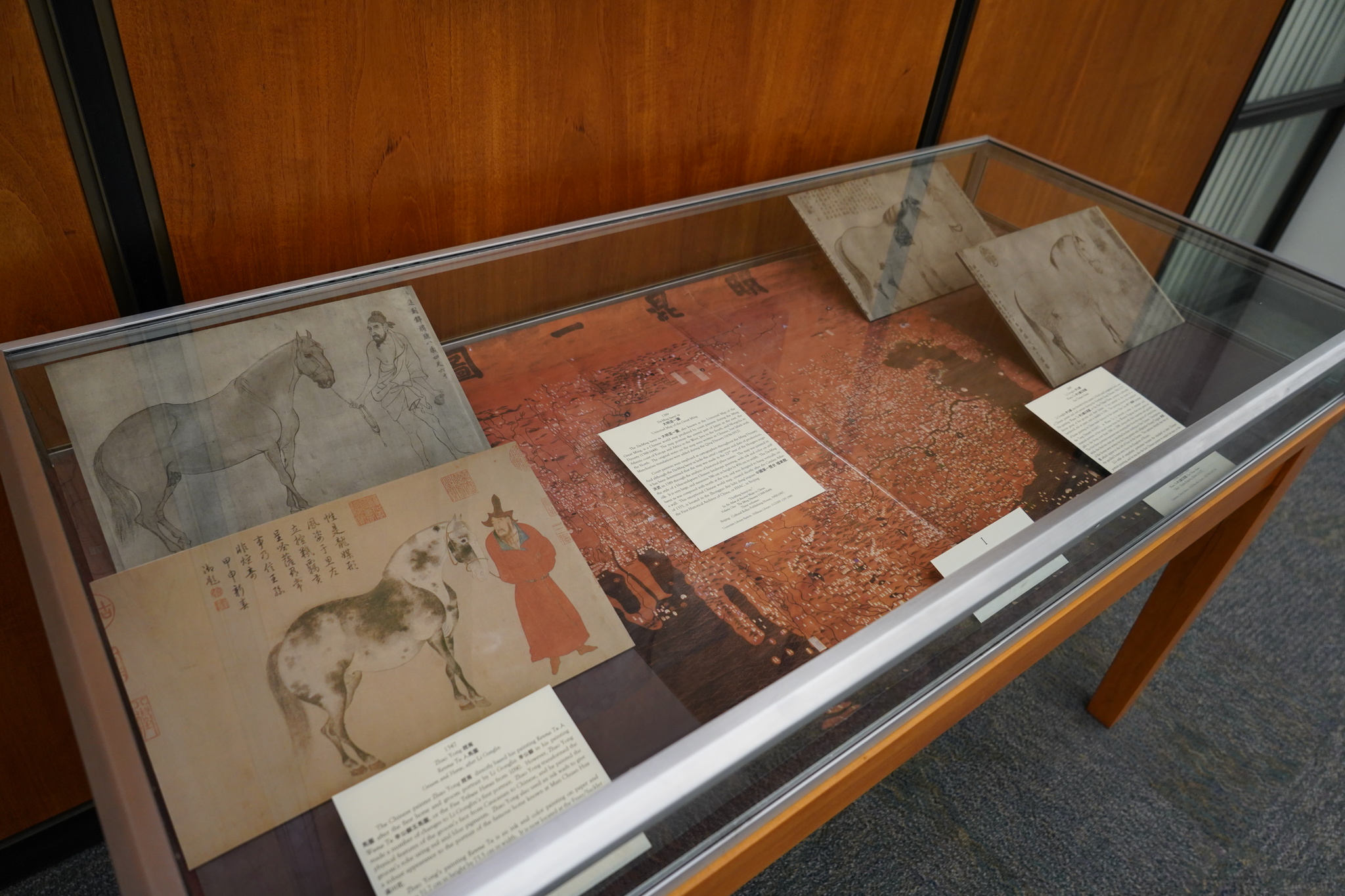 Li Gonglin 李公麟, also known by the names Li Boshi and Longmian Jushi, was a Chinese painter and civil servant during the Northern Song Dynasty (960-1127).  His painting, Wuma Tu 李公麟五馬圖, or the Five Tribute Horses, portrays a culturally diverse group of five grooms and their horses.  It was painted in the form of a handscroll, ink on paper, and is datable to 1090.  The painting honors the tradition of horse painting in China made famous by the painter Han Gan 韩干/韓幹 during the Tang Dynasty (618-907).  In Wuma Tu, Li presents a series of intimate and nuanced portraits of five actual horses from the Western Regions that were given as gifts to the Song court from 1086 to 1088, along with their equerries and grooms.  The first three portraits represent men wearing attire from the regions of Central Asia, while the final two men are identified by their clothing as Han Chinese.  Descriptions of the horses were written by the Song painter and calligrapher Huang Tingjian 黃庭堅, which appear to the left of four of the horses.  The captions identify that two of the speckled horses were from the Kingdom of Khotan.

Li’s style of empathetic portraiture became the standard in later Chinese portrait painting, and he was also the first Chinese painter to employ bai miao, or the method of line drawing with ink, in which limited shading was used for dramatic effect.  Li’s painting, Wuma Tu, was known to be in Japan, possibly in a private collection in Kyoto, before World War II.  The scroll has not been seen since the war ended, and its present condition and location are unknown. 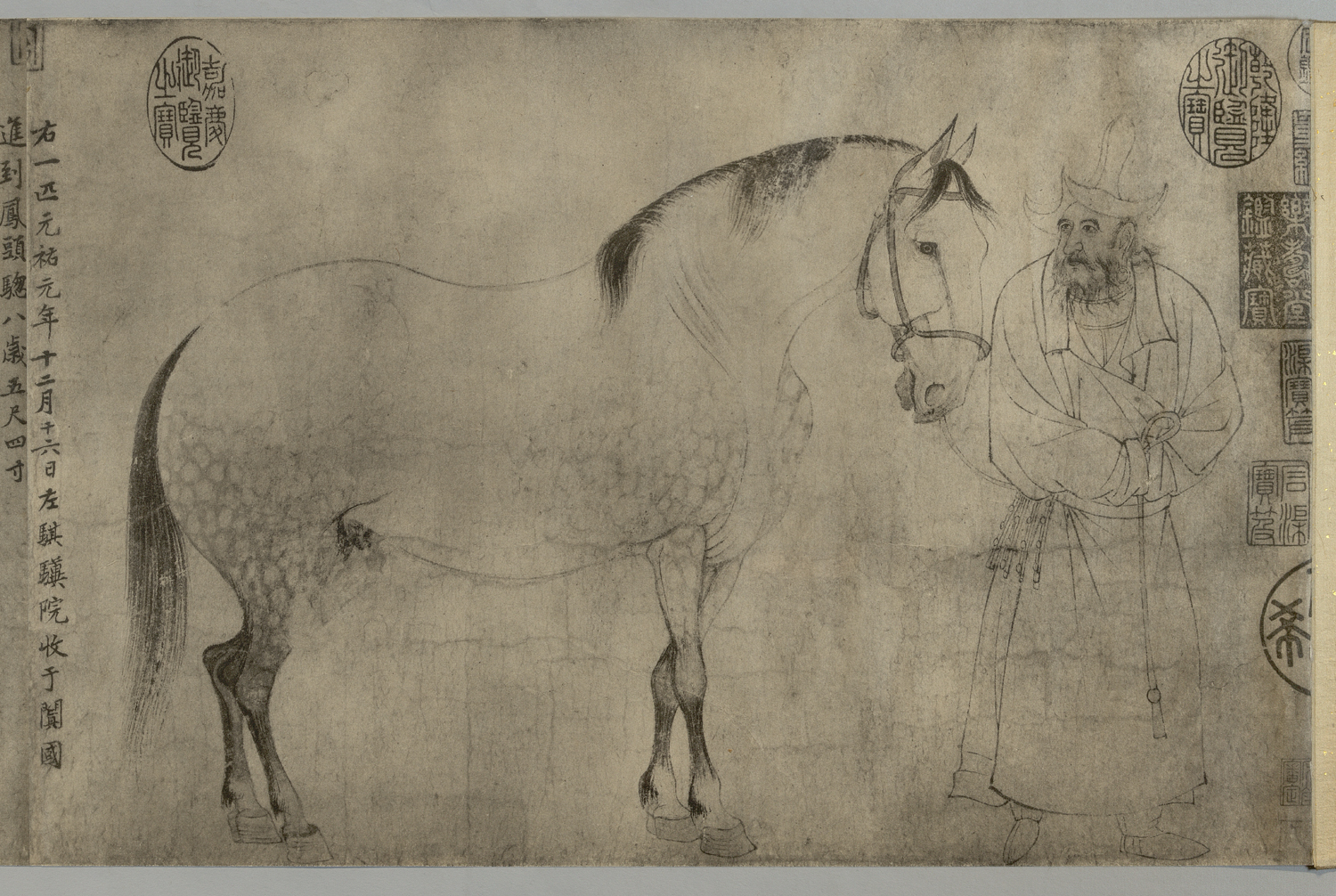 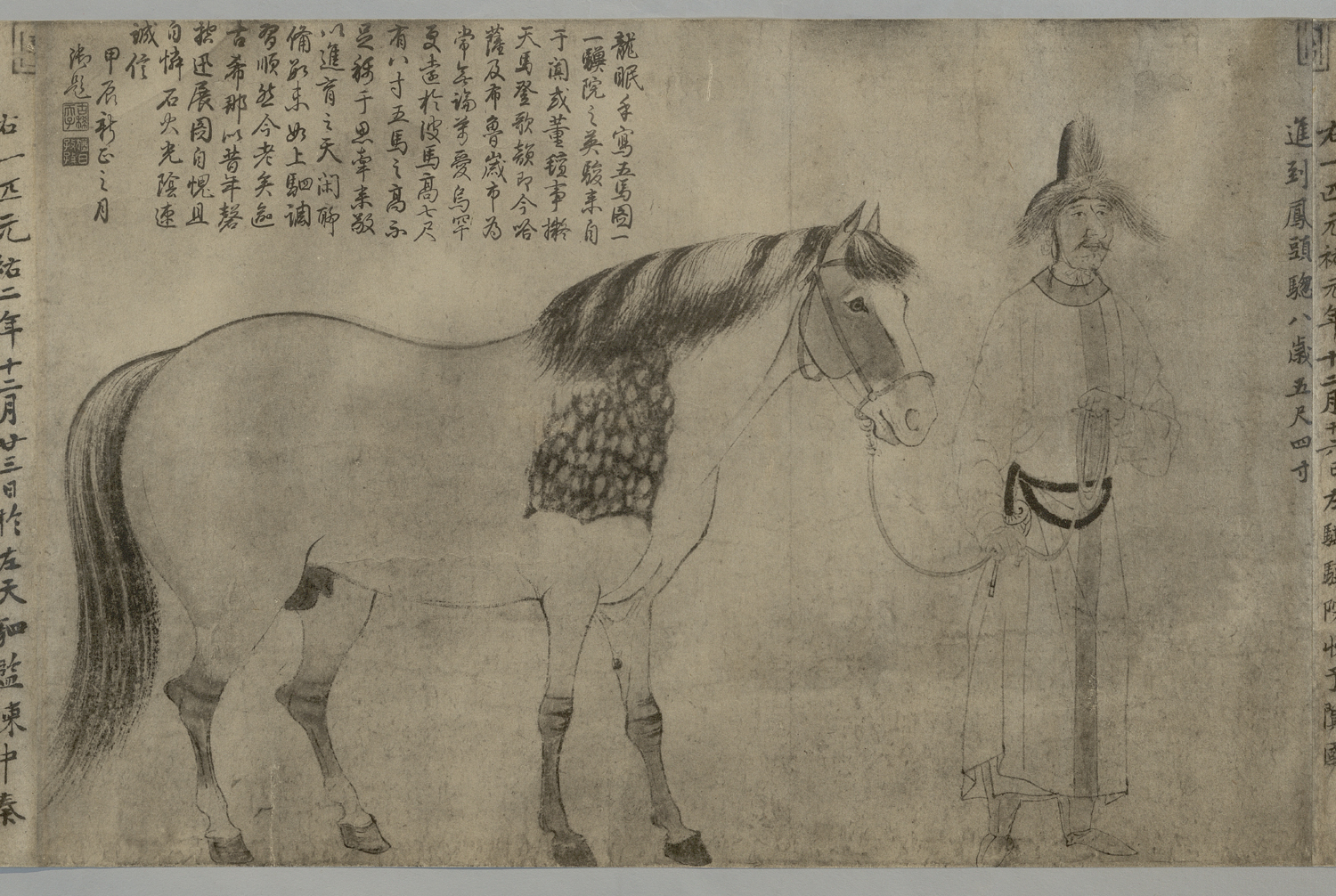 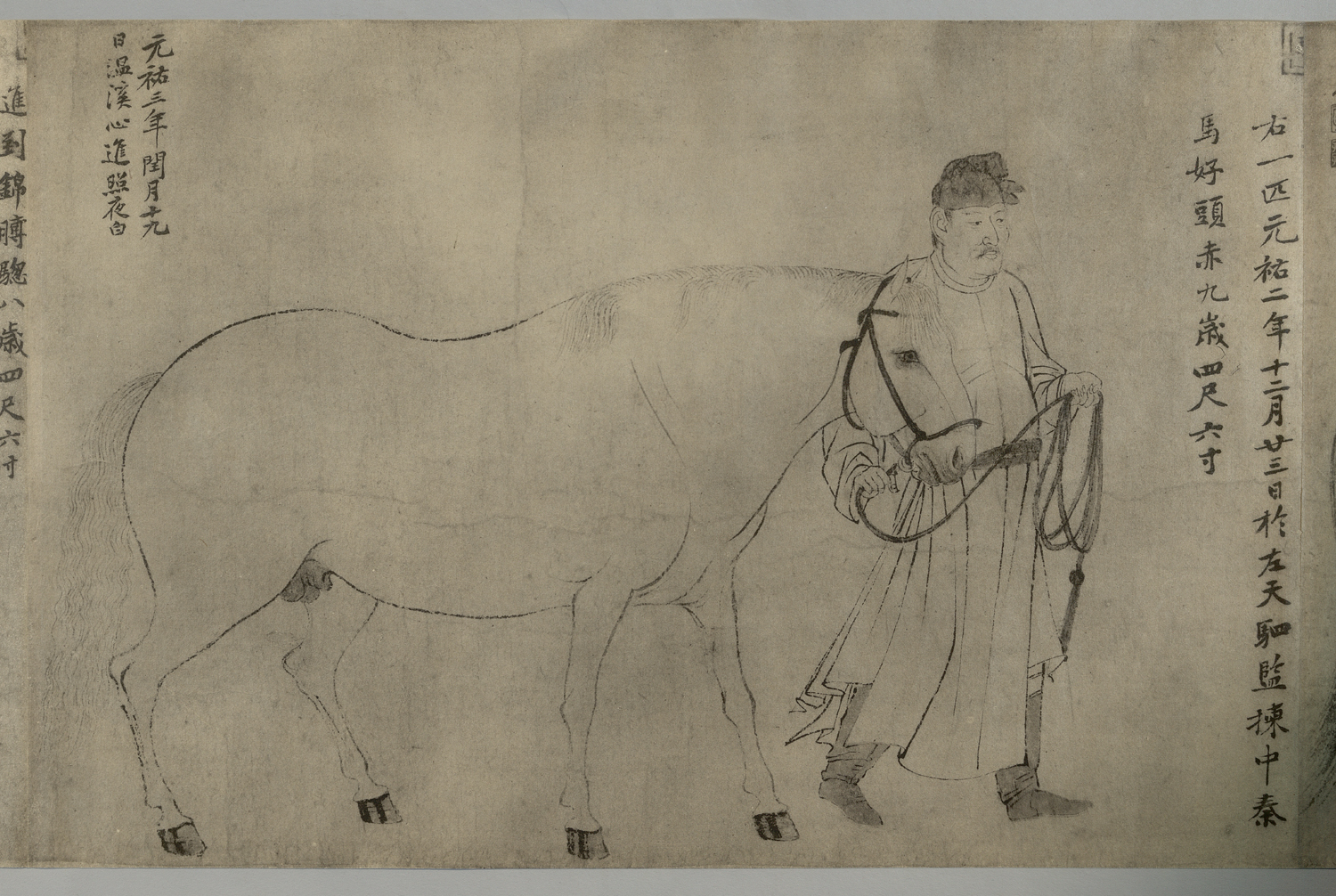 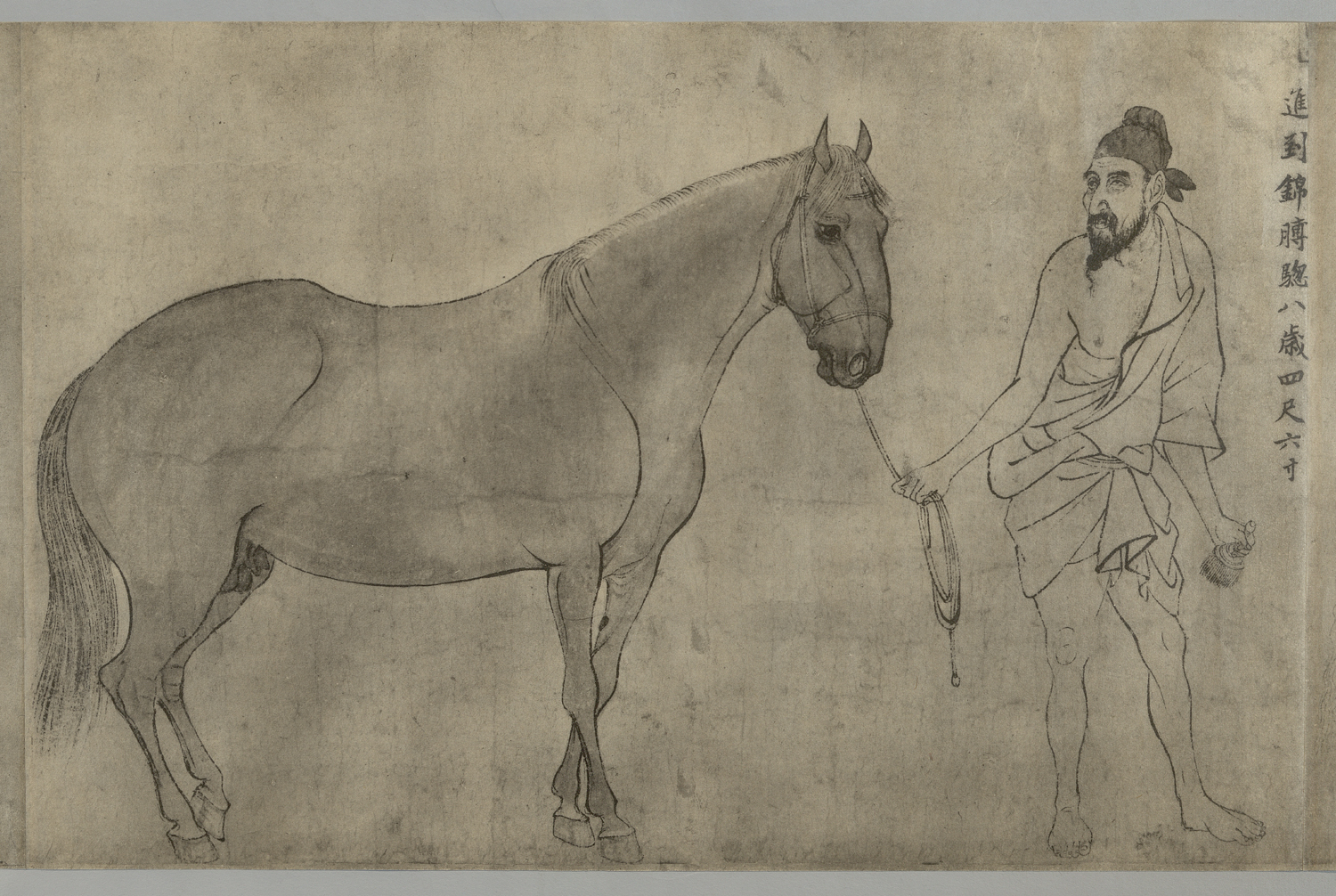 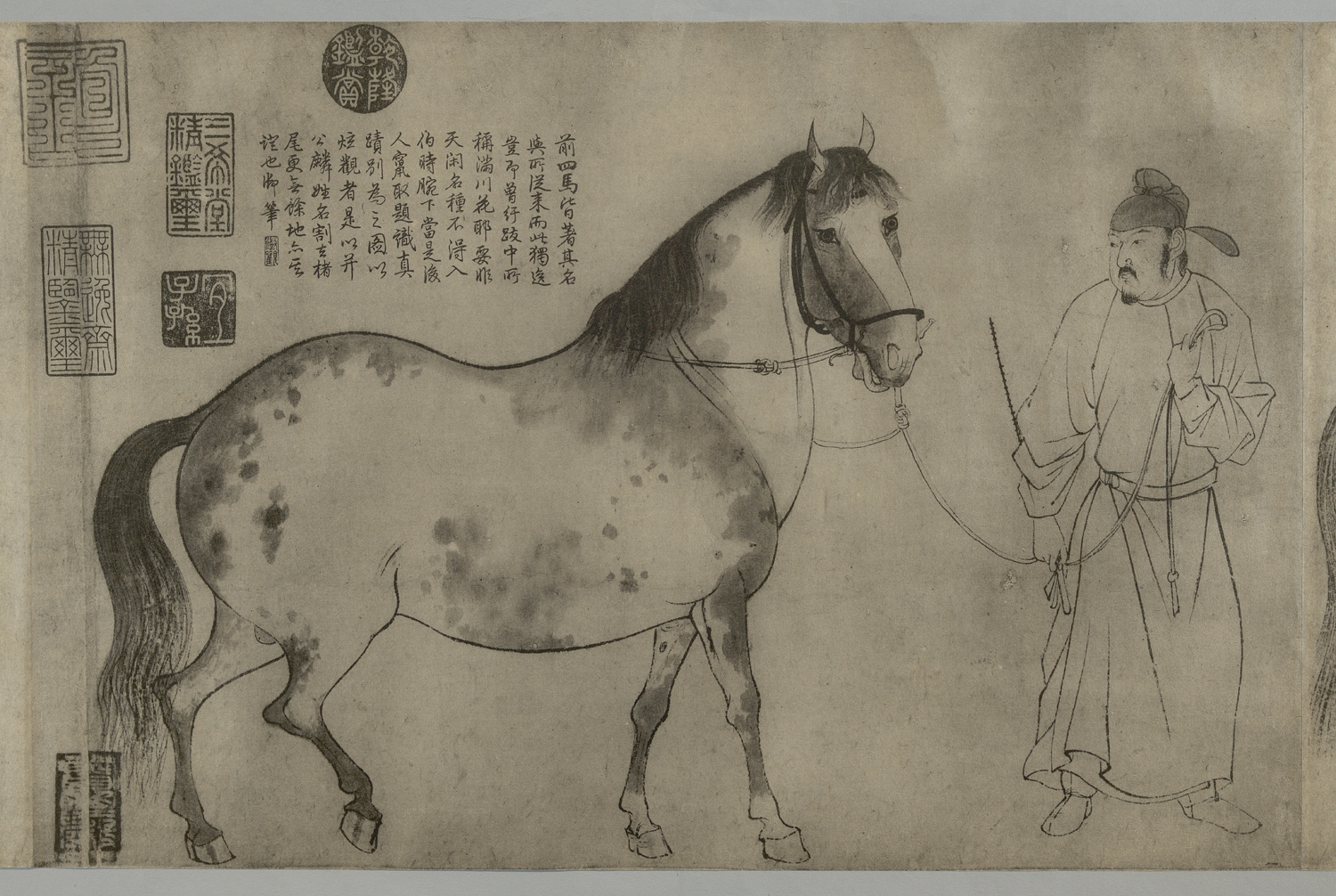 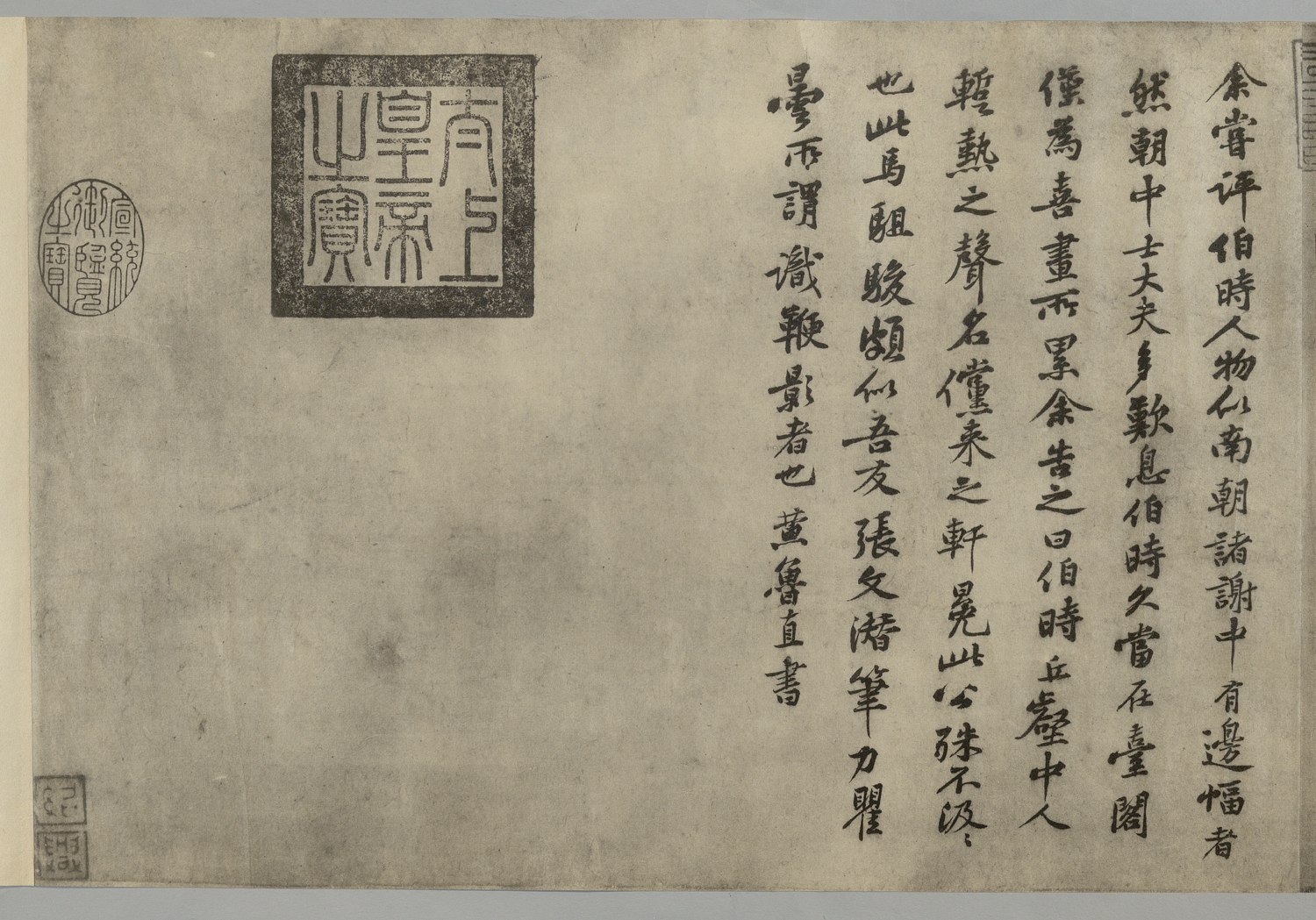 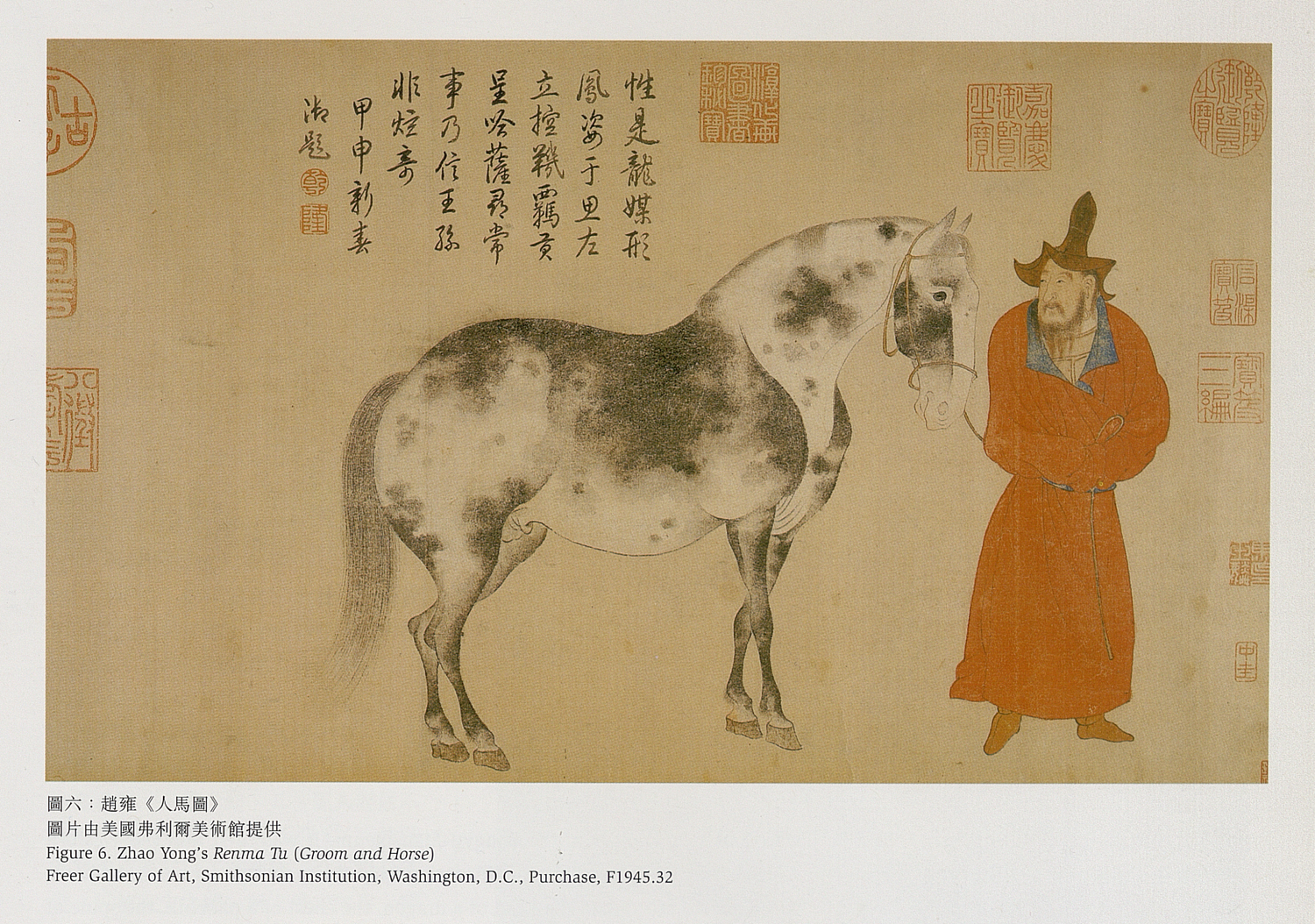 The Chinese painter Zhao Yong 趙雍 directly based his painting Renma Tu 人馬圖 after the first horse and groom portrait by Li Gonglin 李公麟 in his painting Wuma Tu 李公麟五馬圖, or the Five Tribute Horses from 1090.  However, Zhao Yong made a number of changes to Li Gonglin’s first portrait.  Zhao Yong transformed the physical features of the groom’s face from Caucasian to Chinese, and he painted the groom’s robe using red and blue pigments.  Zhao Yong also used an ink wash to give a robust appearance to the portrait of the famous horse known at Man Chuan Hua 滿川花.

Zhao Yong’s painting Renma Tu is an ink and color painting on paper and measures 31.7 cm in height by 73.5 cm in width.  It is now located at the Freer/Sackler Gallery of Art at the Smithsonian Institution in Washington, D. C.