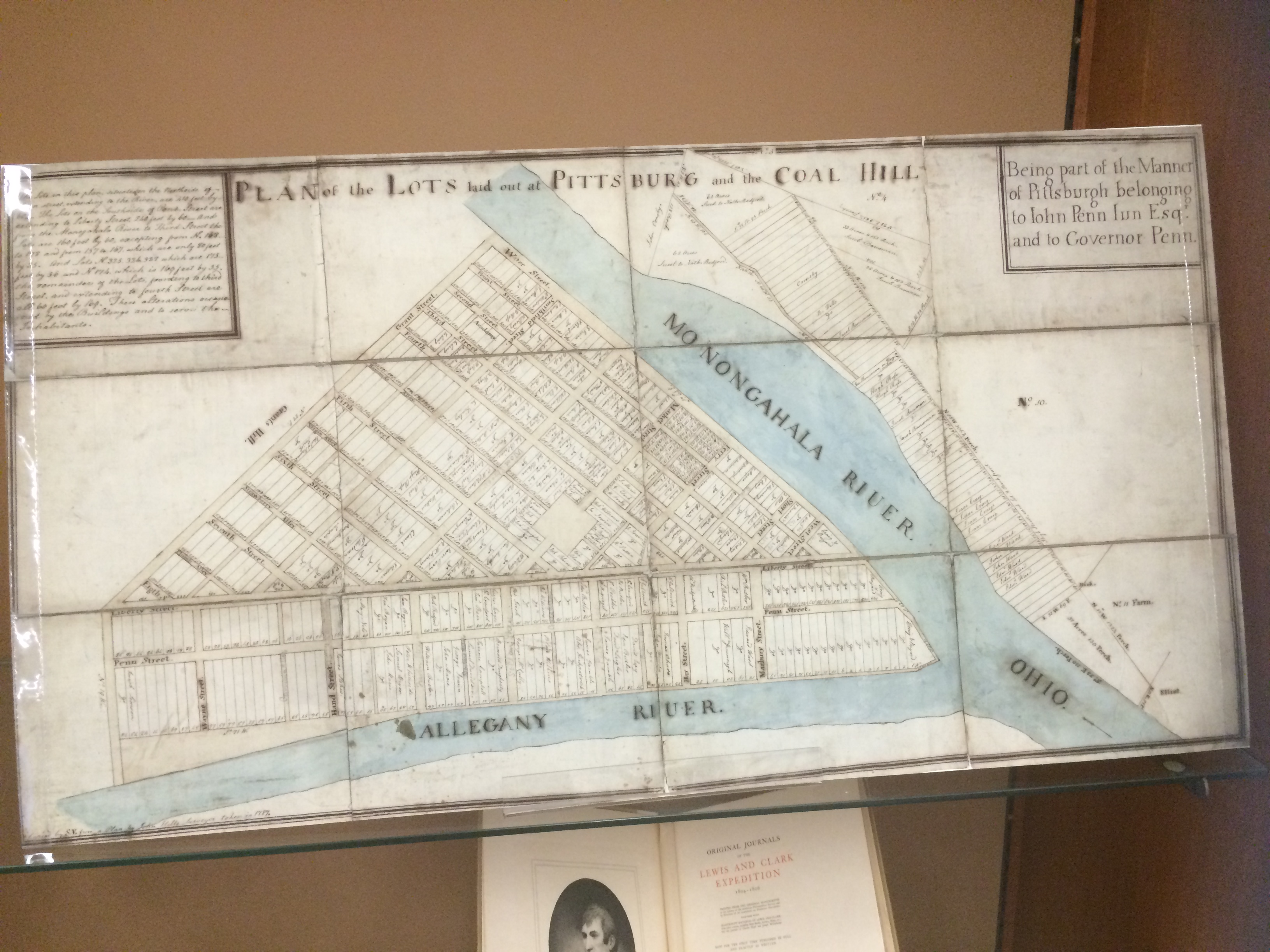 Plan of the Lots laid out at Pittsburg and the Coal Hill: Being part of the Manner of Pittsburg belonging to John Penn Jun Esqr. and to Governor Penn

This manuscript map of Pittsburgh from 1787 shows the names many landowners, lot numbers, the number of acres in larger sections, and the names of many streets. It also includes a detailed description of the lots and the streets in the upper left corner.​

William Faden was an English cartographer and map publisher who was appointed the royal geographer to King George III after the cartographer Thomas Jefferys. In this map, Faden shows the British and Spanish territories in North America after the end of the American Revolutionary War and the Treaty of 1784. 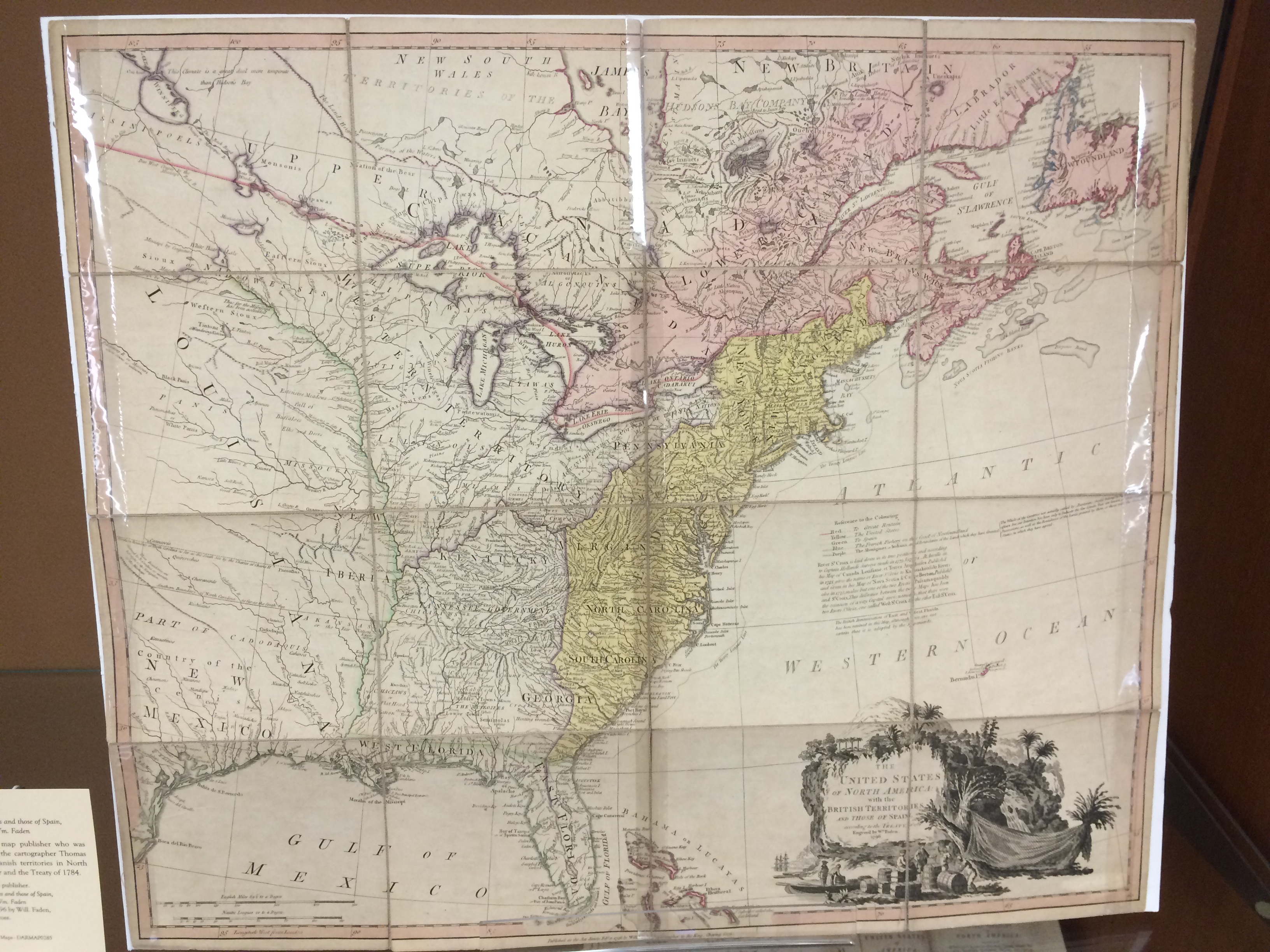 United States of North America: with the British Territories and those of Spain, according to the Treaty of 1784. Engrav’d by Wm. Faden.

Lewis Brantz was a ship captain who painted the earliest known view of Pittsburgh in 1790, and described the scene in his memoir, “The view enjoyed at this place, from two elevated spots is, in truth, the most beautiful I ever beheld.” This engraving is a rendering by Seth Eastman of Lewis Brantz's original watercolor painting of Pittsburgh from 1790. The engraving and the translation of Brantz's memoir were first published in volume three of Henry Schoolcraft’s Information respecting the History, condition and Prospects of the Indian Tribes of the United States in 1853. 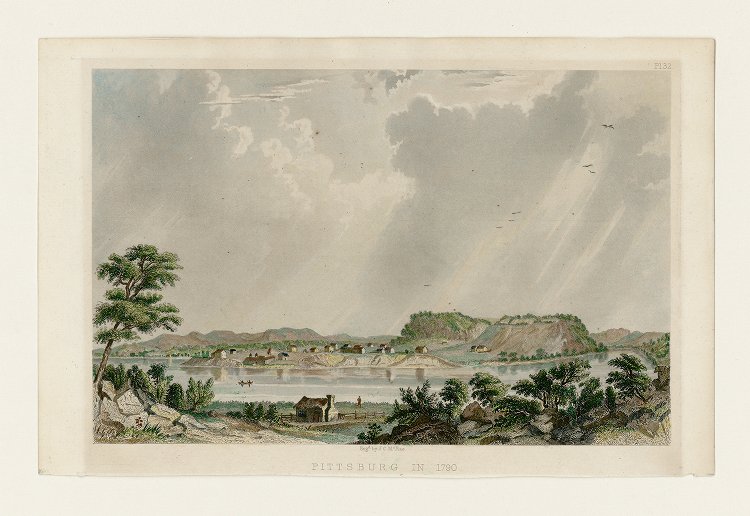 From A Journey in North America, containing a survey of the countries watered by the Mississipi, Ohio, Missouri, and other affluing rivers; with exact observations on the course and soundings of these rivers; and on the towns, villages, hamlets and farms of that part of the new-world; followed by philosophical, political, military and commercial remarks and by a projected line of frontiers and general limits, illustrated by 36 maps, plans, views and divers cuts.

[Pittsburg] contains, at the utmost, one hundred and fifty houses, some of which are built of brick, and the rest of wood. The neighbourhood of the Indians and the difficult communication between this town, Philadelphia, and Baltimore, appear to be the principal causes which have hitherto prevented its increase. Placed at the source of one of the noblest rivers in the world, navigable as far as the ocean, after flowing eleven hundred miles, through the finest and most beautiful countries on the surface of the globe; this town, when the Indian frontier is thrown back, * and the roads are rendered practicable, will certainly become one of the first inland cities of the United States.

*This has now taken place in consequence of the treaty made between the Indians and General Waine, in 1797. 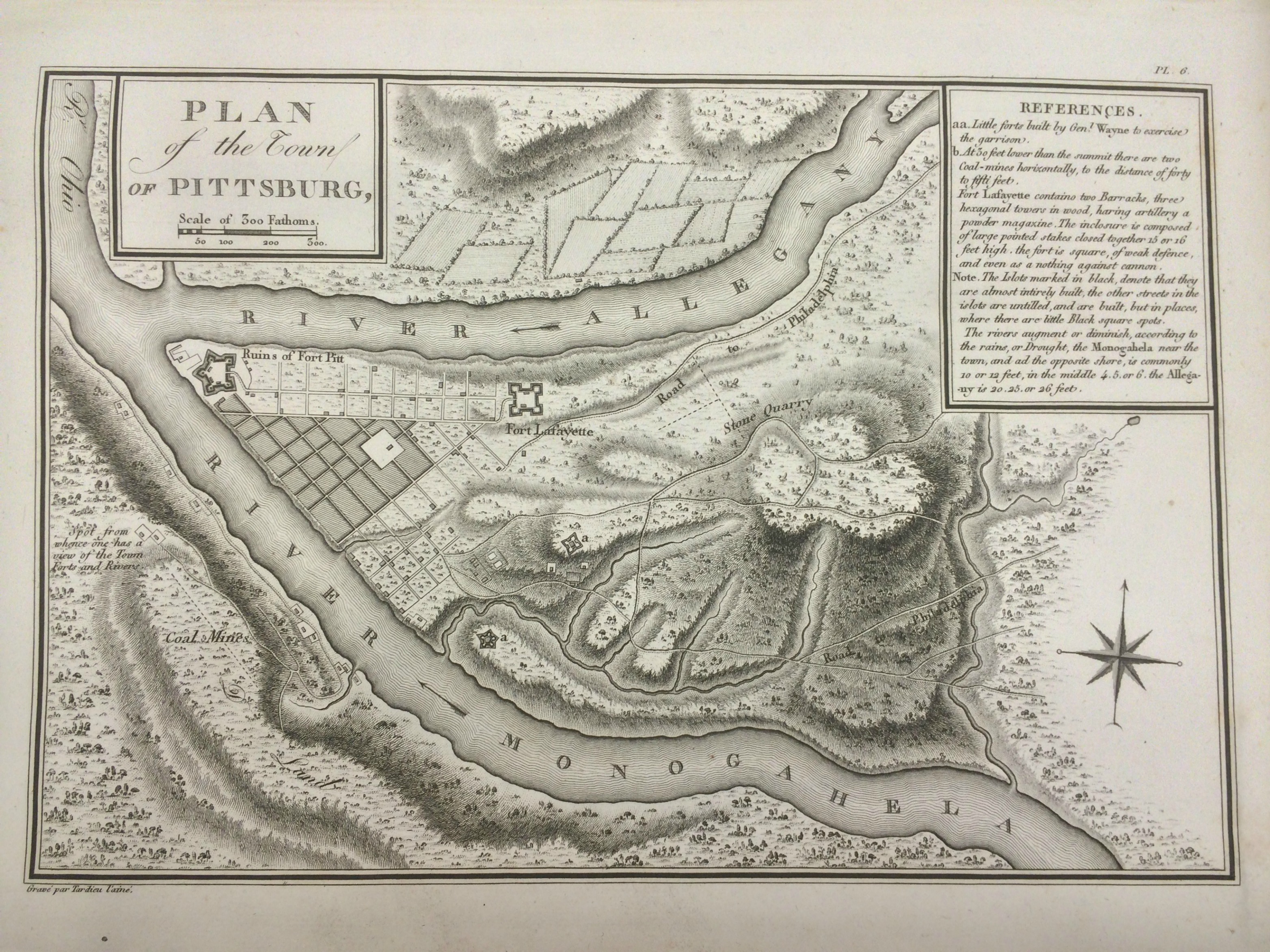 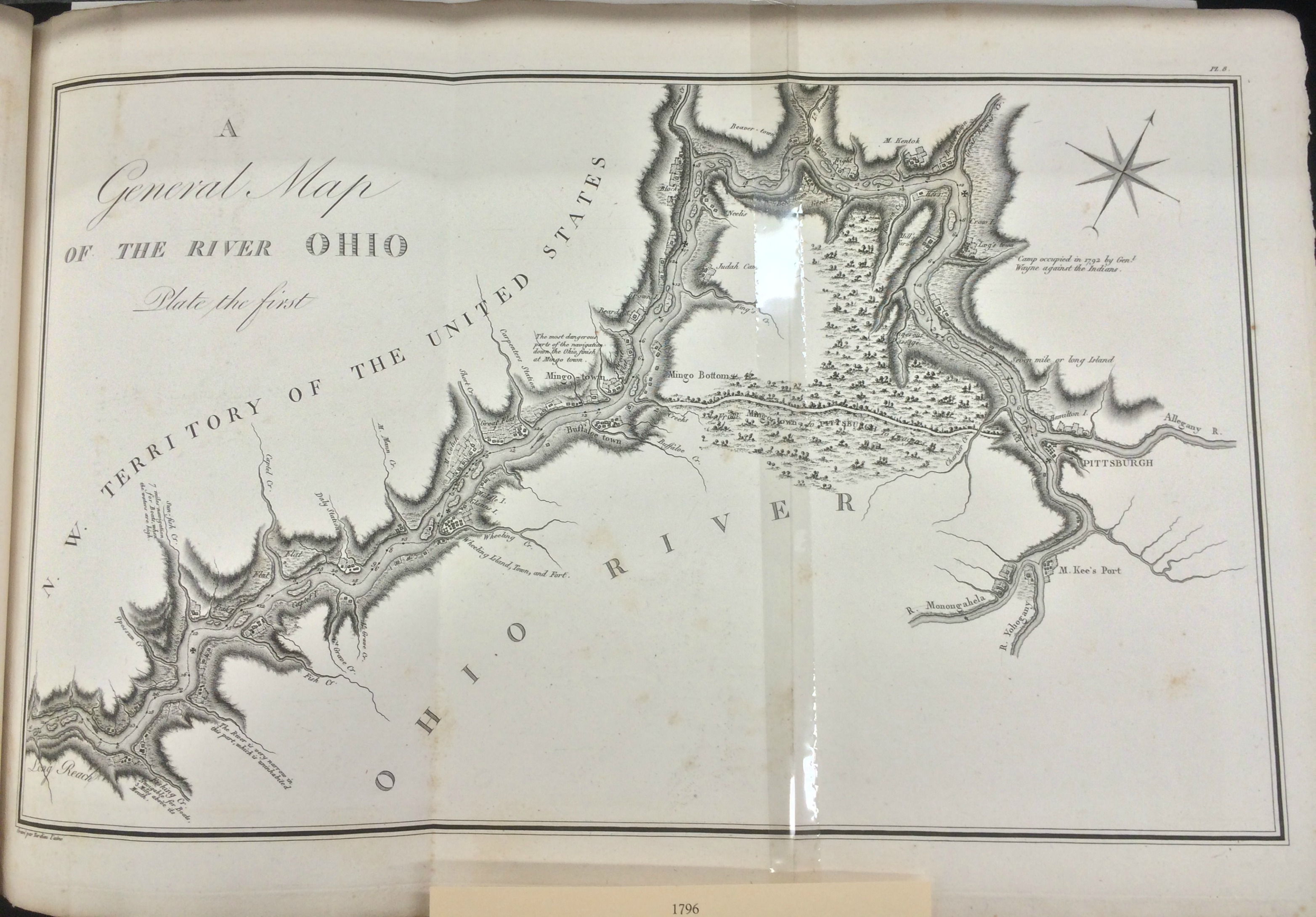 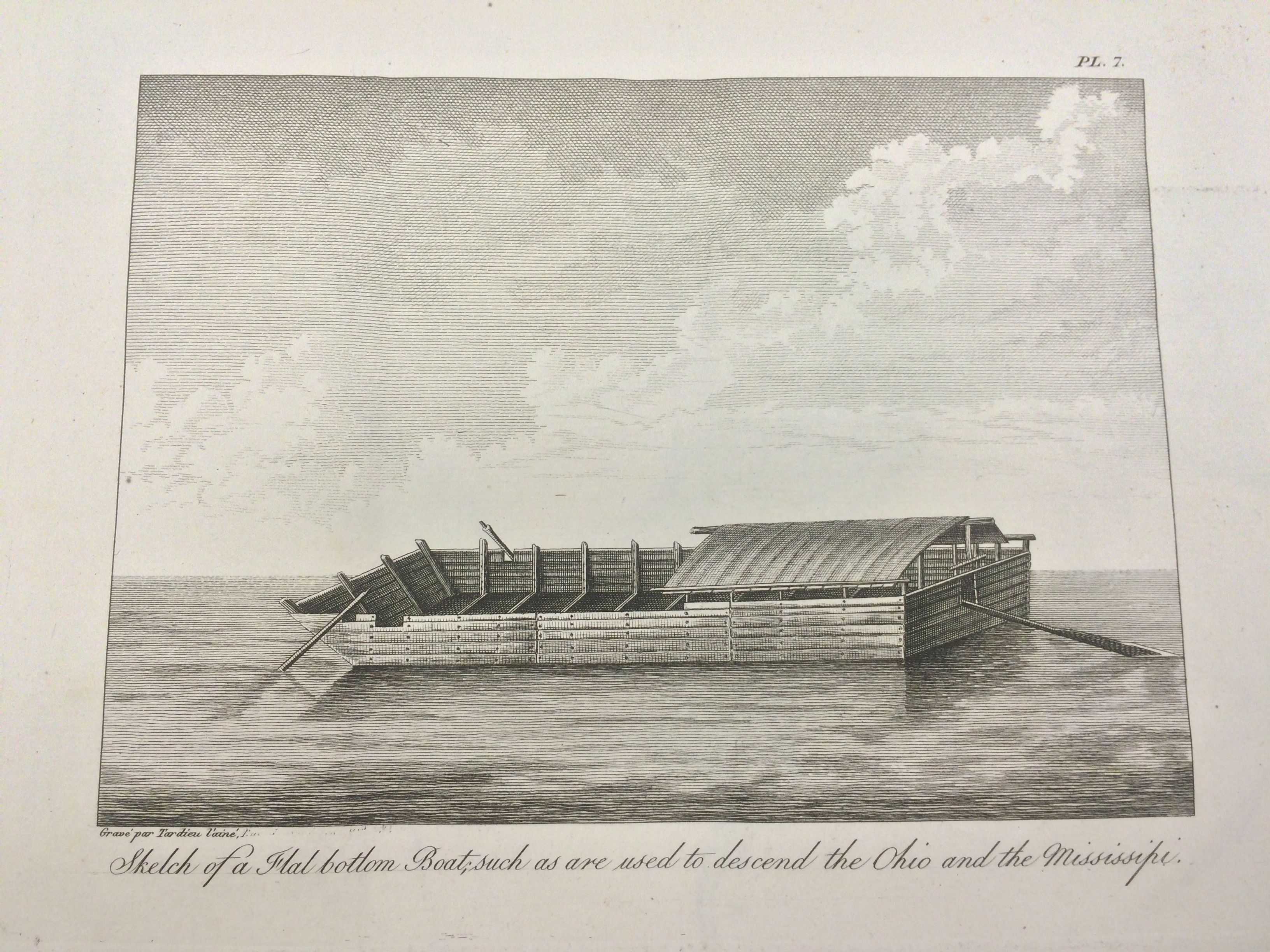