From American Notes for General Circulation

"Pittsburg is like Birmingham in England; at least its townspeople say so. Setting aside the streets, the shops, the houses, wagons, factories, public buildings, and population, perhaps it may be. It certainly has a great quantity of smoke hanging about it, and is famous for its iron-works. Besides the prison to which I have already referred, this town contains a pretty arsenal and other institutions. It is very beautifully situated on the Allegheny River, over which there are two bridges; and the villas of the wealthier citizens sprinkled about the high grounds in the neighbourhood, are pretty enough."

Sherman Day’s engraving, “Pittsburg from the North-West,” was first published in 1843, and is one of the earliest images to highlight the industrial scene in Pittsburgh. The view is from below the point on the Ohio River, with much of the city visible, and with billowing smoke from the many Pittsburgh smokestacks the most prominent feature of the engraving. Day instructed the engraver, “Please give to the smoke [of Pittsburgh] a graceful easy appearance. The buildings in the foreground are very dark being constantly exposed to smoke.” 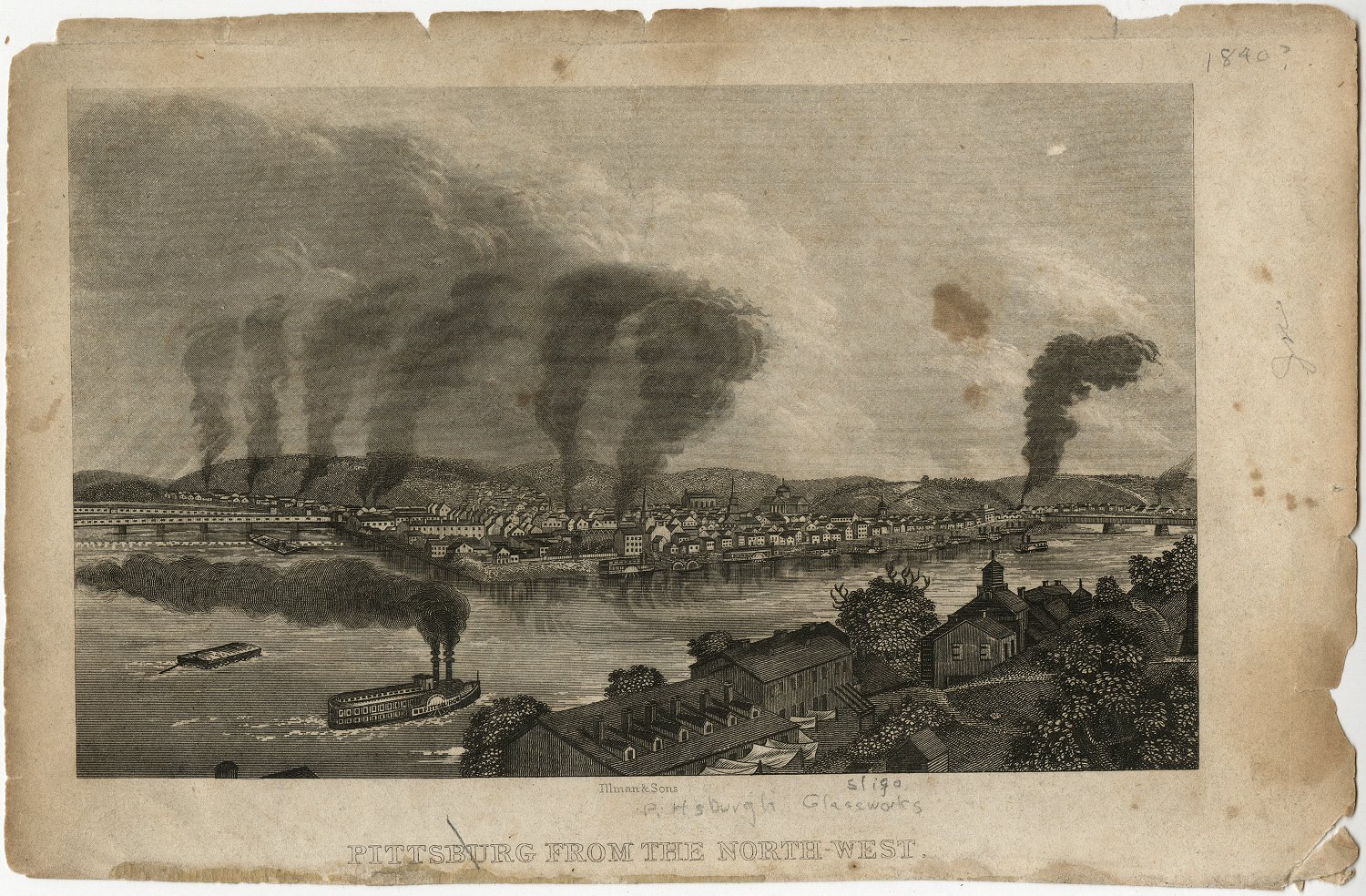 Pittsburg from the North-West by Sherman Day, 1847

From The Atlantic Monthly: A Magazine of Literature, Science, Art, and Politics January 1868:

"There is one evening scene in Pittsburg which no visitor should miss. Owing to the abruptness of the hill behind the town, there is a street along the edge of a bluff, from which you can look directly down upon all that part of the city which lies low, near the level of the rivers. On the evening of this dark day, we were conducted to the edge of the abyss, and looked over the iron railing upon the most striking spectacle we ever beheld. The entire space lying between the hills was filled with blackest smoke, from out of which the hidden chimneys sent forth tongues of flame, while from the depths of the abyss came up the noise of hundreds of steam-hammers. There would be moments when no flames were visible; but soon the wind would force the smoky curtains aside, and the whole black expanse would be dimly lighted with dull wreaths of fire. It is an unprofitable business, view-hunting; but if any one would enjoy a spectacle as striking as Niagara, he may do so by simply walking up a long hill to Cliff Street in Pittsburg, and looking over into -- hell with the lid taken off.” 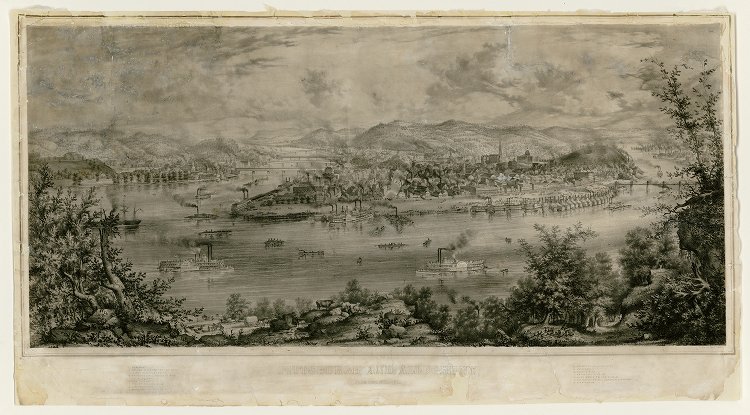 Pittsburgh and Allegheny from Coal Hill by Benjamin Franklin Smith, 1849

As quoted in the Pittsburgh Daily Post, Wednesday, December 31, 1884

"After our show, last night, we visited Mount Washington and took a bird’s eye view of your city by moonlight. With the moon soft and mellow floating in the heavens we sauntered about the mount, and looked down on the lake of fire and flame. It looked like a miniature hell with the lid off. It was a vision. A wonderful vision. It tended to frighten. The view is not as deliciously beautiful as one would suppose. If one can be calm and resolute, he can look upon the picture and still live. Otherwise, your city is a beauty." 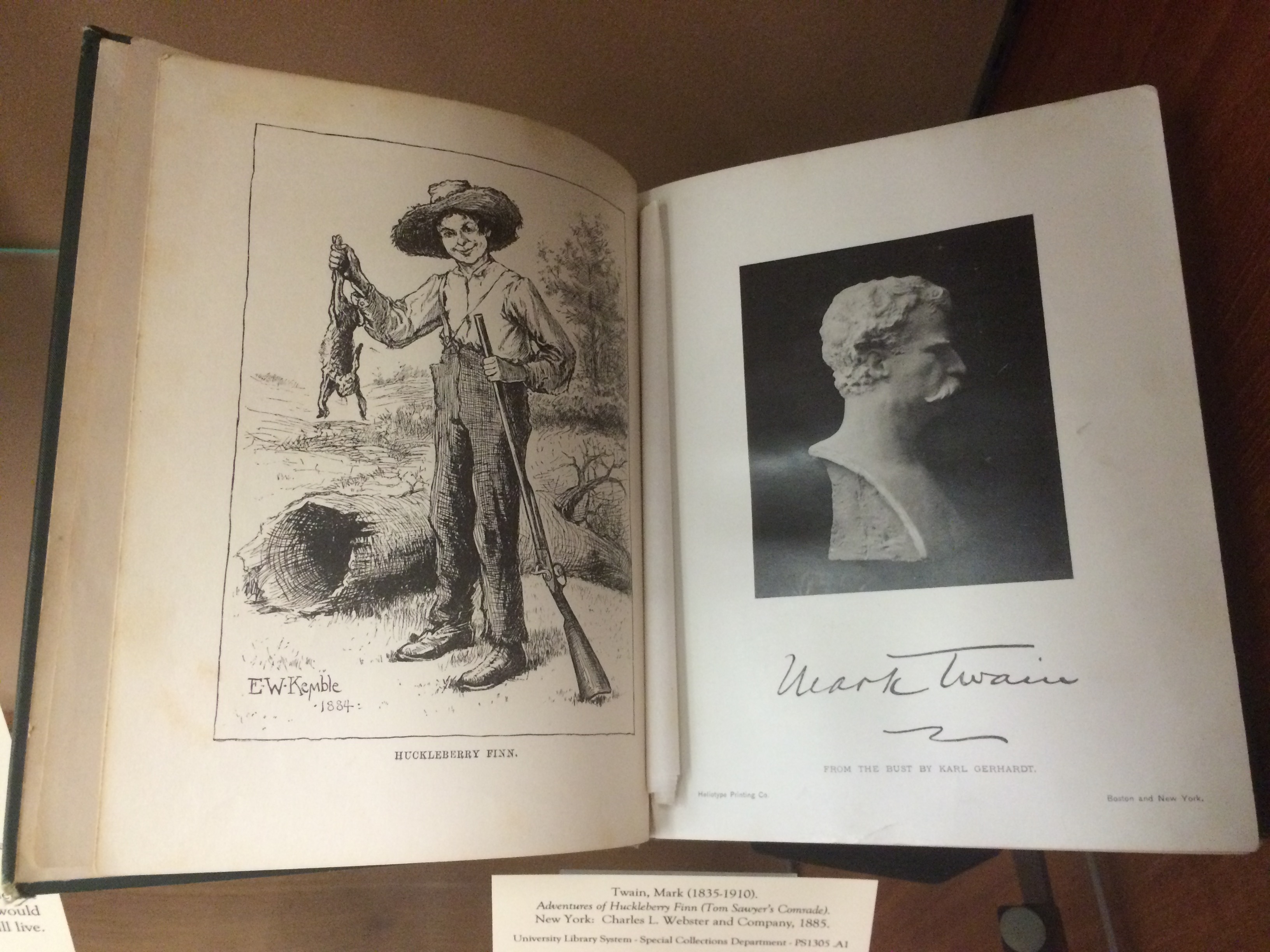 Frontispiece to the Adventures of Huckleberry Finn (Tom Sawyer’s Comrade), 1885.

Theodore Roosevelt was the 26th President of the United States of America. In addition to his political career he authored over two dozen books during his lifetime, several of which detail his worldwide travel and hunting expeditions. He visited Pittsburgh on July 26-27, 1917, as the guest of honor at the national convention of the Loyal Order of Moose of the World, a fraternal and service organization that was founded in 1888. His greeting was one of the largest receptions ever accorded to an honored guest in Pittsburgh, and he spoke of the city in a speech to the Chamber of Commerce:

“There is no more typical American city than Pittsburg. And Pittsburg, by its Americanism, gives a lesson to the entire United States. Pittsburg has not been built up by talking about it. Your tremendous concerns were built by men who actually did the work. You made Pittsburg ace high when it could have been deuce high. There is not a Pittsburg Man who did not earn his success through his deeds.”

A view of the first point Bridge, built in 1876-1877, from Mount Washington. The stiffened chain suspension bridge was designed by Edward Hemberl of the American Bridge Company. It connected Pittsburgh from the descending bank of the Monongahela River at Water Street to an area near the lower station of the Duquesne Incline on East Carson Street. A new bridge, designed by Stanley L. Roush, was constructed beside the original between 1925 and 1927. Upon the completion of the new bridge, the grand 1877 bridge was dismantled. By 1959, the new bridge would also be outgrown. 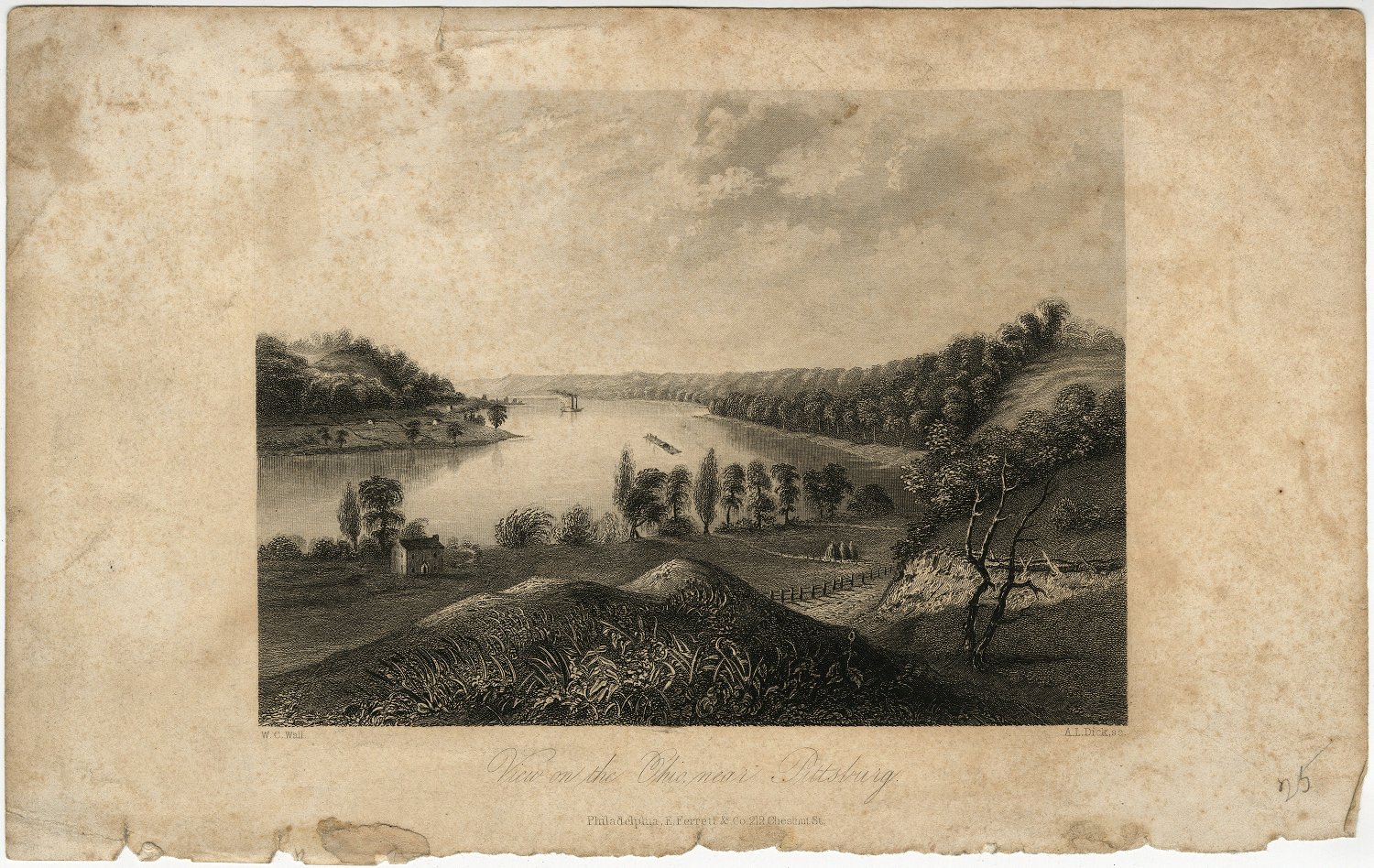 View on the Ohio, near Pittsburg 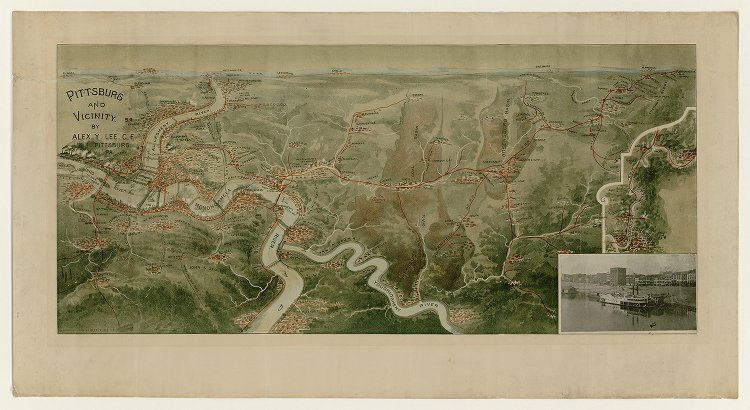 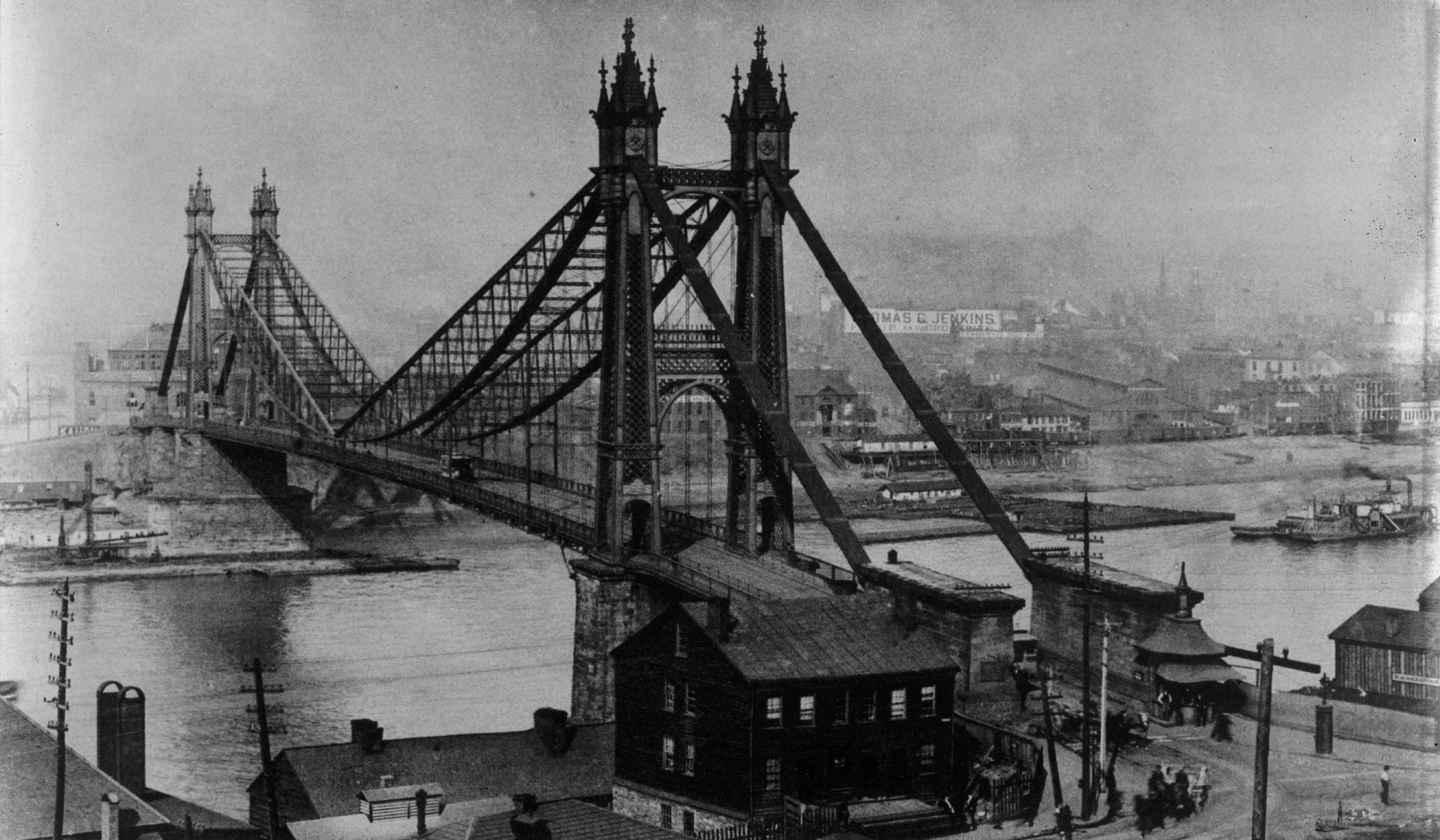