Perhaps surprisingly to many, Peter Pan did not get his start in this world as the free-spirited child who flew Wendy Darling to Neverland that we all know and love. Author Sir James Matthew Barrie, a Scottish novelist and playwright, had written several successful pieces before he became famous for creating Peter Pan. He moved to London, England as a young adult where he met the Davies boys. Peter Llewelyn Davies--later orphaned and adopted by Barrie, as well as the mischievous Greek god of the woodlands, served as the inspiration for the character that would captivate the English-reading world.  The first iteration of Peter Pan was a baby boy who had magical adventures in Kensington Gardens, the private gardens of Kensington Palace, the royal residence of the British monarch. This infant had his own chapter in Barrie’s 1902 novel The Little White Bird (alt. The Little White Bird, or Adventures in Kensington Gardens), a series of short chapters about the narrator’s day to day life in London and magical tales set in Kensington Gardens.

Peter Pan had his own dedicated chapters in The Little White Bird, which were softer in tone and are said to be the reason the novel became so wildly popular. In it, he is a seven-day old infant who, when he hears about the responsibilities of growing up, escapes out his window to play in Kensington Gardens. Then, because of the boy’s popularity, Barrie republished Peter Pan’s chapters from The Little White Bird in a separate book entitled Peter Pan in Kensington Gardens in 1906 and then wrote a novel based on his 1904 play entitled Peter and Wendy in 1911. In these versions, Peter is not specifically portrayed as an infant, but as a young child, and have become the most popular resources for the proceeding Peter Pan mythos. 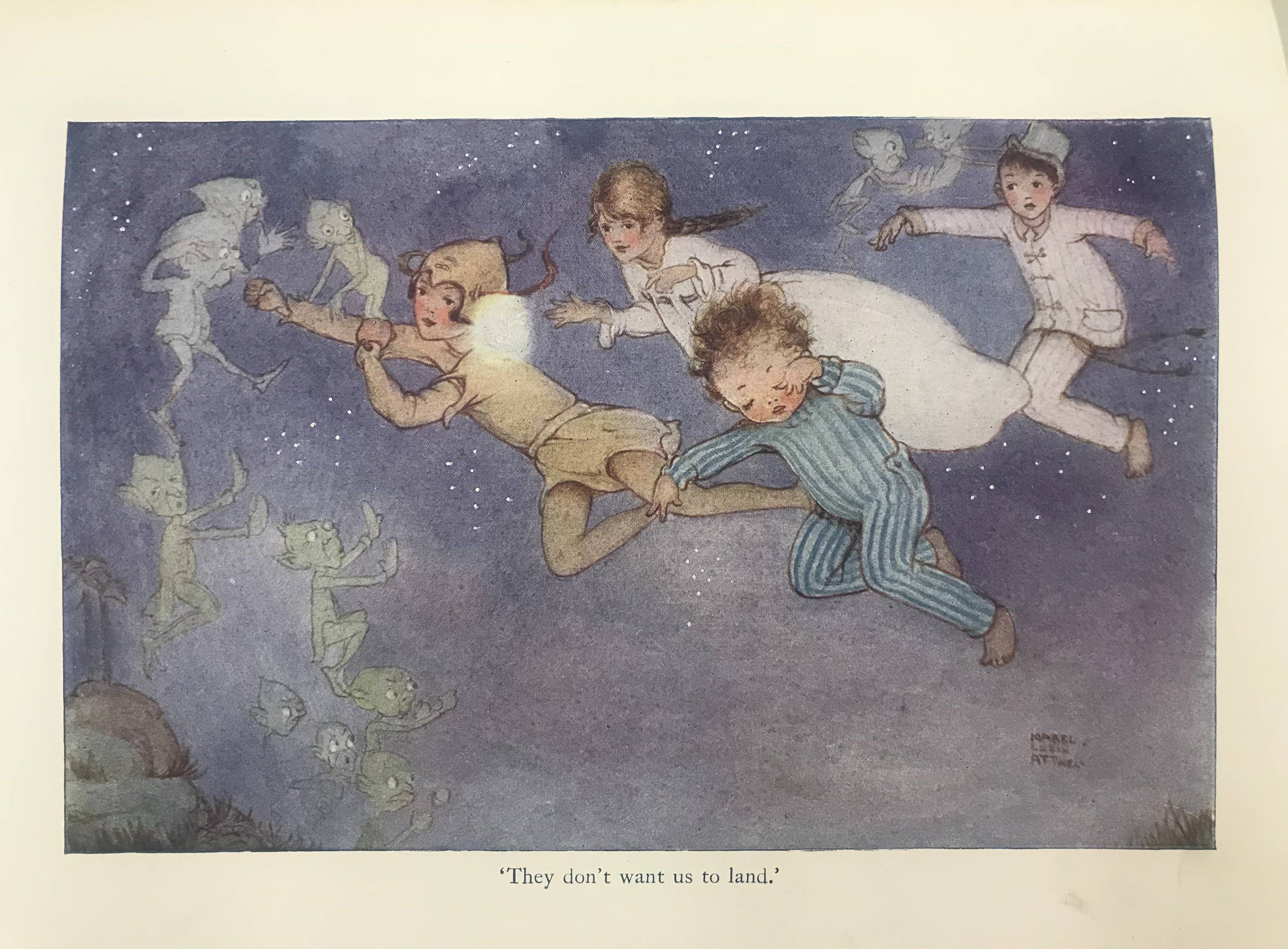 Illustration from Peter Pan and Wendy (1924) 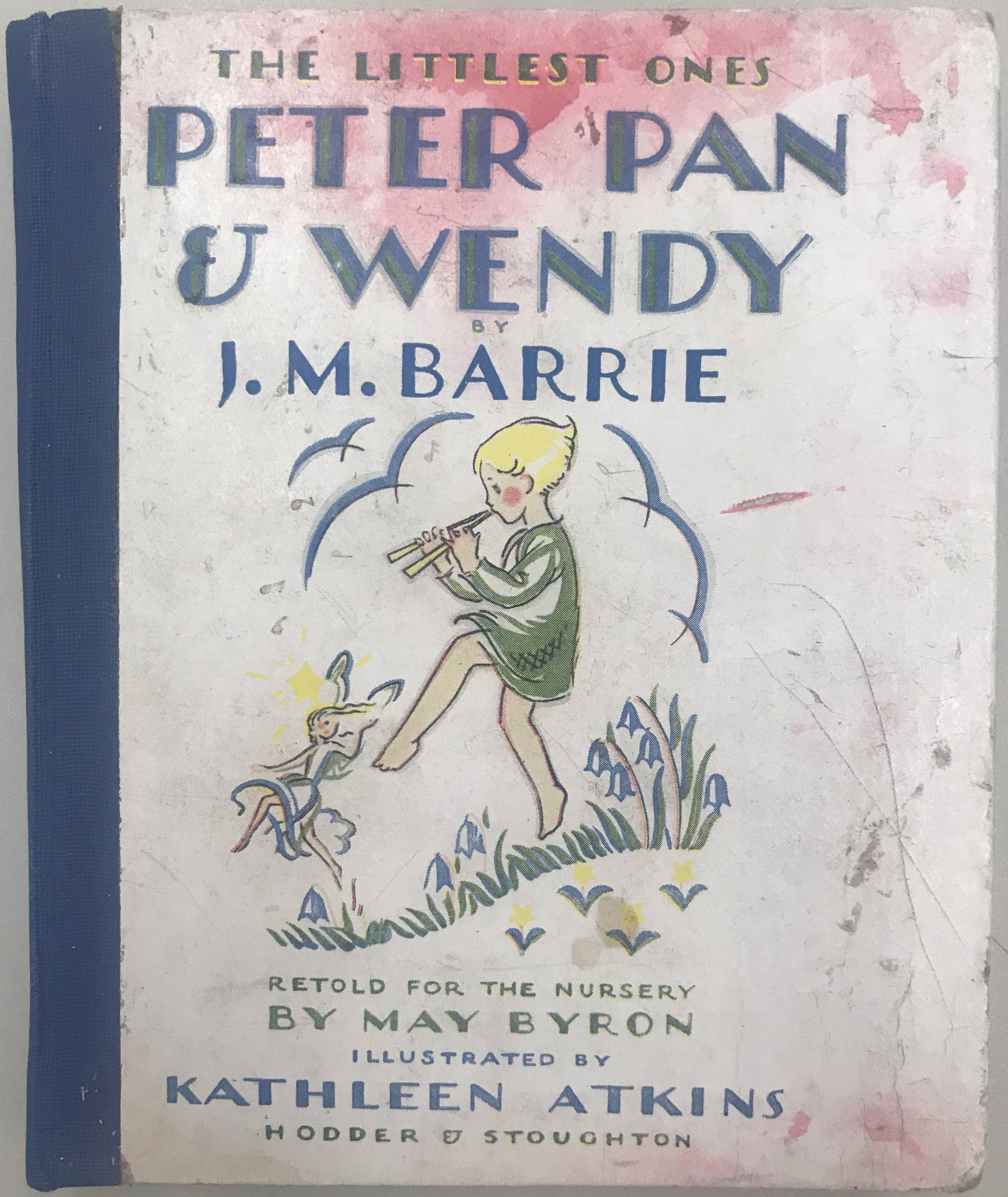 The Littlest Ones Peter Pan & Wendy

Retold for the Nursery by May Byron 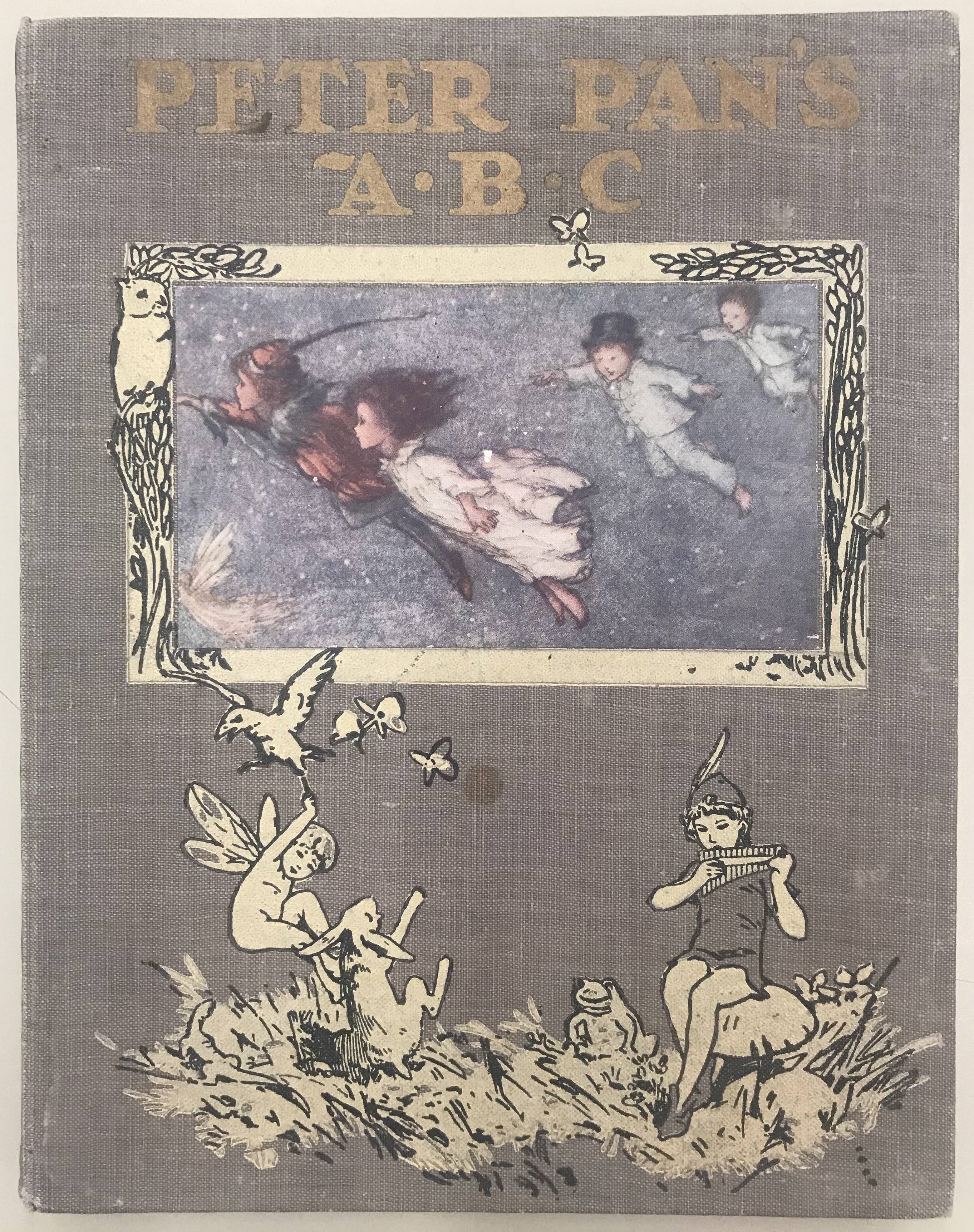 Illustrated in Colour by Flora White 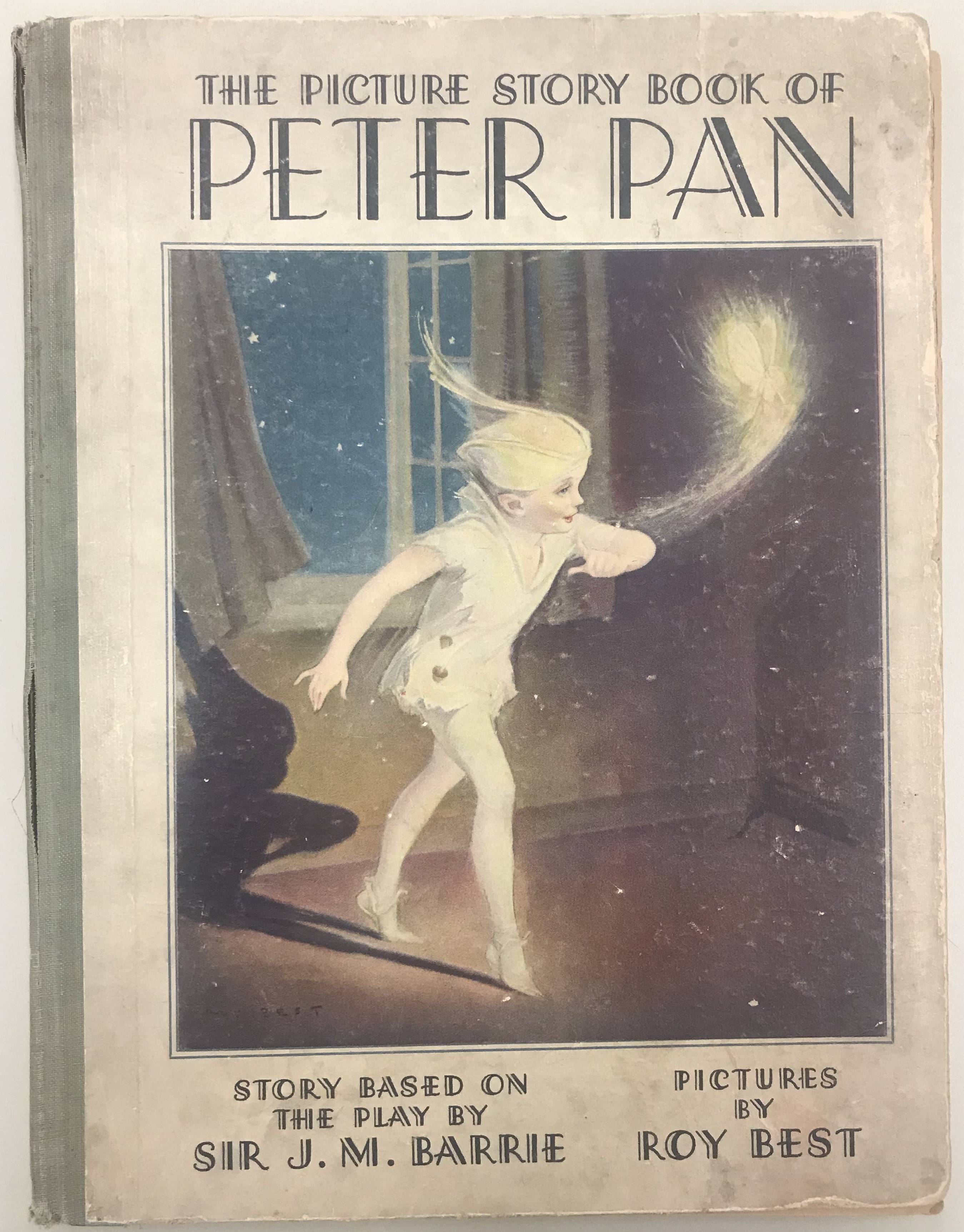 Story Based on the Play By Sir J.M. Barrie 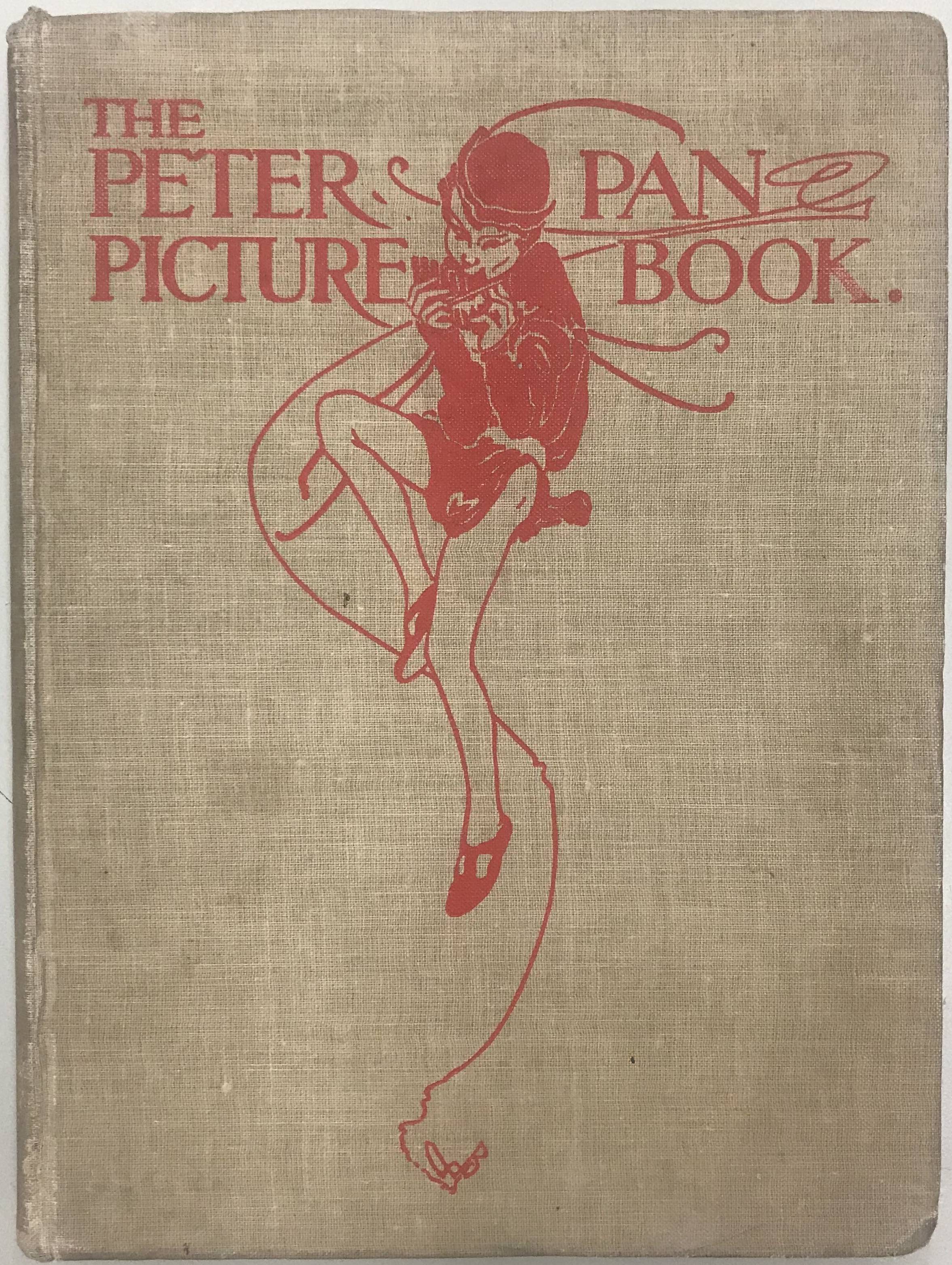 By Alice B. Woodward and Daniel O'Connor 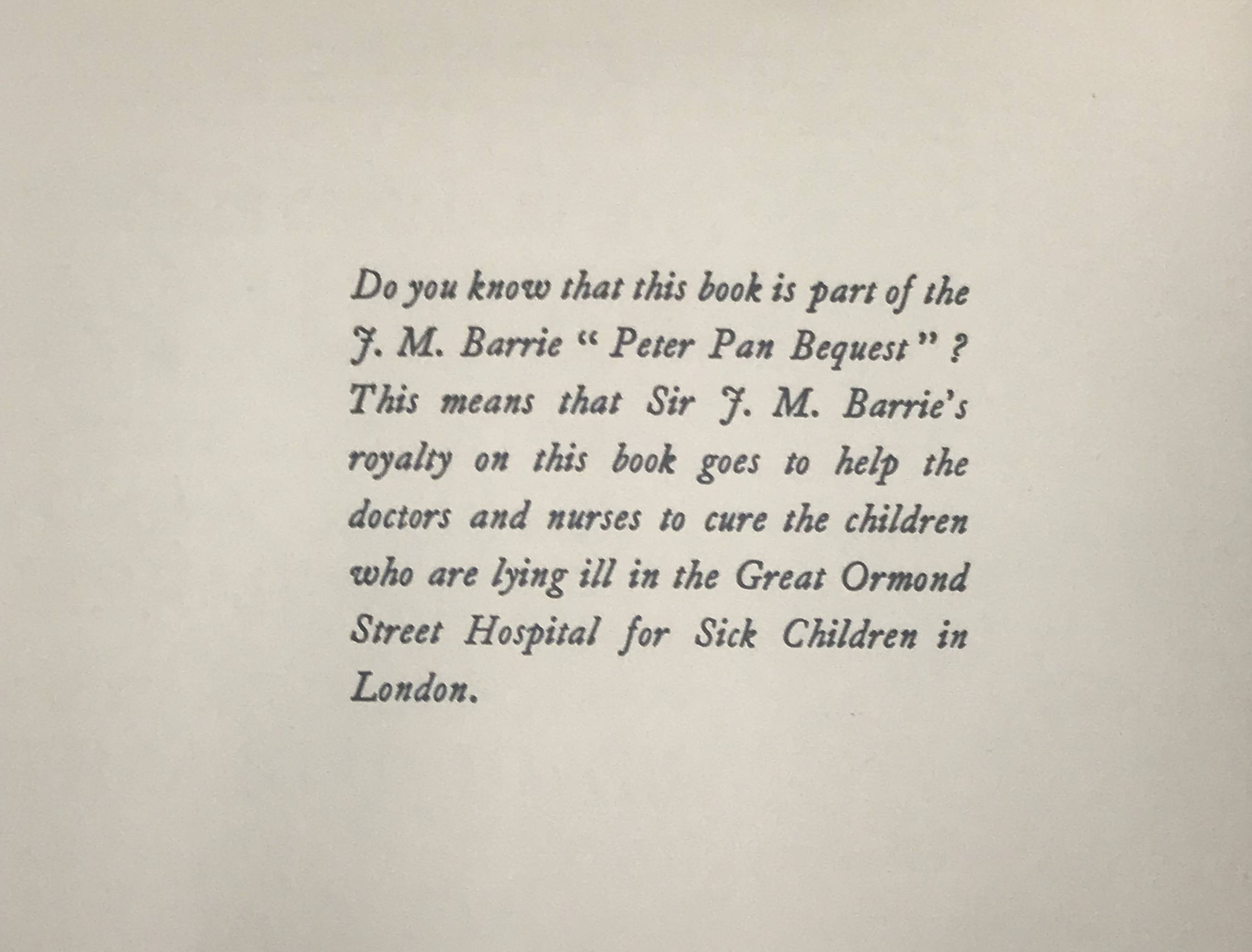 In 1927, Barrie generously designated the rights to Peter Pan to Britain’s Great Ormond Street Hospital, a bequest that was confirmed after his death in 1937. For years, every Peter Pan-related production—whether a book, movie, musical or TV show—earned money for the children’s hospital. This is a sample blurb that would appear in these books from the Blampied Edition of Peter Pan. 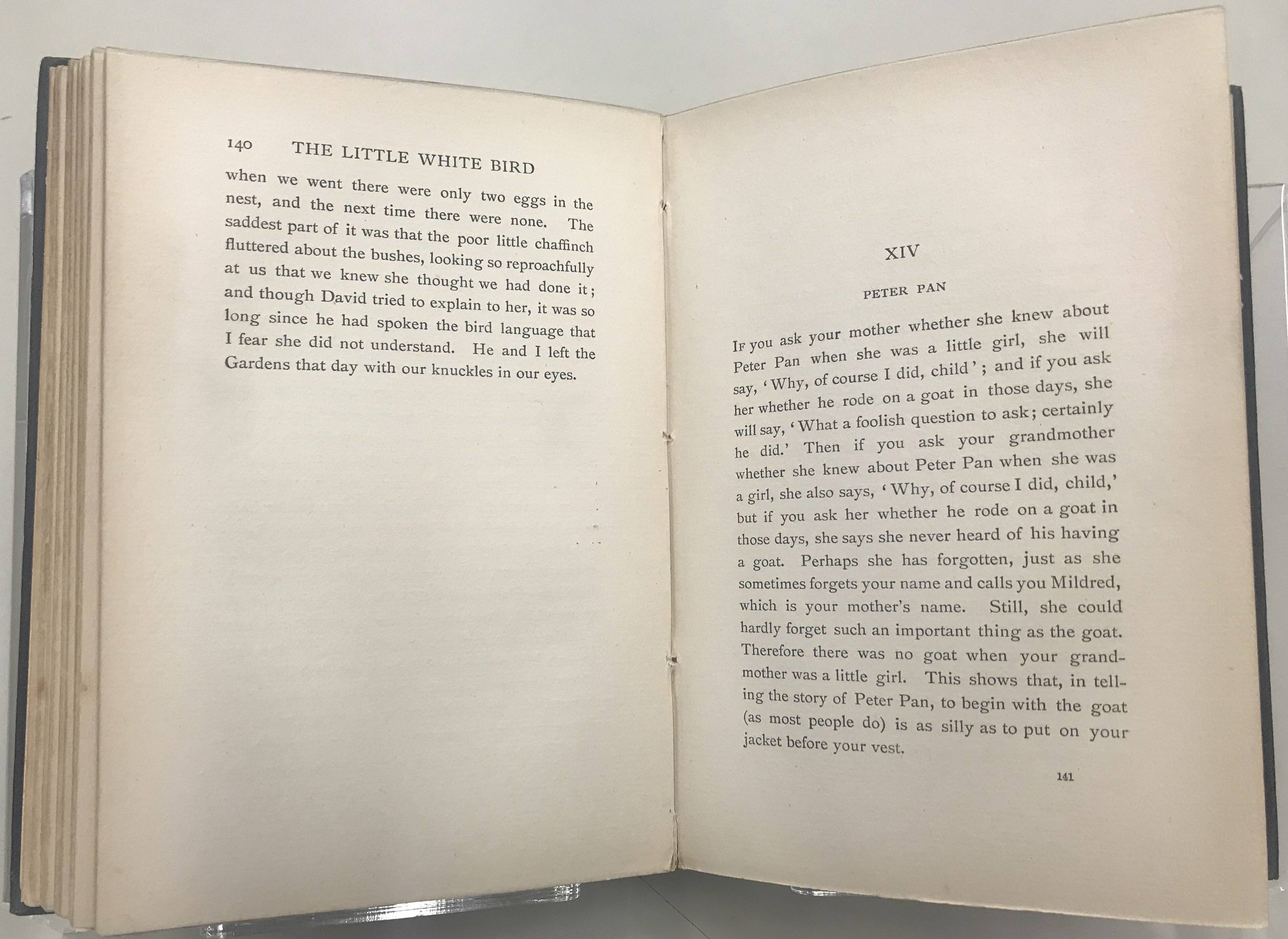 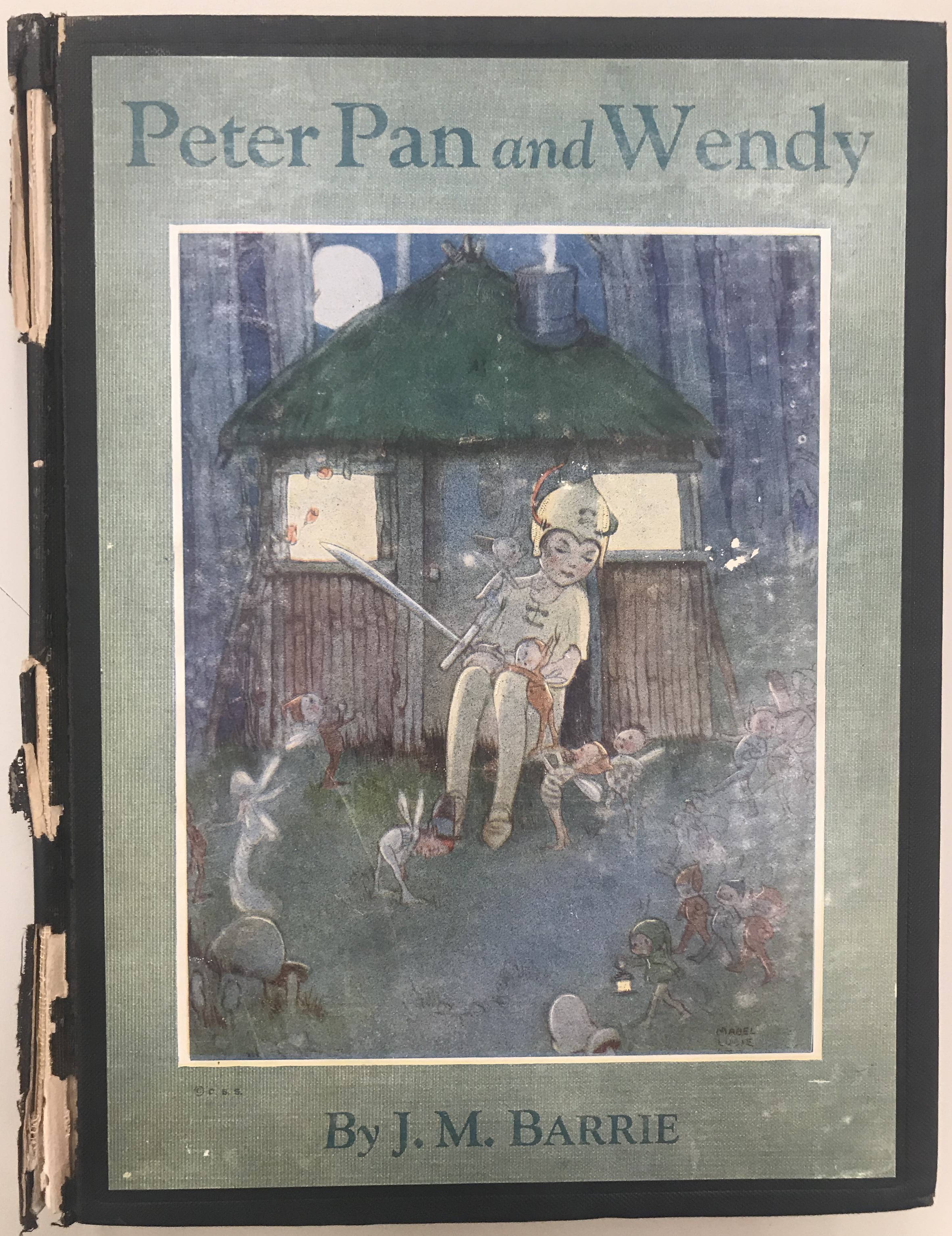 New edition of Peter Pan and Wendy, published in 1926

Peter Pan for the Stage

Following the success of the character, Barrie wrote a stage play entitled Peter Pan, or The Boy Who Wouldn’t Grow Up (alt. Peter Pan and Wendy) which premiered in 1904 in London. 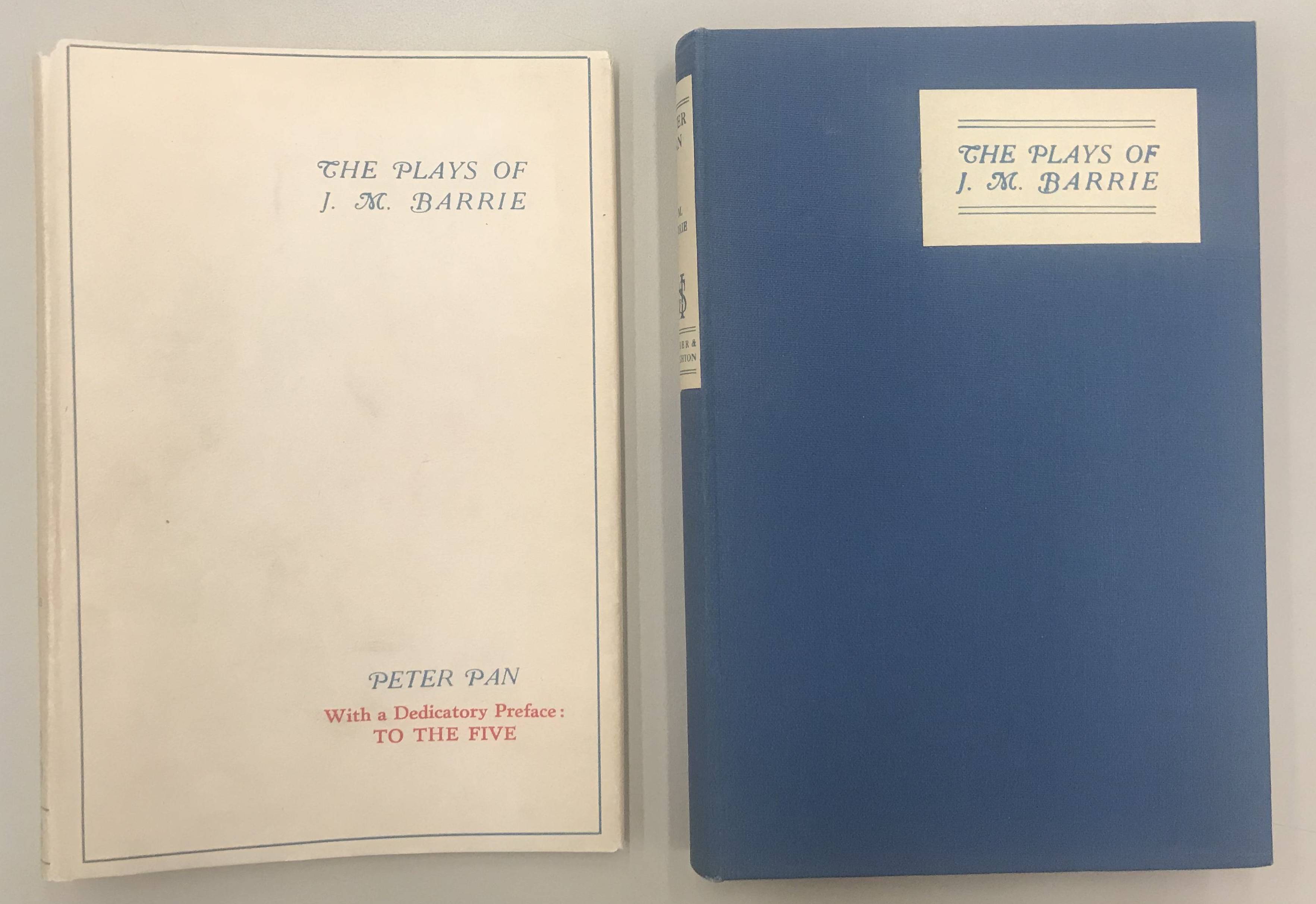 Peter Pan, or, the Boy Who Would Not Grow Up (1928 version), shown with dust jacket

About the Page Creator

Sarah LaBouliere is a rising senior at the University of Pittsburgh and she is double majoring in English Literature and Communication with a minor in Theatre Arts. She earned an Archival Scholars Research Award (ASRA) during her Junior Year in the Spring of 2017 and her project is entitled "Analyzing, Describing, and Seeing the Physical Book: A Study in Children's Literature". Using descriptive bibliography (the close study of the physical book) she analyzed and compared different versions of three well-known children's stories; Peter Pan, Alice in Wonderland, and Robinson Crusoe. Shown here are some of the titles she inspected during her work with Peter Pan.