In the late 19th Century, the role of the child was quickly changing in the face of an industrialized society. As laws banning child labor became more prevalent, children began to transition from the category of "little adults" to a specialized place in society as "the child"--an entity to be revered, protected, and cherished. It was during this time that a new niche market of toys and books were marketed specifically for children, as childhood was increasingly seen as a time of leisure, play, and discovery. The creation of educational and entertaining juvenile periodicals also began to emerge, gaining popularity with younger crowds and approval from parents who appreciated the instructional and moral content of such magazines.

Children were encouraged to be curious spectators, but sometimes they were even asked to participate by sending in letters, riddles, and poems to the editors. Children were often expected to write about the natural world and animals and imitate the style and form of adult authors. There were also many guidelines that limited content, length, and required adult endorsements to ensure that the child's voice was consistent with the editor's wishes. As a result, the voice of the child author was constructed in between the pages of different magazines and helped set the tone for what a child should look and sound like. Many critics argue that, in fact, it is not the real child that appears in these pages but a child performing the part of an "ideal" child and, in such a way, perpetuating the construction of the child as innocent, natural, desexualized beings, wholly distinct from adults.

Begun in 1877, The St Nicholas League, a reoccurring monthly series, invited child readers to send in poems, prose, drawings, and photographs each month with the chance to be featured in between the periodical’s pages. Many children who were published would go on to have prolific careers—such as F. Scott Fitzgerald, William Faulkner, and Rachel L. Carson. The League was a distinguishing feature of St. Nicholas and well-loved by their readers. For many children, it was often the first section to which they would flip. With a motto of “live to learn and learn to live,” St. Nicholas strove to satisfy more than a children’s thirst to read—they inspired them to create. 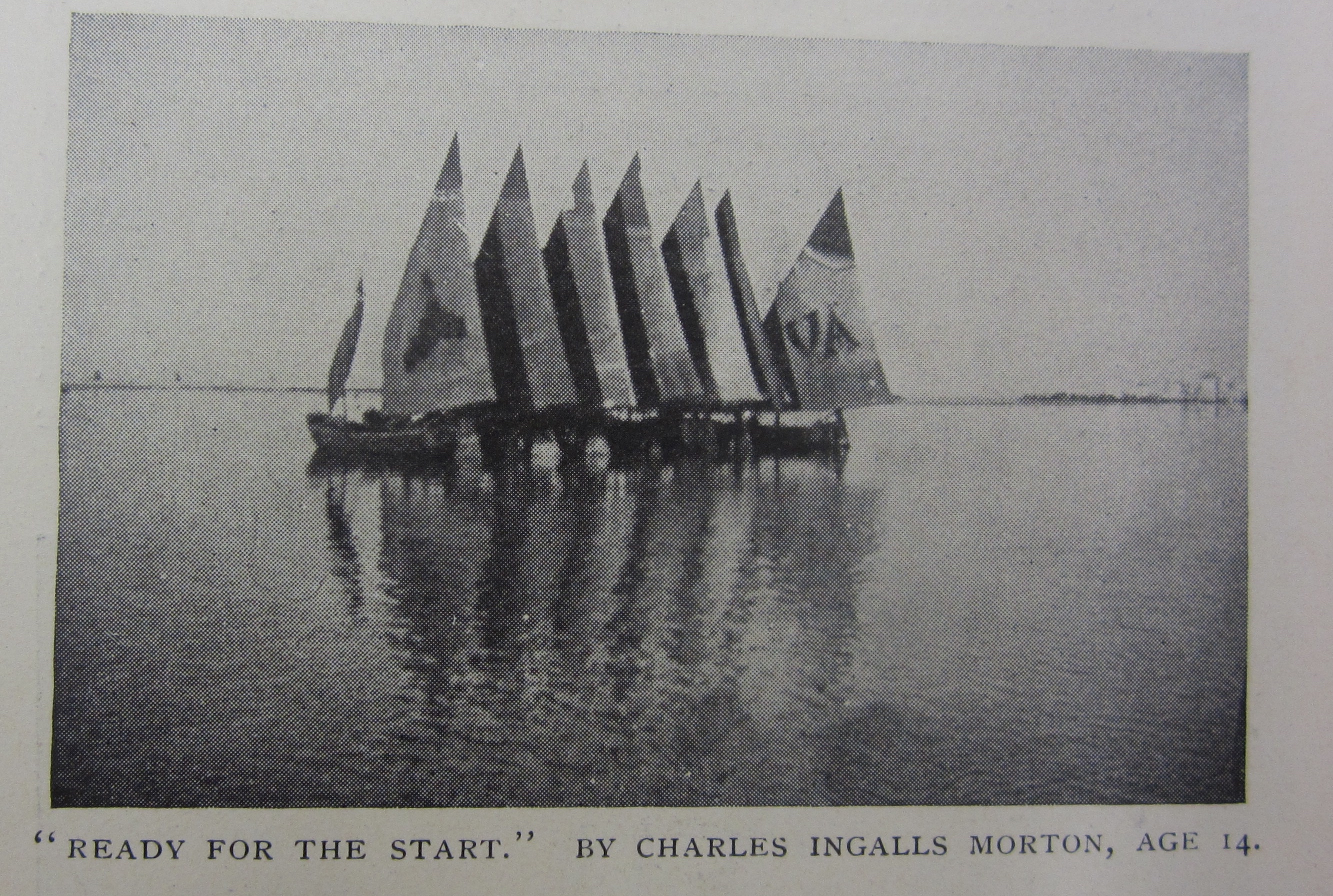 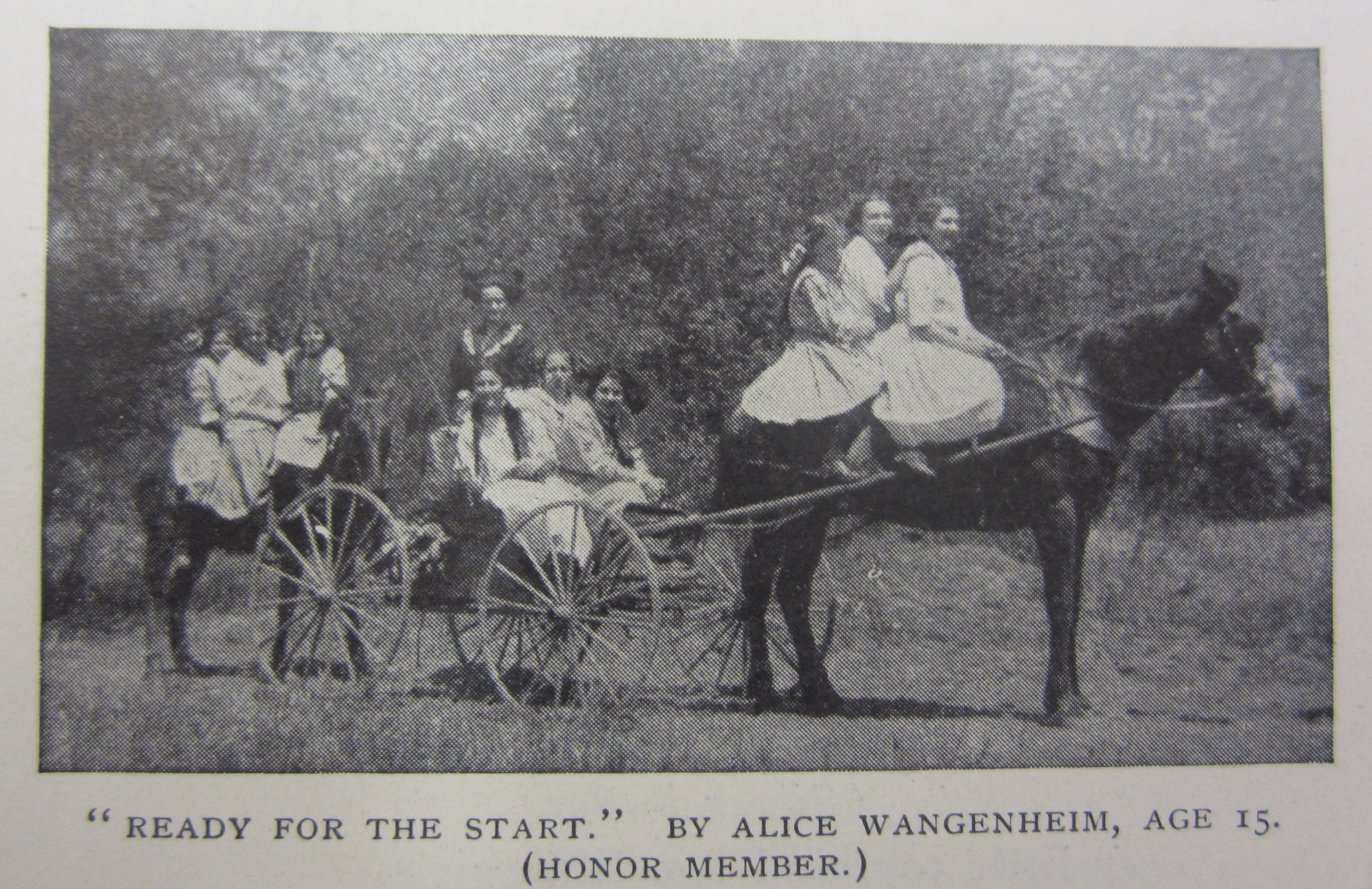 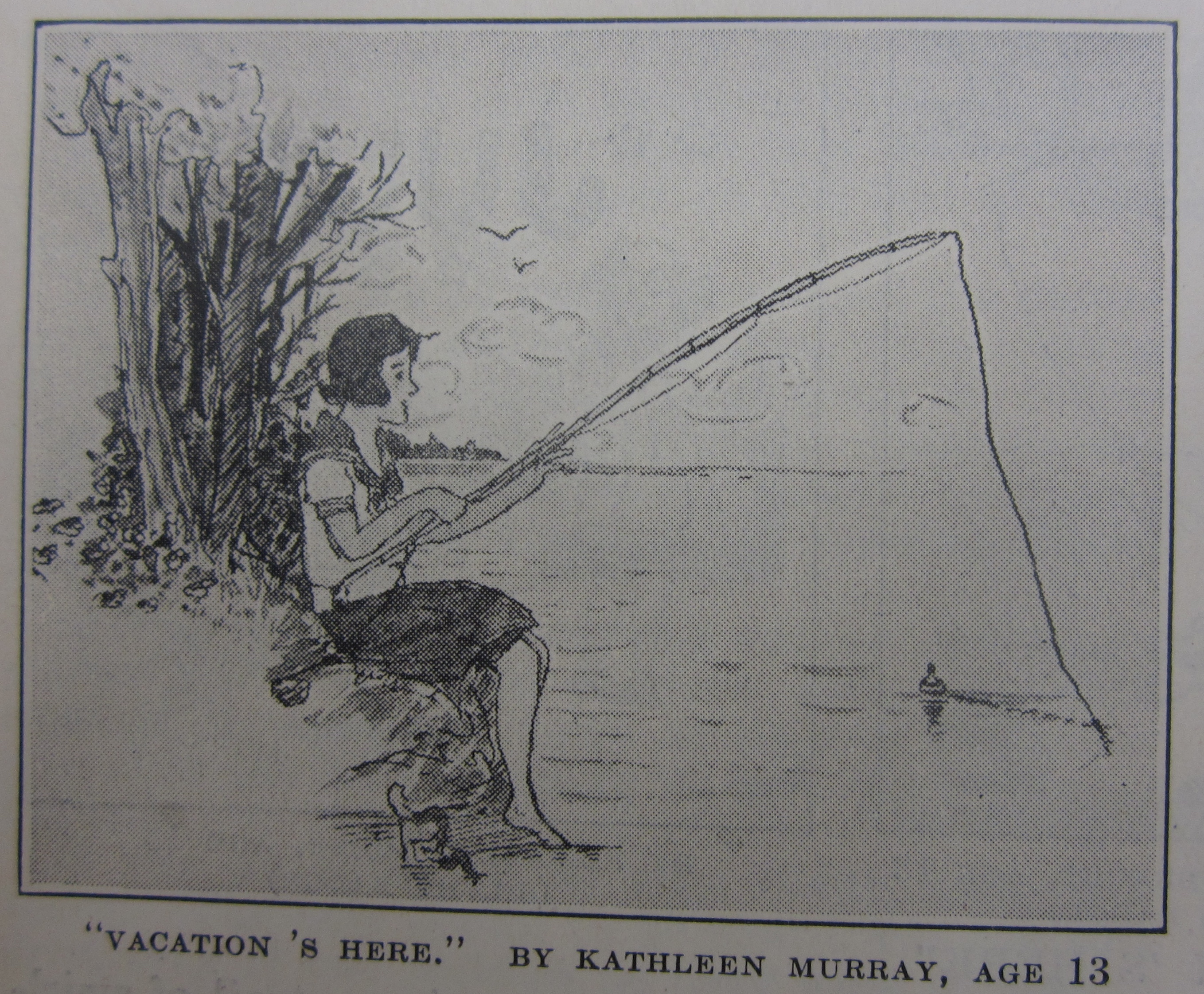 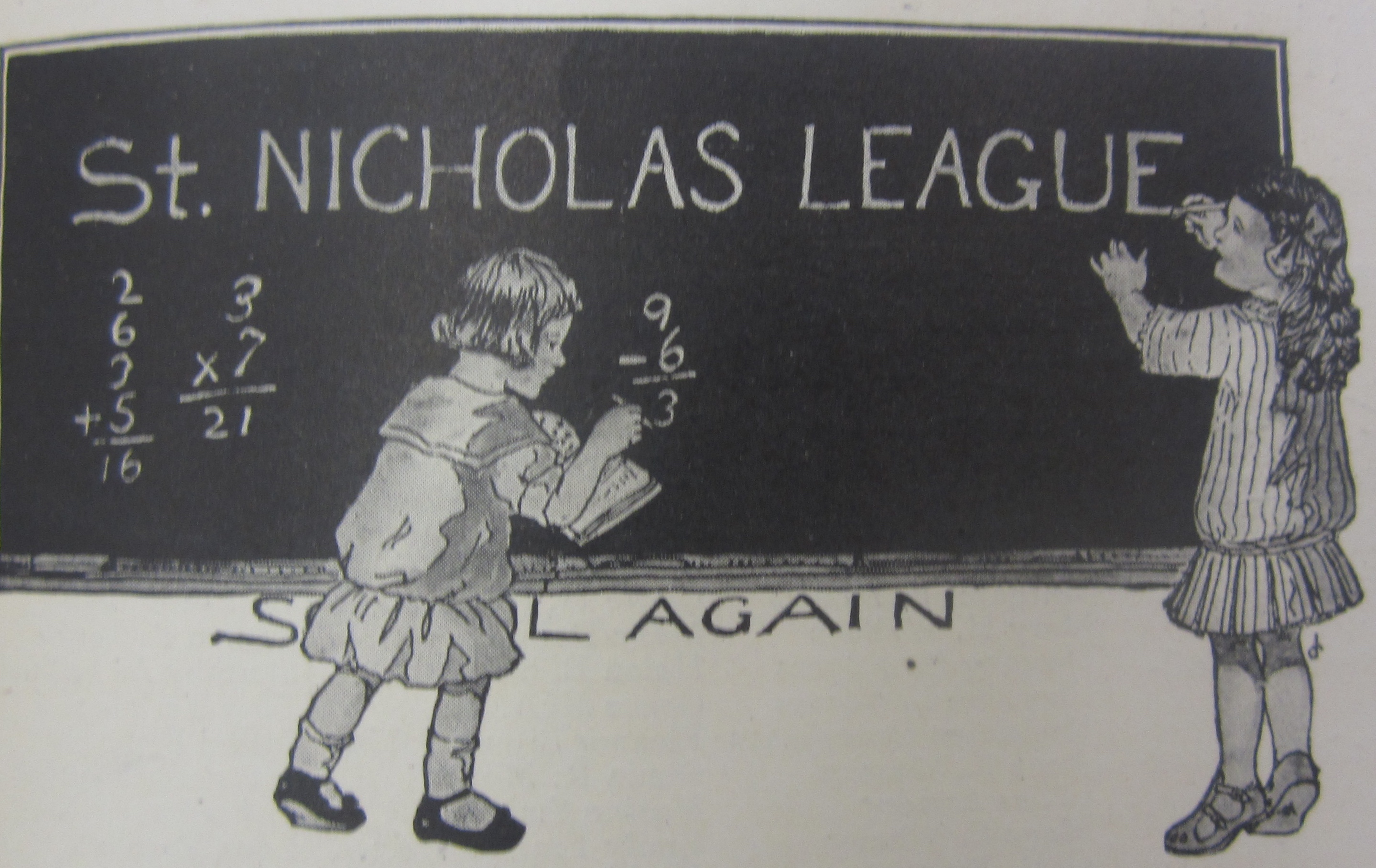 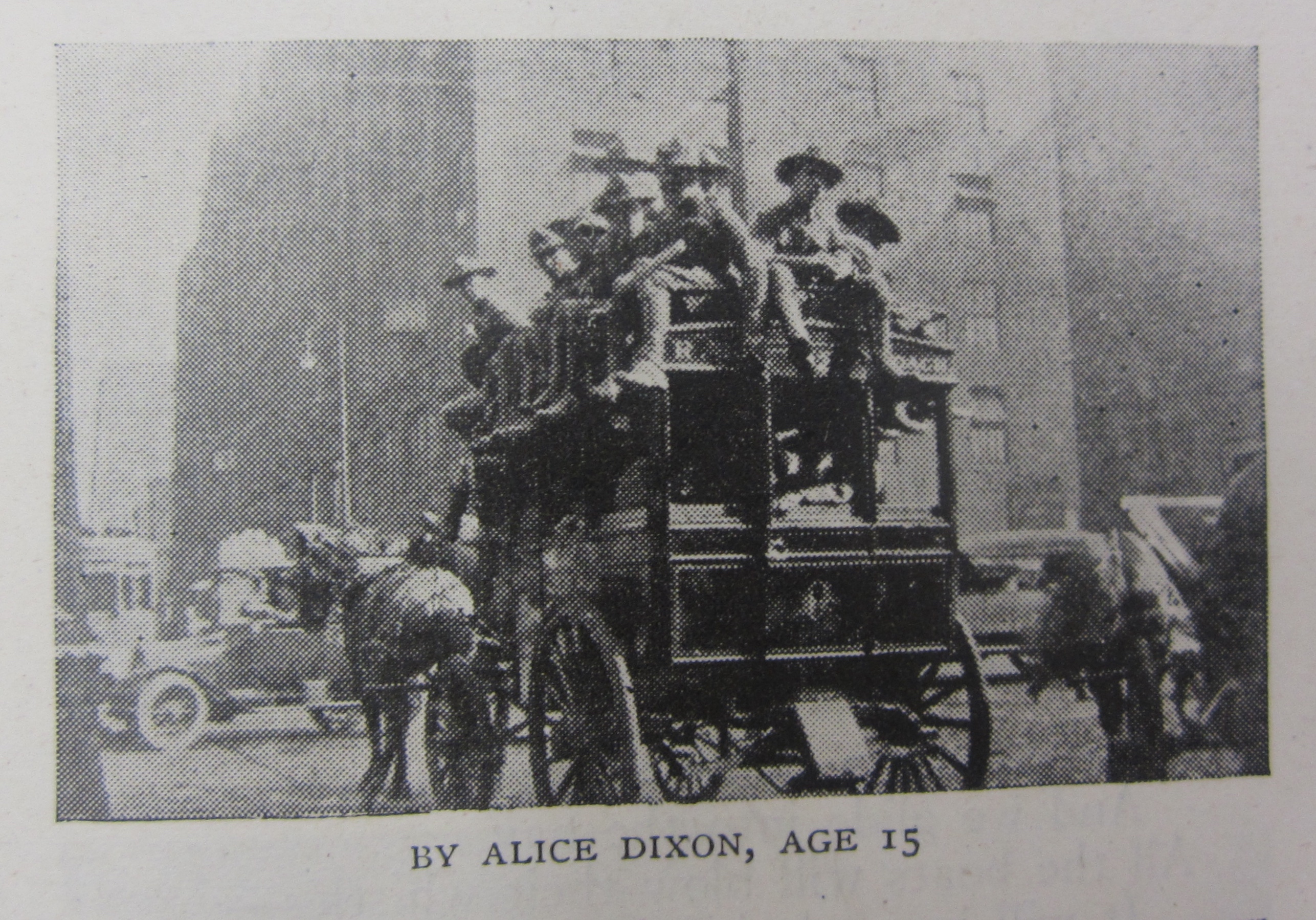 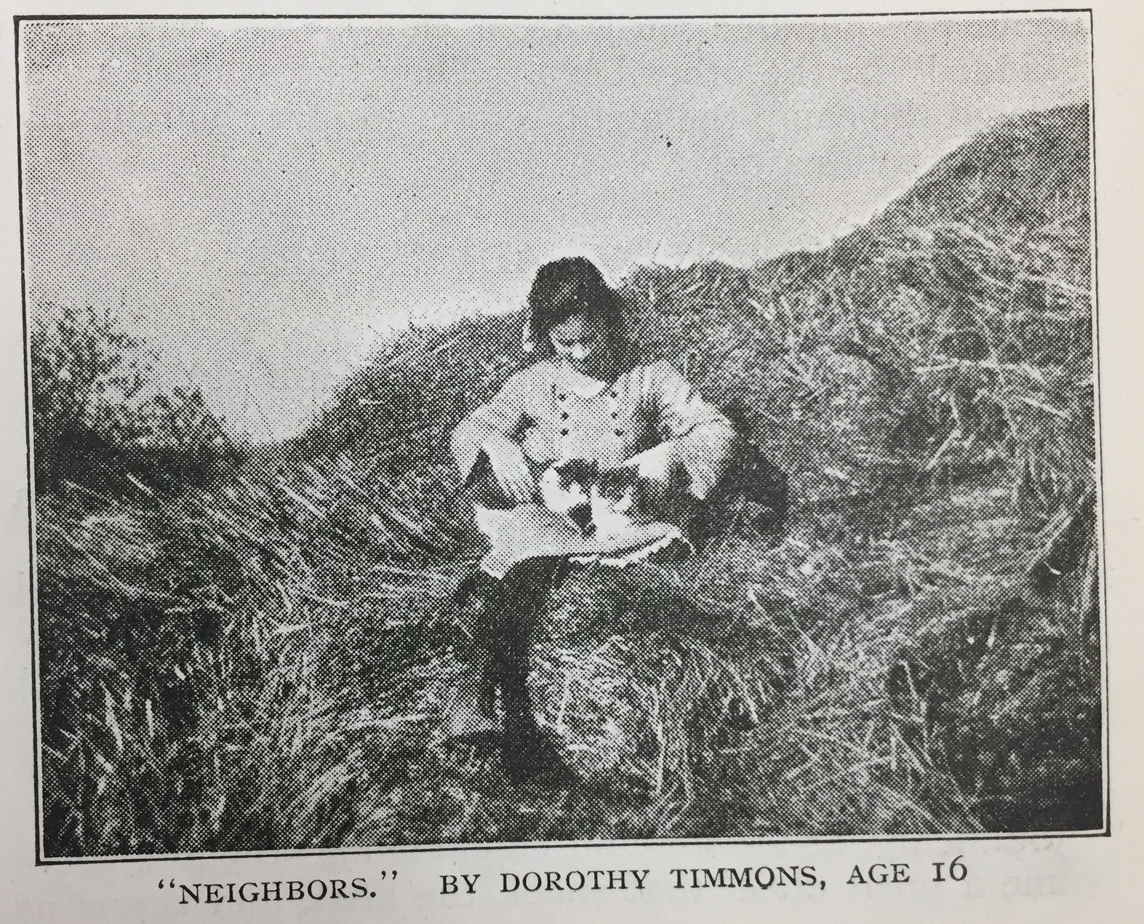 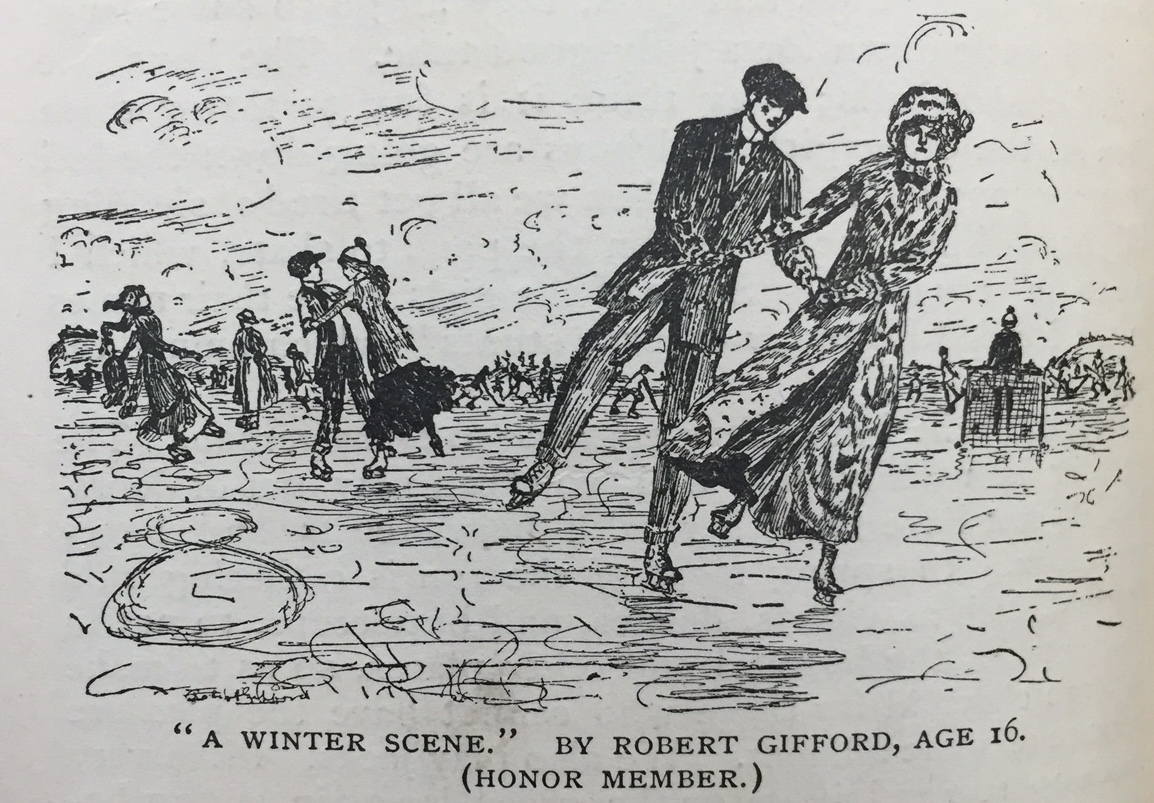 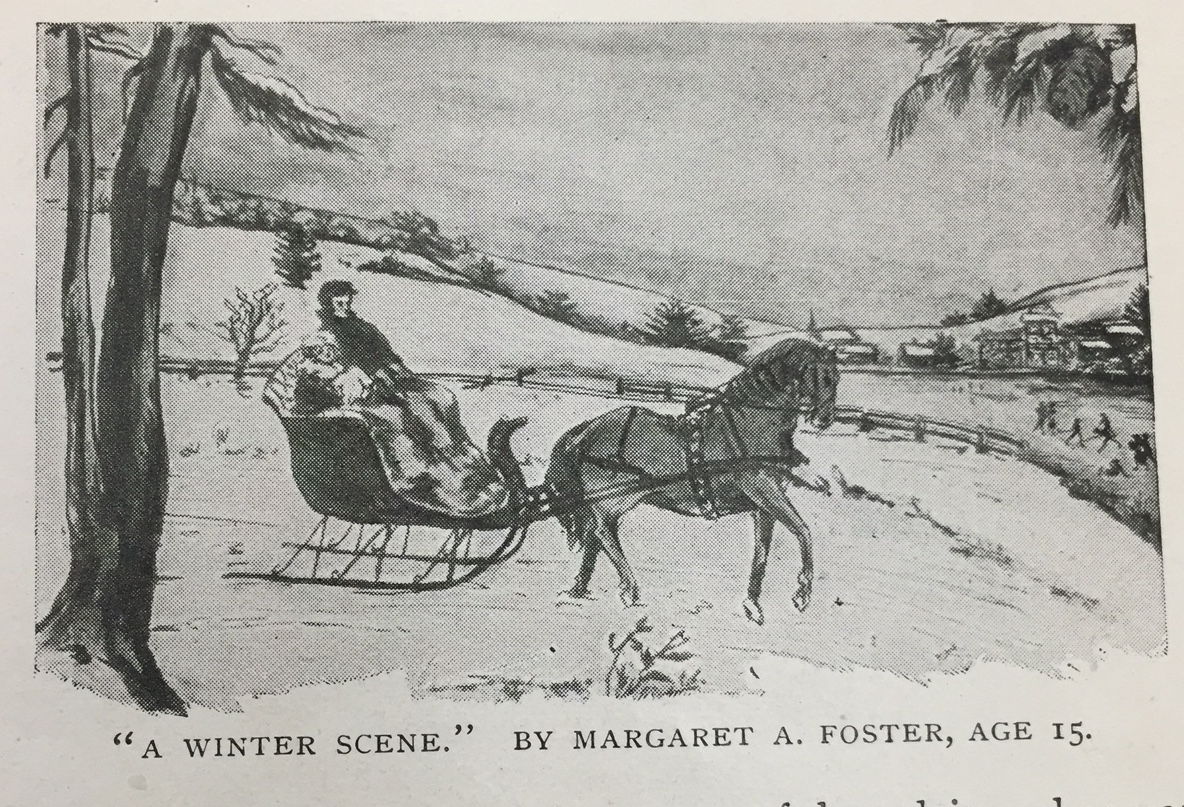 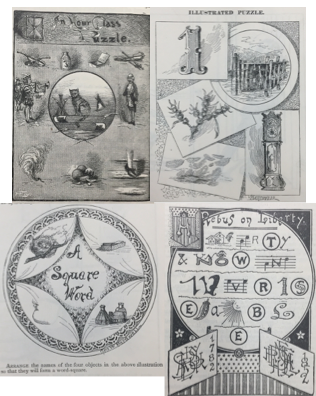 In the Riddle-Box column, children created riddles that were both fun and educational. Clues tested general knowledge, such as a word for "the juice of plants" or asked children to "transpose a word meaning parsimonious, and have a word meaning diminishes little by little." Especially talented children sent in illustrated enigma's, a sampling are shown here: 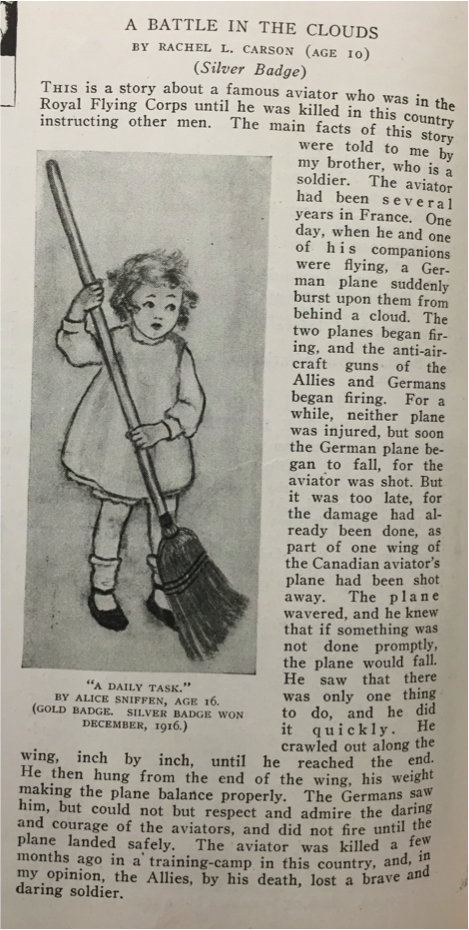 A short story by Rachel E. Carson, champion of environmental rights and author of Silent Spring--which led to a nation wide ban on DDT and the formation of the Environmental Protection Association. 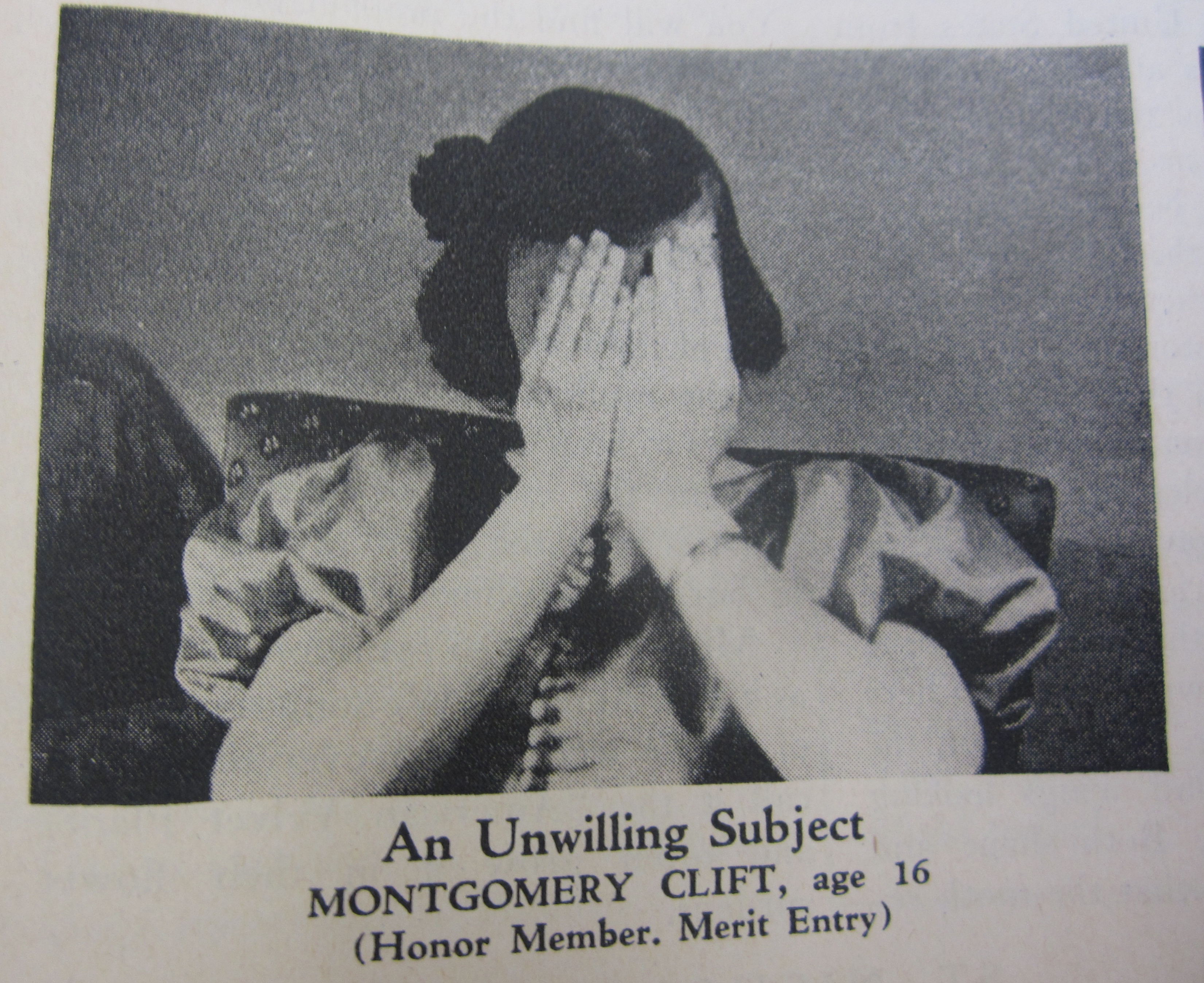 Photograph by Montgomery Clift, a film and stage actor who received four Academy Award nominations in his career. 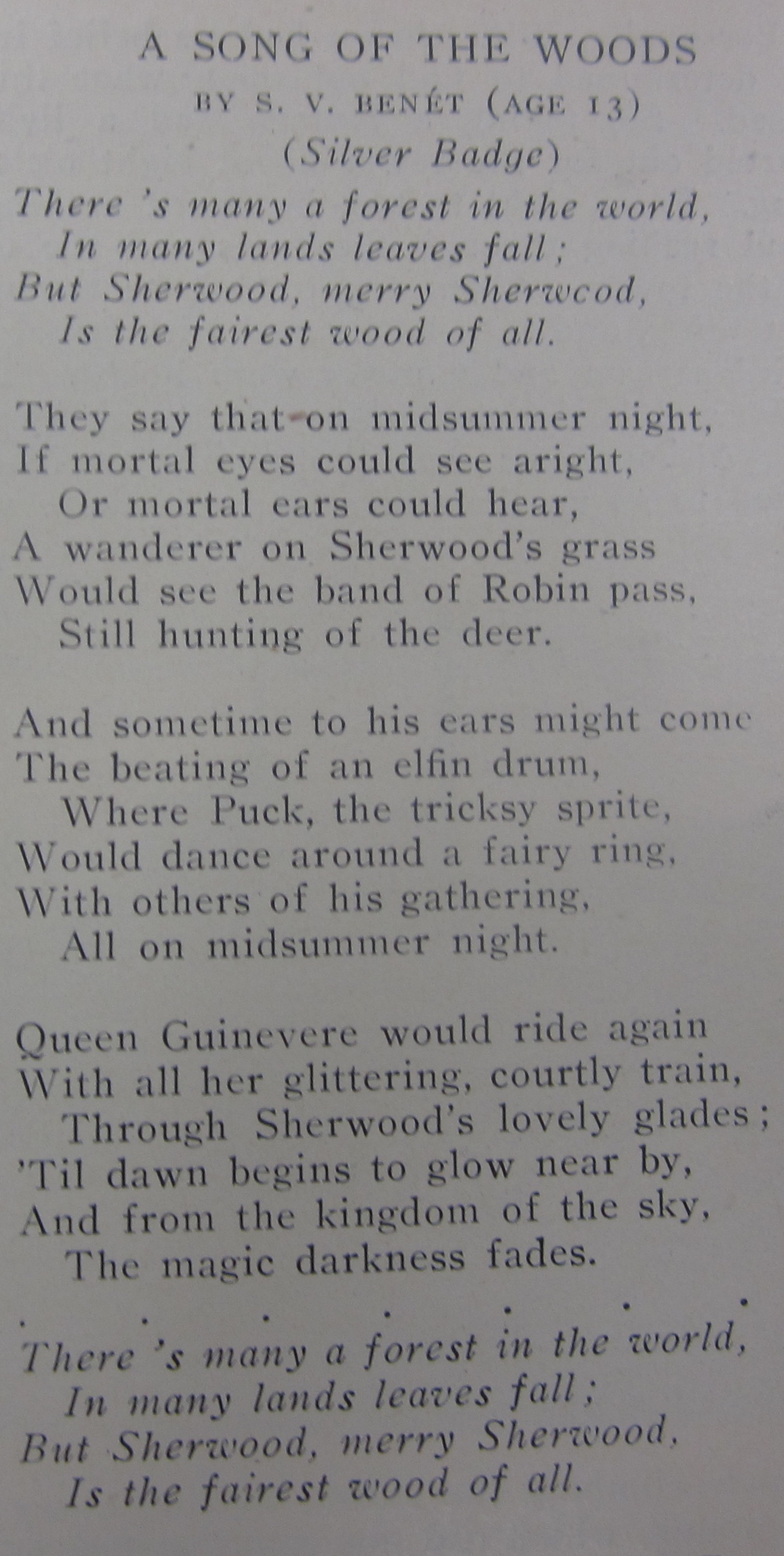 A poem by Stephen Vincent Benet, an author best known for his work John Brown’s Body, for which he received the Pulitzer prize in 1929 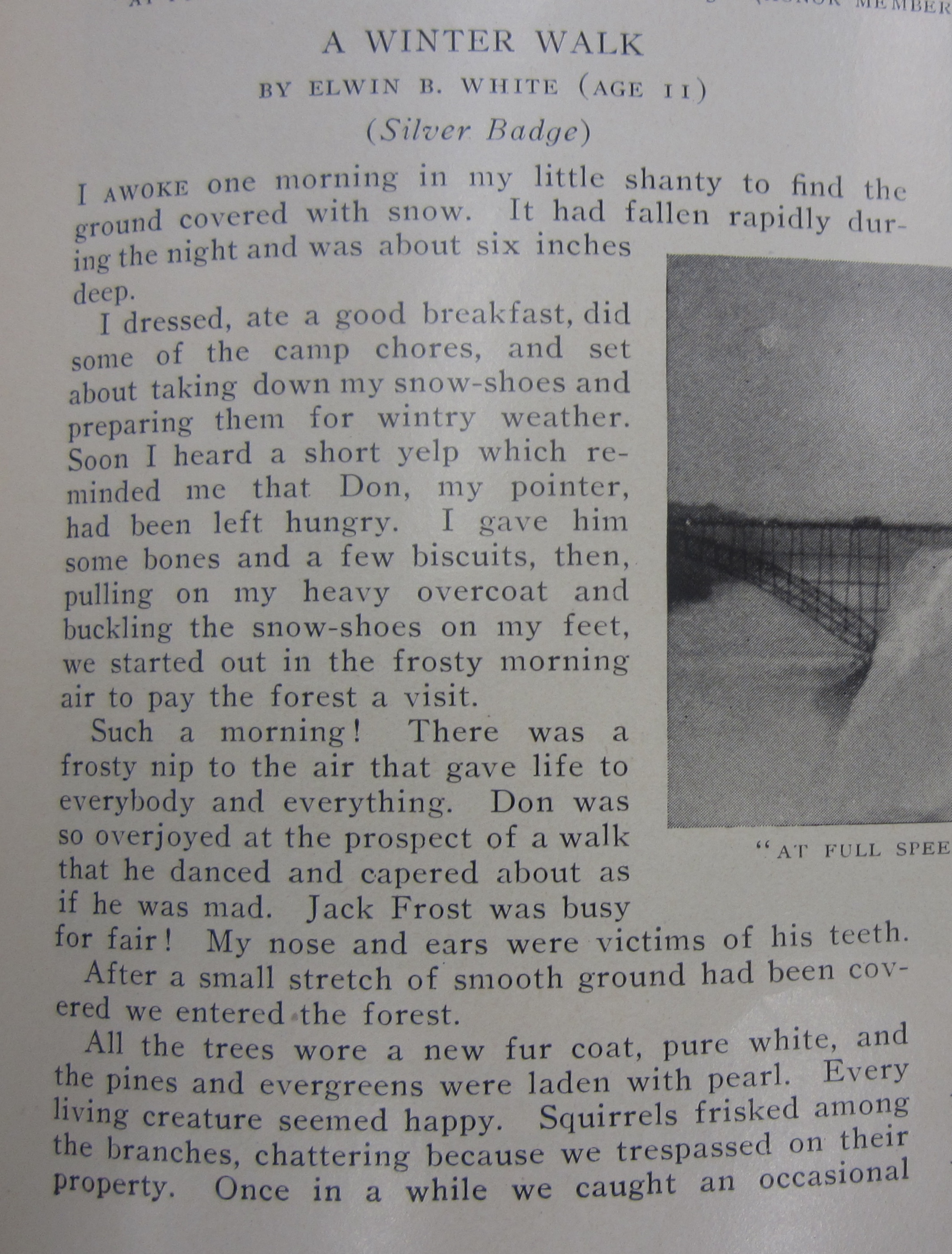 A short story by author E.B. White, who would go on to write child-favorites such as Charlotte’s Web and Stuart Little. 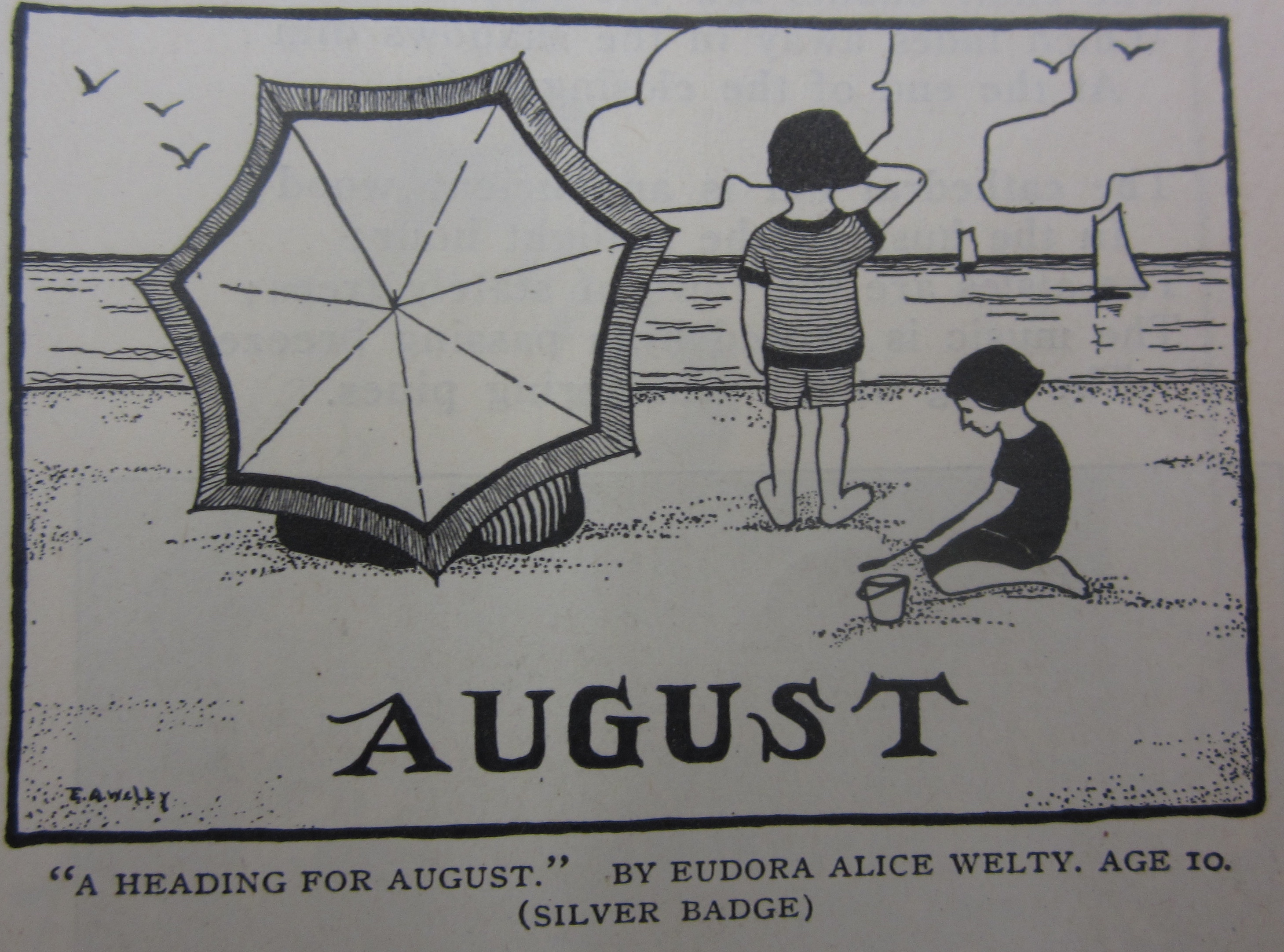 A drawing by Eudora Alice Welty, a Pulitzer prize winning author most famous for her novel The Optimist’s Daughter. She was awarded the Presidential Medal of Freedom by Jimmy Carter in 1980. 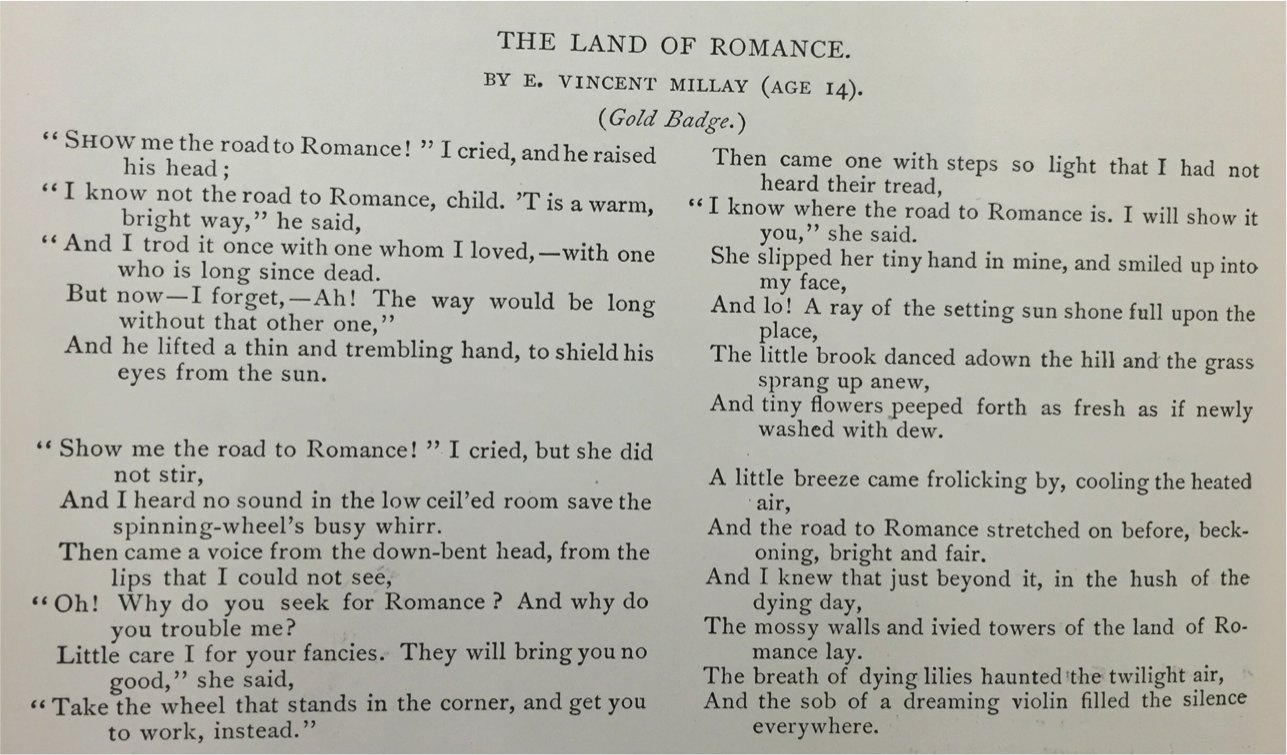 A poem by Edna Vincent Milay at age 14. Millay was the most decorated author in The League, publishing seven poems during this time period. She went on to win the Pulitzer Prize for poetry in 1923. 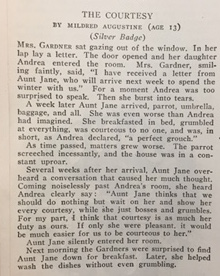 A short story by Mildred Augustine—better known by her pen name Carolyn Keene—was a ghostwriter for the Nancy Drew Series, writing 23 of the 30 original books. 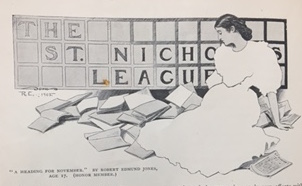 A Drawing by Robert Edmond Jones, an American scenic, lighting, and costume designer who's work, The Dramatic Imagination is widely considered one of the defining pieces on modern stage design.

Want More? Check out this compliation of notable works from the St. Nicholas League. There are volume numbers and page numbers if you want to see them up close or explore on your own.

In the popular magazine, Robert's Merry Museum, children's voices were featured every month in the section entitled Merry's Monthly Chat with Friends. Robert Merry became the first editor to feature a letter column by children, and it became a convention adopted by many juvenile periodicals, including St. Nicholas. These letter-box columns were created to allow children a space in which they could converse with the editor and, sometimes, other children. Here are a few letters written by children:

We have taken you quite a while. We live in Sendai, but will move to a town in the mountains name Wakamatsu, which in Japanese means "young pines," from waki, young, and matsu, pines. Within half a mile away from our new home will be a castle in ruins. In 1868, this was the center of a revolution against the emperor. A company of nineteen boys, called Byakkotai," which means "White Tiger Company," alone opposed him in the end of the war. The mikado's soldiers planted cannon on the near-by mountains, and soon the castle was in flames. The nineteen boys, when they saw that all was lost, went to a hill and committed suicide. One of the boys was found by a peasant woman and lived. He is our next-door neighbor now. I will stop, or my letter will be too long.

I am a girl thirteen years of age, and have lived in Indian with my mother and father for ten years. My mother, brother, sister, and myself came to America, and we were passengers on the Titanic...I am going to tell you about our journey home, and about the Titanic disaster.

On Sunday night, my mother had just gone to bed, it seemed, when she was awakened by the engines stopping; then she heard a pounding noise above our cabin...our cabin steward came, and she asked him, and he said to tie on her life-belt and come, that the ship was sinking; so she awakened me, and we all put on our shoes and stockings and our coats over our night-clothes, and went to the upper deck. We heard them sending off rockets for help, and the band was playing. Soon an officer came and told us to all come and get into the life-boats. We went. My mother, brother, and sister got into one life-boat, and then they said it was all for this boat, so my mother told me to get into the next one....The Titanic  was sinking lower and lower. We could see the port lights go under one by one until there was an awful explosion of the boilers bursting, and then the ship seemed to break right in the middle, and, after a bit, go down. When it did go down, we heard terrible screams and cries from the people that were going down with the boat. Suddenly, in the early morning, we saw a faint green light...on the rescue ship Carpathia...I was so worried about my mother. After a while though, I found her in the second-class dining-saloon, trying to find me, with my sister and brother. My, but I was glad to see her! The women were hunting for their husbands, and when they could not find them, they knew they had gone down with the Titanic. It was an awful sight!

I seldom see letters from Russia, so I thought I would write to you. I am a pupil of the Imperial Lyceum in St. Petersburg. I am staying for my health in the Crimea, at the port of Yalt, eighty-two versts from Sebastopol...The Emperor has a palace called Livadia, about two versts from Yalt; almost every day we see some of the imperial family driving about. Yesterday there was a grand bazaar, at which was present all the imperial family. The Empress and the four Grand Duchesses, her daughters, presided at different stalls. I went to buy at the stall of the Empress, and had the honor of receiving something from her own hands, of which I was very proud...My eldest sister, who is now married to the Russian naval attache in Washington, took you when she was a girl. I am taking you for the third year, and enjoy all of you.

Stephanie Liang graduated from the University of Pittsburgh with a degrees in English Literature and Economics. Her ASRA research with the Nesbitt Collection contributed to her undergraduate research paper, Child Participation in St. Nicholas Magazine and Robert Merry's Museum and What It Revealed about Adult Notions of Childhood in the 19th Century.