This research guide describes some of the major print and electronic resources for finding Census statistical information from the U.S. Census Bureau. 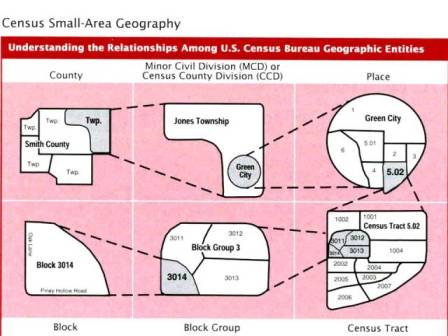 Counties and equivalent areas are the primary divisions of most states, Puerto Rico, and the Island Areas. They include counties in 48 states; parishes in Louisiana; boroughs and census areas in Alaska; municipios in Puerto Rico; independent cities in Maryland, Missouri, Nevada, and Virginia; and other entities in the Island Areas.

Places are concentrations of population such as cities, that have legally prescribed boundaries, powers, and functions. Other population centers without legally defined corporate limits or corporate powers are defined by the Census Bureau in cooperation with state officials and local data users. These are called Census-Designated Places (CDPs) and are identified in data tables by the acronym CDP following the place name.

Census tracts generally contain between 1,000 and 8,000 people with an optimum size of 4,000 people. Census tract boundaries are delineated with the intention of being stable over many decades, so they generally follow relatively permanent visible features. However, they may follow governmental unit boundaries and other invisible features in some instances; the boundary of a state or county is always a census tract boundary. Block Numbering Areas (BNAs) are now called census tracts. Census tracts are probably the most commonly-used geography by statisticians and policymakers.

Block groups are statistical divisions of census tracts, and generally contain between 600 and 3,000 people. They are a collection of census blocks within a census tract, sharing the same first digit of their four-digit identifying numbers.

Blocks are statistical areas bounded by visible features, such as streets, roads, streams, and railroad tracks, and by nonvisible boundaries, such as selected property lines and city, township, school district, and county limits and short line-of-sight extensions of streets and roads.

The Standard Hierarchy of Census Geographic Entities (also available as a PDF below) shows the many geographic types for which data are available from the U.S. Census Bureau.

With connecting lines, the diagram shows the hierarchical relationships between geographic types. For example, a line extends from states to counties because a state is comprised of many counties, and a single county can never cross a state boundary.

If no line joins two geographic types, then an absolute and predictable relationship does not exist between them.

For example, many places are confined to one county. However, some places extend over more than one county, such as New York City. Therefore, an absolute hierarchical relationship does not exist between counties and places, and any tabulation involving both these geographic types may represent only a part of one county or one place.

Notice that many lines radiate from blocks, indicating that most geographic types can be described as a collection of blocks, the smallest geographic unit for which the Census Bureau reports data. However, only two of these lines also describe the path by which a block is uniquely named. That is, the path through the Block Group or through the Tribal Block Group.