Some files contain photographs of accident scenes, accident recreations, or the deceased. Many accident sites and reenactments can be found in files pertaining to industrial accidents, which provide insight into the dangers of working in these environments. Railroad companies and Carnegie Steel are represented in these photographs. Photos of the deceased tend to appear mainly after 1950 and are often of injuries or the autopsy.

It is interesting to note that the presence of photographs declines significantly during the period of the Great Depression.  Also, because the files were tri-folded for a significant amount of time, most of the photographs are in poor condition.

Autopsy reports begin to appear within Case Files as a one to two typed page description of the external and internal features of the deceased's body, noting any abnormalities or injuries. As records became standardized a formal autopsy form was created. In addition to providing space for describing the body, there is also a human outline which allows the examiner to draw in or note particular injuries.

This form is completed by a police officer to describe a criminal incident or an officer's actions that resulted in a death. The time of the incident, identification of the patrol car or policeman that responded to the scene, and information pertaining to any ensuing trial are usually present.

The Affidavit form is a general form that provides space for someone to write information pertaining to the deceased. Often this form is utilized to collect a witness's account of an accident, but it can also be completed by friends or family members of the deceased to provide background information on their health or living conditions that may have contributed to their death.

On rare occasions an Affidavit form may also be completed by a person accused of killing the victim. Their statement provides their account of the events surrounding the death and can include a confession.

Beginning in 1929, there was an emergence of a new form in the coroner files.  The Physician's Report to Coroner form replaced the small notes from doctors, often written on prescription pads of office stationary, that were typically pinned to the press report. The emergence of this form shows the beginning of standardization between the medical community and coroner's office. 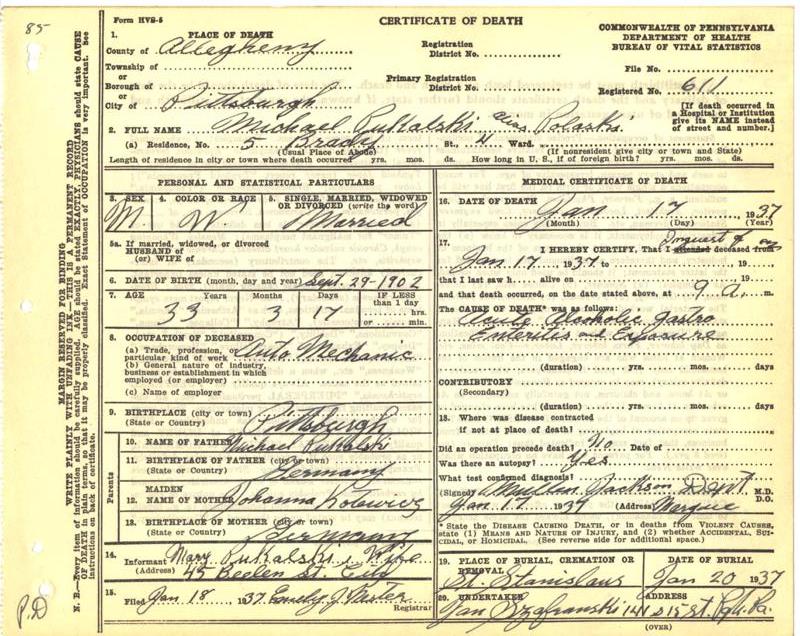