Altmetrics can be a valuable tool for showcasing the story of your research in your professional profile.
This page provides some inspiration on using altmetrics in a variety of academic contexts.

An increasing number of researchers are using altmetrics to help document the varied impacts of their work in their CVs, tenure & promotion dossiers, and grant and job applications. When using altmetrics to document your research’s influence, keep in mind that context is very important for making the numbers you list meaningful. Provide contextual information like percentiles and maps that communicates to your viewer how your paper or other research output has performed relative to others’ papers/outputs.

TIP: Rather than include raw counts of your article's metrics, like this:

...it is more effective to provide contextual information that communicates to your viewer how your paper or other research output has performed relative to others' papers/outputs, as in the entry below:

TIP: Qualitative data is also a good way to provide context for the attention your work has received. You can find full-text mentions of your work using altmetrics services like PlumX at Pitt, and include them in your website, CV, or dossier like so:

Author, A. (2015). "Title." Journal name. doi:10.000/10.100x Paper covered by more than 100 media outlets worldwide, including The Wall Street Journal and The Guardian. Recommended on 12 research blogs, putting it in the 99th percentile of Biology publications published in 2015. Was described as "a breakthrough study on examples" by prominent genetics and evolution researcher Rosie Redfield.

Altmetrics in CVs and Resumes

Here is an example of how altmetrics information has been included in CVs and Resumes. Note how each writer gives some context for the metrics instead of raw numbers or scores.

Altmetrics in Tenure and Promotion Portfolios

Altmetrics in your promotion & tenure dossier

If you do choose to use altmetrics in your dossier, keep in mind that it's best to be selective with the metrics you plan to include. It's much more effective to include metrics that showcase the types of impact you're looking to document, rather than taking a "kitchen sink" approach (which might overwhelm your reviewers with numbers).

For example, if you're looking to document your public outreach & engagement initiatives, you can include how often your work has been mentioned in the press and on Twitter, the pageview statistics for your lab's blog, and the citations your articles have received on Wikipedia. If you want to document the scholarly impacts of your work, you can include the number of citations you've received, how often your work is bookmarked on Mendeley (and by what demographics), reviews of your work on Faculty of 1000, and so on.

Schedule a consultation with us to help navigate the tools available to you!

Promotion & tenure preparation guidelines rarely include instructions on how to use impact metrics. Or, when they do, the guidelines usually only address citation metrics or, worse, recommend using journal impact factors.

These instructions often also lack guidance on how to make the metrics meaningful. For example, what does it mean if a tenure candidate says he received 5 citations for a paper published in 2013? Whether that's a good or bad number is often dependent upon the average citations that others in his field receive, and also the year the paper was published (as older papers tend to have more citations, by virtue of just being around longer).

There's an obvious need for clear and objective instructions on how to use impact metrics in tenure & promotion dossiers. And there's also a need for guidelines to help dossier reviewers make sense of the numbers.

A small but growing number of universities include altmetrics in their tenure & promotion preparation guidelines. Some examples include the University of Colorado Denver Medical School (PDF; page 84) and IUPUI (see: "The Guidelines for Preparing and Reviewing Promotion and Tenure Dossiers").

If you're interested in updating your university promotion & tenure guidelines to better document the use and interpretation of impact metrics, contact your faculty senate (or similar organization) to learn more about how that might work on your campus. You might also get in touch with your Vice Provost for Faculty & Academic Affairs (or similar campus office that oversees the writing of such guidelines).

Ahmed is an Associate Professor in the Department of Biology at American University in Cairo, Egypt. His tenure dossier is available in Google Drive.

He used altmetrics data in his tenure dossier in two interesting ways. First, he included a screenshot of his most important scholarly products, as they appear on his Impactstory profile, to summarize the overall influence of his work:Note the badges that summarize in a glance the use of his work among both the public and other scholars. Ahmed also includes a link to his full profile, so his reviewers can drill down into the attention details of all his works, and also review them for themselves.

Ahmed also showcased the scholarly reuse of a particular software package he created, JAligner, by including a link to a Google Scholar search that showcases all the scholarship that cites his software:

As of August 2013, JAligner has been cited in more than 150 publications, including journal articles, books, and patents, (http://tinyurl.com/jalignercitations) covering a wide range of topics in biomedical and computational research areas and downloaded almost 20,000 times (Figure 6). It is somehow noteworthy that JAligner has claimed its own Wikipedia entry (http://en.wikipedia.org/wiki/JAligner)!

Ahmed received tenure with AUC in 2013.

Steven is an Associate Professor in the School of Aquatic & Fishery Sciences at the University of Washington. He decided to use altmetrics data in his tenure dossier to two ends: to showcase his public engagement and to document interest in his work.

To showcase public engagement, Steven included this table in the Education and Outreach section of his dossier, illustrating the effects his various outreach channels (blog, Facebook, Flickr, etc) have had to date - and you can read more at his blog. 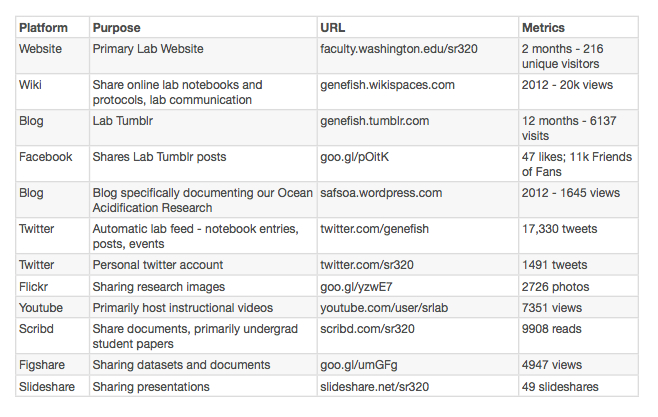 For evidence of the impact of specific products, he incorporated metrics into his CV like this:

Steven’s bid for tenure was successful.

​Altmetrics can showcase your broader impacts

Funding agencies like the NSF are increasingly asking researchers to document the "broader impacts" of their work. Altmetrics are a good way to do that, as they can help you find and explain how your research is being used by other researchers and the public.

When reporting back to Sloan on the success of her project, she included metrics like the Figshare views that related posters and talks received, Github statistics for the Phinch software, and other altmetrics related to the varied outputs that the project created over the last few years.

Holly’s hopeful that these metrics, in addition to the traditional metrics she’s reported to Sloan, will make a great case for renewal funding, so they can continue their work on Phinch.

Some more examples from blog posts

Credit for this Section

Much of the material in this section was originally posted on the Altmetrics Libguide from the Duke University Medical Center Library and Archives.

Some example text was originally from "What are Altmetrics?", licensed under a CC-BY license.