Need help with formatting citations? Use this brief guide to five major styles.

The 9th edition of the MLA Handbook was published in 2021. In this update, the format for both in-text and Works Cited citations is the same as the 8th edition. The 9th edition also includes this clarification on citing a film/DVD.

A film/DVD:
Generally list film directors as key contributors in the Contributor element

With MLA style, you must include a Works Cited page at the end of your paper. A Works Cited page is an alphabetical listing of the resources cited in your paper. Below are some examples of MLA style citations. Note: Some instructors may require access dates for websites or other pieces of information. Please check with your instructor if you have any questions. 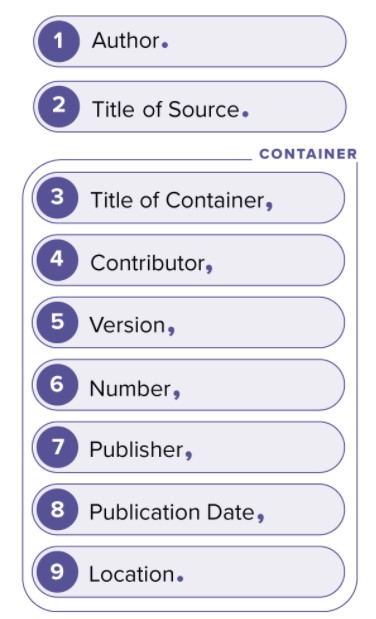 The Modern Language Association, the authority on research and writing, takes a fresh look at documenting sources in the eighth edition of the MLA Handbook. Works are published today in a dizzying range of formats. A book, for example, may be read in print, online, or as an e-book--or perhaps listened to in an audio version. On the Web, modes of publication are regularly invented, combined, and modified. Previous editions of the MLA Handbook provided separate instructions for each format, and additional instructions were required for new formats. Starting with the 8th edition of its best-selling handbook, the MLA recommends instead one universal set of guidelines, which writers can apply to any type of source.   (Source: MLA)